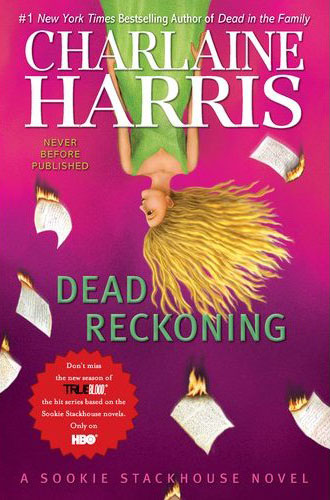 If you are a fan of True Blood but haven’t read the Sookie Stackhouse books on which the show is based, then you are missing out. Despite what you may have heard, they are not just for Romance fans. Author Charlaine Harris rivals J.K. Rowling in maintaining a large cast of memorable minor characters who not only allow her to keep developing unexpected twists and turns in the plot, but also lend an authenticity to the fictional town of Bon Temps, LA. Nearly everyone is someone Sookie went to high school with, or a cousin of the sheriff, or an ex-boyfriend of the person who runs the hair salon, etc, etc. They’re all interconnected very realistically for a small town and their small subplots add depth to each book, even just in the small details like Maxine Fortenberry’s famous chocolate cake, or the drunken Jane Bodehouse who hangs out at Merlotte’s. The waitresses and bartenders at both Merlotte’s and the vampire bar Fangtasia come and go regularly, bringing with them new background stories and new connections that reveal details about other characters.

Harris’s writing is light and clever, often very funny in a much less dark way than True Blood. There is a lot of action in the books, but much less gore and no one is having sex in the blood of someone they just killed, or twisting someone’s head around while they’re having sex with them. (Sometimes the show makes me squirm.) The books are also surprisingly astute about relationships and the complications that come with the territory. I say ‘surprisingly’ because Romance novels have that stigma, at least for me – who admittedly hasn’t read any others* – of being all about fantasy sex. Harris creates pretty well-developed relationships for Sookie, who keeps a no-nonsense attitude in the midst of flirtations from apparently very hot supernatural creatures. She is non-judgmental, adventurous and open-minded, all the while still worrying about minding her manners, making her deceased grandmother proud, respecting herself, and trying to be a ‘good Christian’, despite fearing that killing people in self-defense or defense of loved ones may have already cost her that.

It is this instantly likeable character of Sookie in Harris’s books that really sets them apart from True Blood – the creators of the show invented a new Sookie, and I’ve yet to see any advantage from it. The True Blood Sookie is not nearly as kind or as smart as her literary counterpart. She also constantly needs help from her supernatural friends or boyfriends, while in the book, she often defends herself. The strangler Rene in Dead Until Dark/Season 1? The vampire Lorena in Club Dead/Season 3? Sookie kills them by herself, thank you very much. She survives many skirmishes and all-out battles, and definitely sustains major injuries, but she comes out of them all, still compassionate and still believing in doing the right thing.

She’s also supposedly on the plump side in the books and worries a little about her weight; she uses Sun-In in her hair; she tapes Jeopardy. The sex scenes between her and Bill first, and then later Eric, (the latter is a whole lot more likeable in the books as well) are more hilarious than graphic. Harris gives us a healthy dose of Sookie’s life outside of the supernatural, including trips to the library, making food for family members or guests stopping by, working in the garden, tanning (while acknowledging that she’ll regret it later), worrying about money and how she’ll be able to replace the hot water heater. It’s very absorbing to read all this in between the vampire politics, mysterious murders and the various forces that threaten Sookie for being involved with ‘supes’. Her involvement is due to a telepathic ability that she has considered a curse all of her life, but to the ‘supes’ is a valuable gift. …Not just because she laid eyes on a handsome vampire and stopped caring about anything else (I’m looking at you, Bella).

In Dead Reckoning, Harris’s humor involves more pop cultural references, and is a wee bit cheesier, but the story is still satisfying. Those of you who live for the Eric sex scenes will be a little disappointed but fans of Bill will get a kick out of a scene where Sookie is forced to hide with him underneath his house.

Sookie discovers a secret left behind by her grandmother that reveals more about her fairy blood, and also a clue why her fairy cousin and great-uncle insist on hanging around her house. She finds out that Eric has an upsetting order hanging over his head from his dead maker Appius (not Godric, like in True Blood, and quite a scary character), and that smartass Pam is capable of loving a human. She is plagued by the vengeful Sandra Pelt, the sister of the were that Sookie killed in self-defense, and all of them are at their wits’ end over Victor Madden, the sadistic representative of the Nevada vampire king that took over Louisiana.

*Actually, I read about half of Outlander, which isn’t even categorized as Romance, and had to put it down because the whole plot seemed to be about getting the characters into sexual situations.

Simone Snaith writes young adult and fantasy novels, and sings in the band Turning Violet. A fan of scifi, fantasy, the supernatural and most things from the '80s, she enjoys reviewing music, books and movies. You can read about her own books at simonesnaith.com.
View all posts by Simone Snaith →
This entry was posted in Books and tagged book review, charlaine harris, dead reckoning, romance, sookie stackhouse, true blood, vampires. Bookmark the permalink.