Beat Reader Contest! Win An Autographed Print From “Mike Watt: On And Off Bass” 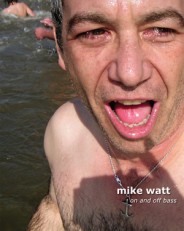 Regular readers of Beat already know that bassist Mike Watt has a talent for photography. But if one pic a week isn’t enough for you, we heartily recommend you pick up a copy of mike watt: on and off bass, coming in May from Three Rooms Press.

The title is interesting, because there are no photos of Watt or any other human beings playing bass or other instruments in the book. Instead, it’s a pretty stunning collection of  Nat Geo-worth pics of pelicans, seals, and fantastic landscapes captured from his kayak in the LA harbor, accompanied by selected entries from his tour diaries and a few poems. The editors state in the introduction that “it is that juxtaposition of notes from the road and photos of his home base that led to the creation of mike watt: on and off bass.”

The book is available for pre-order starting tomorrow, April 1. Watt will also be reading from the book, signing copies and performing with his trio the Missingmen on Saturday, May 5 at 2pm for Cinco De Mike Watt  , the official West Coast launch party, at Beyond Baroque. Also appearing will be Jack Brewer and S.A. Griffin’s literate-rock project the Lofty Canaanites. The book will be available for sale, along with original prints from Track 16 Gallery, which sponsored the original exhibit that inspired the book.

But LA Beat readers will have the opportunity to win one of these coveted prints, autographed by the artist. Just leave a comment at the bottom of this piece with your favorite Watt thing. It could be a favorite song, a memory of seeing him play live, something funny he said from the stage one night, your favorite Pic Of The Week, a story about running into him at a Frankie Goes To Hollywood show, anything at all. You’ll have to sign in with your email address but we’ll keep it confidential and never use your information for other purposes. Five winners will be chosen at random. Deadline for entries will be Sunday, May 6 and winners will be announced on May 7.

See also our Spielgusher review and our photo gallery/ CD review with the first photos of fIREHOSE in 2012.

UPDATE: Winners have been privately notified with the exception of commenter Salley, whose email address given has failed twice. If you are Salley, please write to me at bobzilla77@gmail.com and be sure to include the email address you originally gave us so we know it’s you.

This entry was posted in Books, Music. Bookmark the permalink.

41 Responses to Beat Reader Contest! Win An Autographed Print From “Mike Watt: On And Off Bass”