Please note: titles released only in DVD format are listed in italics, while Blu-ray and Blu-ray/DVD combos are in italics and bold font. 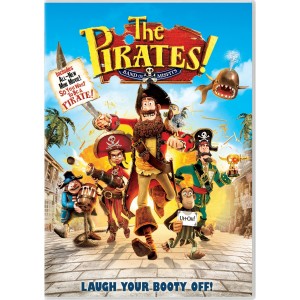 Though not as consistently enjoyable as some Aardman Animations’ previous efforts (like the Wallace and Gromit and Creature Comfort shorts and the feature-length Chicken Run), The Pirates! Band of Misfits is a clever adult comedy masquerading as children’s entertainment. Based loosely on the first book in author Gideon Defoe’s popular series of comic period adventures, the film is a breezy broad comedy about an inept Pirate Captain (voiced by Hugh Grant) who attempts to turn around his crew’s standing among buccaneering circles by claiming the coveted Pirate of the Year award. Aiding him in this endeavor is a hapless crew voiced by, among others, Martin Freeman, Anton Yelchin and Al Roker, of all people; Salma Hayek, Jeremy Piven and Lenny Henry are his chief opposition, while David Tennant and Imelda Staunton are Charles Darwin and Queen Victoria, respectively. The gags are plentiful, very British and frequently very funny, and thankfully avoid the potty jokes and pop culture references (save for the use of songs by the Clash, Tenpole Tudor and Supergrass) that seem to form the backbone of many Stateside animated features. It’s hard to imagine a DreamWorks animated effort that would reference Charles Darwin, much less draw its biggest laughs from his sidekick, an educated chimp who is clearly the smarter of the two (I imagine that wouldn’t play well in the fly-over states). The DVD includes an amusing “training” video for future pirates hosted by Grant’s Captain, as well as commentary by the filmmakers.

As for the rest of the week’s offerings, I will simply say the following – Battleship (Universal), Think Like a Man (Screen Gems) and The Lucky One (Warner Bros.) – and add that if any of these appeal to you, they are ripe for the picking this week. 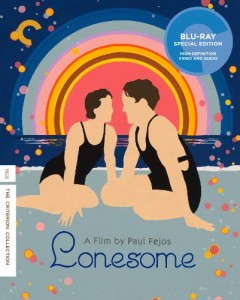 The lovely, long-lost Lonesome (Criterion) is both a charming romance and a bittersweet reminder that making a connection with another human being remains as hard today as it was when this mostly silent feature was released in 1928. Hungarian director Paul Fejos pulls out all the technical stops to gild his picture, from superimposition and color tinting to brief “talking” sequences, but the core of the film, a chance encounter between two lonely individuals who briefly escape the drudgery of their modern lives to meet at the Fourth of July festivities on Coney Island (which looks absolutely stunning in its heyday), fall in love and are then separated, remains the true jewel at the core of the film. Forgotten, like nearly all of Fejos’ work, by all but the most ardent of silent film scholars, Criterion’s Blu-ray not only rescues Lonesome from obscurity, but offers a crash course on Fejos himself, who left Hollywood to study anthropology, through an audio biography he recorded in 1963, as well as the inclusion of two additional films he directed: the silent drama The Last Performance (1929) and Broadway (1929), a lavish Technicolor talking musical reconstructed from surviving film and audio elements.

Also from Criterion is Maidstone and Other Films by Norman Mailer, a three-film set featuring the literary lion/provocateur’s experimental turns behind the camera in the 1960s and early 1970s. If you know anything about these justifiably obscure efforts, it’s probably the infamous final moments of 1970’s Maidstone in which actor Rip Torn attempts to provide a dramatic conclusion to Mailer’s improvisational ramblings by bashing him on the head with a hammer before engaging in a vicious and very real fight. That moment remains the highlight of this set, not only for its burst of holy-shit-is-that-happening energy, but also because it offers a break from Mailer’s onanistic self-fascination, which runs rampant through not only Maidstone but the gangster fetish-fantasy Wild 90 (1967) and Beyond the Law (1968), a police meta-drama buffeted by amusing turns by Torn and George Plimpton. All three remain curiosity pieces for Mailer enthusiasts, obscurity cultists and vanity project habitues. 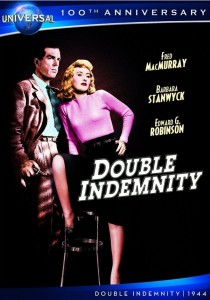 popular vault titles, including Alfred Hitchcock’s The Birds (1963), Psycho (1960) and Vertigo (1958); Billy Wilder’s Double Indemnity (1944), the noir by which all others should be measured; the James Stewart comedy Harvey (1950), currently enjoying a revival on Broadway this season; Abbott and Costello Meet Frankenstein (1948), the best of the comedy team’s late-career monster rallies; Airport (1970), which launched a slew of big-budget, star-filled disaster pics; and a slew of newer efforts, including Scarface (1983), Sixteen Candles (1984) and Eternal Sunshine of the Spotless Mind (2004). Most, if not all, include bonus features, including commentaries and making-of featurettes, and probably represent the best presentation of these films (until the next home video format comes along). Not to be outdone, New Line also unleashes the entire 15-disc extended edition of its Lord of the Rings trilogy on Blu-ray this week. If you start watching everything in the trilogy right now, you’ll be just about done by the time The Hobbit comes out.

The Revival House Pick to Click this week, however, is Criterion’s Blu-ray of Quadrophenia (1979), director Franc Roddam’s raw youthquake drama which, like the 1973 Who album of the same name, draws its emotional impact from the real-life clashes between mods and rockers in an early 1960s Britain poised on the brink of becoming undone by its youth. The Blu-ray presentation features a new digital transfer of the uncut version of the film, as well as the original 2.0 stereo soundtrack and a new 5.1 surround mix. There’s also a new commentary by Roddam and cinematographer Brian Tufano and interviews with members of the Who camp, including co-producer/manager Bill Curbishley and sound engineer Bob Pridden, but the real prize is a wealth of archival extras, including a pair of television news reports about the mod movement from French TV, which includes some very early performance footage of a then-teenaged Who at the Marquee Club circa 1965. 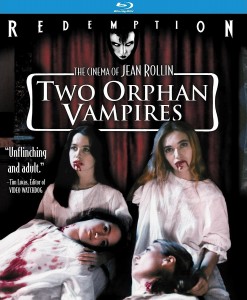 have released two lesser-known titles from the surreal c.v. of French director Jean Rollin. The Living Dead Girl (1982) is an explicitly gory zombie thriller about a recently deceased young woman brought back to life by a chemical spill that imbues her with a taste for flesh and blood. In typical Rollin fashion, the film manages to be something of a melancholy affair, with Dead Girl Francoise Blanchard growing increasingly repulsed by her own existence, and best friend Marina Pierro discovering that their renewed relationship now includes murder as a means of keeping Blanchard alive. 1997’s Two Orphan Vampires, based on a series of novels penned by Rollin, is a lesser effort, marred by budgetary restraint, but the core idea, about a pair of blind young women in an orphanage who become vampires after dark, retains many of the director’s signature motifs. Both Blu-rays include archival interviews with Rollin, who died in 2010, as well as  a brace of trailers and interviews with key personnel on the films, including special effects creator Benoit Lestang, who began his career while still a teenager on Dead Girl before graduating to features like City of Lost Children and Brotherhood of the Wolf.

Somewhat more genteel Continental drive-in fare is available from Warner Archives, which has an array of ’60s-era sword-and-sandal titles on deck for those who fondly remember the Italian-made costume epics from endless Saturday afternoon TV 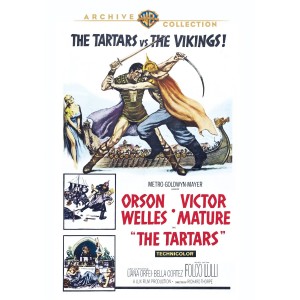 broadcasts. American bodybuilder Steve Reeves, who rose to fame as Hercules in 1959, is top-billed as Sandokan the Great (1963), the Indian hero of Italian pulp adventure fame who made his screen debut with this early feature by the prolific Umberto Lenzi (Spasmo, Make Them Die Slowly). Reeves also turns up as the son of Spartacus in The Slave (1962) by Western specialist Sergio Corbucci (Django), while Italian strongman Kirk Morris takes over as Hercules in Hercules, Samson and Ulysses (1963), which pits the three heroes against not only the Philistines but also a sea monster. Guy Williams of Lost in Space fame is front and center in Damon and Pythias (1962), which offers a fast and loose retelling of the Greek legend, while Viking chief Victor Mature squares off against Tartar overlord Orson Welles in The Tartars (1961), directed by ’30s-era Hollywood action specialist Richard Thorpe (The Prisoner of Zenda, 1937). Another ex-pat filmmaker, Andre De Toth (House of Wax) was uncredited as co-director of Gold for the Caesars (1964), an overripe drama about a Gallic slave (Jeffrey Hunter, one-time Jesus in King of Kings) leading an expedition to find gold for his Roman oppressors. Italian horror specialist Riccardo Freda also went uncredited for his co-directorial efforts on the film.

Those seeking some more high-voltage European action can check out Volume 7 of Blue Underground’s Midnight Movies double features, which pairs Sergio Sollima’s ultra-violent Revolver (1975), with an amped-up Oliver Reed on the trail of kidnappers who have taken his wife, with Grand Slam (1968), a fizzy caper picture with Edward G. Robinson leading a team of thieves (including Adolfo Celi and Klaus Kinski) in a plan to steal diamonds from a bank in Rio with the help of Janet Leigh. Volume 6, by the way, moves the action to North American for Roger Corman’s Cannonball (1976), an outlaw road race thriller directed by Paul Bartel (Eating Raoul) and starring David Carradine, with cameos by then-current Corman employees Sylvester Stallone, Martin Scorsese and Joe Dante. It’s paired with Fast Company (1976), a downbeat racing drama by David Cronenberg and starring William Smith and the late Claudia Jennings. Then Volume 5 heads back to Italy for Luigi Cozzi’s gooey Alien carbon Contamination (1980), which gets paired with a fairly dire, in-name-only take on The Shape of Things to Come with Jack Palance in heavy-breathing overdrive. 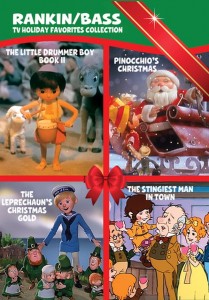 era variety shows as The Ed Wynn Show and The Paul Winchell and Jerry Mahoney Show, which features the irascible ventriloquist and his equally oddball dummy. There’s also a brace of Westerns in Death Valley Days, and Do You Trust Your Wife? a proto-Newlywed Game hosted by Johnny Carson and emceed by Ed McMahon. Warner Archives, in the meantime, unearths four rarely-seen animated specials by Rankin/Bass, the folks behind Rudolph the Red-Nosed Reindeer and Frosty the Snowman. The Rankin/Bass TV Holiday Favorites is a bit presumptuously titled – few, one imagines, have been pining for The Stingiest Man in Town, a musical Christmas Carol featuring the voice of Walter Matthau, or The Leprechaun’s Christmas Gold, with Art Carney, but even these lesser efforts pack a heady dose of stop-motion-stoked, kid-Christmas nostalgia, even in the depths of the September heat.

Paul Gaita lives in Sherman Oaks, California with his lovely wife and daughter. He has written for The Los Angeles Times, LA Weekly, Variety and The Fix, among many other publications, and was a home video reviewer for Amazon.com from 1998 to 2014. He has interviewed countless entertainment figures from both the A and Z lists, but his favorites remain Elmore Leonard, Ray Bradbury and George Newall, who created both Schoolhouse Rock and the Hai Karate aftershave commercials. He once shared a Thanksgiving dinner with celebrity astrologer Joyce Jillson, and regrettably, still owes the late character actor Charles Napier a dollar.
View all posts by Paul Gaita →
This entry was posted in Movies, Music, Television. Bookmark the permalink.