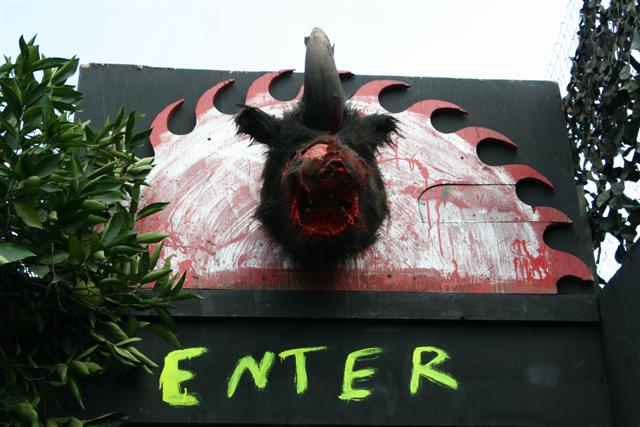 For me every day is practically Halloween, but by the time October rolls around I am positively manic trying to pick and choose my thrills and chills.

Universal Studios: Universal is very good usually. I have not been this year. Monsters get in your face. Tons of chainsaws and movie set quality mazes that have lots of creativity. It’s almost $60 on some nights and without a fast pass upcharge some lines can be as long as an hour and 15 minutes.

Knott’s Scary Farm: Knotts fortieth haunt is a good value with a wide mix of mazes and rides but with the exception of the extra cost interactive maze “Trapped.” They seemed to have toned the monsters down more to a family level or for those who scare easily, and they have abolished the noise scares except for the Ghost Town Sliders who rock. No chainsaws anywhere.

Magic Mountain: Haven’t been to Magic Mountain in a couple of years and their mazes usually suck, and cost ten extra for season pass holders unless you buy a discount package with a coke can. Insiders say that this year they stepped up their game a bit to compete with other parks. But for me the real thrill is riding the coasters in complete darkness, including Colossus backwards.

Queen Mary: If you order online and arrive early you can have an affordable and not too crowded time at the Queen Mary. It’s not the best haunt around but it is haunted and the mazes are fun and startling, and you get six of them plus bands and stuff. A value…”

In the valley, Reign Of Terror in Chatsworth at a mall above Golds Gym is an all volunteers charity based event that usually earns big kudos from the Socal Haunt afficinados. A stand alone attraction, this reasonably priced fifteen dollar scare fest has sets every bit as good as Knotts or Universal, and the talent is pretty agressive. The themes are pretty standard like Insane Asylum or Hillbilly Hell, but done creatively and not just relying on the rote tricks of the trade. They usually throw some gross out humor along the way.

The Harvest Festival at Pierce College has a pretty good family-style package with country music and BBQ and pumpkin patch and games in the daytime and then when the dark descends they open the Large Corn Maze, the Creature-filled Corn Maze and the Factory Of Nightmares walk-through maze.The Haunted Corn Maze is the best of the lot but it’s also a good middle of the road event for kids and teens who scare easily.

Not far from Boney Island on Pepper Street is the Backwoods backyard home haunt, now in it’s 8th year or so. Lots of creative high startle scares here and scenes of gore but the kids loved it except for the one ten year old girl who came out crying. That’s OK, Honey, I cried too the first time I saw it. This year the cannibal hillbillies have been hit with an apocalyptic contagion and the end of the world Kentucky-style is very in your face. It’s free and even better than the post nuke maze we saw at Knotts this year. No required fee but do these guys a solid and put a few bux in the donation box. They worked their rotten hearts out.

Although reports are that this year is their best yet, for my money the Haunted Hayride in Griffith Park is way too expensive for what you get. It’s pretty creative and it’s fun and funny and kind of romantic to snuggle in the straw but it’s way too short and not cheap. The lines can sometimes get up to 90 minutes long. Basically I think it’s appeal lies in the fact that the hay ride is mostly an east coast and midwest thing and relatively new to SoCal. In any case the road through Griffith park last night was packed. My favorite aspect of it is a merry go round of skeleton horses that go back wards and it’s free with the hay ride.

A serious but fairly exhorbitant phenomenon of late is the extreme or interactive haunt or terror experience. Lovers of Saw or Hostel should flock to these. Usually you have to perform a series of puzzles or icky challenges to progress through the rooms of these haunts. Sinister Pointe in Brea is a good one to start with. Do you think you have the guts to stick a knitting needle into an electrical socket along with two others at the same time? Then this maze is for you. Plus you get some gross toilet humor and pervy insults along the  way. There are multiple paths too, but a once through is only about 15 smackers.

The most popular of these and the cheapest, as it only cost 2 cans of food for the homeless, is a home haunt in San Diego called Mckamey Manor. I’ve been trying to get there for weeks but they keep shutting it down for TV crews to shoot specials and they are only open from from 7 pm to ten pm with 30 minute tours leaving every few minutes on Fridays and Saturday as it’s rather peaceful neighborhood. Surprisingly this place has got gags that rival any theme park plus a few surprises you won’t find at Disneyland, which is fun at this time of year but they jack up the prices. Explore the haunted leper ship and get doused by buckets of water or get hand cuffed to a overhead drain pipe while leather face cuts his way through a wall and then accosts you while you are unable to escape. Don’t worry it’s safe. Next year this place goes pro and insurance policies may force them to tone it down. BTW you must sign a waiver to enter.

Lastly, if you got the bucks for a road trip and you feel like eating a buffet or throwing your hard earned cash down the pooper head to the las Vegas strip to experience Eli Roth’s haunted experience, The Goretorium. People have been tight lipped about what’s inside but it’s about forty for a forty minute maze and you can see clips of celebs getting the crap scared out of them on youtube. It’s a very gory and intense scare according to my friend who works there as a maniac and the catch phrase is The Goretorium: You’re F*cked!
Family-Friendly

For the family and lovers of creepy artwork especially Disneys Haunted Mansion type stuff is the Los Angeles Live Steamers in Griffith Park next to Travel Town on Zoo drive. Open on weekends from now until Halloween and on Oct 31st. these classic scaled down models owned by railroad enthusiasts and historians take you on a black light eye candy filled trip with tons of creepy and humorus scenarios with no pops out to scare the little ones. This uber cool 20 minute ride often attracts the “Goth Crowd who may or may not have children so if you are childless my advice to you is to get there @ 9:30 30 minutes before closing on either Friday or Sunday when most of the crowds are leaving. Last night they had a crowd of exactly 1052 visitors. The price is a ten dollar donation and we got to see live deer stumble in and race around the tombstones. Oct 31st early is good too because all the little ones are out trick or treating. A classic.”

Starting on the 2oth and going through subsequent weekend until the big candy day is Boney Island, a fantasic and whimsical trip to a theme park run by and inhabited by animatronic skeletons. not only is this free but it’s built by a former producer of the Simpsons so expect some wild buffonery to accompany the ten minute computer run glow in the dark dancing waters. By a T shirt or something to support charity. Not to be missed..

Yes, folks there is no shortage of ghoulish things to experience this season in the town that holds a semi permanant spot for Halloween year round. Check some of the great Face Book and net sites like Creepy L.A., Bizarre Los Angeles, Hollywood Gothique and Home Haunters. Tons of free home stuff and cemetery tours appear the last week of October and Halloween night plus lots of groovy film festivals and club shows. I will be appearing with my new band the Undead Kennedys @ a Zombie Crawl in (Maybe) on the 20th, The Three of Clubs Zombie prom on Oct 25th on Vine St., The Log on Oct 25th on Vine St. The Long Beach Zombie Walk on Oct 27th,The Redwood Bar and Grill in Down Town L.A. On Oct. 30th and the Ruby Bar in San Diego on Nov.8th. Too poor or Housebound to attend these events? QUit yer belly aching and have a 99-cent store costume party and pot luck or invite friends over for a horror movie couch fest, ya slag.

Have a horrible time,
Dukey Flyswatter

Dukey Flyswatter, (AKA Michael), is a native Angeleno with strong roots in the underground scene since the 70's. He is a screenwriter (Blood Diner, Star Slammer), actor(Surf Nazis Must Die, Betty Page:Dark Angel, etc.), freelance writer. He is best known for his Horror Metal rock group, Haunted Garage, which he founded in the 80's and has now reformed, with him taking his usual role as lyricist and singer.
View all posts by Dukey Flyswatter →
This entry was posted in Attractions and tagged ahunted houses, backyard hauntings, dukey flyswatter, Halloween, home hauntings, horror. Bookmark the permalink.