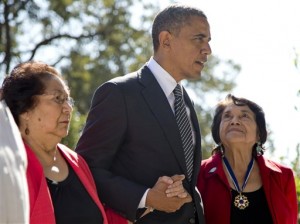 With the media arriving bright and early (some as early as 6 a.m.) the press shuttles did a brisk business of departing to the event site every 30 minutes, beginning at 6:45 a.m. until 9:15 a.m., with final media access at 9:45 a.m. More than a few press wore a frown as security directed them to park their cars on a dirt lot located at the end of the road; a lot that by 8 a.m. was already over-crowded.

It seemed that the entire Central Valley – and a good part of Los Angeles too – was waiting for our president, holding their breath. Unfortunates who arrived after 10 a.m. (many from the Los Angeles area) were either turned away by security or forced to park MANY miles away in downtown Keene and take a taxi back to the National Chavez Center in Villa La Paz. More frowns.

Meanwhile, back in Bakersfield…

The International Terminal main entrance began filling up with the local press by 7 a.m. sharp, who began their pre-sets from 7:00 a.m. – 8:00 a.m., having no access to equipment from 8:00 a.m. – 9:00 a.m. As this commenced, airport security quickly walked about, loudly announcing: “Members of the media who wish to cover Air Force One’s departure must arrive during the media access time and remain on-site. Media who leave after Air Force One’s arrival will not be able to re-access the site to cover departure!”

The media were given a very narrow window of opportunity to address the president: from 8:30 a.m. – 8:45 a.m. Needless to say, this left many a newsman shaking their head in utter disgust, despite our president’s bright smile and easy charm, lol. 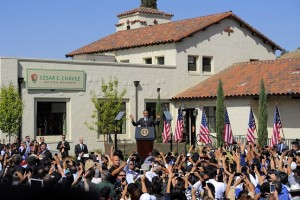 However, all the time and trouble proved to be well worth it when the president finally took the mic at approximately 11:15 a.m.

After his speech, President Obama-closely guarded on all sides by tight security-moved about the front of the crowd, smiling broadly and shaking hands as cameras both cheap and expensive snapped away from all directions.

Shortly thereafter, he boarded his black helicopter and rose above the crowd, taking flight.

The widow of the late César Chávez spoke fondly of the private visit our president took with her earlier that day, to the grave site of her late husband, who is buried on the grounds of their home; a home that thanks to President Obama is now a designated National Monument. 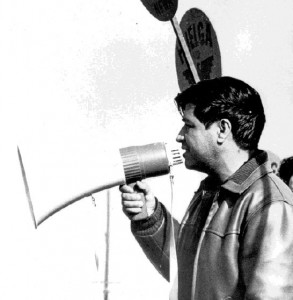 ¡Si, Se Puede!
Yes, we can!
Widely recognized as the most important Latino leader in the United States during the twentieth century, César Chávez led farm workers and supporters in the establishment of the country’s first permanent agricultural union. His leadership brought sustained international attention to the plight of U.S. farm workers, and secured for them higher wages and safer working conditions. Photo courtesy of The National Park Service. Copyright 2012.

But, unknown to the crowds below, our president had one more visit to make before arriving back at the International Terminal at Meadows Field Airport: the tiny farming town of Porterville, California and its nearby sister towns! Yes, with plenty of time to make it back to Air Force One (not slated to depart until 12:30 p.m.) our president decided to “take a cruise” through our farming communities that border the metropolitan city of Bakersfield.

Startled citizens of Porterville, their jaws dropped in awe, stared up into the skies to see the Presidential helicopter  casually circling the city parameters, with some citizens calling City Hall to report it slowly flying overhead right in their very backyards! It was a surprising and rather touching gesture from our president, as if to say: “If you cannot come out today to see me then I will come out to see you!”

The Los Angeles Beat wishes to thank ‘Bakersfield Now’ for the use of their video of President Barack Obama’s complete, uncut speech for the establishment of the César E. Chávez National Monument in Keene, CA. Copyright 2012. No use or reproduction thereof without the permission of Bakersfield Now. 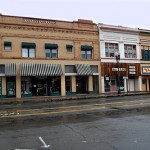 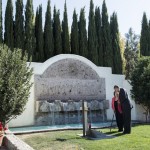 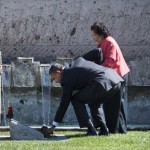 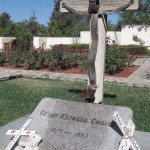 A native of Southern California, Shirley Peña began her career as a music journalist almost twenty years ago, writing for her websites "Stars In My Eyes: the Girlhowdy Website" and "La Raza Rock!" and progressed to creating various fan sites on Yahoo, including the first for New Zealand singer/songwriter Tim Finn. From there, she became a free agent, arranging online interviews for Yahoo fan clubs with various music artists (Andy White, John Crawford, Debora Iyall, John Easdale, etc.). She also lent her support in creating and moderating a number of Yahoo fan clubs for various music artists from the 1990s-today. As a music journalist, Shirley Peña has contributed to a number of magazines (both hard copy and online), among them: Goldmine, American Songwriter, Classic Drummer Magazine and UK-based Keyboard Player (where she was a principal journalist). A self-confessed "fanatic" of 1960s "British Invasion" bands, Classic Rock and nostalgic "Old Hollywood ", she also keeps her finger on the pulse of current trends in music, with a keen eye for up and coming artists of special merit. Shirley Peña loves Los Angeles, and is thrilled to join the writing staff of The Los Angeles Beat!
View all posts by Shirley Pena →
This entry was posted in Events, News & Sports and tagged Bakersfield, Barack Obama, César E. Chávez National Monument, Keene CA, National Chavez Center, Porterville. Bookmark the permalink.