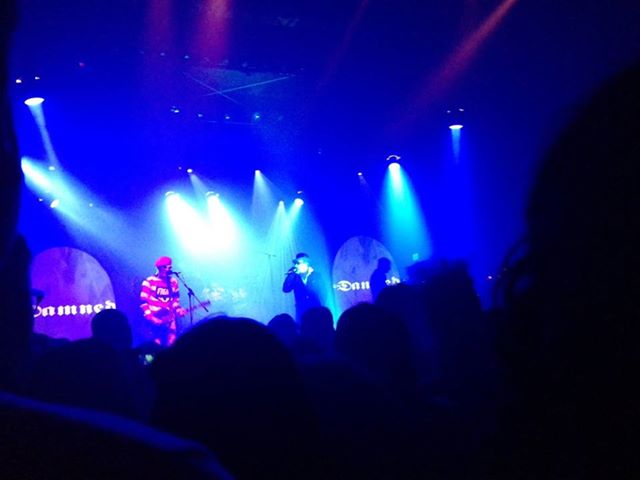 Legendary 70’s punk band The Damned performed May 26 at the El Rey Theater, and it was a good opportunity for people-watching. The elegant art deco theater, with its red velvet walls and chandeliers, provided an appropriate backdrop for the various ghouls and goblins in attendance. Young punks, most likely born fifteen years or so after The Damned’s first single (“New Rose”) was released in 1977, sported giant Mohawks, gobs of eyeliner, fishnets and leather. The “punks of a certain age” were fortunately (or perhaps unfortunately?) a bit more restrained, with dyed black hair and band t-shirts their only concession to the old days. Young fans could have easily been there with their old school punk rock grandparents; the age range was that wide.

After the ghouls and goblins (as well as relatively normal-looking fans) were packed into the theater, the lights dimmed; a blue hazy light projected onto the closed curtain, while dramatic organ intro to “Curtain Call” (from 1980’s “The Black Album”) began. The curtain opened to reveal the band: Dave Vanian and Captain Sensible (the only two original members currently performing with The Damned); Pinch (Andy Pinching) drumming, Stu West on bass, and Monty Oxy Moron, keyboardist.

Dave Vanian has transformed himself in recent years from a Victorian vampire in ruffled shirt, to a vampire Elvis with pompadour and leather jacket; nowadays, he doesn’t appear to be a vampire at all, but rather a gentleman strangler. Handsome and debonair in a white dress shirt, hat, sunglasses and black leather gloves, he could have been Don Draper’s sinister alter ego, bathed in a sickly green light through most of the show. (The famous optical illusion painting, “All Is Vanity,” in which the image of a woman sitting at a mirror also resembles a skull, made an ideal backdrop.) As always, in contrast to Vanian’s dark persona is that talented goofball, Captain Sensible. In red-and-white-striped shirt, red beret, and white-framed sunglasses, he was clearly the leader, cracking jokes and introducing songs throughout the show.

Although the band has released several new albums in recent years, the bulk of the material performed spanned the era from 1977 through 1985. During those years, the band expanded their sound from ferocious, catchy punk (as on their debut album, “Damned Damned Damned”), to dark, keyboard-heavy psychedelic rock (1982’s “Strawberries” embraced the band’s love of 60’s garage), and finally, to a relatively polished, major label act (1985’s “Phantasmagoria,” by which time Captain Sensible had departed, is the band’s most commercial album, yet still retained their unique identity and sense of humor). Set highlights included “I Just Can’t Be Happy Today” (with Monty Oxy Moron providing the signature organ solo); the Motown-influenced “Stranger On The Town,” and the music hall camp of “Grimly Fiendish.”

The onstage banter was almost as entertaining as the music. After Sensible commented that the U.S. audience was considerably more attractive than the U.K. audience, the band broke into the rollicking “Dozen Girls,” with its end refrain: “He’s alright and he don’t care / he’s got thermal underwear.” Prior to playing “Alone Again Or” (a cover song by legendary Los Angeles 60’s band, Love), Sensible also reminisced about reading magazines as a kid during the 60’s, wishing he could have been part of that “shagadelic” scene. During “Ignite,” he led the audience in a sing-a-long of the “whooahhhhh” pre-chorus, urging them, “Come on! You can do better than Leeds or London!”

The band performed a generous encore, beginning with the spaghetti western guitar riff of “Shadow of Love;” the bratty “Neat Neat Neat” (segueing nicely into The Doors’ “Break On Through (To The Other Side);” “Melody Lee” and “Video Nasty.” Captain Sensible, shouting that they were “still alive, still here,” went on to rant that they were a much better deal than “those bastards, The Rolling Stones, charging a thousand dollars a ticket!” Dedicating “Smash It Up” to Keith Richards, the band ended the night with the full-length version of the song, with its moody, jangly intro leading into the quick-paced, infectious chorus.

As Vanian and Sensible are the only original members, some fans might have been doubtful that The Damned’s current incarnation (especially without Rat Scabies’ manic drumming) would live up to any high expectations. Monty Oxy Moron, Pinch and Stu West, however, played exactly what was needed and more, adding their individual styles without deviating too much from the original recordings. The band’s energy, musicianship, imagination and wit would put many a younger band to shame. At one point in the night, Sensible quipped, “Not bad for a bunch of ol’ bastards, innit?” Not bad, indeed; in fact, it was nothing short of mind-blowing.

Carolyn Soyars is a freelance writter/blogger and musician, who performs under the name Carolyn Edwards. She has played with such critically acclaimed bands as 3D Picnic and The Negro Problem, and performs traditional folk music with her husband, Dave Soyars. For more info., see www.carolynsoyars.com for writing, and www.carolynedwards.com for music.
View all posts by Carolyn Soyars →
This entry was posted in Music and tagged Carolyn Edwards, Carolyn Soyars, Dave Vanian, el rey theater, punk, The Damned. Bookmark the permalink.