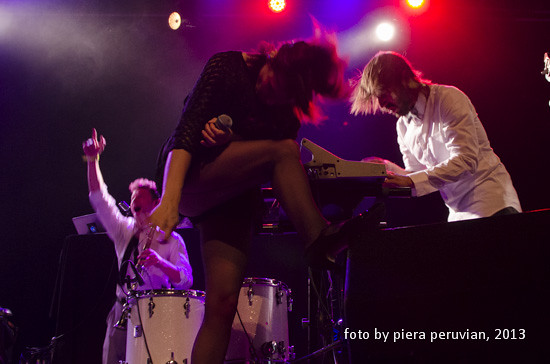 Caravan Palace brought their energetic mix of swing and dance beats Wednesday night to the Fonda Theatre.  Dubbed “electro swing”, Caravan Palace is on a US tour in support of their second album Panic — (think Django Reinhardt meets Daft Punk.. a mix of live horns, strings, and drum machines).  The band hailing from France, is fun and ridiculously energetic.  Lead singer Zoé Colotis helps usher in the mood.  She sang, laughed, and danced the entire night.  Zoé moved all over the stage and even jumped into the crowd; she would talk to us in her French accent, saying things that didn’t quite literally translate well into English, but added to her charm just the same.

It is evident Zoé has a great rapport with all her band mates.  The rest of the band, just as well-choreographed, moved to the beat, sang, and jumped the entire night keeping the energy flowing.  Members would switch between instruments throughout the night: violin to keys, bass to upright, and so on.  Clarinet solos were aplenty as were costume changes for Zoé.  A dance troupe also joined Caravan Palace at the end of the night, break dancing for us and taking everything to the next level. 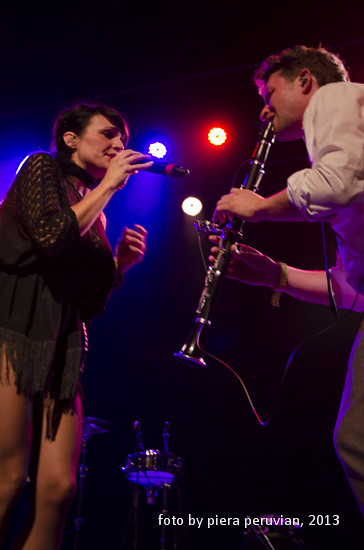 Zoé and Chapi on stage.

While I’ve only recently come across Caravan Palace, this is only due to my own musical ignorance.  The show looked to be sold out and the crowd looked like true devotees of the speakeasy era.  Dressed to the nines, everyone was ready to dance.  A mix of steampunk and Mad Men aficionados, part of the fun of going to this show was to see what others were wearing.  It appeared to me the crowd was slightly skewed and had more male attendees, all of which danced better than I’ve seen at any night club.  How refreshing and fun it was. 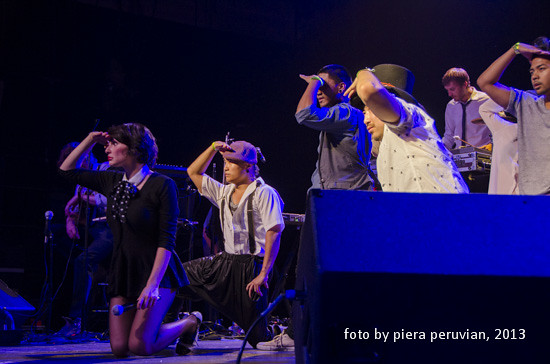 Caravan Palace is clearly influenced by an era long ago, but they bring a whole new breath of freshness to the swing sound.  Check out their album Panic, and check them out next time they are in town… but don’t forget to bring your dancin’ shoes.