Posted on September 3, 2013 by John Collinson 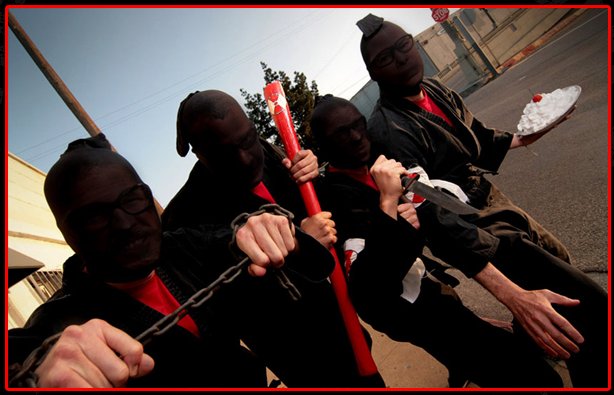 The Black Widows have been menacing the streets and shores of Southern California for two decades with their unique brand of rock and surf that defies both genres. These guys are bad dudes who could never be your “friendly neighborhood Spider-Man.” Following the 2011’s “Live on KXLU” and 2000’s “Arocknaphobia,” the ninja arachnids are back with a new full-length album “Revenge of The Black Widows,” a stupendous creation of sensitivity, power and evilness. Like all of their music, “Revenge of The Black Widows” is unadulterated by lyrics of any kind: as hot as the poker in your fireplace and electric as a third-rail. In anticipation of a September 7 appearance at the Los Feliz Street Festival and a September 14 performance at the Punk Rock Rovers/Pasadena Humane Society benefit show at the Redwood, the Los Angeles Beat spent some time with The Black Widows to diagram their D.N.A. and better understand their unapologetic awesomeness.

Los Angeles Beat: Your music is timeless. I could easily picture The Black Widows in a bar scene in a Billy Jack movie or another 60’s biker classic. What is the band’s history?

Black Widows:  We were on an expedition – somewhere between St. Louis and Brazil. We found a glowing black emerald. Beams of ominous, radiating light shot from it and encircled us. We became The Black Widows, bestowed with special powers. It took weeks to get back to civilization, but during that special period, we wrote some songs, devised our method, and tapped in to the evil. 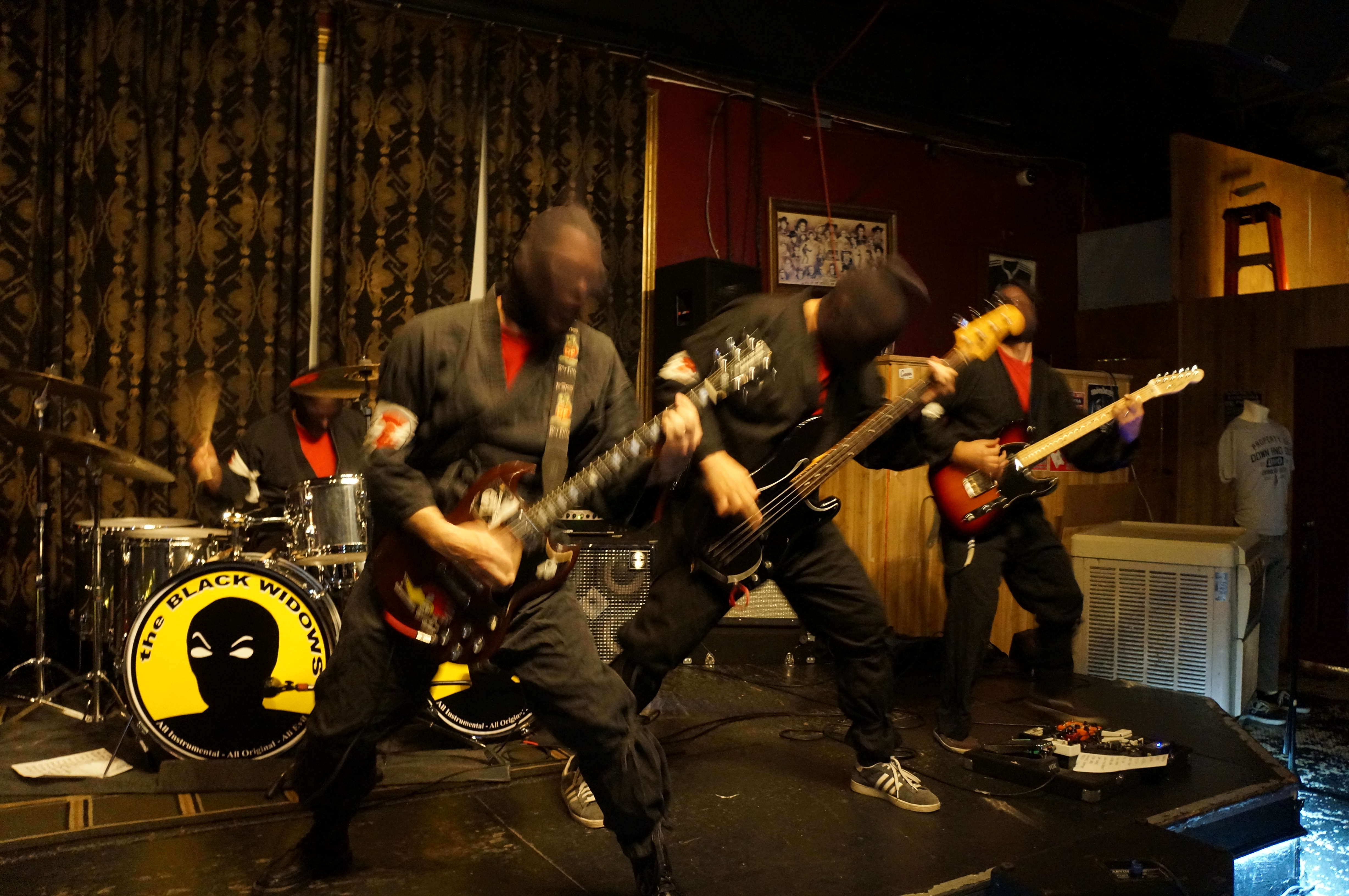 Los Angeles Beat:  “All Instrumental, All Original, All Evil” is your mantra. I suppose talk is cheap. Can you elaborate?

Black Widows:  “All Instrumental, All Original, All Evil.” It encompasses the three corners of existential reality – earth, wind and fire. From skyscrapers to boulders to quarks to neutrinos – It needs no explanation, really.

Los Angeles Beat: Over the last few years, the band seems more focused and is playing with great intensity. What drives this band?

Black Widows:  We know how to edit ourselves. There’s no place for throwaway tunes or crap of any kind. You only have so much time on this planet, so we make every note count. The song you sing today may be your last. We have also taken on a personal mission to get instrumental music back on the radio. Used to be there were instrumental hits on the radio right up to the early 80’s. Then they just up and stopped! The Black Widows will bring it back. Nowadays, with American Idol and all these shows with so-called singers, we need to constantly remind people to shut the hell up! 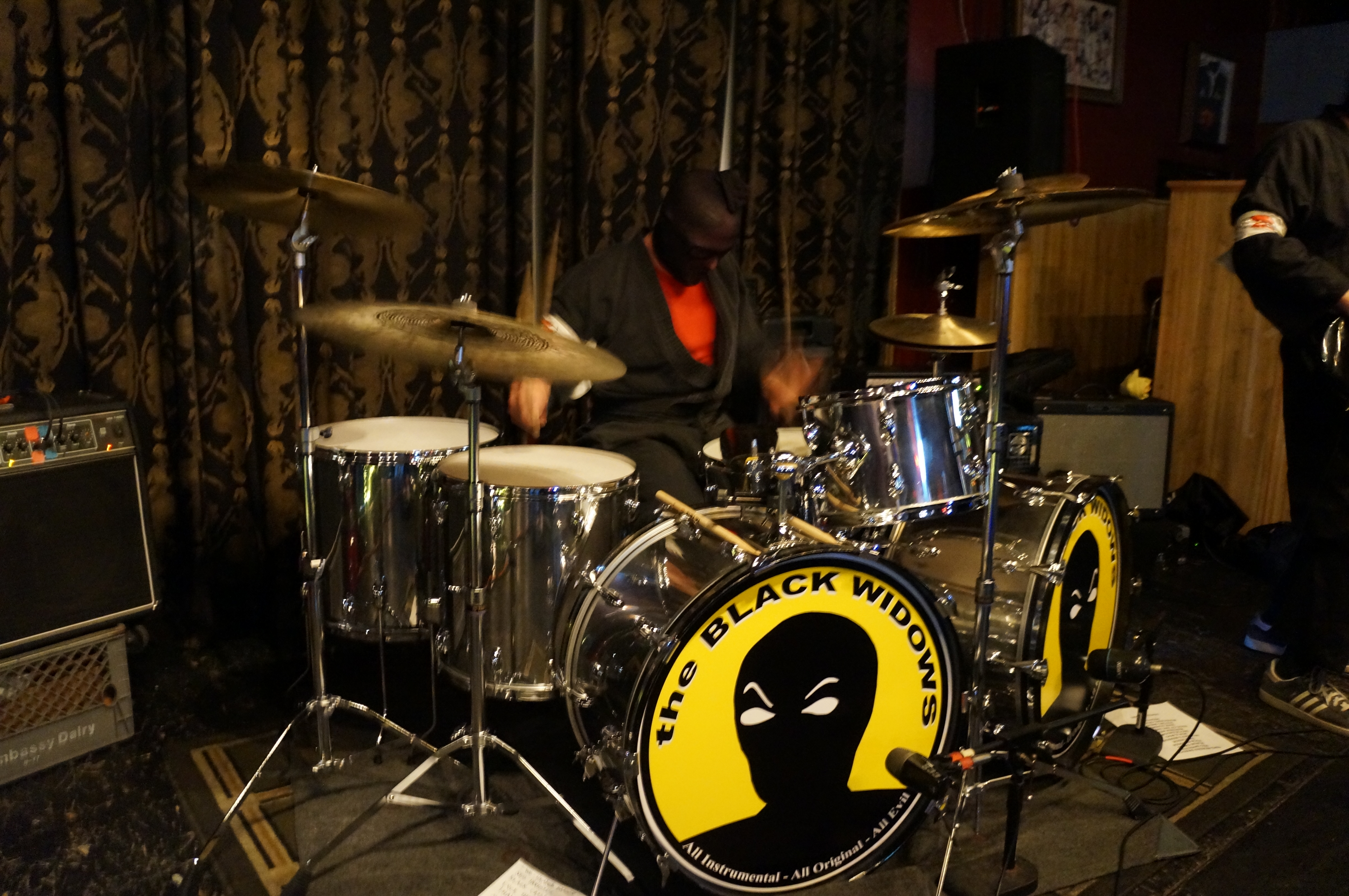 Los Angeles Beat:  The addition of the Executioner on drums has increased the heaviness and urgency of your sound significantly. Speaking as a drummer, his ability to blend hard rock drumming, e.g. John Bonham, Don Brewer (Grand Funk), Corky Laing (Mountain) with surf-style drumming, haunts my dreams. I can feel his kick drum in my chest. What makes this guy tick? I also understand that he knows how to set up a kit of drums.

Black Widows:  The Executioner is the God Of Thunder. He can play any beat, rhythm or time signature – and in The Black Widows, he has to! The secret of great rock is in the subtlety, not the bombast. That’s what separates the leaders from the sheep. Look at any band trying to play a Black Sabbath song. They get the changes but there’s usually something missing. The Executioner understands the details and mechanisms that one needs to make the sound heavy without getting overbearing. Now if you don’t understand that, then go away and learn something! But he can’t set up a drum kit – his roadie does that. 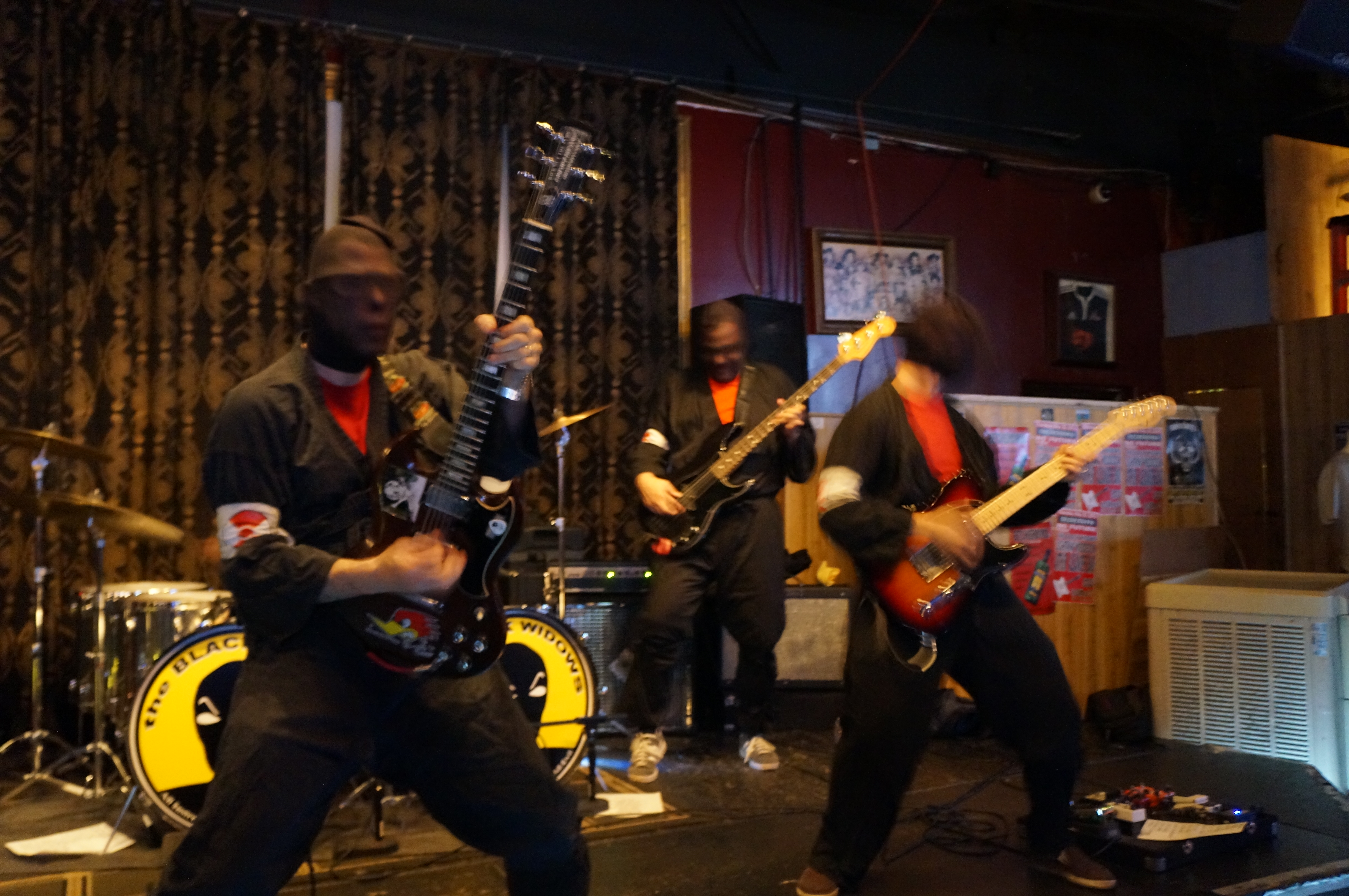 Los Angeles Beat:  On stage you are an anonymous but menacing bunch. How do you blend in off stage?

Black Widows:  Offstage we are anonymous – and still menacing. Every once in a while, we will take a trip to the zoo in full Widows regalia. The giraffes get a real kick out of it!

Los Angeles Beat:  Having sustained a few black widow bites, I am familiar with the symptoms and effects- chest pains, feeling of being boated, which are similar to symptoms of a heart attack. What is the band’s threshold before it strikes its prey?

Black Widows:  As long as you’re rockin’, you’ll be OK. But if you’re sitting there listening to some weak-ass, oh woe is me whiny crap – it’s Sayonara, daddy!! Once again, we need to stress the importance of making every minute count. If you die tomorrow, do you want the last music you hear to be bland, stupid and dull? No! You do not. The Black Widows are right here in front of ya! Shut up and listen!!

Los Angeles Beat:  Early media reports attributed the death of Slayer guitarist Jeff Hanneman to a spider bite. Do you know anything about this?

Black Widows:  It’s real sad to lose one of the greats. But I think if a spider bites one of the Slayer dudes, the spider will die!

Los Angeles Beat:  The title of your new album “Revenge of The Black Widows” implies that you were wronged. Can you explain?

Black Widows:  When you start a great band with a great concept, you end up with a circle of associates around you. Sometimes, these people think they created your concept and want to take credit for it. And some of these people are addicts and users and that can give them an inflated sense of ego. That is where revenge comes in. These folks need some Charles Bronson style ‘upside the head’ slaps directed towards them! I mean, it’s just a word, and we’re not high school kids. Cool title though!

Los Angeles Beat:  New material and new arrangements on “Revenge of The Black Widows” will thrill longtime fans. “Orange Squeezer” takes the band into soul/funk territory. Is there a story behind this tune?  To me it sounds like you picked up Huggy Bear while navigating the mean streets of Bay City.

Los Angeles Beat:  “Stampede” sounds like a victory lap through a road house. What’s the inspiration for this?

Black Widows: Having played many a roadhouse in the Midwest, we know what gets ’em revving. Citizens need to be jump started. It is the power of the Killer Riff. This is a time-honored tradition worthy of a book. Get to work on that! We did our bit.

Los Angeles Beat:  “Burned Commanche” has a latin horn and castanet part. Was this your first time working with the Tijuana Brass?

Black Widows:  Yes, and the last, daddy! The INS stormed in and set fire to the place just as the last note was being recorded! ¡Pinche migra! We had to sneak in hours later and hustle out the tapes! That’s where being a ninja comes in handy.

Los Angeles Beat:  What does the future hold for The Black Widows and its cauldron of fans?

Black Widows:  Well, currently, a split 7″ with the Atomic Sherpas is being discussed and strategized. Also, there are plans to produce two new videos – we call ’em movies. Additionally, there will be a track on a new compilation from Scare America, although we don’t know when it will be released. Plus, there is some possible soundtrack work for an independent film – a job that is perfect for us! We are trying to convince these jabronis that we should be the stars! Somebody in this town of geniuses will figure that out. Au revoir!

The Black Widows perform at the Los Feliz Street Festival on Saturday, September 7 at 6:15 p.m. They are also performing with The Golden Rulers, Backbiter, Mike Watt and the Secondmen, Channel 3 and The Rotters at the Punk Rock Rovers/Pasadena Humane Society Benefit Concert at the Redwood Bar and Grill on Saturday, September 14 at 5:30 p.m. The Redwood Bar and Grill is located at 316 W. Second St., Los Angeles, CA  90012; www.theredwoodbar.com. Black Widows albums and merchandise are available for purchase at www.theblackwidows.net.