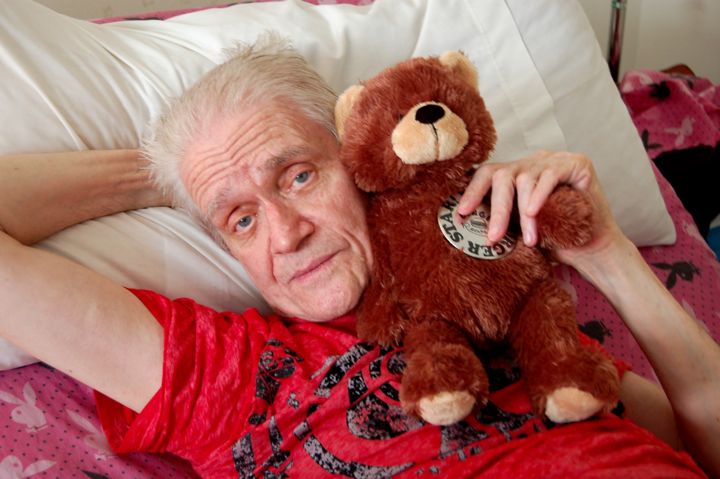 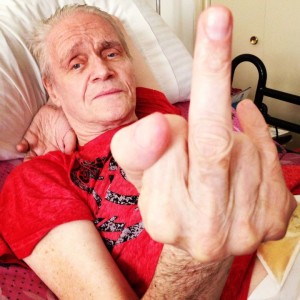 As the timid souls of our city tuck themselves into bed at night, crossing their hearts and summoning angelic aid should they die before they wake, the real werewolves come out to play. The eccentrics, the freaks, the oddballs – those touched by the frenetic hand of rock-n-roll. Geniuses who want to see and be seen, to hear and to be heard; those who sweat passion and intensity through the pores of their ever hungry skin. In Los Angeles our constant need for media whoredom actually finds a way to co-exist peacefully within those of an eccentric and artistic temperament. Our city breeds these people, nurses them and then in turn feeds on their peculiarities. The Godfather of all of Hollywood’s self-created weirdos just may be rock-n-roll legend Kim Fowley.

“Greatness is my disease” – Kim Fowley 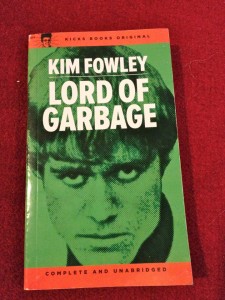 Lord of Garbage by Kim Fowley (photo by Nikki Kreuzer)

With the first part of his autobiography, Lord of Garbage, recently released by Kicks Books, part of Norton Records, Kim gives readers a furtive peek into the oddity, the tenacity, the absurdity and the perseverance of his formative years. The first installment covers Kim’s life from 1939-1969. Already written, but to be published at a future date, is Planet Pain, covering 1970-1994 and the final, yet untitled book, will be put out posthumously after Fowley’s death with an epilogue written by the madman himself on his death bed. Fowley has been battling cancer for several years and doctors have given him an estimated 5 years to live. In fact, the ever present grim reaper of death is what provoked him to start writing his life’s story. He matter-of-factly claims that “Death is my next long term project” and boldly brags that he feels no fear. “I kind of look forward to being the doorman at Satan’s Beach House. I got the gig already. Think of all the dirty pussy in hell… I’d rather be there then in heaven, which is just going to have the Osmonds and the Carpenters.” 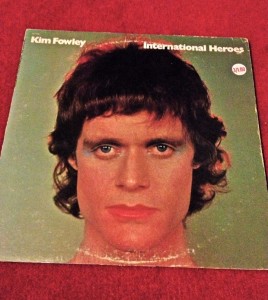 International Heroes, an album recorded by Kim Fowley in 1973 (photo by Nikki Kreuzer)

Trying to sum up the career of this prolific and outspoken character for those uninitiated is honestly frustratingly futile. Fowley has had one or more hands buried deep in the music business since 1959. With at least 28 solo albums as a recording artist under his belt, his credits as a writer or producer seem to stretch into the clear blue sky of infinity. He is best known, perhaps, for discovering and producing Joan Jett & the Runaways, but has penned classics for KISS (King of the Night Time World and Do You Love Me?), and written or produced for Alice Cooper, Paul Revere & the Raiders, Blue Cheer, Gene Vincent, The Modern Lovers, The Seeds, Helen Reddy, The Quick and so many more.

“Since 1959, when I first entered the industry on February 3rd, the Day the Music Died, I have not been off the charts as a writer, artist, producer, publisher or deal maker. Since that day in the following countries- Australia, New Zealand, Japan, America, England or Germany- something has charted.”- Kim Fowley

“I learned how to speak at 10 months, read and write at a year and a half, and I was at UCLA when I was 14. I retired when I was 24 years old from having to work. I did everything fast. I didn’t struggle at all in music.”- Kim Fowley 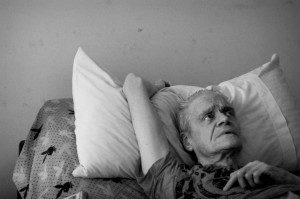 Kim reflects upon his past (photo by Michelle Freek)

This new book gives readers the chance to stare deeper into the muddy puddles which are the twisted reflections of Kim’s troubled childhood and his harried insistence of trying to prove himself well into man hood. It is the insistent fairytale of the pauper striving to be the prince. It’s a fable which revolves around our beloved Hollywood and grasping for those elusive brass rings.

“I was this illiterate piece of scum out of the gutter, but I could meet people like Richard Neutra, the famous architect, and discuss structure with him. I could go to the widow of Aldous Huxley and discuss The Doors of Perception with her as a 10th grader. I could go to UCLA- I have a 164 IQ, 19 points over genius, and hold my own. But I used my intellect as a weapon. I spent a lot of my life going to shitty rock-n-roll events and doing disgraceful, horrible, grotesque things for the sheer joy of it.” – Kim Fowley 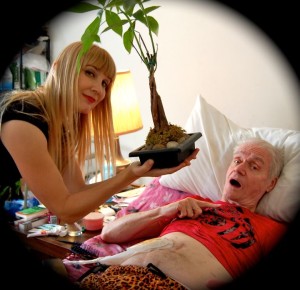 Fowley, at 74 years old, seems as full of bile, fire and brimstone as he ever was. Truthfully, he seems almost indistructable. Like the energizer bunny or even Keith Richards, those that know his history marvel at how much of a survivor he really is. With advanced bladder cancer, now in remission, Fowley now uses a wheelchair to get about, but that has hardly tamed his audaciously wild spirit. He has successfully fought cancer four times before this- prostate, melinoma, ear and forehead; he’s had pneumonia nine times, polio twice, and was even ravaged by a West Nile Virus bearing spider.

“I have tremendous resilliance. I’m an asshole, so I can take the bullet, the brick, the bomb, the blade, and the bottle across my face…” -Kim Fowley

Kim keeps incredibly busy, and is still involved with producing young artists and has lately recently added to his resume the title of Actor/Director/Writer with a handful of films he’s created. With titles like Frankenstein Goes Surfing, Satans of Silverlake and Dollyboy: The Movie, in which he plays the world’s ugliest drag queen, you can be sure that Fowley’s artistic shock therapy is nowhere near its finish. He also has nine years under his belt as a DJ on Little Stephen’s Underground Garage, a SiriusXM radio station.

“I say horrifying, revealing, illuminating, educational, escapist, inspirational things, but within the context of good taste… I don’t need to be a vulgar person. I don’t need to be a piece of shit. My radio audience loves the music we play, and my job is to explain sometimes how the records were made and what caused the music to exist and what the music can do for them to get through this painful existence that’s called being human.” -Kim Fowley

Fowley’s latest stop in his whirlwind tour of life is luckily going to give him a chance to visit with both his admirers and his detractors. He is preparing to do a book performance and reading from Lord of Garbage on Saturday October 5th, 2013 at the always interesting gallery La Luz de Jesus. It would be in Offbeat L.A. readers best interest to attend this event and partake of some of the surreality that Mr. Fowley is prepared to dish out. As Kim himself so characteristically lays it out,“I’ve had two operations this year, so my chances of being dead are real good, real soon. So come see what it’s like to kiss a dead man’s lips…”

And in case you need a little more persuasion… 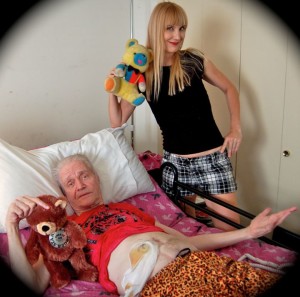 Another shot of Kim & the author- and bears too. (Photo by Michelle Freek)

Nikki Kreuzer has been a Los Angeles resident for over 30 years. When not working her day job in the film & TV industry, she spends her time over many obsessions, mainly music, art and exploring & photographing the oddities of the city she adores. So far she has written 110 Offbeat L.A. articles, published at the Los Angeles Beat. As a journalist she contributes regularly to LA Weekly, Blurred Culture and The Los Angeles Beat and has also been published by Oddee.com, Twist Magazine, Strobe and Not For Hire. Nikki is also a mosaic artist, radio DJ and published photographer. Her photography has been featured in exhibit at the Museum of Neon Art, in print at the LA Weekly and is part of an upcoming show at the Neutra Museum in Los Angeles. She has recorded with the band Nikki & Candy as bassist, vocalist and songwriter, directing and appearing in the 'Sunshine Sunshine Santa Claus' music video for the band. She co-hosts the monthly radio show Bubblegum & Other Delights on Dublab.com. Her acting credits include a recent role in the ABC-TV show 'For The People', 'Incident at Guilt Ridge', 'Two and a Half Men', the film 'Minority Report' and 'Offbeat L.A.', a web series, written and hosted by Nikki Kreuzer. Her writing, radio and video portfolio can be found at OffbeatLA.com, her photography work @Lunabeat on Instagram and her music history posts @NikkiKreuzer on Twitter. Find Nikki & Candy music on iTunes, Amazon or at NikkiandCandy.com.
View all posts by Nikki Kreuzer →
This entry was posted in Events, Interviews, Miscellanious, Music, Offbeat LA and tagged KIm Fowley, La Luz de la Jesus, Lord of Garbage, Nicole Kreuzer, Nikki Kreuzer, Offbeat L.A., Offbeat LA. Bookmark the permalink.

6 Responses to Offbeat L.A.: Kim Fowley- Bad Boy With a Heart of Gold (Last Stop Before the Neon Graveyard)