Alexandra and the Starlight Band AFI/ASCAP Acoustic Happy Hour Takes a Turn Towards the Phenomenal and the Unexpected!

Photos by Billy Bennight for the Los Angeles Beat

I was covering the Miles Davis event as a photographer at Mr. Musichead Art Gallery and ended up having a conversation with Alexandra Lee and Zachary James of Alexandra and the Starlight Band when the topic turned to my covering AFI Fest . To my surprise Alexandra would be playing a special AFI/ASCAP acoustic set on Saturday. As much as I love seeing new and highly anticipated features there’s is nothing better than to break up a obvious pattern of movie after movie with something off track, more spontaneous and counter-intuitive. Under that kind of situation a chance to see live music performances surrounded by a cascade of films makes for more of a unique experience.

Saturday evening I arrived early at Hard Rock Cafe after viewing Herblock: The Black and the White. I grabbed a tall table near the bar in clear view of the stage. I was there for the AFI/ASCAP Happy Hour at Hard Rock Cafe. I guess the joke was on me because I didn’t order any of the Happy Hour beers for my stay there at the tall table, nor was I there at that table for an hour. Ryan Dilmore held the stage for that period of time. Soon after Ryan’s set I spotted Zachary James, a tall thin figure with long black hair and trimmed bangs in Rock N’ Roll gear, off to the other side of the stage. It wasn’t long before I joined the entourage of Glam clad young Hipsters, nesting at a table left of stage. It was a joyful reunion from the Miles Davis event from Thursday night. My new friend Lisa Kaas Boyle, a Huffington an Eco/Green Blogger, was there to take it all in. I met Lisa at the Miles Davis book signing at Musichead Art Gallery for Miles Davis: The Collected Artwork and we hit it off. Lisa and I were looking forward to Alexandra’s show: me a veteran and her a newbe. The energy was high within our group, with Jeff (the keyboardist) Alexandra (vocals) and Zachary (guitar) were all pumped to hit the stage and get their groove on!

Photo Gallery after the Break

Often with these kind of acoustic performance the music isn’t a player in this kind of environment, but rather the music drifts to the back, then falls into the background amongst the tings and clanks of silverware, dishes being shuffled about and mixed in with the den of familial and friendly conversations; not the focus of everyone’s attention or remotely the cause of buzz or focus in the venue. The music usually becomes wall paper while the audience’s main drive is to satisfy their hunger and renew their vigor at meal time.

Alexandra and her crew mounted the stage to modestly start there set. Alexandra’s full band produces an electric power Rocker vibe pumped with energy, where she dominates the stage like a stalking cheetah at the point of pouncing on the prey. Tonight it was a little different as the set emerged more on a softer note with the song “Without My Sunshine”. Simultaneously, there was a large group of women gathering together at the front of the stage, settling in at the edge of the stage, pulling tables together with the wait staff bring drinks for all involved. Alexandra, even with the constraints of an acoustic performance, is personable and engaged with her audience. She poured herself into her songs, “I Gotta Thank You”, “Love Like Fire” and “My Planet is Red (Your Planet Is Blue)”. But it was the closer, “I’ll Stand By You”, that hit a note with the ladies at the front table. Alexandra with her usual charm started a conversation with these ladies between songs. The ladies were really getting in to it and started singing along. Alexandra invited the ladies up on stage to sing along with her on “I’ll Stand By You”. In an instant they left their table to join Jeff, Zachary and Alexandra on stage to blow up this closing song. The room stood still, all eyes transfixed, were gazing upfront looking on at this unexpected throng of singers, a choir, who joined in on stage with Alexandra with amazing verve and passion! It turned out to be a special group of women, known as The American Military Spouses Choir of CAMMO: a choir of Military Spouses that has been seen on America’s Got Talent and premiered at the Kennedy Center were in town to perform on The Queen Latifah Show and The Hallmark Channel’s Home and Family. What a serendipitous and stunning accident! All those beautiful voices joining together with Alexandra on a Veteran’s Day weekend. This only proves that life is more amazing than anything planned or scripted. There was unfettered joy in the room, contagious and palpable as they all sung in unison. This moment blew up the evening and closed down the house for the AFI/ASCAP showcase in a most vivid unexpected fashion: memorable and true with a finalé celebrating togetherness and unity for Veteran’s Day.

The evening turned out in a spectacular way and such a nice bump in my AFI Fest experience. After AFI Fest has finished let me suggest, you may want to experience Alexandra and the Starlight Band’s power delivery at Hotel Cafe this Saturday the 16th. Her and the band generate a great show with tons of energy and great music. Music, like life can deliver the phenomenal and the unexpected! 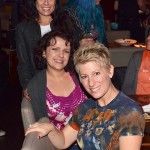 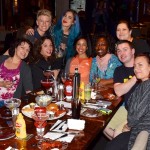 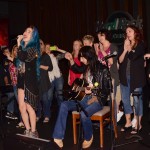 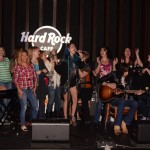 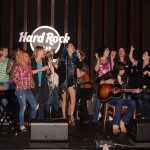 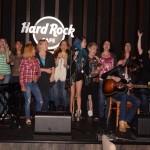 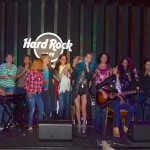 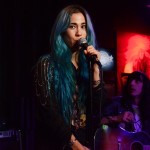 Billy Bennight is a writer, photographer and wardrobe stylist with expertise and years of experience in these disciplines. His musical youth started as a Punk Rocker and has expanded into exploring many genres of music, with an keen interest in art, fashion, photography and writing. He shoots celebrity events and red carpets for The Photo Access and ZUMA Press. He is a member of the Los Angeles Art Association. His images have been published in The Los Angeles Times, People Magazine, Wall Street Journal and Vanity Fair. He's very engaged in life. You can follow him on his Facebook page at: www.facebook.com/billybennightartist and on Instagram and Twitter @billybennight
View all posts by Billy Bennight →
This entry was posted in Events, Movies, Music, Upcoming Events and tagged Acoustic, AFI FEST, AFI FEST Presented By Audi, America's Got Talent, AMS Choir, ASCAP, Billy Bennight, CAMMO, Electric Power Rocker, glam, Hard Rock Cafe, Hipster, Hotel Cafe, Kennedy Center, Music, Rock, Rock and roll, Rock N Roll, The American Military Spouses Choir. Bookmark the permalink.