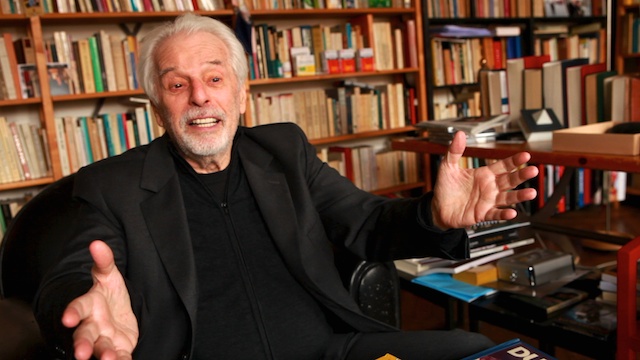 This was a screening I was looking forward to at AFI Fest, as well as, having a chance of watching it with my some of friends. The movie was billed by AFI Fest as, “Midnight movie icon Alejandro Jodorowsky’s ambitious vision for his “Dune” adaptation is a Who’s Who of 1970s-era sci-fi artists and a love letter to cinema”. My friends Jonas Navickis, Tammi Sutton and Stacy Pippi Hammon, all active in production in different ways, rounded out our little enthusiastic group. It was a viewing group or devotees for our very counter culture and psychedelic movie making guru Alejandro Jodorowsky who directed El Topo and The Holy Mountain. None of us could rest till we saw this documentary of the making of Jodorowsky’s Dune.

Director Frank Pavich establishes Alejandro Jodorowsky as the documentary opens with stories of Jodorowsky’s work in alternative theater in Mexico. Jodorowsky asserts he had created over a hundred plays before he attempted film. Jodorowsky credited these plays as the foundation for his first, non-union movie, El Topo. His second feat in film was the making of The Holy Mountain: a visually striking metaphysical feature. The most note worthy clips from both movies acquaints the audience with Jodrowsky’s Psychedelic motif or homage to Surrealism and his striking visual style. The documentary really takes off in a riveting manner as Jodorowsky’s interview turns to transforming Frank Herbert’s novel of Dune into a movie. These interviews are where Jodorowsky becomes the magician, the mercurial shaman, genius, mystical guru, the salesman, a visionary, the pandit, a psychic warrior and master Auteur. The documentary is in both English and Spanish. Both languages offers his thoughts in a relatable way to his fan base. The feeling I got the feelings listening or while reading the subtitles was Jodorowsky is immensely charismatic and an intoxicating individual. His dialectic for his LSD inspired, third eye opening, mind expanding-consciousness-transformational experience of Dune had me wondering if Jodorowsky wasn’t the Kwisatz Haderach, himself.

Jodorowsky’s Dune draws you in by its whimsey, mad imagination, and the electric way in which Jodorowsky weaves a story. As the documentary progresses with interviews by those of whom he describes as his “Spiritual Warriors” you sense his mad genius. The documentary reveals Jodorowsky settles in a Castle in France. From there he gathers his Spiritual Warriors, who included: Jean Giraud aka Moebius, Chris Foss, Dan O’Bannon and H.R. Giger who were all responsible for creating the look of Dune. This is fallowed with the installment of the magical ways Jodorowsky comes across the talent he envisioned for his Dune, that includes: Brontis Jodorowsky, Salvador Dali, Orson Welles, David Carradine and Mick Jagger. Jodorowsky manage to enlist Pink Floyd for the soundtrack near the conclusion of their recording Dark Side of the Moon. Every vignette and story in the documentary has a magical quality about it and you find yourself waiting for the next line. As time passes Jodorowsky’s team of Spiritual Warriors help him assemble a tome of over 3,00o storyboard images. These storyboards will become a bound book charting the path of Jodorowsky’s Dune with vital images and story content.

Frank Pavich’s story continues of Jodorowsky’s story as it winds and unfolds in an anecdotal fashion with clever hallucinogenic graphic, on screen animation and illustrations to demonstrate the power and immensity of the tale that Jodorowsky wish to blow a new generation’s mind. Pavich made some great choices that told the story in a entertaining way and delivering the dream of Dune in fascinating manner.

The documentary then turn to the inevitable meltdown of Dune, once the film’s preproduction work had finished Jodorowsky made his pitch for production financing to the Hollywood Studio heads. Jodorowsky’s presented 5 elaborately bound books composed of his 3,000 storyboards to each major studio head. “The Hollywood Suits” were impressed by the work but no matter how impressive and detailed the vision was theThe Suits were shaken by Jodoworsky’s freak power and the fear of cost overruns for the production. Jodorowsky’s vision was light years ahead of what the Hollywood Studio Heads could fathom and the technology of the time to make the feature didn’t exist.

Once past the climax of the documentary Pavich and Jodorowsky chronicle Dune’s demise and David Lynch’s failure of the making of De Laurentiis’ Dune. The documentary wraps it all up with a retrospective sequence of the Jodowosky’s illustrations and concepts juxtaposed against the innumerable movies it influenced. This sequence in the documentary starts with Star Wars and Alien, fallowed by a host of others movies that have been released over the last 40 years that have been impacted by Jodorowsky’s Dune. Jodorowsky’s work has fueled a generation of conceptually powerful SiFi film that has rested on his Dune’s legacy. Jodorowsky’s Dune’s legacy includes a unique grandness of scale to the story telling, the conceptualizing of the space craft, the architectural structures of these futuristic adventures. Even the influence in the costumes designed for Jodorowsky’s characters have found their way in other movie. Everyone can relate to the heady moments and the dismal bleakness of movie making failure. Jodorowsky’s Dune delivers on every note! Jodowosky’s Dune the greatest movie never made and it’s bitter sweet tale that leaves you with the child like feeling of “what if?”.