Everyone Enjoyed Terrific Pig and Terrific Drinks at the Pig Out 3.0 Benefit for Inspire Artistic Minds 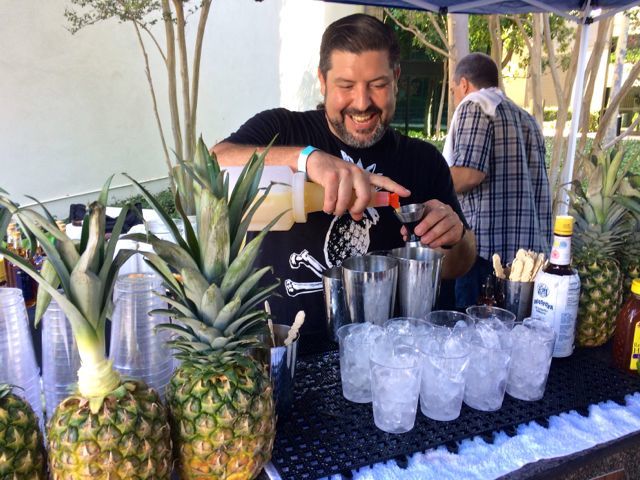 Yesterday’s Pig Out 3.0 took place under beautiful Southern California skies at the Noguchi Gardens in Costa Mesa. The event, a benefit for the Orange County organization Inspire Artistic Minds, featured 15 local chefs from top-notch restaurants and 7 top local bartenders. The Inspire Artistic Minds program creates scholarship opportunities for those involved in the restaurant industry to further their education, enhancing their career opportunities as well as benefitting the restaurants that they work for. Gabrielle Miynarczyk, from Michael Voltaggio’s renowned restaurant Ink in Los Angeles, is just one of many who has benefitted from I AM programs, recently attending the Portland Cocktail Week with a grant from Inspire Artistic Minds.

Bobby Navarro, founder of I AM, described the type of person that they look for in the I AM program. He said, “We really try to target the individuals that are self motivated and personally driven, so we are looking for those people that are already going to those programs or have the intent of already doing those things, so us coming in and helping them with that is an unexpected bonus, as opposed to other scholarship programs that may pay for an individual to go before they may know exactly what they are trying to do, or pay for a program that they may not necessarily benefit from in the future. I feel that that’s our biggest benefit”. 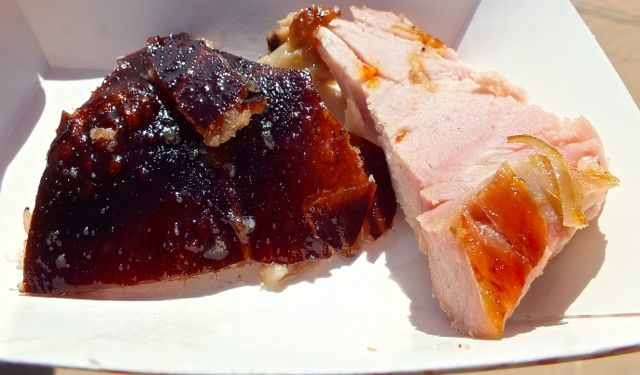 Of course, the ‘Guest of Honor’ who the event was built around was the Templeton Rye Pork Project pig. This pig, one of only 25 available nationally, was a combined project of Templeton Rye Distillery in Iowa, an Iowan farmer of registered Duroc pigs and a Doctor of Veterinary Sciences who supervised the pig’s diets. The pigs were fed as part of their diet, the rye mash left from the distilling process for the Templeton Rye Whiskey. Half of the 280 pound pig was prepared by Chef Amar Santana, of Laguna Beach’s Broadway by Amar Santana, while the other half was carved and served as the pork that the lucky winners of the auction got to take home. 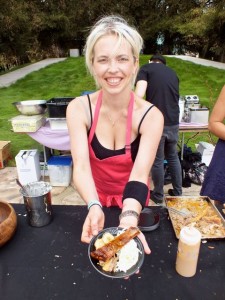 Guests were treated to some delicious pork based foods at Pig Out 3.0. Chef Nikki Starr Weyler of Mesa was serving pork two ways with cole slaw, the first a barbecued pork rib with a Kentucky Bourbon barbecue sauce and the second shredded rib tips with a South Carolina mustard-based sauce. Chef Amar Santana, with the featured Templeton Rye Pork Project pig, roasted and smoked it whole, serving tender roast pork along with crisp skin cracklings. Some of the pork he also used for one of the highlights of the tasting event, delicious pork and foie gras meatballs. These delicate, tasty meatballs were a delicious big bite and guests kept coming back for more. 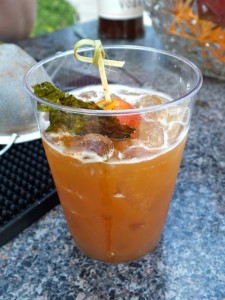 Gaby, one of the head bartenders at Ink, had a long line of guests waiting for her popular Bloody Mary cocktail. Infused with some wasabi, the drink gave fans of spicy cocktails a great glass with some punch. Roy Hansen, of Trader Sam’s Enchanted Tiki Bar in the Disneyland Hotel, made a marvelous tiki drink, doing double pours and then shaking and pouring from two shakers at a time. A pineapple leaf made a perfect garnish for this rum-based drink. Meanwhile, Broadway by Amar Santana’s bartenders were showing their creativity with the Templeton Rye Whiskey. Their cocktail used a base of Templeton Rye, along with juiced roasted corn, lime and honey to create a smooth, delicious and unusual cocktail. Garnished with chili salt and ground corn nuts, it was also lovely to behold. Next door, at the Templeton Rye Whiskey booth, Scott Bush, founder of Templeton Rye Spirits, ensured that sample glasses were passed out to taste the pure whiskey that his distillery produces. There was also a container of the actual mash that was fed to the pigs in the Templeton Rye Heritage Pork Project as an example. 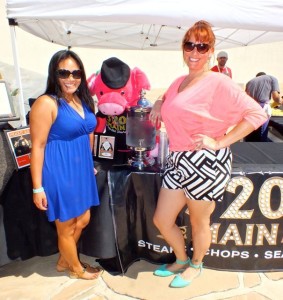 Other booths from restaurants such as 320 Main, Haven Gastropub, A Restaurant and Clay Oven provided guests with other delicious tastes. Ways and Means Oyster House, Fireside Tavern and Pizzeria Mozza were among others that provided porcine delights. Chef Eric Sanamiego made a pork ear Banh Mi sandwich, while 320 Main proved that a pork fat cupcake can be really, really delicious. 320 Main also had some delicious tiki drinks for all the guests at Pig Out 3.0. Napa Rose also got in the ‘spirit’, making some delicious tequila craft cocktails. 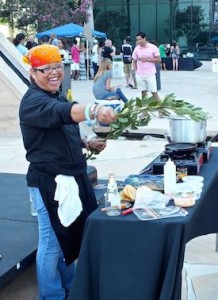 At the end of the event, the crowd enjoyed demos from celebrity ‘Hells Kitchen’ Season 12 Chef Bev Lazo and a knife demo. From Electric City Butchers, Chef Mike Puglisi held a demonstration on how to break down half a pig. After he finished, Chef Amar Santana and Chef Eric Samaniego joined him to auction off the various cuts of pork. The bidding was fast and furious, with many guests bidding for the various cuts. Near the end, in a generous move, Chef Amar threw in dinner for 4, cooking the fresh ham that was auctioned, with Chef Eric adding that he would ‘come in to help cook the meal’. The winning bid set a new high for Inspire Artistic Mind’s program. 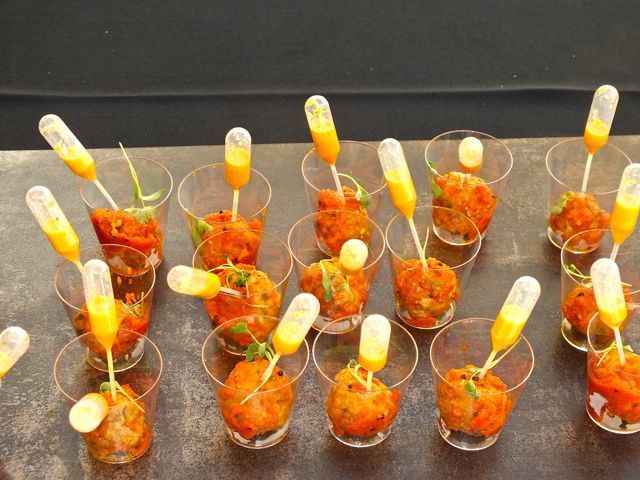 Bobby Navarro explained about how the Inspire Artistic Minds program is helped by those who have earned scholarships from I AM. “That’s a strong part of our event and program is that most fund-raisers call upon artistic industries so often, so we now have an opportunity to have a fund-raising event and then turn that fund-raising back into the people who support us”, he said. He summed up Pig Out 3.0 by saying, “I think with the 15 chefs and the 7 bartenders and the support from the community, this is one of our strongest events, especially with the media attention that we’ve received, this is one of our best years yet. I’m really excited!”.

Ed is a native of Los Angeles who loves food and food cultures. Whether he's looking for the best ceviche in Colombia, the best poke in Hawaii, the best tequila in Jalisco or the best Taiwanese Beef Roll in Los Angeles, it's all good food! He also loves a good drink. He's had Mai Tais in Hawaii, Bourbon in Kentucky, Tequila in Mexico and Rum in Jamaica. His wine escapades have taken him to Napa, Sonoma, the Willamette Valley and the Santa Ynez Valley. And he's had beer all over the world! Music is another of Ed's passion, writing and interviewing many classic rock, rock and blues musicians. Getting the great stories of road experiences from them is a particular delight. Traveling also fits in with Ed's writing, exploring all over to find the most interesting places to visit, even in out of the way areas.
View all posts by Ed Simon →
This entry was posted in Cocktails, Beer, Wine & Weed, Events, Food and tagged 320 Main, Bobby Navarro, Broadway by Amar Santana, Costa Mesa, Edward Simon, Ink, Inspire Artistic Minds, Little Sparrow Cafe, Pig Out 3.0, Templeton Rye Pork Project. Bookmark the permalink.