The Echo One Acts. The World Premiere of Six New Plays at the Atwater Village Theater – Through August 23rd 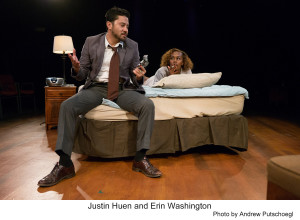 Cutting to the chase because I am late with
this review and don’t want anyone to miss an opportunity for some truly wonderful local theater due to my slacking – I highly recommend The Echo One Acts playing this weekend (Friday, Saturday and Sunday August 15, 16 and 17) and next (Friday and Saturday August 22nd and 23rd) at the Atwater Village Theater located at 3269 Casitas Avenue in Los Angeles.

The Echo Theater Company has been a staple (if not stationary) collective of actors, writers, directors, and producers dedicated to developing and presenting the work of playwrights on all levels to the theater going community of Los Angeles for nearly 20 years. Having found a permanent site in the Atwater Village neighborhood earlier this year the artists’ collective has been carrying on its tradition of high quality theater, wonderfully staged and marvelously acted. The 2014 collection of commissioned One Act Plays is no exception. The writing, all based around the common theme, or more precisely the common setting, of a bedroom – a bed, a chair or two, a nightstand and a lamp – takes aim at all of our trite and trivial conceptions of what may be one of the most overplayed settings in film, television or theater with wit, depth, energy and talent.

If it does anything the confinement to a common setting adds to the wonderment of the evening. Given the constraints of the commissions the playwrights accepted, it falls to the vision and skill of those six writers to move us in space and time, energy and emotional tone. It is a credit to the selection committee and to the writers themselves that as the evening begins to unfold you find yourself not only immersed in the story of the moment but also increasingly excited to see what else can be wrought out of this minimalist setting? It isn’t giving too much away to say the answer is “More, more . . . and still more”.

In the evenings opening scene ‘What Are You Doing On The Bed?’ (written by Shawna Casey, directed by Jennifer Chambers) a dog and a cat (Garrett Hanson and Sarah Jane Morris), left alone for the evening, carry on with the struggle for connection cloaked in individuality that their humans no doubt wage on those same sheets, pillows and blankets. Approach / avoidance may never have been so fun. The substitution of species for gender is more than clever and Hanson and Morris convey more than the comedy of the moment as you find that, in addition to the laughter, you are also struck with a sense of futility amidst the never flagging hope that that one who so enchants with their different-ness can at last be subdued into sameness. 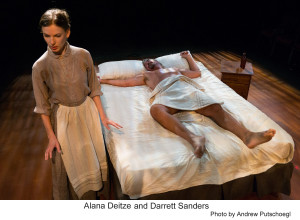 ‘General Sherman’s Hollow Body’ written and directed by Wesley Walker with Darrett Sanders playing the Union General and Alana Dietze and Jeanette McMahon playing his attendant sisters Caileen and Aibhlinn, is a hallucinatory bit of magic powerfully played out. Almost an incantation, or a ceremony, the drama builds even as we try to find our footing on the drifting ground of place and time. Rather than accepting this bedroom rests only within an emerging 19th Century America, we recognize that the scheming, the manipulation and the suffering being acted out before us could have fit perfectly within one of Sophocles Theban plays, or some Sisyphean hell about to turn itself over and begin again. The ‘dance’ between Darrett Sanders’ Sherman and Alana Dietze’s tormenter / comforter Caileen moves back and forth between the physical and the existential, the immediate and the timeless. Perhaps it never will resolve; perhaps it’s not intended to. But there is something elegant in watching truth express itself – and for it to do so in one’s presence, even with it’s origin and it’s meaning cloaked in mystery, is no small gift.

John Lavachielli’s ‘As We Sleep’, directed by Kevin Hoffer, set a bar for bedtime conversations that I don’t expect to see matched for a long, long time. Jennifer Chambers as ‘Anne’ and Michael McColl as ‘Ben’ touch every base of a relationship which no doubt began in love but has since been assailed by age, time, infidelity and fear – probably with some pressures of career, finance and self doubt thrown in for good measure. Both of the actors were so connected to their own characters loss and longing and to the sources of their partners original attractiveness and current suffering that I found myself wanting to watch the scene multiple times so that I could just observe the reactions they each exhibited to the blows, soft or heavy, thrown in offense or defense by their similarly hurting partner. They made real the risk and the magic of relating deeper than one-night stands or casual connections. As I watched their artistry I was trying to grasp the essence of what it was they had captured and then set loose in front of me. What they conveyed so brilliantly, individually and in tandem, was the idea that we open up enough to feel ourselves at least partially understood by a partner and then, having tested the waters, retreat into a place of loneliness. Satisfied that we could probably at any time open ourselves more – we take delight in the knowing instead of the doing. You don’t want to miss these two performances. They are more than theater.

For me the cleverest and most imaginative offering of the evening was Brian Tannen’s ‘The Optimist’, directed by Amanda Saunders. Parker Phillips as ‘Birdy’ and Tara Karsian as ‘Pye’ engage in a push pull struggle for the dominance of their own interpretation of the facts surrounding the disappearance of the Darling children. As in Wendy, John and Michael. Due to our familiarity with the lightness of the story of Peter Pan there is a tendency to discount the cynicism of Detective Pye and align with Birdy’s bumbling optimism. Tara Karsian somehow becomes a detective everyman and the weight of her worldly experience counterbalances the good regard she has for the well-intentioned if slightly naïve and inept Birdy. Her cynicism is used as a gentle prod while Phillips character pushes harder with his naiveté. These two play off each other effortlessly – and at the story’s end one of them has their presumptions confirmed.

‘Say You, Say Me’ by Lionel Richie’, written by Miki Johnson and Directed by Chris Fields, (with Erin Washington as Lala, Justin Huen as Donald, Karl Herlinger as Richard and Gareth Williams as Bill) adds one more prop to the bedroom motif. Which isn’t to say Washington’s bed bound prostitute Lala is wooden or one dimensional – she is the catalyst for three separate stories that without her active listening would never be told. In fact one of the more interesting juxtapositions between Lala’s approach to pillow talk and the conversations she calls forth is that she provides what each of the characters in the other plays are more or less, consciously or unconsciously, looking for – a real human being that listens.

“Call this guy and use some heroin”.

Or, “Take this gun and shoot yourself”.

But at least she heard the sadness that preceded her prescriptions and each of her clients left better for it. Washington played her part without slang or camp and made herself perfectly believable as the existential comfort that brought each customer his own separate peace.

It was great to watch Justin Huen, who I last saw making yet another part his own in the Fountain’s production of ‘El Nogalar’ immersing himself in the role of Donald. A talented actor who you feel some playwright should be crafting a memorable part for soon.

The evenings closing offering, ‘Laileen on the Way Down’ written by Jen Silverman and directed by Alana Dietze brings us into that final site of bedded (if not wedded) bliss through the stealthily accessed bedroom window of a trailer-parked doublewide. Jesse Fair’s Jack Bear pulls off what could be seen as the impossible feat of remaining coherently hilarious as he commits a burglary to retrieve his aging mother’s (Carol Locatell as Laileen) false teeth, which she misplaced during a bout of gerentological gumming of her apparently brand new acquaintance, the eloquent, philosophical and patient Francis (played by Daniel Hagen). This is a nice piece of work as the issue of aging and sexuality is explored with both insight and humor. The interaction between each of these characters captures the nuance of their relationship to each other and treats sex as a natural component of human relating.

It would be an oversight to fail to mention the important contributions to the success of the production made by Scenic Designer Shalom Pilon, Costume Designer Kathryn Poppen. Sound Designer Josh Fehrmann and Lighting Designer Christina Robinson. Their efforts put us in six different and most often private locales – each of which helped coax out its own story.

The sequencing of the plays works just fine – but I found myself wondering if switching ‘General Sherman’s Hollow Body’ with ‘Say You, Say Me’ by Lionel Richie’ might not have added to the overall arc and pacing. Which is something you can decide for yourself if you take my suggestion and make an evening out of one of the remaining August 2014 offerings of The Echo One Acts.

For more information including performance times and directions you can contact The Echo Theater Company via their website: http://echotheatercompany.com

4 Responses to The Echo One Acts. The World Premiere of Six New Plays at the Atwater Village Theater – Through August 23rd