Avery Schreiber Playhouse’s “You Love that I’m not Your Wife”: So Good, You’ll Want to Marry It! 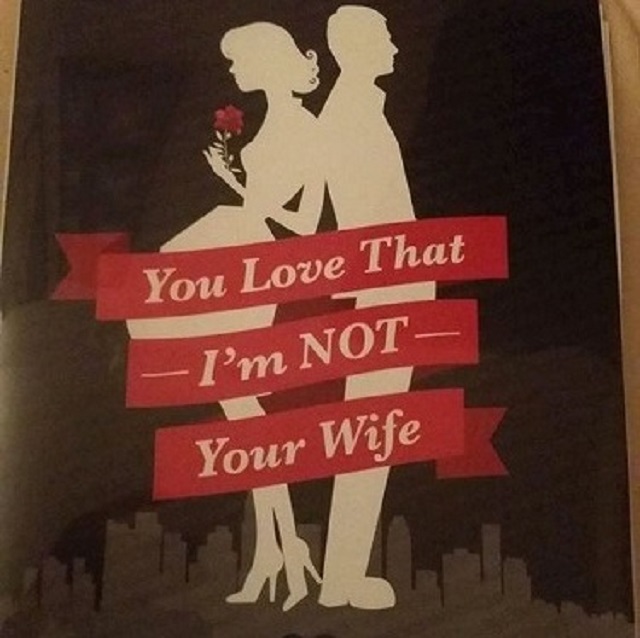 Photo of Logo by Jennifer K. Hugus for The Los Angeles Beat

Ever been so hell bent on staying with someone you ended up taking anti-depressants just to “live the dream”…?

Ah, Love…ROMANTIC LOVE:   It sure looks good doesn’t it? –On PAPER, (predominantly within the confines of the pages of a book, play, or movie script) but in the end it really doesn’t work does it?—(at least not in the all-too-self absorbed, and flaky Los Angeles!)  All manner of woven tales, theatrical, cinematic, or otherwise, have probably done it much too much justice over the years; save Joanne Mosconi in her newly penned, rivetingly refreshing, UN-romantic comedy, currently playing at The Avery Schreiber Playhouse; You Love that I’m not Your Wife. 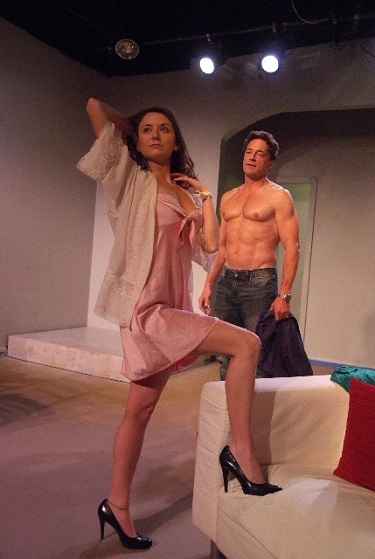 Set in Los Angeles with the city itself embodying the nth character, the general zeitgeist of the play’s geographical venue only adds to the couples’ strife.  Examining four pairs of lovers in varying stages of delusionment to disillusionment, all one can think while witnessing this play is, “Finally. Someone said it!”  Ironically—but happily–newly engaged herself, Mosconi’s program notes read as follows:  “…this story could only take place in La La Land, arguably the most lonely, non-committed city in the world. No one moves to or visits Los Angeles to fall in love.  Instead, beautiful, creative searching souls go to Los Angeles to chase ‘the dream’ and be someone…  I was inspired to write this piece last summer when I visited the Aeolian Islands of Sicily for the first time and fell in love with my ‘Amore’.  Few places in the world are as beautiful and magical as the Aeolian Islands.

Sophia Loren and Marcello Mastroianni, the most romantic and dynamic pairing of leading man and woman in our lifetime, also inspired this piece as their work resembles the passion, love and romance that belongs to Italy.  Italy is also very much a part of this play and serves as a secondary character.”

The play opens like any other as a couple of lively Marimba Inspired dancers alight the stage, informing us after their little jig, “If you’re with a date, grab some wine, if not grab two glasses!” (WELL, who says I can’t have BOTH?!?)  Attention will also be called to the lovely and glittery Hopscotch hair band/bracelets being sold in the lobby for tonight’s performance! 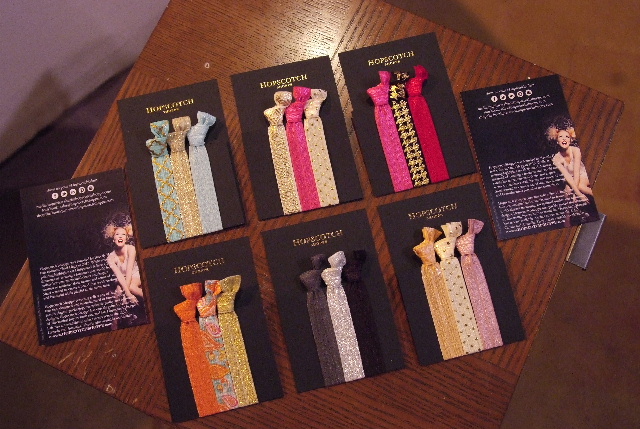 Okay, so Sophie’s “in love” with Dan who’s in love with his money and his meat (in the form of cheapness and vastly expensive steaks).  Nikki’s “in love” with herself and her legs but leaves a little room for the masculinely comely Johnny, who’s in love with his honeys, his money and his meat (in the form of other women, his photography wherein he can meet all manner of women, and well…just what you think). Lynn is in love with her job and her dresses and George in love with his screenwriting and video games as a diversion from his screenwriting, and the imagined love he thinks he can obtain from it.  Tony and Marie are in love with the idea of love/amore as the couple near symbolically named after the star-crossed lovers in West Side Story.  They will sing their way through Italy, before the demise of the pre-L.A. honey moon period that is their own little Disney Musical.  While Heather just “loves” men while being sure never to fall in love, Johnny and George love each other as brothers-in-law, and Sebastian merely loves to hear himself talk and make love while also quite possibly “loving” Nikki and Lynn.  Get any more intertwined than this and we’re hedging at a near sequential nod to Noel Coward’s “Not-So-Private-Lives”… 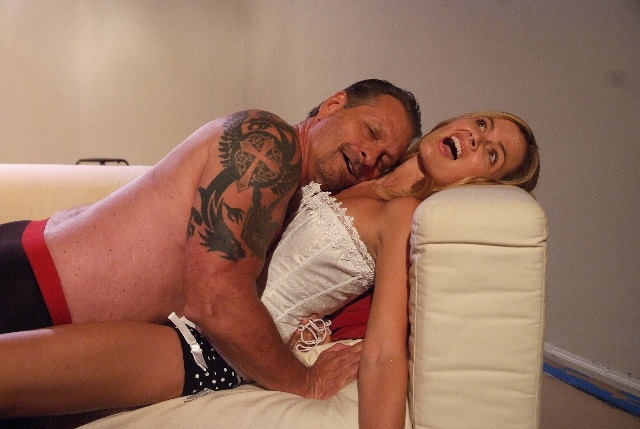 A most Ken and Barbiesque Nikki played by the comely Chelsea Blechman and Johnny (aka “Rick the Dick”) portrayed by an equally cumly (oops did I do that?) Michael Galante are close to one another in the most physical of senses, to both sensual and sordid effect!  Her pimple popping skills alone ought to account for something in the way of potential mundane wifery, but according to Johnny and his bullshit reasoning, “Nikki and I need distance in order to feel closer…” 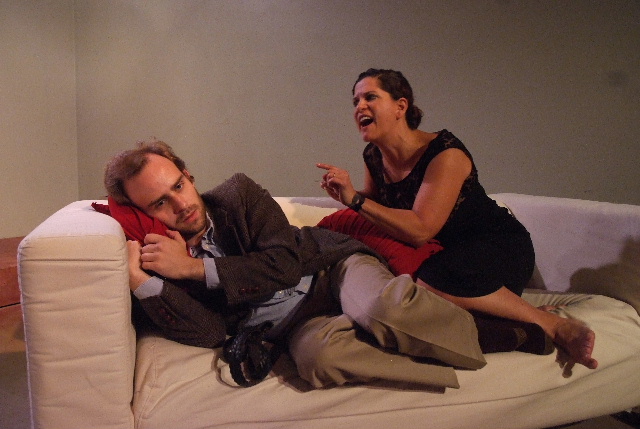 Lynn, portrayed by the deliciously insistent Vanessa Mesia, and George, played by the delectably angst ridden, David Pinson:  Lynn and George?  Well, they’re just a mess!  They’ll go to parties and Lynn will focus on the hottest woman there, get drunk and demand that George make love to her as that woman, “George I am your goddamned wife.  It is your job to fuck me!” Romantic huh?  As for George’s screenwriting, Lynn can only intone, “It’s okay that you’re not one of my favorite writers, you know that I love you!”  As far as Lynn’s career is concerned, I’m not even sure George knows what it is…

Tony Cicarelli (the only character with a first and last name, sounding almost like Cinderella) played by the 1940sish matinee idolish Blake Boyd, and Marie portrayed by the relatively sweet and innocent Amanda Rae Troisi, return from Italy ‘engaged to be engaged’ (seriously, who does that?) with only arguments to show for their erstwhile fairy-taleish, pre-post honeymoon era singing. It will later make itself suspect that perhaps Tony Cicarelli “has had orgasms longer than his relationships!” 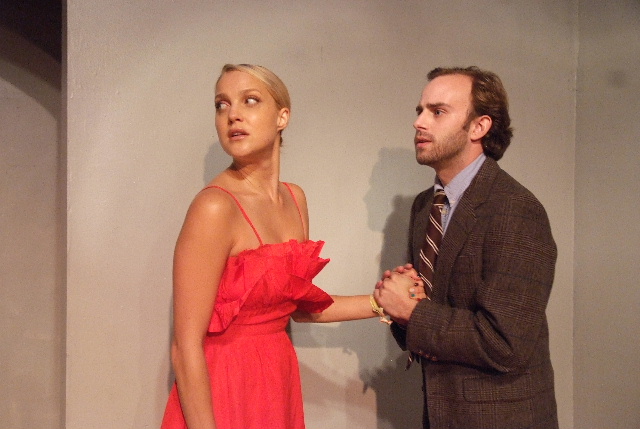 Heather, portrayed by the somewhat sprightly Charlotte Ellen Price, is merely the noncommittal actress/temptress to the finally appreciated writer in George, “I keep forgetting you’re married.  You don’t have that married energy; fat and bald.”  Irrespective of all this, she’d really much rather be balling Johnny and perhaps just might do so as he will no doubt rationalize it as a way to feel “closer” to Nikki after all.

And Sebastian, played by a refreshingly enthusiastic Rashad Davis?—Sebastian serves as the proverbial cougar-bitten boy toy, but really what he seems to represent is the somewhat singular and sage Greek chorus intoning various and gentle platitudes which no one chooses to heed irrespective of whether or not he is flexing his abs at the time…

If you’ve ever attempted to date, or have a substandard to mediocre relationship in L.A., this play’s for you! 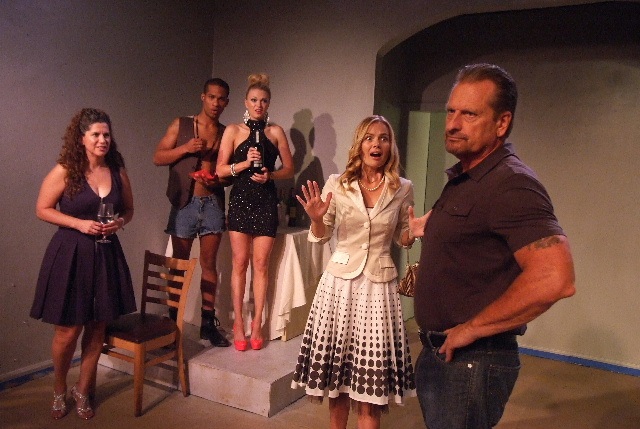 While there are not a lot of traditional “ha ha” jokes within the auspices of the script, the dialogue is sound, interesting and well paced, and the audience eats it up like the heartiest of hyenas!  As for myself, I am positively riveted by the story!

Mosconi’s writing and direction take the audience on a journey commensurate with her director’s notes and her assistant director Skype in the form of her beloved and adorable dog of the same name rounds out the supportive audience!  “She’s been in the audience for every show!” she will declare and it is certainly all the more of a homey and comforting environment with her there! Irrespective of any and all love related strife within the play, we ALL love SKYPE!

You Love that I’m not Your Wife runs Fridays and Saturdays at 8 pm and Sundays at 7 pm at the Avery Schreiber Playhouse through October 5th.

Jennifer K. Hugus was born at a very young age. At an even earlier age, she just knew she would one day write for the LA Beat! Having grown up in Massachusetts, France, and Denmark, she is a noted fan of Asian Cuisine. She studied ballet at the Royal Danish Ballet Theatre and acting at U.S.C. in their prestigious BFA drama program. She also makes her own jewelry out of paints and canvas when she isn’t working on writing absurdist plays and comparatively mainstream screenplays. Jennifer would like to be a KID when she grows up!
View all posts by Jennifer K. Hugus →
This entry was posted in Miscellanious, Theater and tagged Amanda Rae Troisi, Avery Schreiber Playhouse, Blake Boyd, Carrie Schroeder, Charlotte Ellen Price, Chelsea Blechman, David Pinson, Joanne Mosconi, Michael Galante, Paul Thomas Arnold, Rashad Davis, Skype Mosconi, Vanessa Mesia. Bookmark the permalink.