Movies ‘Till Dawn Christmas Creepshow: “At the Devil’s Door” 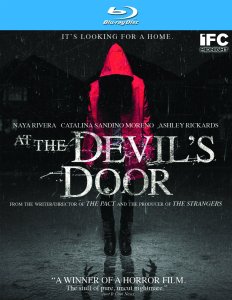 (2014, IFC) Full disclosure: I’ve known writer-director Nicholas McCarthy for more than a decade, and for some of you, reviewing his latest movie, “At the Devil’s Door,” may smack of cronyism. If that’s the case, there are plenty of other posts to read right after this one; for others, let me say that my intention is to simply direct you to a new horror picture that may have missed your attention during its brief theatrical run this year, and which fits nicely into the tradition of a supernatural story for the holidays. Both “Devil’s Door” and “The Pact,” McCarthy’s first feature, hinge on flawed (read: real) female characters whose confrontations with the trappings of adult responsibilities – family, home, sex – are manifested by baffling and powerful supernatural entities, which erupt from everyday environments. Here, it’s the California desert, and then a suburban tract house, that serves as the staging ground for a demonic entity’s campaign to, quite literally, make honest women out of the female leads. “Devil’s Door” gets a lot of shivery mileage out of suggesting awful things in the darker corners of the commonplace: there’s a swell bit involving a bedroom dresser in the first third, and the finale makes a house in mid-construction seem like an endless dark ride. McCarthy also repeats a neat trick of perspective from “The Pact” by shifting the focus of the film (and its monster) from jittery teen Ashley Rickards (“Awkward”) to real estate agent Catalina Sandina Moreno and then Naya Rivera (“Glee”), which does well to suggest the inescapable nature of the forces in question. There are also more than a few substantial jumps, some very impressive bit of suit and CGI FX, and brief but notable turns by Michael Massee (“Amazing Spider-Man”) as a sinister desert rat and the always-welcome Daniel Roebuck. Most impressive of all is a consistent tone of impending dread – a welcome alternate to the usual countdown-to-slaughter taken by most horror pics. The IFC Blu-ray includes commentary by McCarthy, and a making-of featurette in which he details a creepy conversation that served as the picture’s inspiration.

Paul Gaita lives in Sherman Oaks, California with his lovely wife and daughter. He has written for The Los Angeles Times, LA Weekly, Variety and The Fix, among many other publications, and was a home video reviewer for Amazon.com from 1998 to 2014. He has interviewed countless entertainment figures from both the A and Z lists, but his favorites remain Elmore Leonard, Ray Bradbury and George Newall, who created both Schoolhouse Rock and the Hai Karate aftershave commercials. He once shared a Thanksgiving dinner with celebrity astrologer Joyce Jillson, and regrettably, still owes the late character actor Charles Napier a dollar.
View all posts by Paul Gaita →
This entry was posted in Miscellanious. Bookmark the permalink.