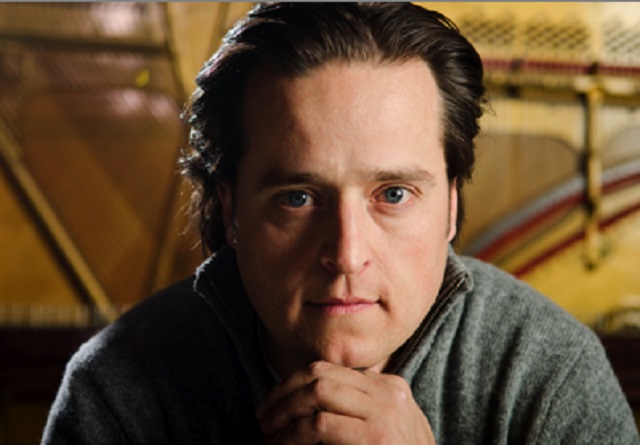 To say his music is beautiful would be an understatement—even a mite bit bland of a compliment considering how comparatively entertaining and textural it is. Throw in a good cause (only multiplying its beauty) and you’ve got Paul Cardall’s latest CD; Saving Tiny Hearts.

As a heart transplant recipient himself, not only the cause, but the style of the music is of most import. Fans have reported that his music “literally soothes the heart and nurtures the soul”.   Born with a perfectly functioning heart, Cardall’s unexpected discovery of his own congenital defect in culmination with a succession of challenging and related illnesses and surgeries have influenced his musical stylings, and encouraged further compositions and arrangements.

Album producer, founder of record label Stone Angel Music, and film scorer alike, Cardall recently attended the L.A. premiere of “Earl Hamner Storyteller” –for which he composed the score–surrounding the life and times of Mr. Hamner himself: legendary writer/producer who brought us such televised tales as The Waltons, Falcon Crest, Charlotte’s Web, and Lassie among various and sundry others. In February 2011, shortly after his 2009 life saving heart transplant, Cardall’s 13th Studio album, New Life, debuted as the number one New Age album on the Billboard charts and remained within the top five for over 30 weeks thereafter.  It was subsequently heralded as the best album of 2011 by various radio stations and reviewers.

Earlier in 2014 the internationally acclaimed pianist was welcomed into the Steinway & Sons circle of musicians, and shares the same noted honor with the likes of Billy Joel, Diana Krall, Harry Connick, Jr., Franz Liszt, Duke Ellington, and George Gershwin.

Ironically enough Mr. Cardall’s burgeoning career was almost cut short when, in 2009 he was informed that he would never survive without a heart transplant. But since then, it is evident that he has bounced back haler and heartier than ever and his most recent album as a tribute to a cause so near and dear to well…his heart is nothing short of phenomenal! One can only sense that Saving Tiny Hearts is not only a reparative endeavor, but a cathartic one as well.

The entire album reminds me of love; if love had a sound, and many-a-theme centers around time and travel—but not yet time travel combined. (Perhaps this concept will make itself apparent on his next venture, Now Having Saved Many Tiny Hearts?)

Album compositions that most stand out include; Gracie’s Theme to softly tripping piano plucks and sweeping strings prompting us all to wonder as to the exact identity of this unambiguously miraculous-sounding creature by the name of Gracie, Passing Time sporting notes like rolling waves or a gently revolving Merry-Go-Round, decidedly evocative of passing time itself!, Voices boasting rhythms reminiscent of real-world conversation, encompassing suspenseful note progression and a pleading violin in the background, Time-If the second hand on the clock made a sweeping and concentric sound, this would be it!, Coming Home-sonorously reminiscent of a bird soaring above a cloud—a cloud headed home perhaps?, Saints and Travelers-Vastly haunting with an intro somewhat evocative of Josh Groban’s “You Raise me Up” combined with an Irish ballad. One can nearly visualize distant hills, green valleys, and ghostlike moors, Our Love-Like a most suspenseful lullaby, Cardall’s all instrumental version of Scarborough Fair albeit a slightly more flowing version, the likes of which Simon and Garfunkel never quite conceived, Eye to Eye reminiscent of a light, optimistic dirge if that makes any sense; its slow and pulsing beat uplifting one’s imagination to a light soprano voice soaring high above the tent tops in most operatic yet modern fashion immensely similar to something I’ve heard backing varying and concentrated Cirque du Soleil acts involving steadfast exercises in most statuesque balance and flexibility.

Cardall’s music video, of the first song on the album; Gracie’s Theme released late in 2014 not only commemorates the anniversary of his surgery but also features many of the children he is trying to help in a chorus of innocently ethereal oohs and aahs:

Saving Tiny Hearts is currently being distributed by CDBABY, Deseret Book, and Stone Angel Music.  It is also available on Amazon.com, iTunes and most major online music stores including www.PaulCardall.com.

Jennifer K. Hugus was born at a very young age. At an even earlier age, she just knew she would one day write for the LA Beat! Having grown up in Massachusetts, France, and Denmark, she is a noted fan of Asian Cuisine. She studied ballet at the Royal Danish Ballet Theatre and acting at U.S.C. in their prestigious BFA drama program. She also makes her own jewelry out of paints and canvas when she isn’t working on writing absurdist plays and comparatively mainstream screenplays. Jennifer would like to be a KID when she grows up!
View all posts by Jennifer K. Hugus →
This entry was posted in Music and tagged Paul Cardall, piano, Saving Tiny Hearts. Bookmark the permalink.