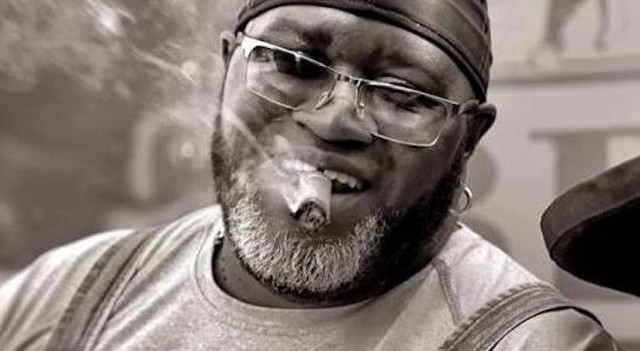 Big Moe Cason of Des Moines, Iowa, one of the top competitors in the BBQ world, always wanted to cook in California. “I’ve never done a California contest. The only time I was out in California was when I did the show ‘BBQ Pitmasters’ that was filmed in Calabasas, but that was for a show. I’ve never done a sanctioned cook off in California. I’ve never competed in California and and I’ve always wanted to get out there. I’ve been to New York, I’ve been to Texas and North Dakota, so far I’ve been to 35, 38 states for cooking contests, but California has been on my bucket list to get out there and cook”. That is about to change however, as Big Moe sets his sights on winning the Championship at the upcoming ‘Horsetown Brew ‘n Que’ in Norco that will be held from May 29 through May 31.

One of the things Moe is famous for in barbeque is his record of perfect 180 scores in chicken, pork ribs and pork shoulder. “My first 180 was in Gillette, Wyoming, back in 2012”, Moe said. “I had a perfect 180 score and to put the icing on the cake and make it even better it helped me win the ‘Smoke on the Prairie’ BBQ contest in Gillette. It was a great feeling, man! That was my first 180 and so I was just thrilled. It probably wasn’t a month, maybe month and a half after that, at ‘September Fest’ in Omaha, Nebraska, that I wound up getting a 180 in pork butt. To get a 180 is pretty tough, because basically you’ve got six judges that don’t talk amongst themselves as they’re judging, coming to the same consensus that what they judged was really, really good”. 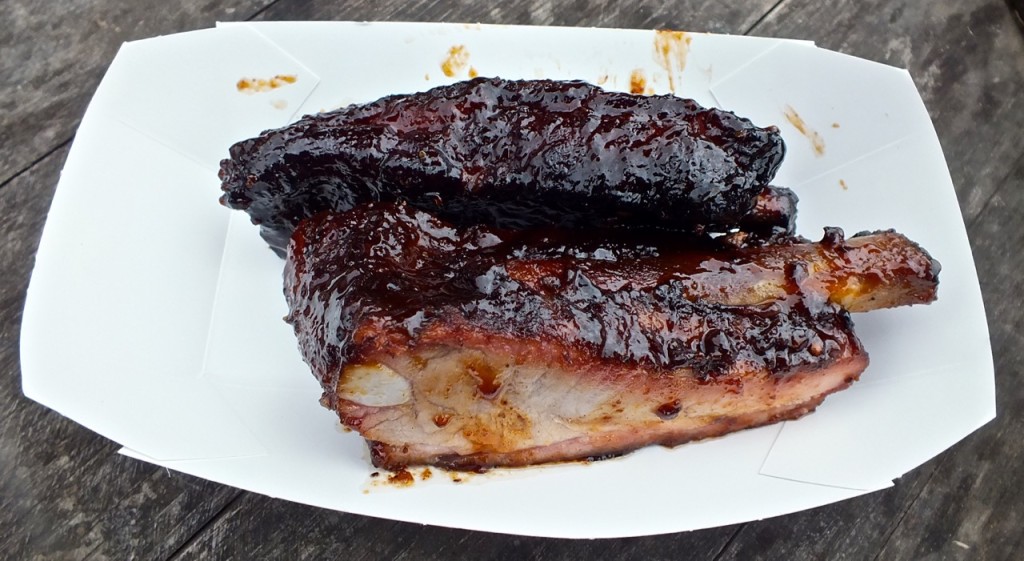 Yet there was one more entry in Moe’s trifecta of perfect scores. “Moe continued, “Then the following year I was down at Iola, Kansas—-I can’t really remember what town it was—–but I wound up getting a 180 in chicken. I actually turned in joint quarters, which is not the norm for competition guys on the circuit. The majority of guys will turn in thighs, maybe breasts or do legs and breasts, but generally 95% of the guys will turn in thighs. I really enjoy cooking quarters, it actually hurts me more than it helps me but that’s one thing about who I am. I’m a self-taught cook, I like cooking and like cooking what I like and I got a 180 cooking chicken quarters!”.

Moe explained why the joint quarters are so tough to compete with in competitive barbeque, saying, “generally you’re not going to do as well, because what happens is when you have a chicken quarter turned in, no matter how well it’s cooked, that leg and that thigh are almost too much for that judge to think about. They just want to pick up the product, bite and then move on. When you’ve got a leg and thigh it’s so awkward because there’s only one side of that quarter that you want to get a good bite of. The other side of the quarter, it’s hard to get a good bite of because the leg winds up touching your face. Also, the backside is not as meaty as the side facing the actual leg. But I like cooking them! It’s one of those things, I’m kind of stubborn on that aspect, but I think they taste great and look great. When you put those six quarters in a box they really look pretty. But it’s just too much for judges to think about—where to bite it, how to pick it up, so now I’m just starting to cook thighs”.

Moe is coming to Norco, but he’s got a certain attitude about what he will and won’t find there with the other competitors. He said, “I never, never look out for other teams. I’ve never been a person who’s been star-struck by a team, even when I first started competing. There are guys who I have respect for, but I look at them as just cooks. I’m a cook, they’re a cook, I don’t ever walk into any contest and there’s guys who have won a billion more contests than I ever have but I still don’t look at them being any different than me. No matter what you did in the past, all that matters is what you’re going to do today. When I go to a contest, it’s always zero zero. So I don’t ever look, ‘Oh, so and so’s here’ and I’ve never, ever—I’ve got a badge of honor on that”. 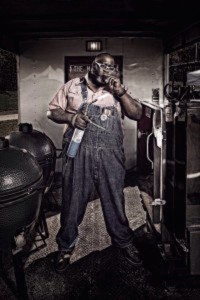 Moe does have several reasons for coming to the ‘Horsetown Brew ‘n Que’, saying that “ I’m a kind of guy that’s just known to go anywhere. I’m generally a KCBS guy but I like cooking different sanctions and going to different parts of the country. You may get a lot of guys who will laugh at you in the beginning, but I’m a real barbeque guy. I really enjoy barbeque. A lot of guys go out there, they just turn and pick, they just don’t try, they don’t want to get out of their comfort zone. If they want to cook the same way all the time, that’s fine and dandy. But I like exploring, going to different parts of the country, cooking against different teams. I think in the end it makes you a more rounded cook. For me it’s satisfying. There are some contests that I go back to year after year because I like the organizers and I just enjoy it. I’m looking forward to coming out and meeting new friends, cooking against new people and and having a really good time against friends”.

Moe explained why it is so difficult to get those perfect 180 scores in a barbeque competition. He said, “To get a 180 is pretty tough, because basically you’ve got six judges that don’t talk amongst themselves as they’re judging, coming to the same consensus that what they judged was really, really good. For them to give you straight 9’s—-the scoring system for the KCBS (Kansas City Barbeque Society, the event sanctioning organization) is 1 through 9, with 6 considered as the starting point. That’s considered average barbeque and then it goes 7, 8, 9 and 9 is considered really great barbeque”.

Moe continued, saying, “Then you get judged on appearance and then taste and tenderness. A judge will write down three scores in each category, so if it was beautiful in the box when you opened the clamshell up, so beautiful it wowed the judges, it was really impressive, the meat looked appetizing so you wanted to get in after it, the judges are going to go on and give you a 9. That’s one thing when it comes to barbeque contests, that’s 3 points. That’s before any judge actually puts their fingers on that piece of meat and puts it in their mouth. You should try to do the best you can to make a very appealing box that makes the judge just want to dive in instantly, to grab. And then you get judges on the taste. That’s all subjective, you’ve got six random judges and if you happen to hit the flavor profile that they really like that’s great”.

Moe explained about one of the most important parts in the scoring, saying “And then there’s tenderness, that means that you have to make sure you cook the product really good, because no matter how good a taste, if the tenderness is not there you’re not going to do any good. So what I tell people, young cooks or guys getting into the competition game, is to make sure you nail your tenderness because your flavor profile is your flavor profile—-you go all over this great country and there are different flavor profiles all over. But you need to know tenderness! That’s really important. The flavor has to be there, obviously, but you’ve got to have tender meat, meaning that no matter what category you’ve turn in it’s got to be as near perfect as you can make it. For ribs, pork shoulder, brisket, chicken, the tenderness is really big. So I got that”. 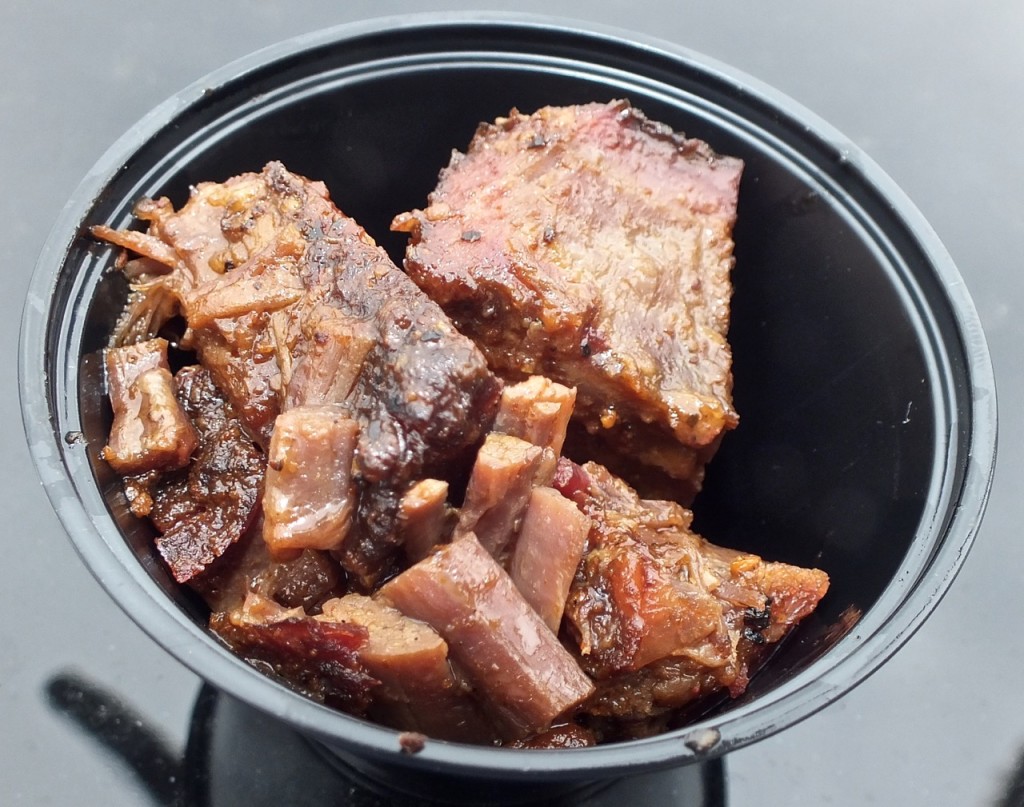 Moe certainly does get barbeque. After serving in the U.S. Navy aboard the U.S.S. Missouri during Desert Shield and Desert Storm, Moe returned to his hometown of Des Moines, Iowa and entered his first BBQ competition in June 2006. His team, Ponderosa BBQ, is named after the title the old residents gave to his neighborhood. Since then, he has won numerous Grand Championships and Reserve Championships in many states, earned a spot judging on Destination America’s hit TV show, ‘BBQ Pitmasters’. He competes in over 20 contests a year, with wins all over the country. Big Moe uses an ‘Ole Hickory Pits’ wood burning BBQ and the venerable ‘Big Green Egg’.

Big Moe Cason won’t just be in Norco to compete, but he will also share the spotlight Friday night with fellow barbeque expert Myron Mixon at the opening night VIP event, ‘Meat and Greet’. Both of them will be there to visit, whether it’s just to say hello, answer some questions or to impart some words of barbeque wisdom to other competitors. This will be an excellent chance for barbeque fans to meet Big Moe, who is certainly on of the most approachable competitors on the circuit. The ‘Meat and Great’ will feature catered food and top quality beverages to enjoy. Advance reservations are needed and are available through the ‘Brew n’ Que’ website.

Saturday will be both the day of the barbeque cook off and also the accompanying Brew Festival. Over 70 top teams are scheduled to compete in the cook off and the aroma of delicious BBQ will fill the air. Sample tickets may be persons so that guests can try many of the offerings that will be available. Many local micro and craft breweries will be also sampling their beers, some which have been brewed exclusively to commemorate the festival. Also on Saturday, live music from artists including Ray Brooks, the Blue Henrys and Tessie and the Calico Cats will fill the area. A Pig Beauty Contest and a kid’s area will ensure that there is something for everyone. There will also be a Kid’s Que competition to see who the best junior cook is.

Several other special events such as a Brewing 101 Class and a Certified BBQ Judge Class are available on Sunday. As Big Moe Cason said, “It looks like it’s a really nice venue. I’ve been to festivals where it’s been a beer and wine festival along with a barbeque contest and I think it’s going to be really nice”. So just listen to Big Moe Cason and come on down to the ‘Horse Town Brew n’ Que Festival. You’ll be glad you did!

Ed is a native of Los Angeles who loves food and food cultures. Whether he's looking for the best ceviche in Colombia, the best poke in Hawaii, the best tequila in Jalisco or the best Taiwanese Beef Roll in Los Angeles, it's all good food! He also loves a good drink. He's had Mai Tais in Hawaii, Bourbon in Kentucky, Tequila in Mexico and Rum in Jamaica. His wine escapades have taken him to Napa, Sonoma, the Willamette Valley and the Santa Ynez Valley. And he's had beer all over the world! Music is another of Ed's passion, writing and interviewing many classic rock, rock and blues musicians. Getting the great stories of road experiences from them is a particular delight. Traveling also fits in with Ed's writing, exploring all over to find the most interesting places to visit, even in out of the way areas.
View all posts by Ed Simon →
This entry was posted in Events, Food, Miscellanious, News & Sports, Upcoming Events and tagged barbeque festival, BBQ Pitmasters, Big Moe Cason, Ed Simon, Horse Town Brew n' Que, Moe Cason, Norco. Bookmark the permalink.