Heart At The Bowl: A Funny Thing Happened On The Way To A Zeppelin Show 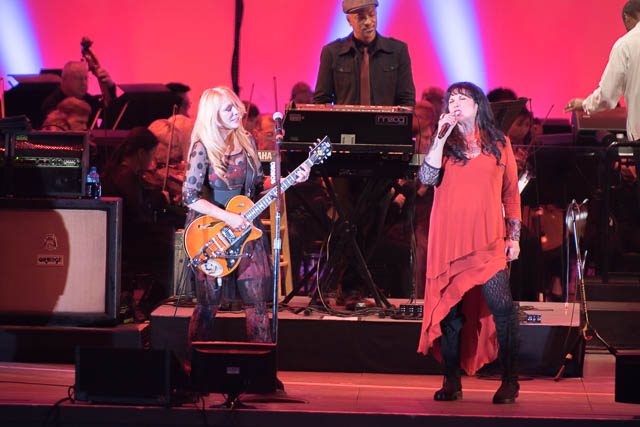 Heart at The Bowl

Here we are again music fans, another night at one of my most favored venues, The Hollywood Bowl. A pearl in the necklace of Los Angeles. How can one be seated here and not be moved by the history and ambience of the theater? This is the place I saw on my tiny little black and white TV way back then when Ann Margrock did the Watusi with Fred Flintstone. The Bowl isn’t just a venue, it’s a living, breathing thing and I love this place!

Liv Warfield was the first act here tonight. In what can best be described as Grace Jones look with a horn section that would make Henry Mancini jealous, we were given a portend to the evening by Ms. Warfield. With some very lush horns, incendiary guitars, and a very cool Hollywood Bowl Orchestra led by Thomas Wilkins, Liv Warfield was a good choice to open the evening. Why? I think this kind of music goes down great at the Bowl. To quote myself; ‘I love opening bands, they open you up to new music”. I am not the least bit surprised that she was selected by Prince as a member of his New Power Generation.

Now, I can’t be familiar with every band, but I did my research, and did my listening. I’ve read other writers talk of being hard-pressed to describe the show, and now I fully understand. What I heard prior to tonight on the internet was good, but this is one live act you have to HEAR to appreciate. If you like your music with a jazzy, big-band-ish sound, you would have loved this show. All you need to do is put together the sound of all those horns and that voice, and the acoustics of The Bowl and you have for one exciting band. The Hollywood Bowl was after all built for exactly this kind of music. It’s funny how that can work out sometimes. I would have liked to have heard more horns and less strings at times, but it’s still an amazing feat of auditory engineering, how they manage to mesh up the orchestra and the band. Liv Warfield laid it down, belted it out, and PRODUCED! I’m putting her album on my list.

So now on to Heart. The last time I saw heart in person was at the Rock Hall induction at The Nokia Theater, where they stood there, got their due, and ripped out a few numbers. I’ve always been of the opinion that this band is what would have happened if Page and Plant had been women, and not just for the music or because we know Heart idolized Led Zeppelin. Heart saluted Led Zeppelin at the Kennedy Center Honors a few years back and moved Robert Plant to tears. That’s not it though. If you really studied Page, you saw he held the guitar just a bit lower than the other players, he swung it around himself in a way that can’t be put into words. He had a swagger. Nancy Wilson has that swagger. She always did. Does she play like Page? Thankfully, no. Now, before you get ready on the “hate button”, I mean that in the most complimentary way to both players. Nancy is cleaner in her approach and I for one am glad she’s not trying to knock off Jimmy. You can be inspired, and it’s clear where she get her’s. At one point, she sat down and played her acoustic with a bow in another nod to Mr. Page.

Prior to my entrance to the venue I saw more “Led Zeppelin” and “Zoso” T-shirts on concertgoers than I did “Heart” shirts. Interesting crowd…Did they come here to hear “Heart-plays-Zeppelin”. Fortunately for the fans, they were not to be disappointed. Their opening number, Kashmir, was done in the same manner as Page/Plant did it back in 1995, with the full string orchestra. The complete rework from the “No Quarter: Unledded” sessions. Later in the evening, they busted out “Stairway To Heaven” with the strings again. I guess they didn’t see the “NO STAIRWAY” sign. I would have preferred “Rock And Roll” as the closing song, but maybe the band feels it’s become rote.

At one point, the band introduced “this next song is something you probably heard at the mall, or in an elevator”, and jumped into “These Dreams”. Exactly! Even the band gets it and is in on this one. But there are many who adore the ballads and you want to please everyone.

Introducing one song as “something that Bernie Taupin wrote” they played the classic Elton John song “Mona Lisas And Mad Hatters”, with Nancy describing the song as evoking trips through Manhattan, seeing the taxis lined up. Was she having her “Almost Famous” moment on stage in front of us? This song was always a favorite for me, but every time I hear it, I can see the scene near the end of “Almost Famous” and I’m thinking she does too. Maybe the fact that she was with Cameron Crowe and probably helped with the edits has something to do with it.  In any case, “Mad Hatters” was actually the highlight of the evening for me. It was beautifully done.

The usual lineup of crowd-pleasing hits were there, fans were swaying along to some numbers, rocking out to others, and cheering loudly for the ballads.  As for the musicality, it’s great that time has done little to dampen the voices of Heart, in the way you would see this with their progenitors.  Their voices sound as vibrant as ever, the keys are still the same and Heart still puts on a fun show. Good job ladies!  Thank you Heart for your musicianship and for introducing us to Liv Warfield! 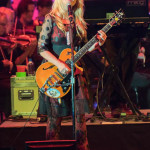 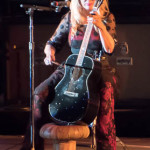 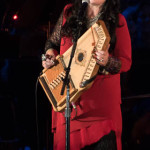 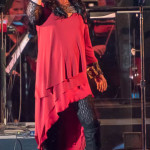 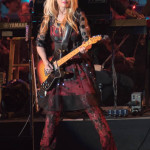 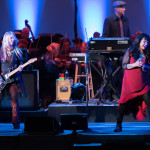 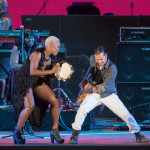 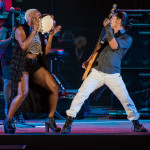 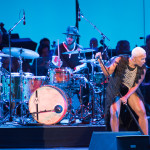 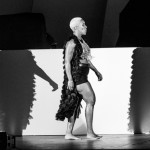 Ivor Levene likes to interview musicians, write about music and musicians, play music, listen to music, read about music, photograph musicians, and anything else you can think of with music. He has been involved with the music scene for over thirty years and his posts have appeared all over the place! Ivor says "I'm going to write about music as long as I have something to say".
View all posts by Ivor Levene →
This entry was posted in Miscellanious, Music and tagged #heart, #hollywoodbowl, #livemusic, #livemusicphotography, #livWarfield, photography. Bookmark the permalink.