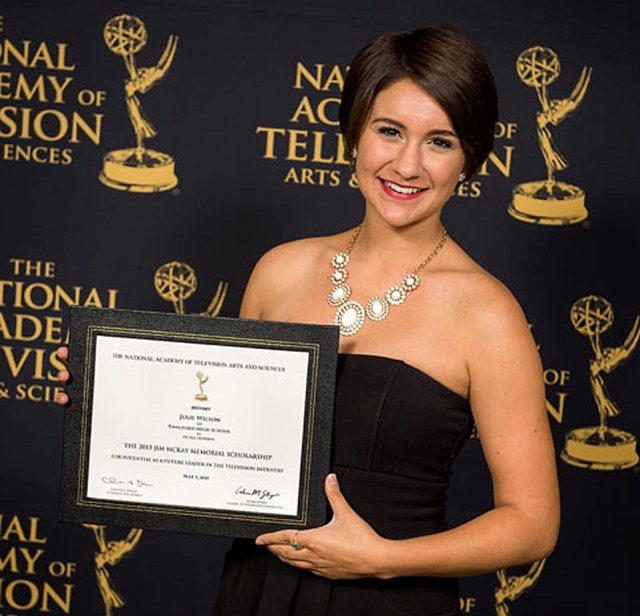 And…please stay tuned: For now comes the time of year when the National Academy of Television Arts and Sciences dispenses all manner of honor regarding every facet of the respective television industry, but also recognizes its up-and-comers in the form of noted and prestigious College Scholarships! Even more exciting, NATAS has just expanded said scholastic agenda with its latest award distinguishing Hispanic or Latino students with emergent careers in television!

The $10,000 annual educational endowment, entitled the Randy Falco Scholarship, is gifted to a Hispanic or Latino student pursuing a career in any facet of television production. Involving a minimum six year commitment, it distinctively honors trade contributions made by none other than Randy Falco himself: Current and lauded President and C.E.O. of Univision Communications Inc.

Other noted scholarships for high school seniors intent on following a path in the wonderful world of television include:

–The Jim Mckay Memorial Scholarship in the amount of $10,000 presented to an undergraduate following a career in sports coverage.

–The Mike Wallace Memorial Scholarship of $10,000 granted to a scholar dedicated to a career in journalistic television.

–The NATAS Trustees’ Scholarship in the value of $10,000 awarded to a coed pursuing a profession in any field of the television industry.

In its fourth year, the Mike Wallace Memorial Scholarship, financed with a five-year endowment from CBS News, recognizes renowned correspondent Mike Wallace (1918-2012). It is awarded annually at the News & Documentary Emmy® Awards.  The Jim Mckay Scholarship, now in its 7th year, lauds Jim McKay (1921-2008), sportscaster extraordinaire and was founded in 2009 by and in conjunction with the HBO, CBS, NBC, ABC, and FOX broadcasting companies.  This prestigious honor is presented at the Sports Emmy® Awards each May.

“Starting with his branding of NBC as the ‘network of the Olympics,’ leading the initiative for the NBC-Universal merger, and now as he continues to transform Univision from a niche broadcast network serving all aspects of the Hispanic community as well as multicultural and millennials, Randy Falco’s done it all,” exclaims Chuck Dages, Chairman, NATAS. “This scholarship seeks to recognize his trailblazing career by advancing the future career of a young visionary.”

“The key to increasing diversity in our industry is access – something that Univision has worked on for close to 60 years. That is why I could not be prouder of this scholarship program to make sure that students have access to financial resources that will help them succeed,” declares Randy Falco, president and CEO of UCI. “I want to thank everyone at NATAS for helping me achieve my mission of increasing diversity by creating more opportunities for future leaders in our industry.”

So if you’re an aspiring college coed and arriving artist in televisional talent—don’t miss the national scholarship deadline of 5 pm EST, Monday, March 21, 2016. Instructions and online entry forms can be found at:  http://emmyonline.org/scholarship .  Applications and artistic entry projects will be reviewed by National Academy of Television Arts and Sciences (NATAS) Trustees and representatives in culmination with UCI on the Randy Falco Scholarship.  Determined choices for all awards will be finalized in late April!

Jennifer K. Hugus was born at a very young age. At an even earlier age, she just knew she would one day write for the LA Beat! Having grown up in Massachusetts, France, and Denmark, she is a noted fan of Asian Cuisine. She studied ballet at the Royal Danish Ballet Theatre and acting at U.S.C. in their prestigious BFA drama program. She also makes her own jewelry out of paints and canvas when she isn’t working on writing absurdist plays and comparatively mainstream screenplays. Jennifer would like to be a KID when she grows up!
View all posts by Jennifer K. Hugus →
This entry was posted in Television and tagged Emmy Awards, NATAS, Scholarships. Bookmark the permalink.