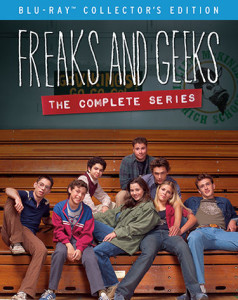 (2000, Shout Factory) Mathlete turned aspiring underachiever/freak Lindsay (Linda Cardellini) accepts an offer to visit the home of tough girl Kim Kelly (Busy Phillips), thinking that it will help her fit in with her new friends, while her brother Sam (John Francis Daley) grapples with the notion that he might be the geekiest among his friends (Sam Hamm and the remarkable Martin Starr) when he’s targeted by a bully (Rashida Jones) who also happens to be a girl. Paul Feig and Judd Apatow’s much-loved and short-lived series never shied from folding dramatic elements into its coming-of-age comedy, but this episode, penned by Mike White (who also appears as Kim’s addled, couch-bound brother), pushes its characters into uncomfortable face-offs with issues of social standing and class (the afternoon at Kim’s house, which blooms from passive-aggressive comments about Lindsay’s home and family into a brawl with mom Ann Dowd of “The Leftovers” and stepdad Jack Conley, is one of the series’ most cringe-worthy moments) and how they perceive their friends (and are perceived by them). It’s heady material for a single-camera comedy – which is why NBC initially refused to air the episode – but White’s script strikes the right balance between humor and pathos, helped in no small part by Phillips’ performance, which reveals the depth of sadness beneath her prickly exterior; its blend of depth and humor and brutal honesty also underscores why “Freaks” continues to stand as one of the best shows about high school and small town life ever made for TV. “Kim Kelly” is included in Shout Factory’s new “F&G” complete series Blu-ray set, which ports over the wealth of extras from its Yearbook DVD (commentaries, screen tests, deleted scenes) and adds new interviews with Feig and Apatow, as well as a new widescreen presentation of all episodes. 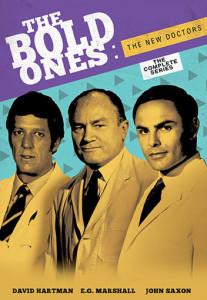 (1970, Shout Factory) Jerry Lewis directed this second season episode of Steven Bochcho’s popular NBC medical drama, which finds crusading physician/father figure E.G. Marshall and his hot and cool assistants (John Saxon and David Hartman, respectively) taking on two cases of the comedian’s favorite cause: muscular dystrophy. As expected, Lewis pours on the syrup for the storyline involving a young boy (Jason Karpf) who struggles with the immobility associated with the disease, and parents Arch Johnson and Joanne Linville, who chew considerable amounts of scenery as they agonize over his condition; the B-story, with Lincoln Kilpatrick as a golf pro who refuses to accept his diagnosis, shows a bit more restraint. “Doctors” was the most successful of NBC’s four wheel series grouped under its “Bold Ones” umbrella title (the others – “The Protectors,” “The Lawyers” and “The Senator” – are all available on DVD from Shout), lasting for its entire four-season run between 1969 and 1973. Shout’s nine-DVD set for “The New Doctors” includes all 33 hours of the series, including the second of a two-part crossover episode that began on “Ironside,” whose star, Raymond Burr, produced “The New Doctors” through his Harbour Unlimited shingle with Universal TV.

2 a.m. “The Brotherhood of the Bell” – Thriller 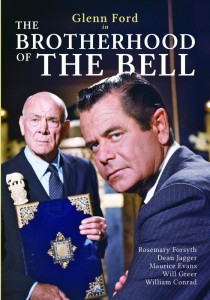 (1970, CBS Video) Glenn Ford stars in this paranoia-fueled TV movie as a college professor whose membership in the titular secret society has granted him success and happiness. When he refuses to carry out a request to blackmail a colleague, the Brotherhood turns against him, and in rapid succession, Ford loses his wife (Rosemary Forsyth), his father (Will Geer), his job and his reputation. Parallels between the Brotherhood and real fraternal societies, like Yale’s Skull and Bones (whose members include George H. W. and George W. Bush), with alleged designs on world domination inform this claustrophobic thriller; not surprisingly, it’s a favorite among conspiracy theorists. With William Conrad (blowhard talk show host), Dean Jagger (sinister senior entity) and Rosemary Harris (faithful wife, up to a point) Director Paul Wendkos (“The Burglar”) offered a more literal take on deals with the devil the following year in “The Mephisto Waltz” (1971), with pianist Alan Alda gaining fame and Jacqueline Bissett after signing over his soul to a diabolical Curt Jurgens. Pomona College stands in for the Brotherhood’s fictitious headquarters. 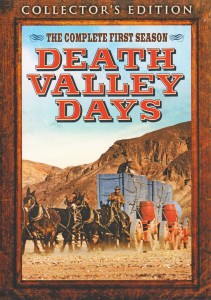 (1952, Timeless Media Group) The inaugural episode of this long-running (1952-1970) syndicated Western series is based on the real-life journey of the Bennett-Arcane party, a group of would-be prospectors who nearly succumbed to heat and exhaustion while trying to cross the titular stretch of desert in 1849. The script by Ruth Woodman takes liberties with the source material, forging a chaste romantic triangle between guide Lewis Manley (veteran screen cowboy Brad Johnson), Phyllis (“Superman”) Coates’ platinum blonde pioneer and her tenderfoot husband (Kirkley Riley), but mostly sticks to the facts, including Manley’s 500-mile trek to find water for the stranded party. The historical angle was, and remains, the chief appeal of the show, which ran in syndicated reruns (narrated by Merle Haggard) until 1975; Woodman, a former ad agency writer who created the show for radio before bringing it to TV via Gene Autry’s Flying A Productions (which oversaw production for its first two years), claimed that all 425 episodes were based on some degree of fact. Timeless Media’s three-disc set includes all 18 episodes of its debut season, which feature cracker barrel narration by Stanley Andrews’ Old Ranger; when he left the series in 1965, he was replaced by several hosts, including Ronald Reagan, who left the show after a year to serve as governor of California. 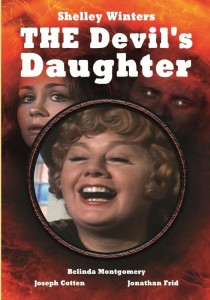 (1973, CBS Video) To her dismay, Belinda J. Montgomery discovers that the kindly if eccentric Lilith (Shelley Winters), who took her in after the death of her mother (Diane Ladd), is at the center of a Satanic coven who believe her to be the spawn of Satan and the prospective bride of a demon. Though indebted to “Rosemary’s Baby,” this ABC Movie of the Week is a satisfying mix of camp and chills, with Winters shouldering the lion’s share of both in a performance that veers from purring menace to furnace-intensity fury at a moment’s notice. She’s well supported by a cast of old pros that includes Joseph Cotton (sinister judge), Jonathan Frid (sinister mute butler), Robert Foxworth (sinister fiancé), Lucille Benson and jazz singer Thelma Carpenter (sinister siblings) and Abe Vigoda, of all people, as the coven’s sinister leader. Veteran TV director Jeannot Szwarc (“Jaws 2”) brings a degree of creepy atmosphere to the proceedings, and surpasses most of the blithe silliness in the script by Colin Higgins (“Harold and Maude”), like the enormous portrait of Satan hanging in Lilith’s home, which somehow fails to tip off Diane to her intentions. As such, it’s a worthwhile watch for ‘70s made-for-TV horror devotees and satanic cinema completists. Exteriors for the film were shot in and around Pacific Grove and Carmel. 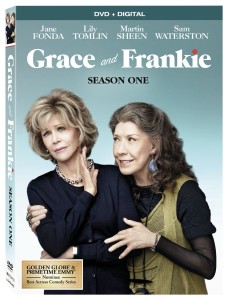 (2015, Lionsgate) Crisp writing and performances highlight this clever Netflix comedy with Jane Fonda and Lily Tomlin as diametrically opposed acquaintances that are thrown together when their husbands (Martin Sheen and Sam Waterston) leave them for each other. “The Dinner” finds Grace (Fonda) and Frankie (Tomlin) settling into their new shared living arrangement and attempting to reset their lives by returning to their pre-marriage careers; Sheen and Waterston, meanwhile, have arranged a dinner for their children – Brooklyn Decker and June Diane Raphael as Sheen’s daughters, and Ethan Embry and comic Baron Vaughn as Waterston’s adopted sons. All four children have tremendously complicated relationships with each other, and the dinner, meant as a reset, instead lights a slow-burning but ultimately satisfying explosion. The series, created by Marta Kauffman (“Friends”) and Howard J. Morris, makes smart and trenchant observations about age and marriage and family that avoid preachiness; the cast is uniformly excellent and sells even the few less effective moments. The three-disc Lionsgate set includes commentary by the cast and creators, a making-of featurette and the prerequisite gag reel (which is pretty funny).

Paul Gaita lives in Sherman Oaks, California with his lovely wife and daughter. He has written for The Los Angeles Times, LA Weekly, Variety and The Fix, among many other publications, and was a home video reviewer for Amazon.com from 1998 to 2014. He has interviewed countless entertainment figures from both the A and Z lists, but his favorites remain Elmore Leonard, Ray Bradbury and George Newall, who created both Schoolhouse Rock and the Hai Karate aftershave commercials. He once shared a Thanksgiving dinner with celebrity astrologer Joyce Jillson, and regrettably, still owes the late character actor Charles Napier a dollar.
View all posts by Paul Gaita →
This entry was posted in Television and tagged CBS Video, Lionsgate, Netflix, shout factory, Timeless Media Group. Bookmark the permalink.