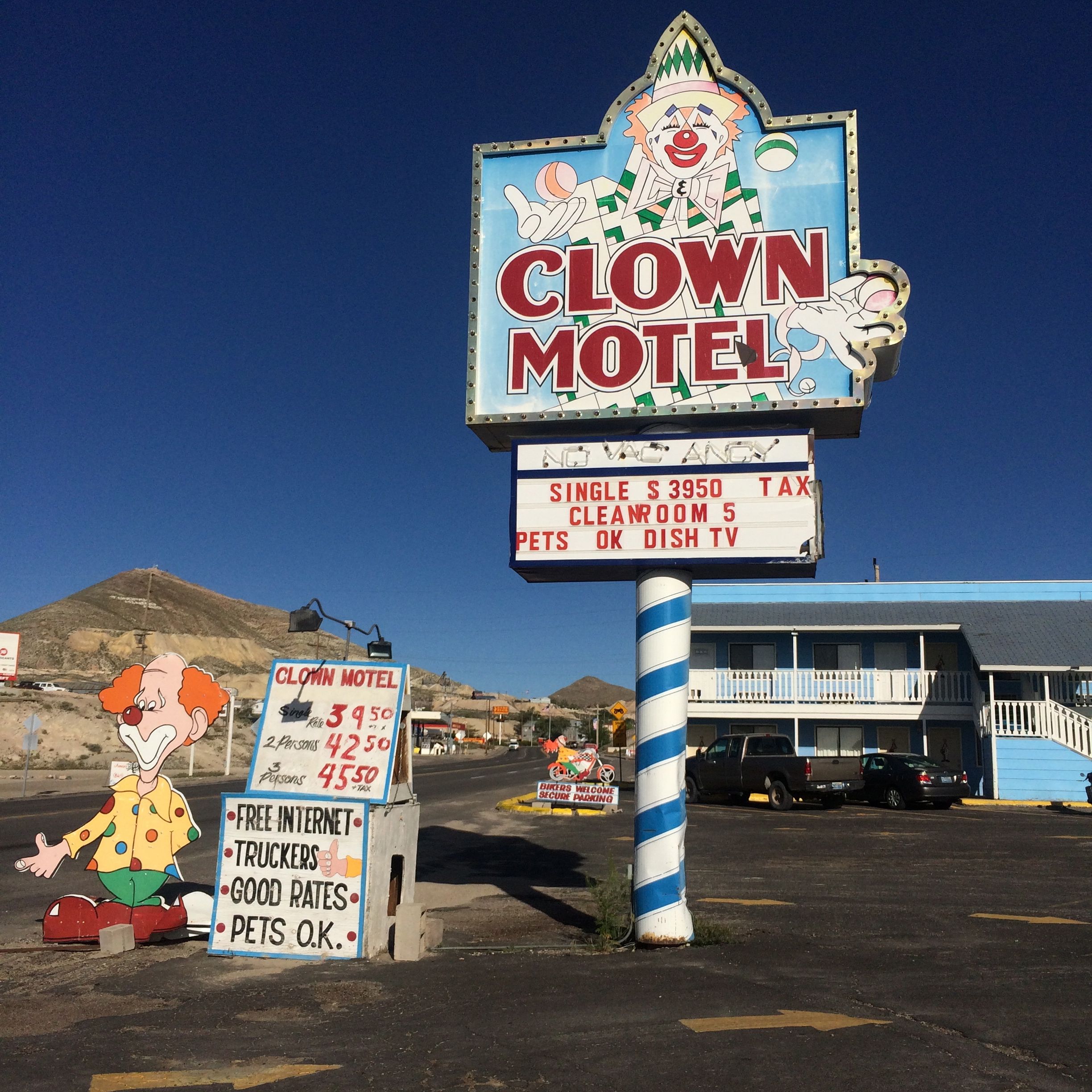 Send in the Clowns… Tonopah, Nevada (photo by Nikki Kreuzer) 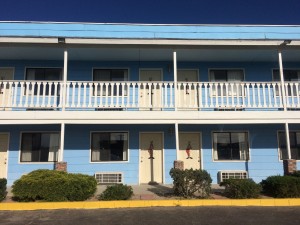 Not your average circus tent… (photo by Nikki Kreuzer)

The desert winds, warm and caressing, whisper secrets as they blow across the sun-bleached Western Nevada landscape. This terrain is a place for loners and outcasts, a final resting place for slowly rusting abandoned vehicles, a location where cold-blooded serial killers might hide their murdered bodies, where meth labs stealthily cook their poisonous product in derelict cabins and where thin beams of sunlight squeeze through cracks in crumbling walls… It is also home to The Clown Motel, a motor inn completely themed around the red-nosed circus character that is at once beloved and shunned. 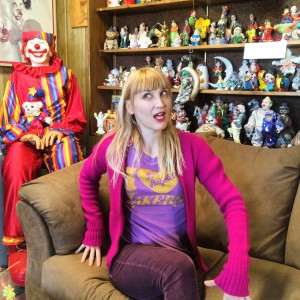 The author, caught off guard, in the motel lobby. Did something just move? (photo by Sharlynn Vee)

To some, clowns represent fun, joy and frivolity; to others, they conjure nightmare images of fear and uncertainty, but most, I believe, walk the tightrope wire somewhere in between. Clowns can be good or bad, depending on their context. Merriam-Webster Dictionary has even added the word Coulrophobia, fear of clowns, to its collection of definitions. Given the odd role of clowns in our collective American imagination, in which they are intertwined with psychopaths (John Wayne Gacy) or horror movies (Captain Spaulding in Rob Zombie’s “House of 1,000 Corpses”), why a Clown Motel? And why in the middle of literally nowhere, Tonopah, Nevada, pop 2,478? 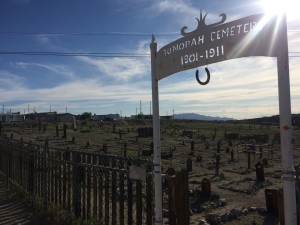 Tonopah is a speck on the map exactly mid-way between Reno and Las Vegas and 381 miles from Los Angeles. The story of its founding is like a bizarre folk tale. Apparently, around 1900, a prospector lost his burro and after searching, found her by some large boulders. Picking up a stone to throw at her, (long before the days of PETA), he realized the weighty rock was silver, and he had discovered the second richest silver strike in Nevada history; the town of Tonopah was founded. Its population soared to about 40,000 during the silver mining era, but gradually dwindled, making it somewhat of a ghost town. And speaking of ghosts, what could make a Clown Motel possibly more sinister and suspect? If you’re thinking, a graveyard next door, then bingo! The Tonopah cemetery, immediately outside the Clown Motel’s window, was only used for the first 1o years that the town existed. Its wooden tombstones and tin plaques include victims of a 1911 mine fire and many more who died from the 1902 “Tonopah Plague.” 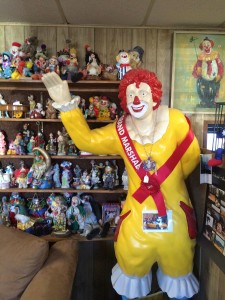 Talking to the friendly and down-to-earth desk clerk, I found out that this collection of clowns was started here in the 1940s and their presence became the theme of this motel after it was purchased by its current owner in 1991. The lobby contains over 500 clown figurines and the number keeps growing through donations sent from far and wide. The rooms are each centered around a specific clown portrait, but not as elaborately decorated as the lobby. The desk clerk also weighed in on the haunting of another Tonopah landmark, the 1907 built Mizpah Hotel, which was the tallest building in Nevada until 1929. She told me that there are seven entities known to exist at the hotel, which was named after the Mizpah Mine, and she, herself, had met up with several. That information was more than enough to give me an uneasy feeling about Tonopah, though I’m sure there are many braver than me. As my friends and I left this dusty town and encountered hollowed-out car frames at the end of several cul de sacs, we decided that if ghosts really do exist, we are quite sure they are haunting Tonopah. 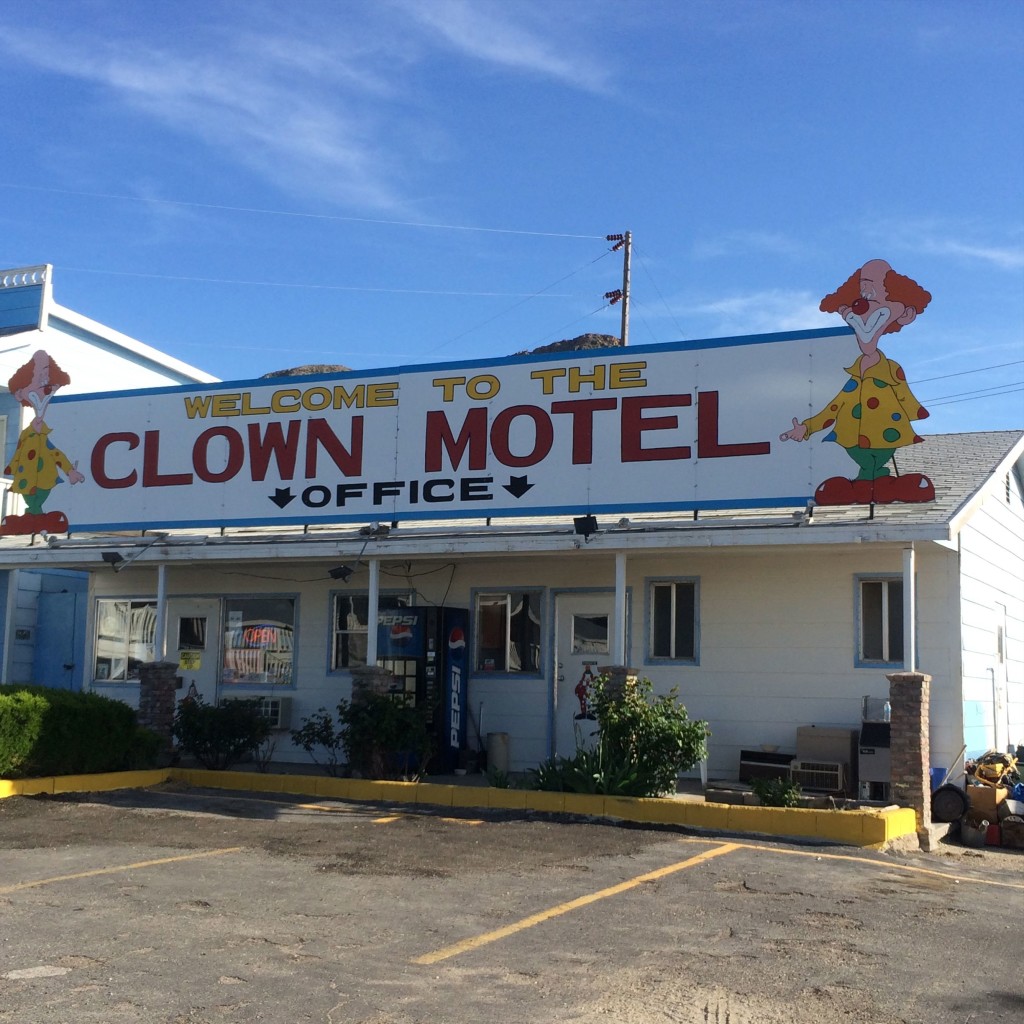 Tears of a Clown… (photo by Nikki Kreuzer) 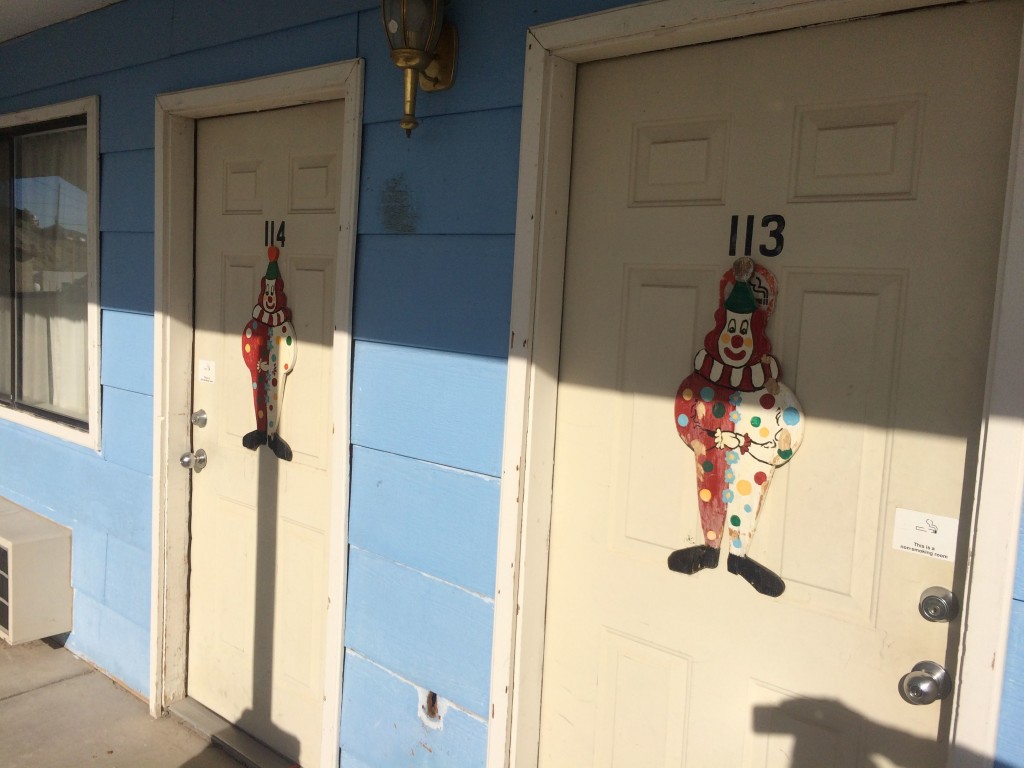 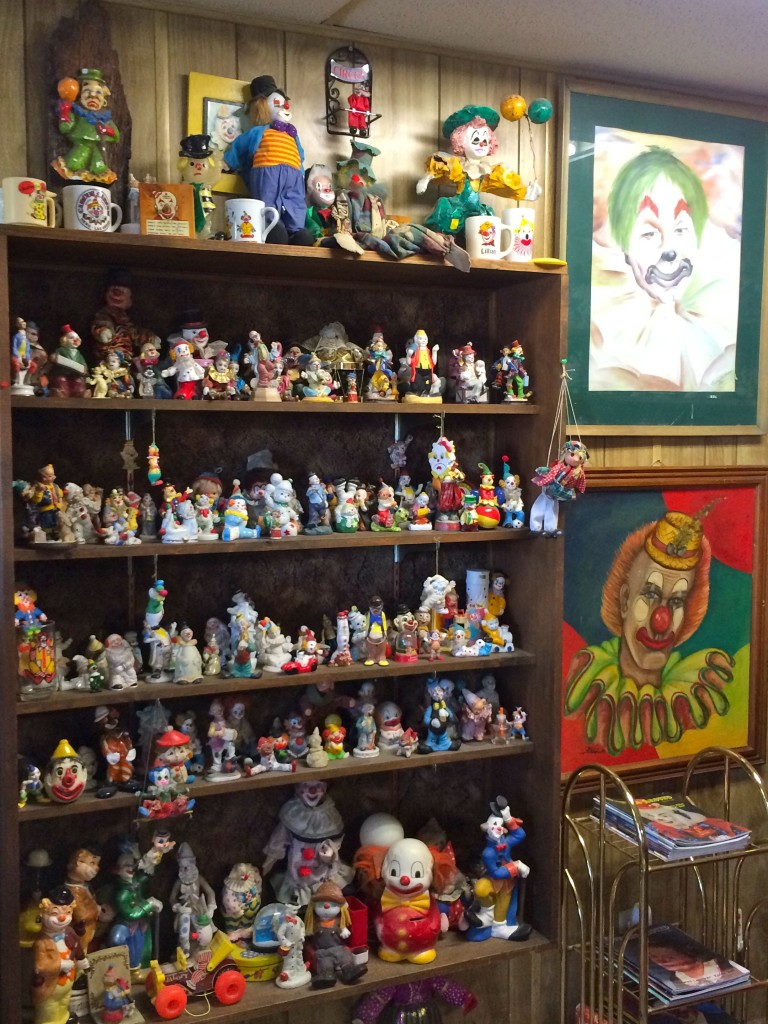 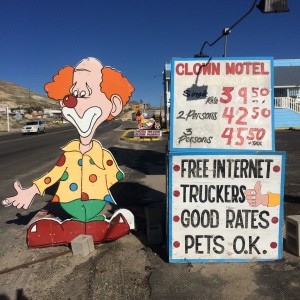 Nikki Kreuzer has been a Los Angeles resident for over 30 years. When not working her day job in the film & TV industry, she spends her time over many obsessions, mainly music, art and exploring & photographing the oddities of the city she adores. So far she has written 110 Offbeat L.A. articles, published at the Los Angeles Beat. As a journalist she contributes regularly to LA Weekly, Blurred Culture and The Los Angeles Beat and has also been published by Oddee.com, Twist Magazine, Strobe and Not For Hire. Nikki is also a mosaic artist, radio DJ and published photographer. Her photography has been featured in exhibit at the Museum of Neon Art, in print at the LA Weekly and is part of an upcoming show at the Neutra Museum in Los Angeles. She has recorded with the band Nikki & Candy as bassist, vocalist and songwriter, directing and appearing in the 'Sunshine Sunshine Santa Claus' music video for the band. She co-hosts the monthly radio show Bubblegum & Other Delights on Dublab.com. Her acting credits include a recent role in the ABC-TV show 'For The People', 'Incident at Guilt Ridge', 'Two and a Half Men', the film 'Minority Report' and 'Offbeat L.A.', a web series, written and hosted by Nikki Kreuzer. Her writing, radio and video portfolio can be found at OffbeatLA.com, her photography work @Lunabeat on Instagram and her music history posts @NikkiKreuzer on Twitter. Find Nikki & Candy music on iTunes, Amazon or at NikkiandCandy.com.
View all posts by Nikki Kreuzer →
This entry was posted in Attractions, Miscellanious, Offbeat LA and tagged Clown Motel, Desert, Nevada, Nikki Kreuzer, Offbeat LA. Bookmark the permalink.

One Response to Offbeat L.A. ROAD TRIP: The Clown Motel in Tonopah, Nevada