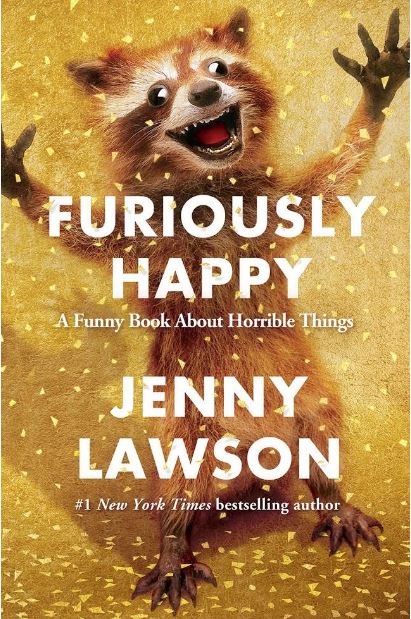 As a fan of Jenny Lawson’s New York Times bestselling memoir, “Let’s Pretend This Never Happened,” I was looking forward to “Furiously Happy” coming out in September 2015.

“Furiously Happy” is a collection of humorous essays with topics ranging from the struggles of wearing a koala costume in Australia to how being attacked by a lamentation of swans is not as glamorous as it sounds. All of her essays are linked together with the theme of surviving mental illness.

Known for her funny rants and dark humor, Jenny rises to the challenge of writing about mental illness while staying true to her irreverent style. This book is entertaining for anyone who is affected by mental illness. Even if you don’t have your own DSM diagnosis, you probably know someone who does.

You can appreciate Jenny’s sense of humor because you know she is speaking from the darkness of depression. At times it feels as if she displays her diagnosis collection like Girl Scout merit badges (Look! I earned Depression and OCD last week at my shrink’s office!) That can be hard to read when most of us don’t have enough money for bi-weekly shrink visits, only a doctor whose diagnosis is, “You meet the criteria for depression, so here are some pills.”  But this isn’t a book about psychiatric care in America; this is “A Funny Book About Horrible Things” and how to strive to be “Furiously Happy.” Jenny helps to break down the shame and stigma about living with mental illness and create conversations that are lighthearted.

If I was turning someone on to Jenny’s writing, I would definitely start with her first book.  For my friends who suffer from depression, I have already purchased several copies of “Furiously Happy” as gifts (and coping mechanisms) for them.

Jenny Lawson was a famous blogger before she wrote her first book and now that she has a huge fan base, she sells cute cups and T-Shirts and other things from her online store.  Jenny promises all purchases will show up on your credit card bill as “Eight pounds of uncut cocaine” which is kinda fun, like writing “For sexual favors” in the memo line of your monthly child support checks.

Quote:  “You never think to appreciate your arms until you need them to stop the floor from punching you in the face.”

Jenny’s helpful definition:  “There’s a difference between ‘drugs’ and ‘medication.’  You can tell the difference because the first ones are ironically much cheaper and easier to get than the latter, and also because use of medicine requires constant doctor supervision, treatment and blood work.  Kids don’t buy black-market Prozac to take to raves.”

I am President of The Fun Zone; The Center for the Study of Funism. I can not confirm or deny my involvement in certain random acts of guerrilla chalk art. I will admit to trying every day to anonymously do something nice for someone- anyone. When I write about food, it's because I can't help myself. I love food as much as the next guy, I only write about food I find myself obsessing on. When it comes to book reviews, I only write about books that I am inspired to read more than once, so my book reviews aren't about new releases that I liked, they are about tried and true books that I LOVE. I favor quirky stories, inspirational memoirs, and real life drama. There are many movies and books that I have enjoyed more than once. If you liked any of these, we probably have similar taste- Books: Peter Pan, Choke, A Life Without Consequences, Fight Club, The Adderall Diaries, Lets Pretend This Never Happened, The Glass Castle, Another Bullshit Night in Suck City, Wild, The Tribes of Palos Verdes, Just Kids, Movies: Little Miss Sunshine, Seven Psychopaths, Ghost World, Pulp Fiction, Hook, Big Fish, Reservoir Dogs, Moonrise Kingdom, Being John Malcovich,
View all posts by K.P. Rennie →
This entry was posted in Books and tagged Bookness, Books, essays, humor, Jenny Lawson, Memoir, Reading. Bookmark the permalink.