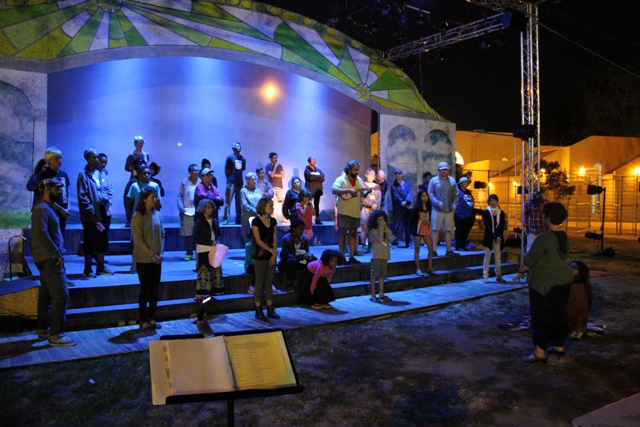 Cornerstone Theater Company is pleased to present the premiere of “Ghost Town,” a love story between a woman and her home, set in the colorful neighborhood of Venice, CA.

“Ghost Town” was created in collaboration with the community of Venice and Cornerstone Theater Company’s Institute Summer Residency, offering multidisciplinary professional training in community-based theater. Written by Juliette Carrillo and directed by Rebecca Novick, “Ghost Town” is full of music and revelry, serving up a story of home, community, and change that is both raucous and real. When Zelda is offered big bucks for her charming Bungalow, she will have to decide – should she stay or should she go? Visited by the ghosts of Venice past, present, and future, Zelda learns of the vibrant history of her community – the visions of Abbot Kinney, the dreams of migrant families, and the inspiration for generations of artists and creative minds. She also learns that not everyone is as they seem and the future may be dark for her beloved home.

“We hope that through the lens of the play, audience members will see their community reflected back in new and inspiring ways,” commented Megan Wanlass, Managing Director of Cornerstone Theater Company.

The Cornerstone Theater Institute Summer Residency is a training program in its 11th year.  Through this program, Cornerstone creates a play with a different California community by living within that community for approximately four weeks.  Previous Summer Residencies have taken place in Lost Hills (Kern Co.), Pacoima (Los Angeles County) and Eureka (Humboldt County), among other places.

For “Ghost Town,” 20 Cornerstone artists, as well as adult Institute students from across the U.S. and beyond, will be in residence at Oakwood Recreation Center, working to deepen relationships in the Venice community and produce the play. In preparation, Cornerstone company members spent the past year exploring Venice, attending community meetings and events, and connecting with local residents to learn and share stories. Oakwood Park Advisory, Venice Community Housing, Latino Resource Organization, H.E.L.P.E.R Foundation, Venice ArtBlock, and countless local individuals provided meaningful assistance for the development of “Ghost Town.”

Juliette Carrillo (Playwright) is a nationally recognized theatre director, writer, and award-winning filmmaker from Los Angeles, CA. She is a graduate of the Yale School of Drama. As a Cornerstone ensemble member, Juliette has directed community collaborations including Los Faustinos by Bernardo Solano, “As Vishnu Dreams” by Shishir Kurup, “Touch the Water” by Julie Hébert, “Lethe” by Octavio Solis, “It’s All Bueno” by Sigrid Gilmer and “Bliss Point” by Shishir Kurup.  She also wrote “Plumas Negras” for the 10th Cornerstone Institute with the East Salinas, CA community.  Outside of Cornerstone, some of her favorite collaborations have been directing the world premiere of “Lydia,” by Octavio Solis, the West Coast premiere of Pulitzer Prize winner, “Anna in the Tropics” by Nilo Cruz, the world premiere of References to “Salvador Dali Make Me Hot” by José Rivera, and the West Coast premiere of Sam Shepard’s “Eyes for Consuela.” She has directed for the Oregon Shakespeare Festival, Seattle Repertory Theater, South Coast Repertory, Magic Theatre, Arizona Theater Company, Yale Repertory Theater and the Mark Taper Forum. She has done numerous workshops in regional as well NYC theatres such as The Public, New York Theatre Workshop, INTAR and The Women’s Project. Juliette was an Artistic Associate at South Coast Repertory for seven years, where she directed and ran the Hispanic Playwright’s Project, collaborating with writers such as Nilo Cruz and Jose Rivera. She is a recipient of several awards, including the prestigious National Endowment of the Arts/Theatre Communications Group Directing Fellowship and the Princess Grace Award. She was also chosen by Sundance Theater Institute to participate in the Sundance/Luma Foundation Theater Directors’ Retreat in Arles, France.

Rebecca Novick (Director) is a theater director and producer based in the San Francisco Bay Area. Rebecca is interested in new voices and new structures and in ways of making work that introduce her to new communities.  She is passionate about exploring how theater can help repair the world.  Rebecca was most recently the Associate Artistic Director at California Shakespeare Theater where she developed and led the Triangle Lab, Cal Shakes’ community engagement wing.  She was also the Founding Artistic Director of Crowded Fire Theater Company, which she led for ten years.  She has directed and developed work for Cal Shakes, the Magic Theatre, Cornerstone Theater Company, Crowded Fire, Shotgun Players, Playground, Berkeley Rep’s Ground Floor, and the Bay Area Playwrights Festival among others.  Rebecca has also consulted for many foundations and arts non-profits, served as the interim program officer for the arts at the SF Foundation, and was a senior member of the staff at Theatre Bay Area.  She regularly speaks and writes on field issues, including her widely shared essay “Please Don’t Start a Theater Company.”

The cast of “Ghost Town” will feature Cornerstone Ensemble members Shishir Kurup, Page Leong and Bahni Turpin along with members from the community and Institute participants.

Performances will be held outdoors at the Oakwood Recreation Center in Venice on August 4, 5 and 6 at 8 p.m. Lawn seating is available and blankets or folding chairs are recommended. Tickets are pay-what-you-can with a suggested donation of $10.