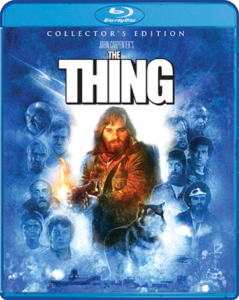 “The Thing” (1982, Shout Factory) In the frozen icescape of Antarctica, the staff of a remote research outpost discovers an alien craft and its inhabitant, which proves to be not only alive, but able to form perfectly identical replicas of other living things – perfect, that is, until threatened or provoked. As close a depiction of a paranoid nightmare as one can put on film, John Carpenter’s cult favorite draws less from the 1951 film by Howard Hawks than from John W. Campbell’s 1938 short story, “Who Goes There?” The result is a darker effort than the Hawks film, and as such, a favorite among horror fans who like their fare with an economy of dialogue, an abundance of grisliness and without a shred of light at its core. Rob Bottin’s special effects hold up their end of the equation, delivering non-CGI terrors that seem culled equally from the art of Hieronymous Bosch and creatures from the deepest parts of the ocean; the all-male cast, led by Kurt Russell and featuring such pros as Keith David, Donald Moffitt, David Clennon, Wilford Brimley, Richard Masur and Richard Dysart, bring life to their slight character sketches by writer Bill (son of Burt) Lancaster. A box office failure upon its release, but now considered a high-water mark for the genre during the 1980s, Shout Factory’s two-disc Collector’s Edition Blu-ray is the stuff of every “Thing” obsessive’s dreams, offering a new scan and audio mix with terrific extras from the 2002 Universal DVD – chief among them a loose and amusing commentary track by Carpenter and Russell, as well as a lengthy making-of featurette with most of the primary cast and the network TV version of the film – and a wealth of new material, including commentary tracks by co-producer Stuart Cohen and cinematographer Dean Cundey, an interview with Carpenter by Mick Garris, and conversations with much of the cast and members of the editorial, sound, special effects and storyboarding team (there’s even an interview with Alan Dean Foster, who wrote the novelization). Galleries of production art and footage, outtakes, trailers, stills and promotional art, and TV and radio spots round out this excellent set. 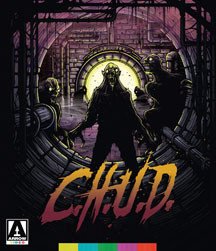 “C.H.U.D.” (1983, Arrow Video) A disparate trio of New Yorkers – photographer John Heard, cop Christopher Curry and soup kitchen weirdo Daniel Stern – investigate why members of the city’s homeless population who live in the sewer system are turning into monsters – Cannibalistic Humanoid Underground Dwellers, to be precise. A well-loved cult title among ’80s horror devotees thanks to a tongue-in-cheek attitude towards monster movie tropes not unlike Joe Dante’s “The Howling,” director Douglas Cheek’s “C.H.U.D.” is also a bit of a mess, with the Curry and Heard/Stern storylines seeming culled from different films (which is more or less the case, since Stern and Curry reportedly rewrote most of their scenes) and post-production edits by its distributor, New World, which trimmed out 20 minutes and emphasized the humorous elements. The seams are held together by the upscale cast, which includes Kim Griest (“Brazil”) and character actor greats Frankie Faizon, Sam McMurray and the late Jon Polito, and gooey special effects courtesy of John Caglione, Jr. and Ed French. And when the picture gets down to business and tries to generate some scares, it’s mostly successful – the monsters’ assault on Heard and Griest’s apartment is a standout – and if you can ride out the tonal shifts, “C.H.U.D.” is unpretentious and enjoyable junkfood fun. Arrow’s two-disc Blu-ray offers both the theatrical edit (in HD) and an integral version (2k transfer) that incorporates footage missing from the New World version, including a left-field epilogue of sorts featuring John Goodman and Jay Thomas as ill-fated cops. Two commentaries – one loose and funny track with Heard, Stern, Curry, Cheek and writer Shephard Abbott, and a second with composers Martin Cooper and David A. Hughes – are included, as are featurettes on the production design and effects, a visit to the New York City locations with former “Fangoria” managing editor Michael Gingold and the original trailer. 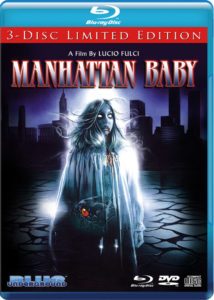 “Manhattan Baby” (1982, Blue Underground) When a lost Egyptian tomb is opened, the family of the archaeologist (Christopher Connelly) that discovered the site, and eventually, everyone that comes in contact with them is plagued by strange phenomena – cobras and scorpions materialize and kill in New York apartments, the archaeologist is struck blind, and his children discover that a mysterious amulet can allow them and their hapless babysitter (Cinzia de Ponti) to take “voyages” through time and space. Fans of director Lucio Fulcl’s more bleak and blood-soaked efforts (“Zombie,” “City of the Living Dead”) may find this horror-fantasy confusingly plotted and weighed down by spotty visual effects (a nod to “Poltergeist” and other mainstream horror fare, which by this time had overtaken filmmakers like Fulci in both popularity and technical ability); Troy Howarth’s excellent liner notes lay the blame largely with budgetary cuts which reined in much of married screenwriters (and regular Fulci collaborators) Dardano Sacchetti and Elisa Livia Briganti’s work, and note that there are still a few agreeable moments in the picture, most notably Fabio Frizzi’s mournful electronic score and a finale that recalls Fulci’s wonderfully bizarre “The Beyond.” Completists will best appreciate the effort, as well as Blue Underground’s terrific three-disc set, which includes both Blu-ray and DVD presentations and a CD of Frizzi’s music; supplements include a lengthy interview with Frizzi, who discusses his work with Fulci and even performs a suite of music from “Manhattan Baby,” as well as chats with Sacchetti, makeup artist Maurizio Trani (another longtime Fulci teammate) and co-star Cosimo Cinieri, who enjoys the film’s nastiest demise; typically expert observations by Stephen Thrower and a brace of promotional material (trailers and art) are also included.

“Creepshow 2” (1987, Arrow Video) Three more jolting tales of terror in the vicious vein of E.C. Comics: “Ol’ Chief Woodenhead,” about a cigar store Indian stature which pays back years of care by store owners George Kennedy and Dorothy Lamour by avenging their deaths; “The Raft,” which pits a quartet of college students trapped on a remote lake against an amorphous and very hungry aquatic creature; and “The Hitchhiker,” with Lois Chiles discovering that the hitcher she left for dead on the road remains is still determined to catch a ride with her. George Romero adapted three stories by Stephen King (through five were planned) for this sequel to their well-loved 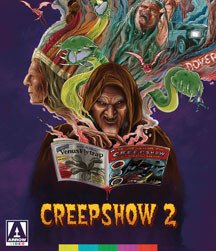 1982 horror anthology, directed by Romero’s frequent cinematographer/composer Michael Gornick; again, it’s budgetary restraints that the film from echoing much of what made its predecessor such nasty fun (a great cast, wicked script and exceptional special effects by Tom Savini), but special effects creators Howard Berger and Ed French provide a few gruesome moments, most notably Tom Wright’s accelerated decomposition as the Hitchhiker. Holt McCallany, Paige (sister of Daryl) Hannah and Don Harvey all shoulder layers of gore as victims, while King turns up briefly as a truck driver and Tom Savini briefly handles hosting duties as the Crypt Keeper-esque Creep (though his role is largely seen in animated form, and voiced by the great Joe Silver). Arrow’s Blu-ray provides its usual trove of supplemental material, from commentary by Gornick and interviews with Romero, Savini, Berger and Greg Nicotero, and several cast members; clips of Savini donning the elaborate Creep makeup and a gallery of promotional material help to give the disc some heft.

Paul Gaita lives in Sherman Oaks, California with his lovely wife and daughter. He has written for The Los Angeles Times, LA Weekly, Variety and The Fix, among many other publications, and was a home video reviewer for Amazon.com from 1998 to 2014. He has interviewed countless entertainment figures from both the A and Z lists, but his favorites remain Elmore Leonard, Ray Bradbury and George Newall, who created both Schoolhouse Rock and the Hai Karate aftershave commercials. He once shared a Thanksgiving dinner with celebrity astrologer Joyce Jillson, and regrettably, still owes the late character actor Charles Napier a dollar.
View all posts by Paul Gaita →
This entry was posted in Movies and tagged Arrow Video, Blue Underground, George Romero, John Carpenter, Lucio Fulci, shout factory. Bookmark the permalink.

One Response to Movies Till Dawn: ‘Tis the Season – ’80s Creature Features for Christmas Edition