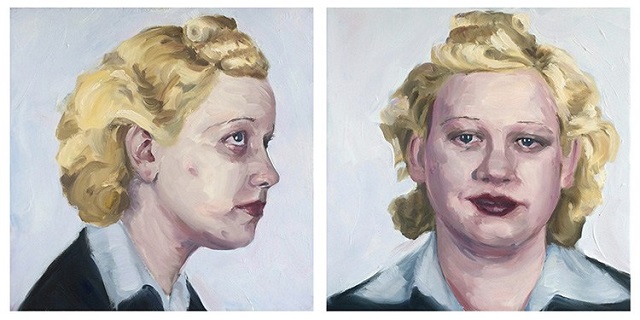 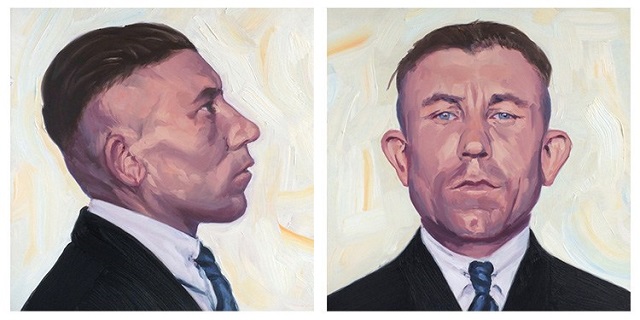 From April 7th through the 30th, La Luz de Jesus Gallery presents “Muzzlers (The Accused)” by Avengers frontwoman and solo artist, Penelope Houston. The exhibit is a series of diptych oil paintings of mugshots from the 1920s and ’30s that Houston, who attended the San Francisco Art Institute, discovered in archived police records while working at the public library. “Muzzler” was slang for a sex worker, and this was a period when charges such as “crimes against nature” could be leveled at gay men. The original mugshots were black and white, but Houston brought them to vivid life, using the notes in each file on hair and eye color, weight and age.

Alongside “Muzzlers,” the gallery will also be showing “Vow of Silence (In Convents)” by Miso/Karen Hsiao. The opening reception is April 7th, 8-11 PM, with an artist talk with Penelope Houston on April 14th, 7-9PM. I was lucky enough to speak with Houston via email, regarding the exhibit and her life as both visual artist and musician. She made an interesting point in that, “Nowadays people know exactly what they look like in photos,” unlike these unfortunate subjects, snapped unwillingly, long before everyone constantly had a camera in their hand. You can read more about Houston’s art at penelopehouston.com and her music at penelope.net.

Your website calls this your first professional gallery show. Why has it taken this long to have one? Or were you not pursuing it?
My visual arts took back seat to music in 1977 when I formed the Avengers. I went back to university eight years ago and found the fastest way to a BA was Studio Art, as I had piled up those classes at the San Francisco Art Institute back in the day. Since graduating in 2013, I’ve been painting as well as performing but waited until I had a series of works I thought would stand out in today’s art world before looking for a show.

Do you think you would have been as interested in these mugshots if they were recently taken or is the history and the outdated charges part of what drew you to them?
There’s a kind of photographic innocence in the subjects from 1919. A more revealing interaction. Nowadays people know exactly what they look like in photos and current mugshots are less multidimensional.

Is there a difference in the feelings you get from making art and the feelings you get from writing/performing music? Could you ever live with just one as an outlet and not both?
Performing, for me, can be a cathartic emotional outlet whereas painting and songwriting are generally more introspective. But there’s a similarity to showing paintings and playing a new song. I get to experience the work through someone else’s eyes/ears. It’s fascinating to hear people’s reactions. It broadens the meaning for me. Everyone will have their own take on what a song means or what a portrait subject really feels. They own that response and it adds to the cultural definition of the work.

On a related note: If you hadn’t joined the Avengers, do you think your focus might have stayed on art instead of music? Or were you already focused on both?
I grew up thinking I would be a visual artist. Punk just swept me away and later melody and words became my medium, but I felt I would always return to art.

Is oil painting your favorite medium? What is it about it that interests you, as opposed to, say, the collages from your school days?
I love the fluid quality of oil but I’m still experimenting with mediums. Currently I’m working on an installation for the SFAI Annual Gala that includes painting on top of collage.

Do you still work for the San Francisco Public Library? What do you enjoy about working there?
I work at SFPL in the San Francisco History Center and Special Collections. We have oceans of fantastic material – photographs, rare books and archival materials that dig deeply into our past. Without this job I most likely would never have seen the mugshots that inspired a year’s worth of painting.

Simone Snaith writes young adult and fantasy novels, and sings in the band Turning Violet. A fan of scifi, fantasy, the supernatural and most things from the '80s, she enjoys reviewing music, books and movies. You can read about her own books at simonesnaith.com.
View all posts by Simone Snaith →
This entry was posted in Art, Miscellanious, Music, Upcoming Events and tagged 1920s, folk, La Luz De Jesus, mugshots, oil paintings, penelope houston, punk, the avengers. Bookmark the permalink.