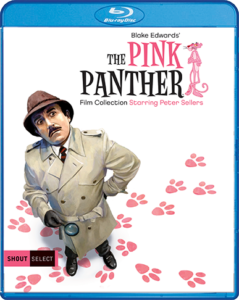 “The Pink Panther Collection Starring Peter Sellers” (1963-1982) Six-film, six-disc Blu-ray set compiles all of Peter Sellers’ appearances in what is arguably his best-remembered role: the disaster-prone French detective Jacques Clouseau. When I was a kid, Sellers as Clouseau seemed to be a constant presence, both on television (the ’60s titles -“The Pink Panther” and “A Shot in Dark” – were in regular rotation as Movies at 8 or holiday broadcasts) and in theaters (Sellers and director Blake Edwards released three “Panther” films  – “Return of the Pink Panther,” “Pink Panther Strikes Again” and “Revenge of the Pink Panther” –  at a breakneck pace between 1975 and 1979). For me at that time, there was little funnier than Sellers as Clouseau, who appeared to celebrate the joys of unfettered foolishness while also confirming what we suspected about adulthood (absurd and frantic). Reviewing the six films today, they’re a mixed bag – “Panther,” in which Clouseau is a supporting character, and “Shot” are frothy cocktail-hour confections, while “Returns” and “Strikes Again” are Sellers/Clouseau at full-bore strength (“Revenge” is only fitfully amusing, and the less said about “Trail of the Pink Panther,” made after Sellers’ death using outtakes from previous titles, the better). But as I was pleased to discover again, even in the lesser “Panther” films, Sellers remains unimpeachable, both in terms of physical humor and the humanity he brings to a role that could have been a one-note wrecking machine. Jerry Beck’s excellent liner notes quote Sellers’ description of Clouseau as a “complete idiot” who would “never want anyone else to know that,” and the collision of self-importance, trepidation and utter inability to step out of the path of an oncoming disaster that personified Clouseau is what made him not only enormously funny but also lovable for both adults and kids like me, who knew from embarrassment, clumsiness and a desperate desire to be taken seriously. We wanted to see him fail, but also couldn’t wait for him to succeed, often in spite of himself. It certainly gave us hope. Shout! Factory’s set – part of its Shout Select line – includes high-def transfers on all films and a wealth of new and previously released extras, including commentary by Edwards on “Pink Panther” and new tracks by historians Jason Simos and Willliam Patrick Maynard, interviews with Robert Wagner and Claudia Cardinale on “Pink Panther,” producer Walter Mirisch on “Shot in the Dark,” Catherine Schell on “Return,” and Lesley Anne-Down on “Strikes Again,” among many others. 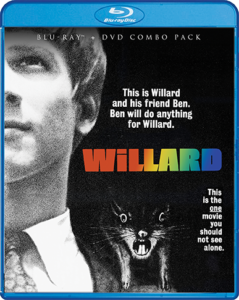 “Willard” (1971) Mistreated or stifled by nearly every person in his life – his dotty mother (Elsa Lanchester) and her decrepit friends, his brute of a boss (Ernest Borgnine) – Willard (Bruce Davison) finds not only companionship from the horde of rats that cohabit his mother’s crumbling house, but also a relentless (and carnivorous) means to an end for him to gain respect, or at the very least, revenge. Morbid mix of psycho-thriller and nature-gone-amuck chills, produced by Bing Crosby and Mort Briskin, was a huge box office hit, thanks largely to Davison’s performance, which manages to derive sympathy, even when he’s ordering his rat horde to kill. The latter element was the other key selling point, and director Daniel Mann convincingly creates what looks like a tidal wave of rats invading a party and later, facing off against Borgnine in the film’s memorable climax (“Tear ’em up!”) through close-ups, edits and a very small unit of dedicated animal actors. Our own deep-rooted revulsion and fascination for rats does most of the heavy lifting. The success of “Willard” has been credited for the ’70s boom in animal-attack thrillers that includes everything from “Frogs” to “Jaws,” though most didn’t bother with the depth of performance or character in TV vet Gilbert Ralston’s script (adapted from Stephen Gilbert’s novel, “Ratman’s Notebooks”). Oddly, many of those have remained easy-to-find home video titles while “Willard” has been mostly MIA until Shout Factory’s Blu-ray/DVD set, which includes a free-wheeling interview with and commentary by Davison, as well as trailers, TV and radio spots and promo art. Shout! also offers a combo pack for the sequel, 1972’s “Ben,” which introduces Willard’s chief rat to a new outsider (Lee Harcourt Montgomery). It’s notable mostly for direction by Phil Karlson and the Oscar-nominated title song by Michael Jackson – did you know it was about a rat? 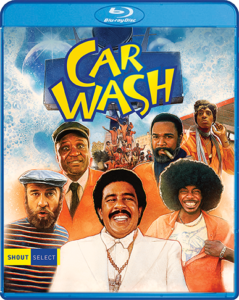 “Car Wash” (1976) Breezy trifle about the crew and customers at the Dee-Luxe Car Wash (located at 6th and Rampart) where, as the chart-topping title song by Rose Royce informs us, “the boss don’t mind if sometimes you act a fool.” The latter dominates most of the goings-on in a single day, with T.C. (Franklin Ajaye) attempting to win concert tickets to woo his ex-girlfriend, Abdullah (Bill Duke) pursuing a mad bomber (Professor Irwin Corey) and Floyd and Lloyd (Darrow Igus and DeWayne Jessie, the once and future Otis Day) practicing their stage act for an audition. In between these hijinks, the wash is visited by the well-heeled minister Daddy Rich (Richard Pryor) and a blinkered cabbie (George Carlin), and the running time unfolds with an array of schemes, pranks and romantic liasions before the close of business. Director Michael Schultz (“Cooley High”) and writer Joel Schumacher juggle multiple stories and nearly two dozen players – among them Garrett Morris, Antonio Fargas, pioneering black filmmakers Clarence Muse and Ivan Dixon (“Hogan’s Heroes”), Melanie Mayron, the Pointer Sisters and Raiders defensive end Otis Sistrunk – and for the most part, keep them amusing while also injecting a note of social commentary, most notably in the closing confrontation between Abdullah and Dixon’s Lonnie, who realize that their well-maintained pride and hustle haven’t served them well. Mostly, the pic works best when it maintains the rhythm of the Grammy-winning soundtrack (penned by Motown great Norman Whitfield), bopping from player to player like an easy glide down the FM dial. The Blu-ray include sporadic if informative commentary by Michael Schultz, an interview with producer Gary Stromberg and an interview with Jessie, as well as radio spots and a trailer.

Paul Gaita lives in Sherman Oaks, California with his lovely wife and daughter. He has written for The Los Angeles Times, LA Weekly, Variety and The Fix, among many other publications, and was a home video reviewer for Amazon.com from 1998 to 2014. He has interviewed countless entertainment figures from both the A and Z lists, but his favorites remain Elmore Leonard, Ray Bradbury and George Newall, who created both Schoolhouse Rock and the Hai Karate aftershave commercials. He once shared a Thanksgiving dinner with celebrity astrologer Joyce Jillson, and regrettably, still owes the late character actor Charles Napier a dollar.
View all posts by Paul Gaita →
This entry was posted in Movies and tagged shout factory. Bookmark the permalink.