Bland On The Run – Eric Clapton at The Fabulous Forum 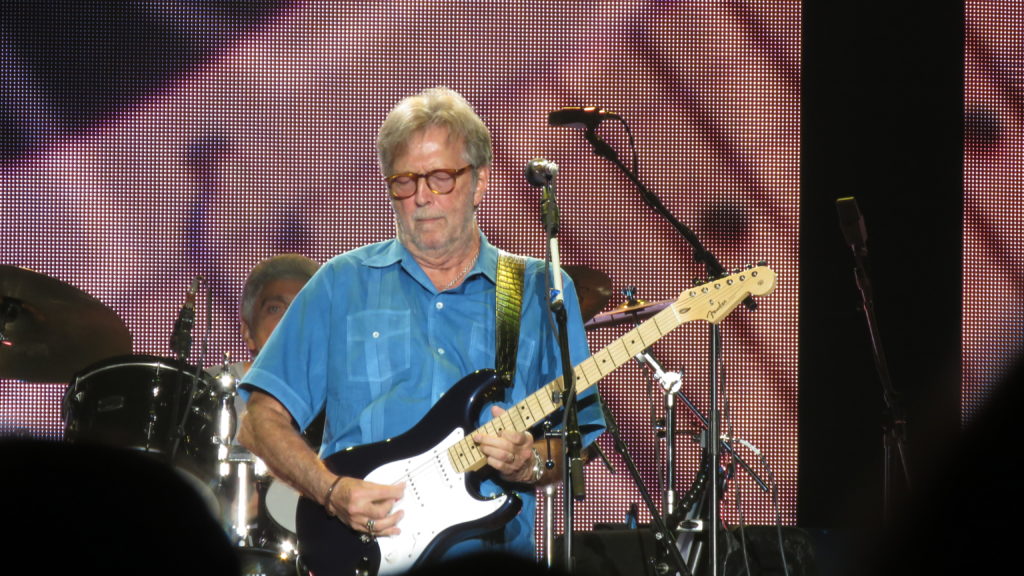 Last night was the second of a four-night run by guitar god Eric Clapton in Los Angeles, probably to be the final time any of us see him live. Prior to setting up shop here in L.A., Clapton played recently in New York, to some very tepid and almost cruel reviews. Hopefully I can bring some clarity to what you would see if you decided to go tonight or Monday. The national sport these days seems to be criticizing aging rockers and complaining that they just can’t cut it, the sets are too short, the setlist is suffering, etc.

Last night Clapton didn’t seem to have lost any of his skills when it comes to playing his guitar, or singing and belting it out. I’ve been seeing this man perform live for longer and more times than I can remember, and as has always been the case, some nights you get a good Clapton show, and some nights you don’t. In the 1990s, I saw him two nights in a row, and the second night was awful. Last night’s performance was mediocre at best, but not because Clapton can’t play or sing. First off, the mixing was horrible. I kept reaching for an imaginary volume knob so I could just crank it. To put it in perspective, I was dead center row 15. So that means I ponied up for some very expensive seats. No freebies. And when I’m putting up more than one large for a night out, I expect loud, crunchy rock and blistering blues riffs. Again, the sound of the show was so dead and flat, I might as well have been listening to a Youtube clip.

As for Clapton himself, I can’t criticize his skills as I said. He could play the world’s most incredible solo if he chose to do so. That’s plain to see. But he didn’t. Last night was Clapton by the numbers. I Shot The Sheriff, Layla, Lay Down Sally, etc. You get the picture. I prefer a show where there’s more blues and less known songs. Ginhouse Blues with Andy Fairweather Lowe anyone? I’ll take a shot. So the show is predictable. And if you’re a casual fan, you’ll love the show. But there’s more. There’s a disconnect not only between Clapton and the audience, there seems to be a disconnect between Clapton and his music. He seems disinterested, like all his energy is gone. Still, it’s ok, he’s earned the right to do whatever he wants. He’s endured more than most, and has given more than most back.

Ivor Levene likes to interview musicians, write about music and musicians, play music, listen to music, read about music, photograph musicians, and anything else you can think of with music. He has been involved with the music scene for over thirty years and his posts have appeared all over the place! Ivor says "I'm going to write about music as long as I have something to say".
View all posts by Ivor Levene →
This entry was posted in Events, Music and tagged #clapton, #fabulousforum. Bookmark the permalink.