Offbeat L.A.: The Madonna Inn – Happiness in San Luis Obispo is a Palace of Kitsch 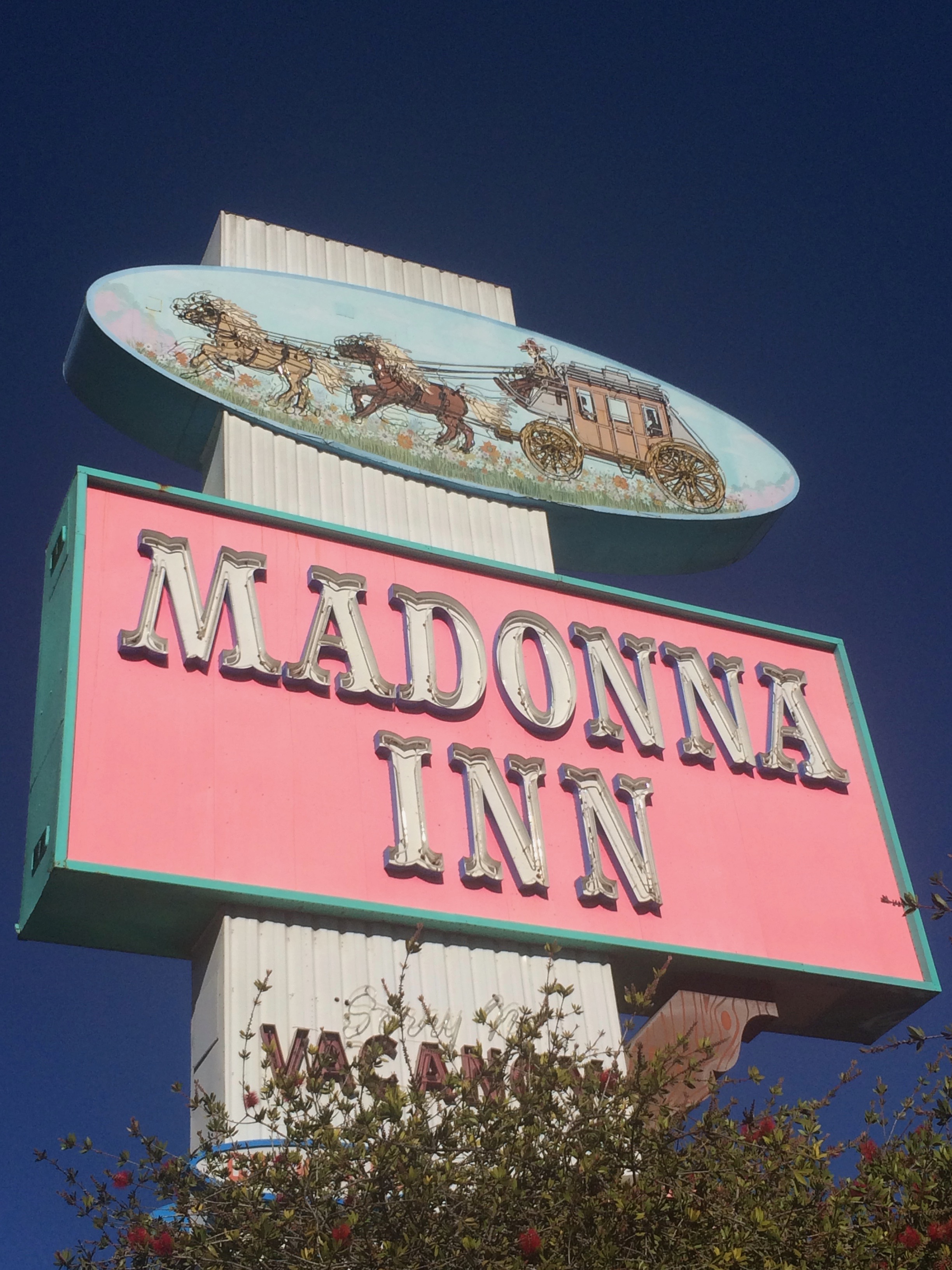 There have been weavers of magic spells since the dawn of man’s existence; those who spin gold from mere thread, create wonderlands and sprout bouquets of sweet smelling flowers from their imaginations. Some of these magicians may not even consider themselves artists, but their idiosyncratic creations speak otherwise. Visiting the magical pink palace of the Madonna Inn, located about 4 hours north of Los Angeles in San Luis Obispo, will allow you to behold Alex and Phyllis Madonna, the owners and designers of this 110-room, larger-than-life, quite surreal hotel, as the peculiar visionaries they truly are. It is a shrine to individual expression, creativity and a stubborn stand against cookie-cutter homogeny. Appearing as if Liberace and Zsa Zsa Gabor had furnished a love nest and tried to outdo each other with opulent decorating schemes, it is full sensory overload in the best kind of way. 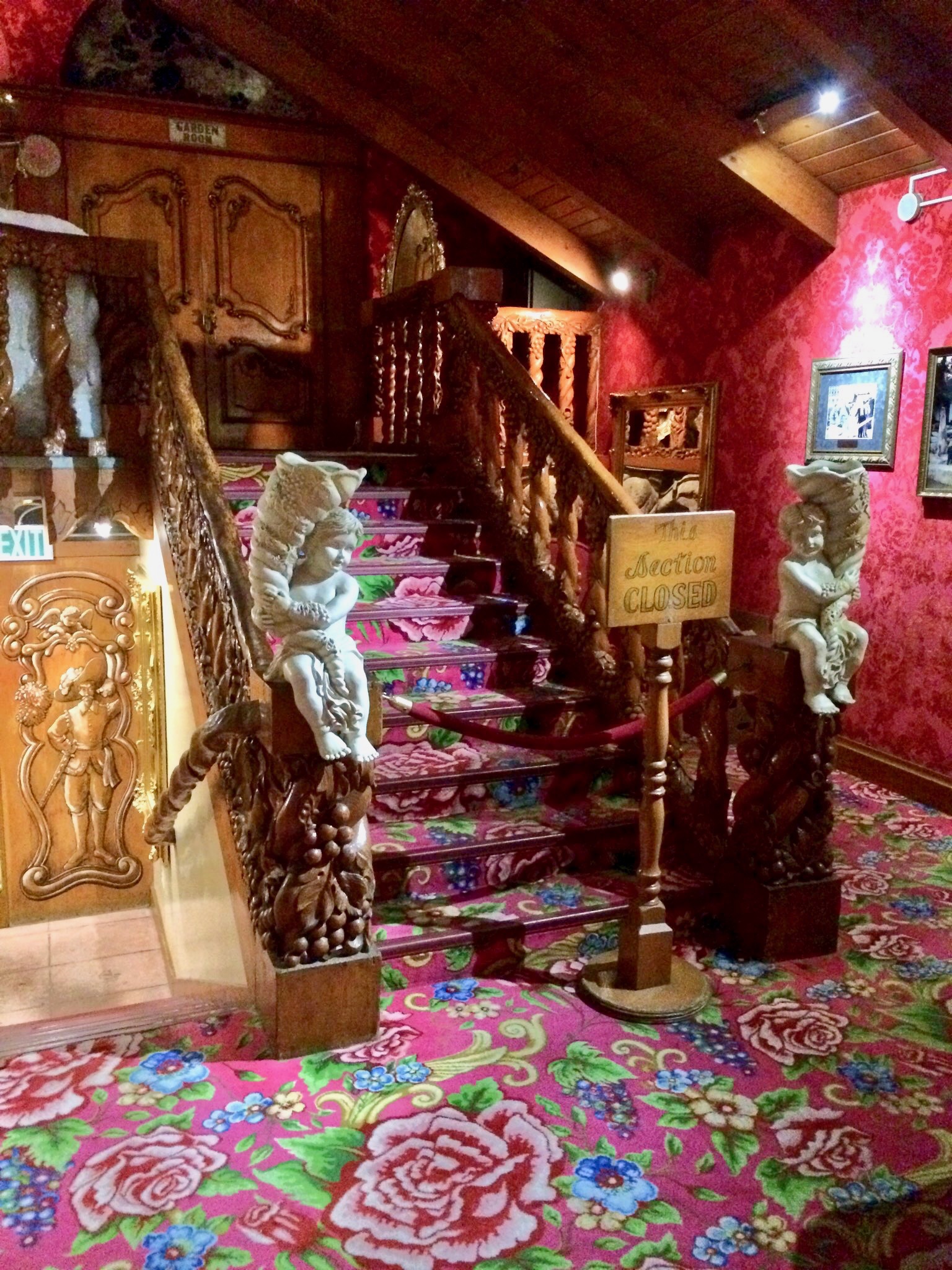 It’s known as a temple of kitsch, a slice from a fairytale story book, gawdy, loud and over-the-top. But according to his widow Phyllis, the pure and simple reason Alex Madonna, who passed away in 2004, decided to give each hotel room a separate theme when he opened the Madonna Inn in 1958 was to “make more people happy.” In a 1982 interview by the NY Times, Mr. Madonna elaborated on his goal, “Anybody can build one room and a thousand like it… I want people to come in with a smile and leave with a smile. It’s fun.” The result is overwhelming splendor and gilded grandeur bordering on the fantastical – a men’s urinal built from a working rock waterfall, wooden staircase banisters finely carved to resemble grape vines, glowing multi-colored stained glass windows and chandeliers, tufted booths in the dining room of fuchsia and gold leather, soft-to-the-touch velvet flocked wallpaper, and so much attention to detail crammed into the ceiling, floors and walls that the mind shuts down and the only choice is to just be and go with the flow. 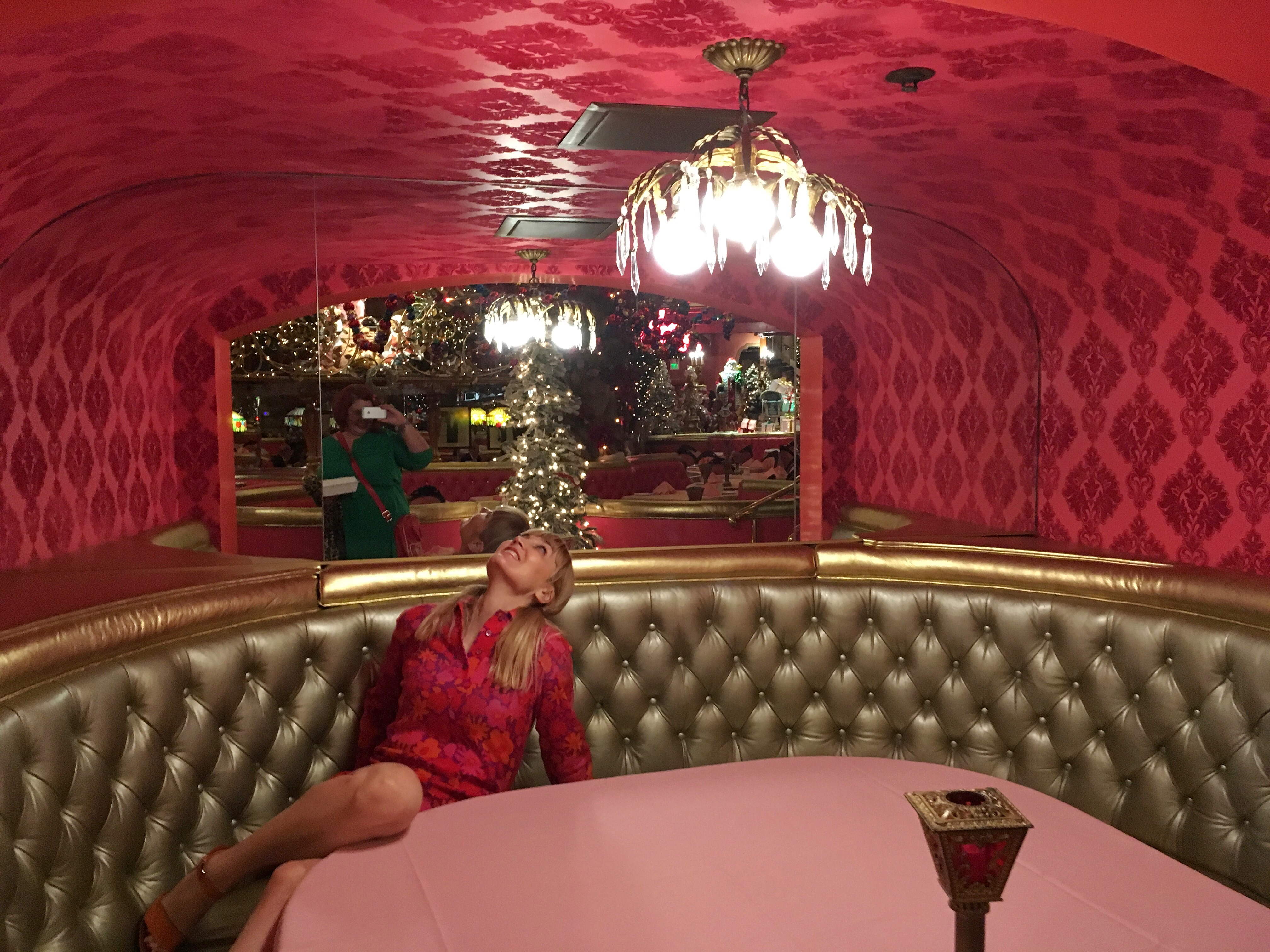 The author taking it all in (photo Gina Middleton)

Originally containing only 12 rooms, it has grown in the past sixty years to include 110, each with its own unique theme and statement, each casting an incantation of magic and individuality, each painstakingly decorated by Phyllis Madonna herself. Several rooms, such as the Cave Man and Jungle Rock, feature cave-like walls and waterfall shower stalls carved from 200-ton rock boulders, carefully rolled down from the mountain towering above. There are branches of trees sprouting plastic leaves, growing purposefully beside the beds to create the impression of an outdoor pre-historic shangri-la. The entrance to the honeymoon cottage, Love Nest, is accessed by a Hansel & Gretel styled bridge and is adorned with Pepto Bismol pink shag carpets and a private stained glass viewing nook found by climbing a spiral staircase with brass rails. Gypsy Rock has wood beamed multi-colored ceilings symbolic of a twirling gypsy’s scarves, while Room 132, the western-themed Yahoo, contains a stagecoach bed, complete with life-sized wooden wagon wheels and a seat for the driver. 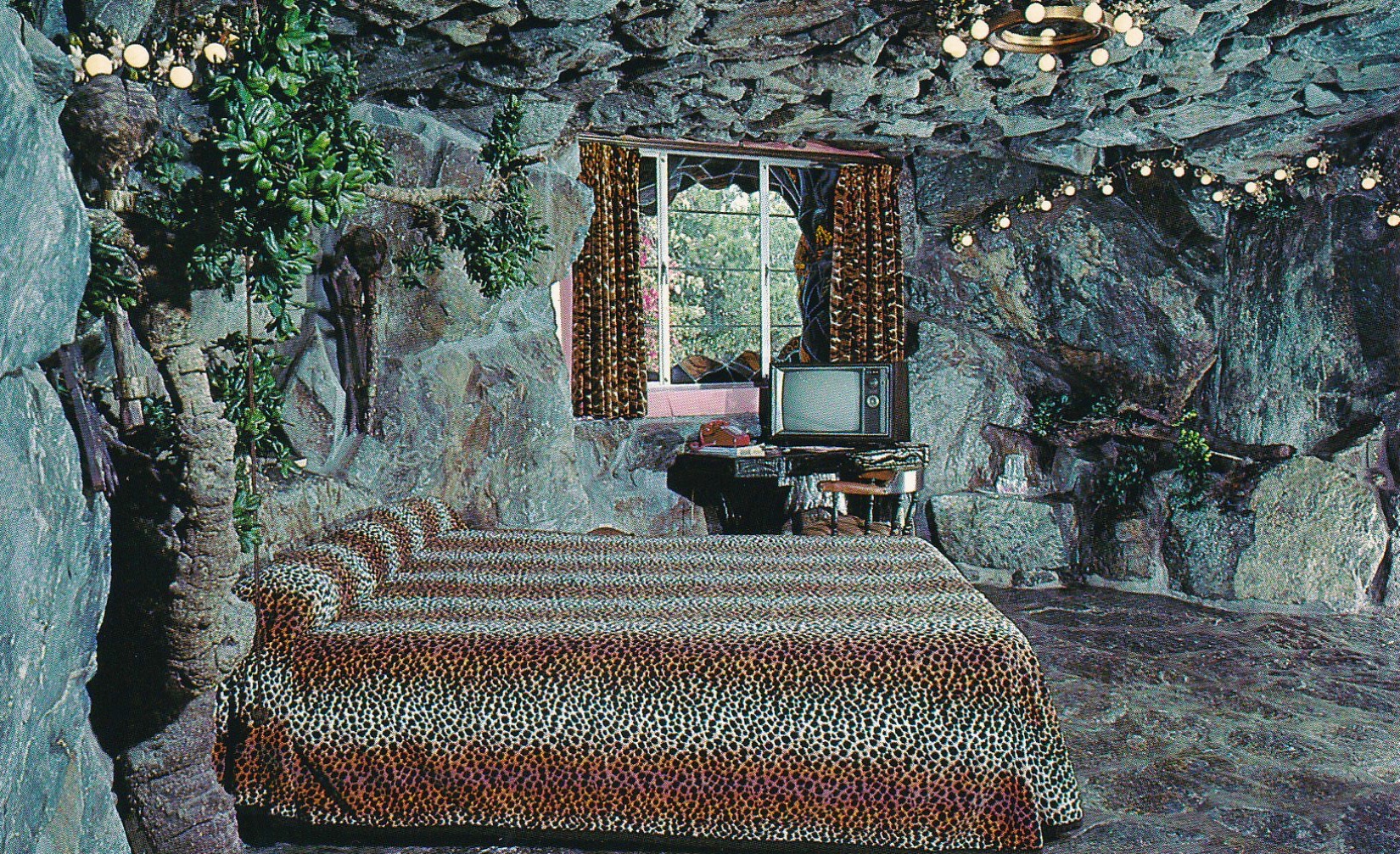 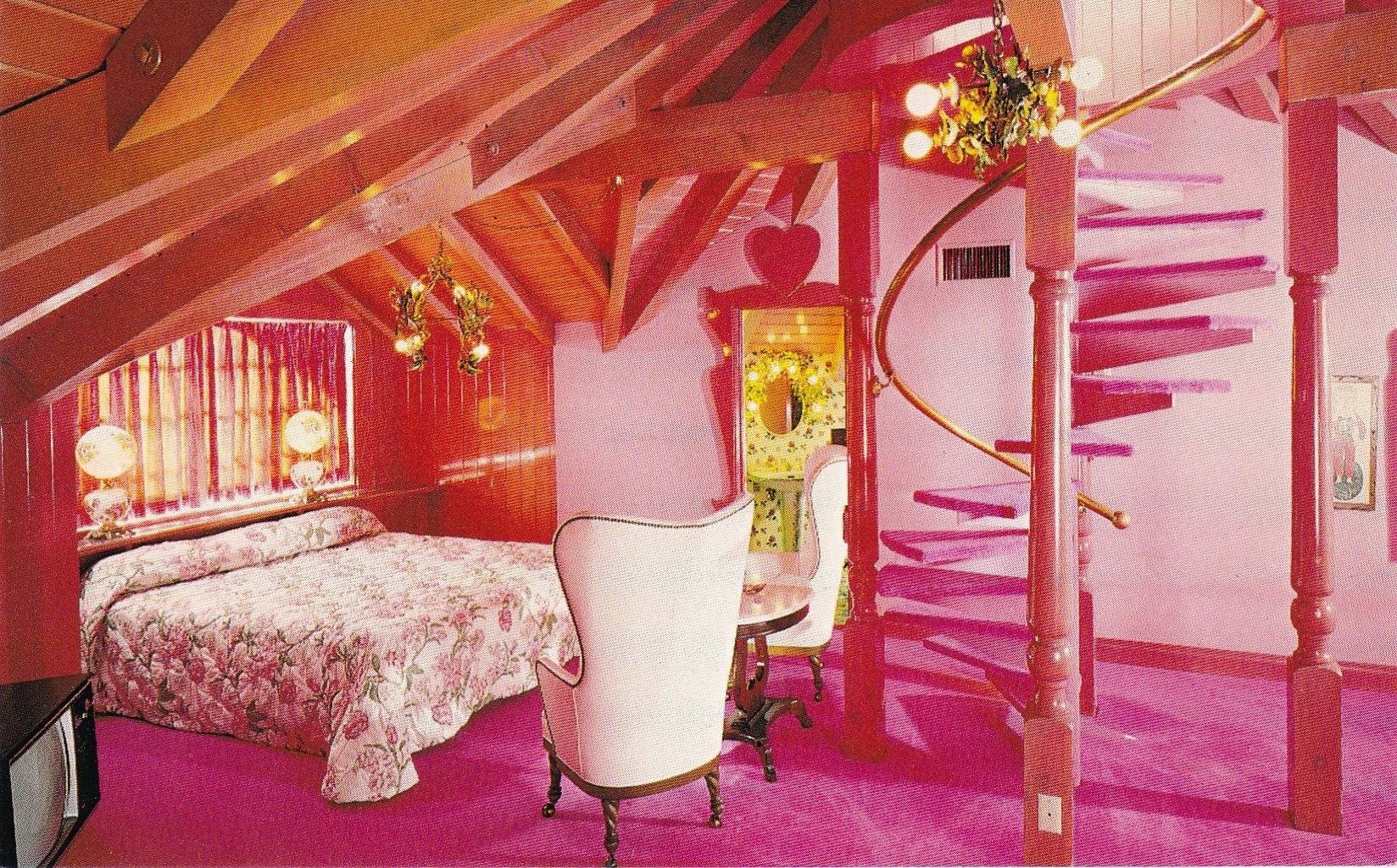 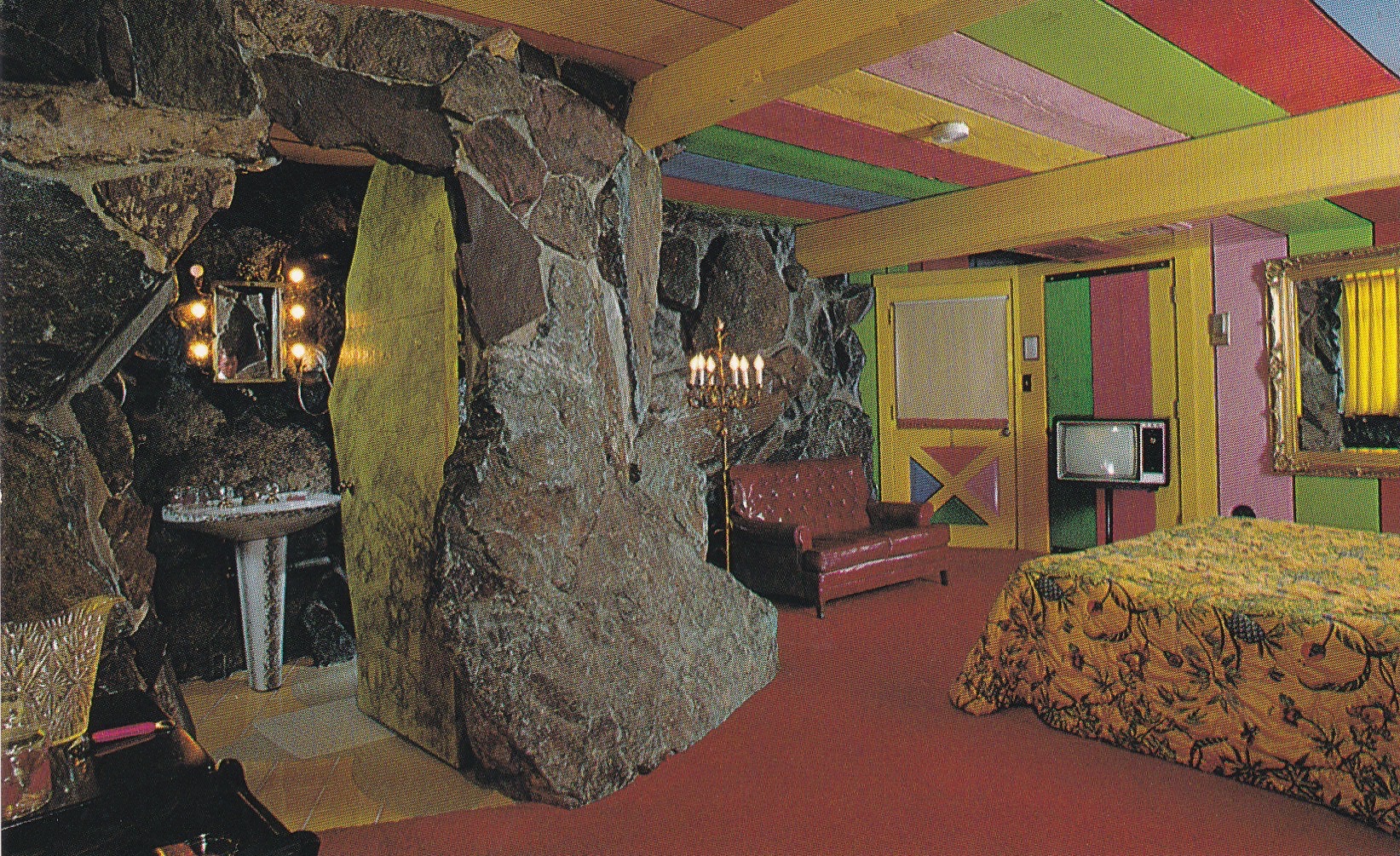 Alex Madonna was pure and simply a product of the wild, and still young, California west, a golden boy in a golden state, full of a life drive matching his vibrant imagination. Born in San Luis Obispo in 1918, he was the third child and first American generation born to hard working immigrants from Switzerland. He did odd jobs, joined the US army, and worked to construct both the 101 and 5 freeways before finding and marrying his artistic soulmate, Phyllis, in 1949. The Madonnas followed their hearts, openly and freely in their building and decorating ideas. They broke rules and basically created what felt right to their own distinctive visions. Phyllis states in her 2002 book, Madonna Inn: My Point of View, that they chose the color pink as a guiding inspiration because it “flattered people and made them feel relaxed and happy when they were around it. We feel pink spotlights people and highlights their positive attributes.” The Madonnas took quality of life quite seriously and realized that spreading joy would not only bring more hotel visitors, but also had the reciprocal effect of karmically drawing more happiness back home to them. 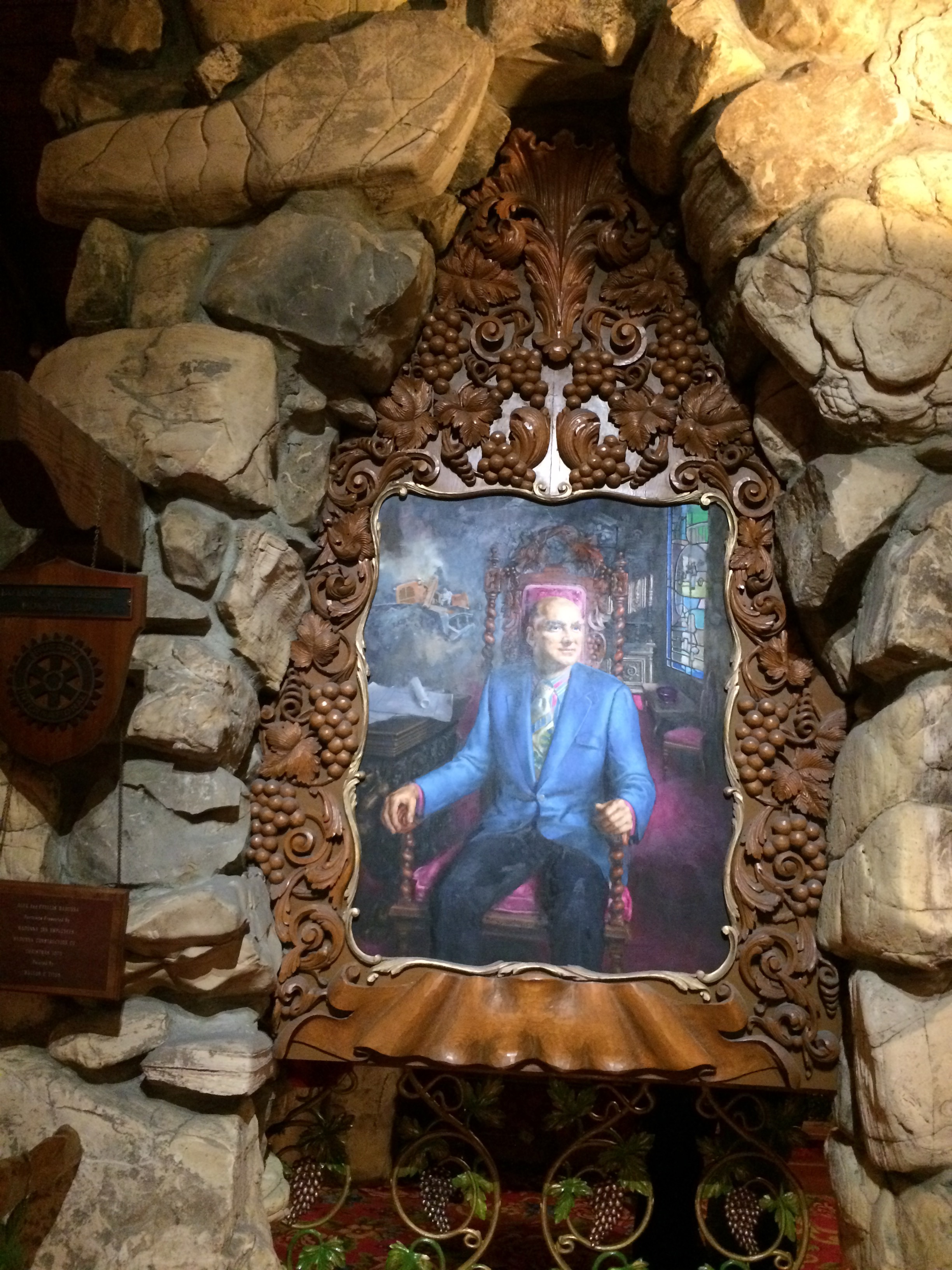 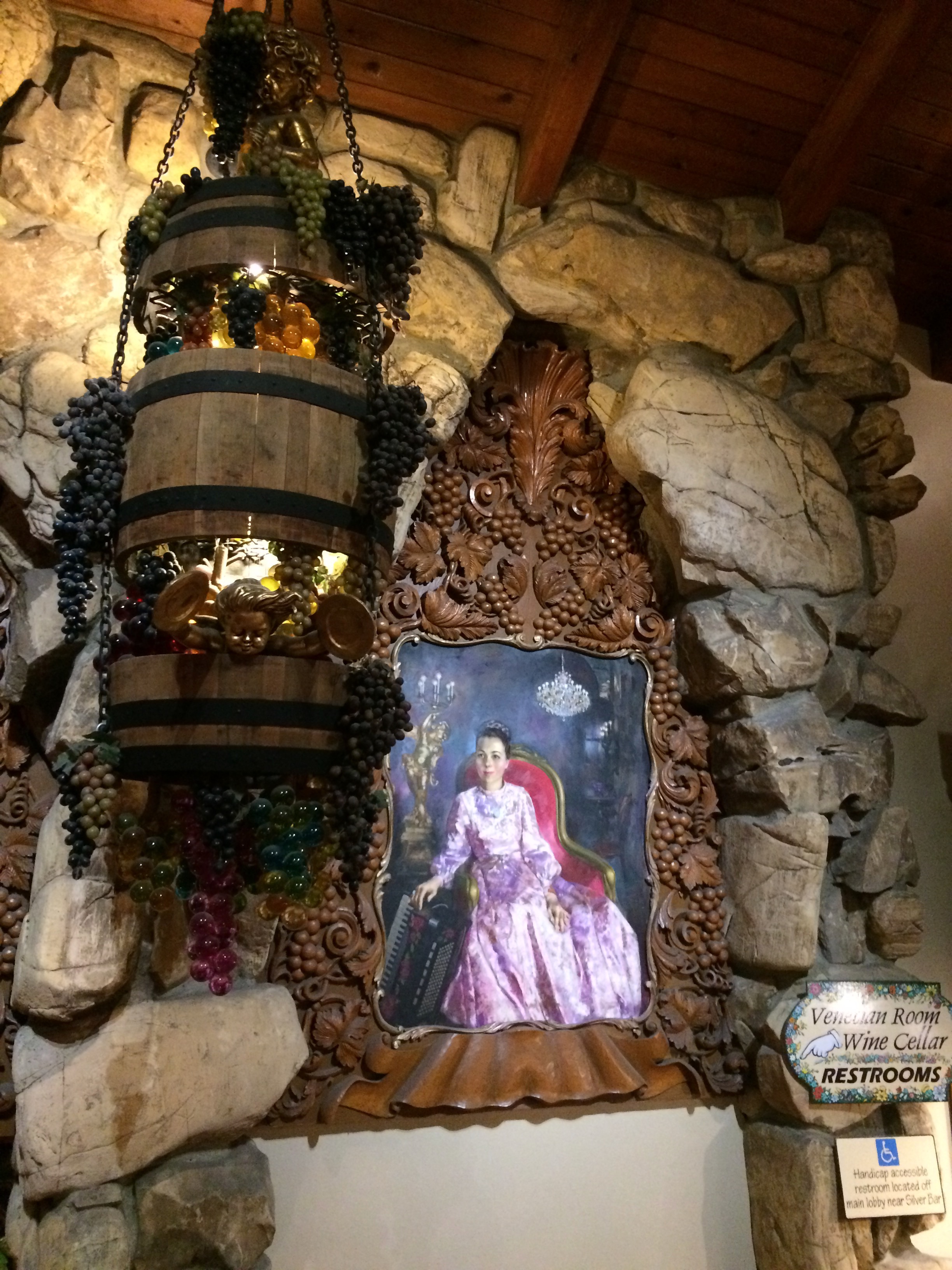 Portrait of Phyllis Madonna, with the accordian she has long played (photo Nikki Kreuzer)

The construction continued from 1958 into the early 1960s. The Copper Cafe coffee shop opened in 1960, and its circular eating counter gives the impression of a horseless carnival carousel full of pomp, circumstance and spectacle. Its paneled walls are accentuated with carved wood in a 1960s meets Swiss chalet style, featuring the large engraved message, “Let’s Eat and Be Forever Happy.” Booths are circular as well, made of deep red leather surrounding hammered copper tables. Murals of native Americans and teepees in Old West fashions flank the walls behind. Glass display cases hold cakes as elaborately decorated as the rest of the inn. With shaved chocolate ribbons in white, pink or brown and frosted to compete with the most frou frou wedding cake, these treats were originally created by Phyllis Madonna in the Inn’s initial years. The Pink Champagne and Black Forest cakes are the grandest of all, each standing nearly a foot tall. 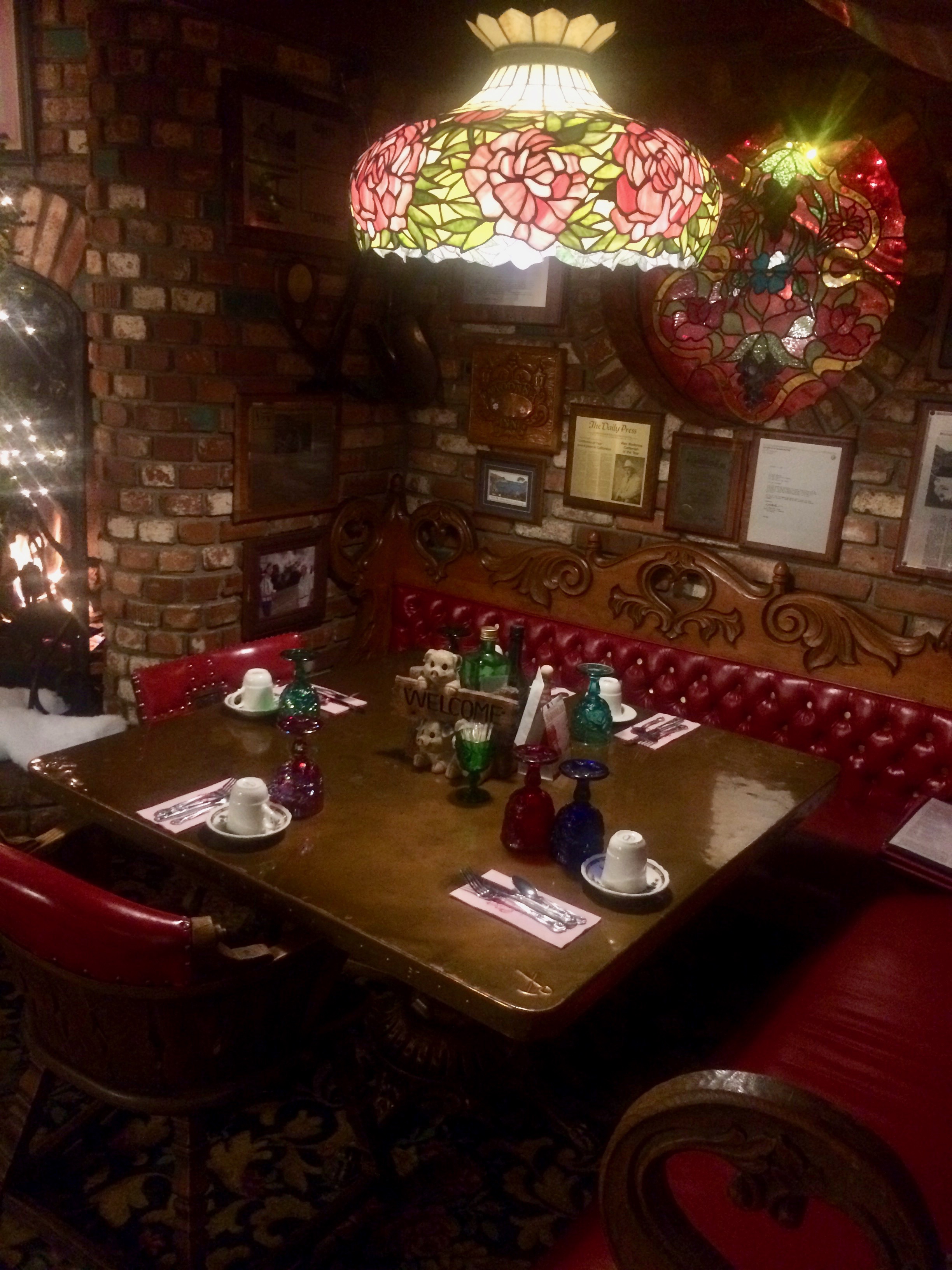 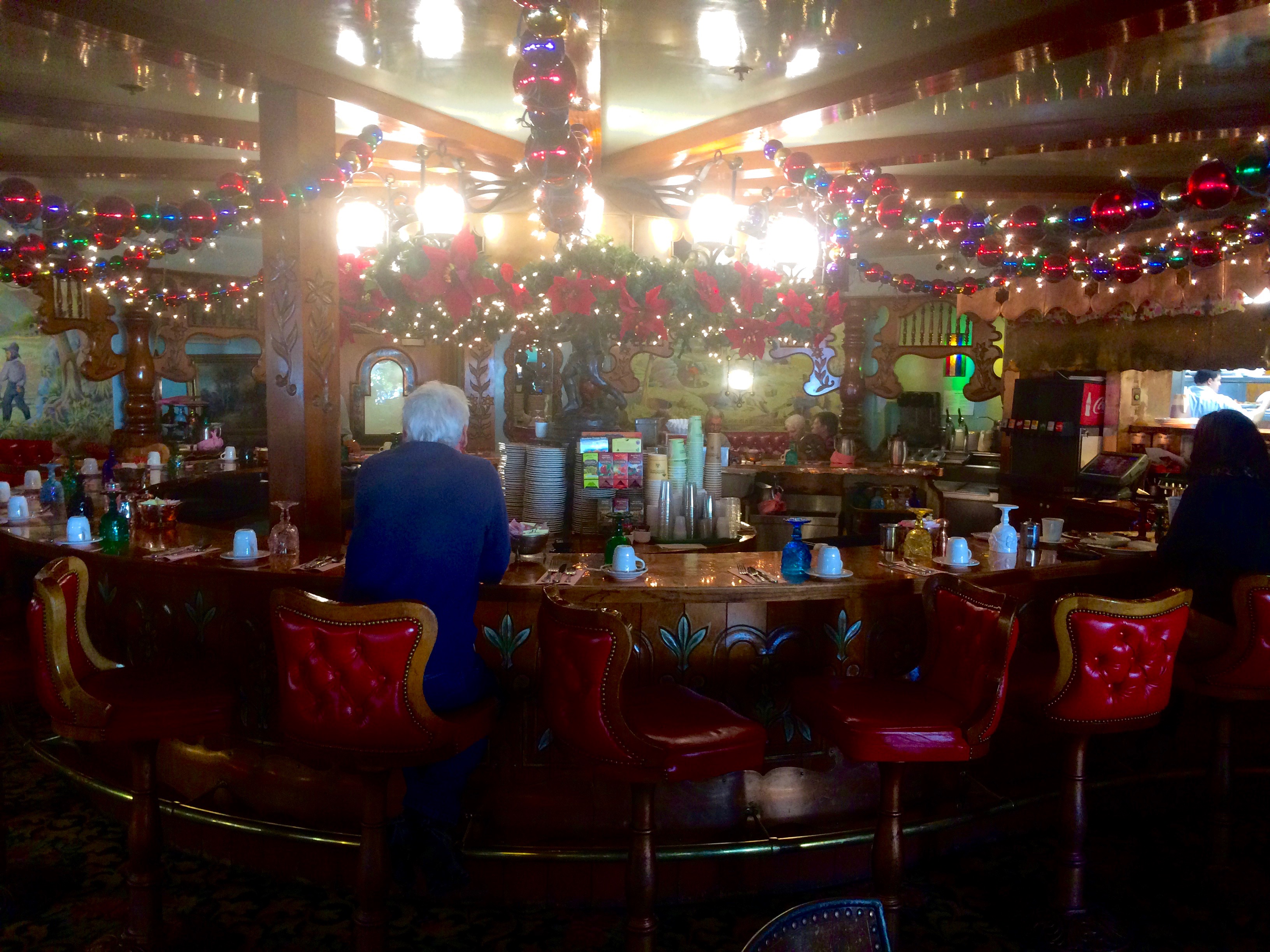 The Gold Rush Steakhouse, a fine dining room spotlighting shades of blush, rose and magenta, accented with glittering gold, was completed in 1962, along with a wine cellar and conference room. By this time the inn had 40 guest rooms total, all with specific themes, no two remotely alike. That year a pre-dawn fire destroyed the portion of the hotel holding the original 12 rooms, and so it was back to the drawing board with planning and fabrication, until finally there were the 110 rooms that now stand today. Alex Madonna passed away in 2004 at age 85, leaving behind the dream he created, along with his wife, four children and at least ten grandchildren. At his funeral, his family dressed in pink, a most fitting honor to Alex’s commitment to happiness and optimism. His casket was transported to the cemetery in a horse drawn carriage as he continued his fairytale path toward eternity. In 2017 Phyllis can still be found around the inn, though it is her daughter, Connie Pearce, who operates as General Manager, along with Connie’s husband, Clint. The legacy Alex and Phyllis created by building the Madonna Inn and following their unconventional path to happiness has had a Pied Piper effect. The magic remains. With each visit brings a new smile, a fresh laugh, a recharged open heart. It is quite a fine heritage, and exactly what Alex Madonna intended to leave behind. 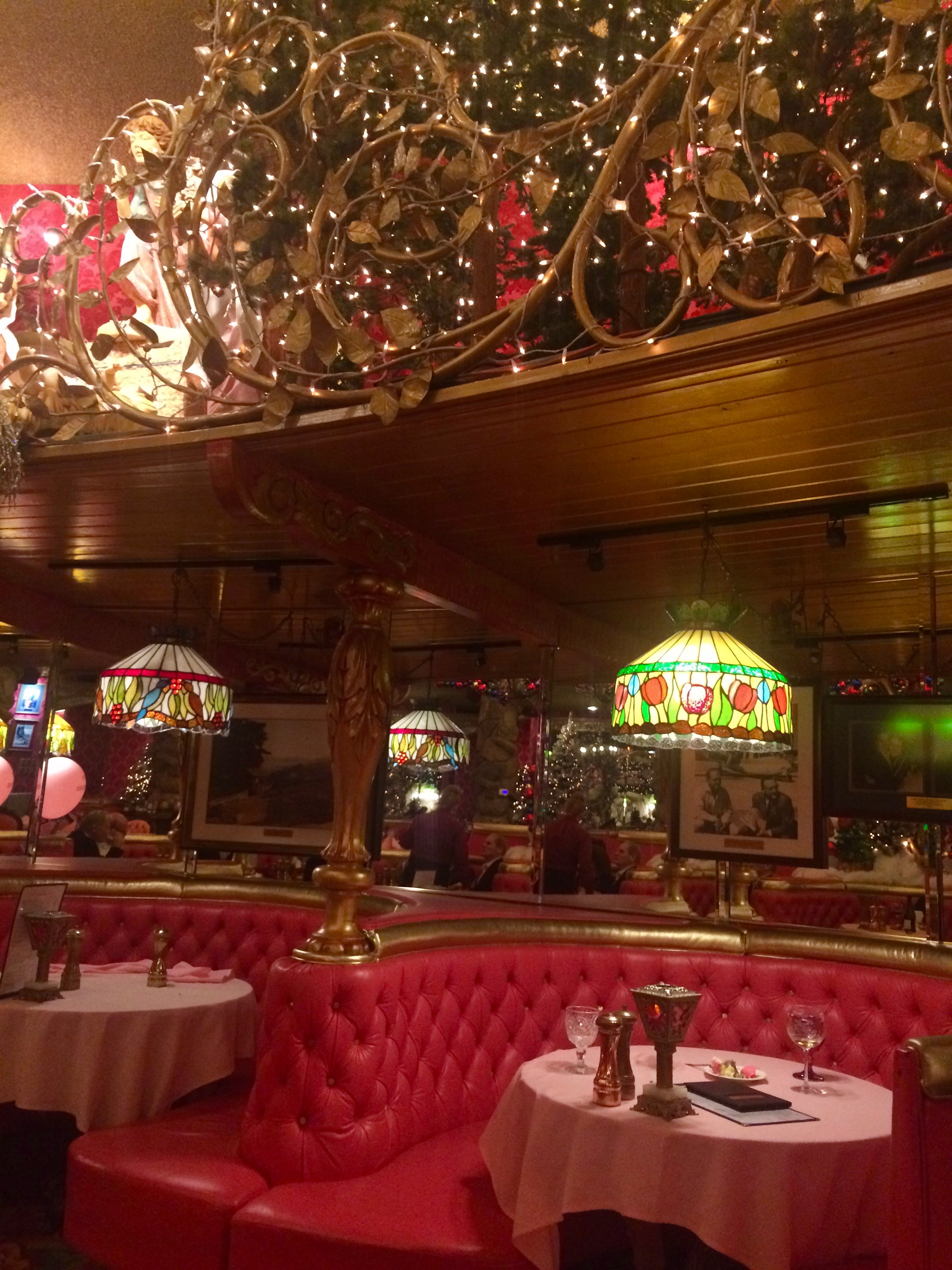 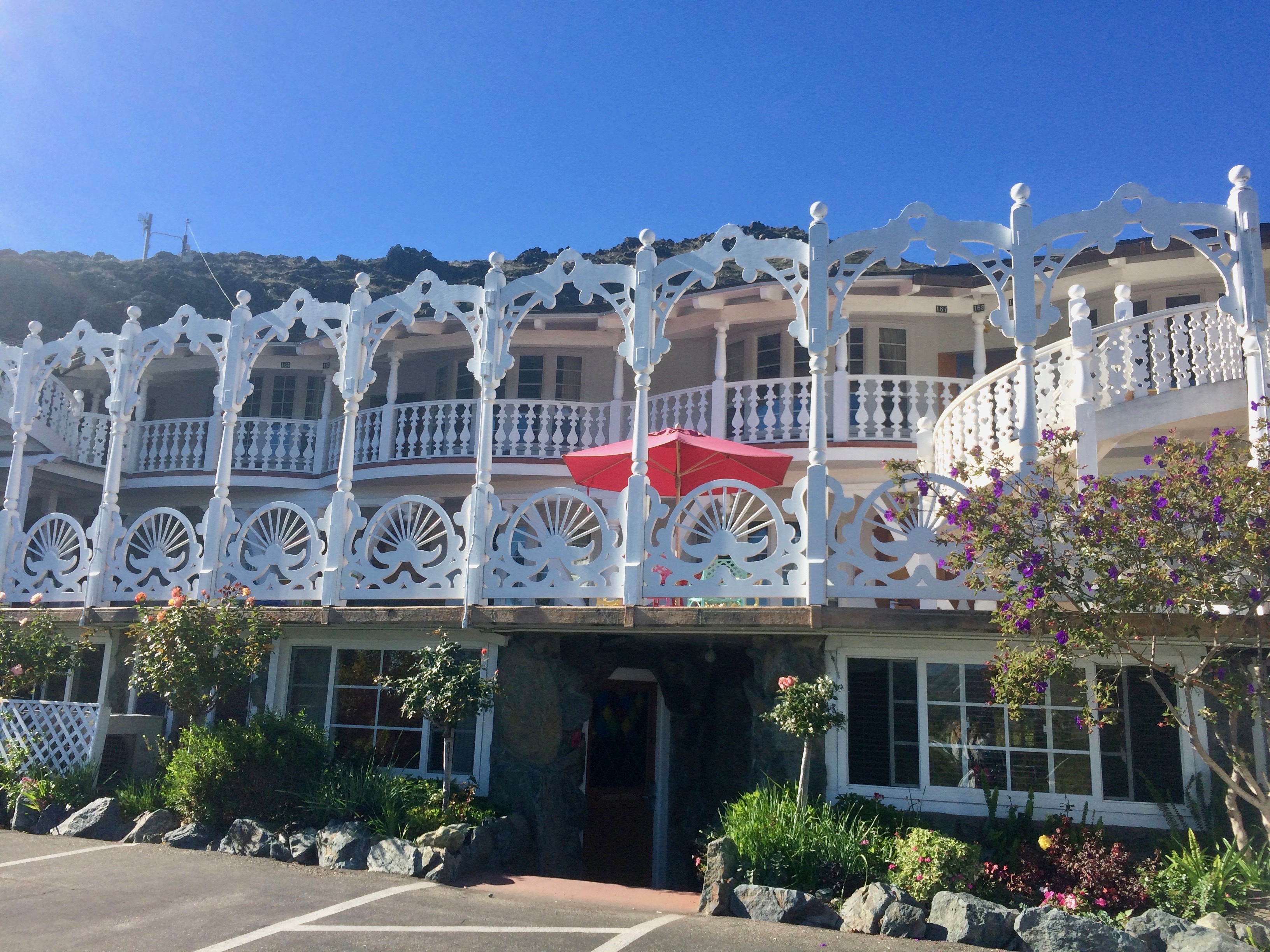 The exterior of the Madonna Inn (photo Nikki Kreuzer) 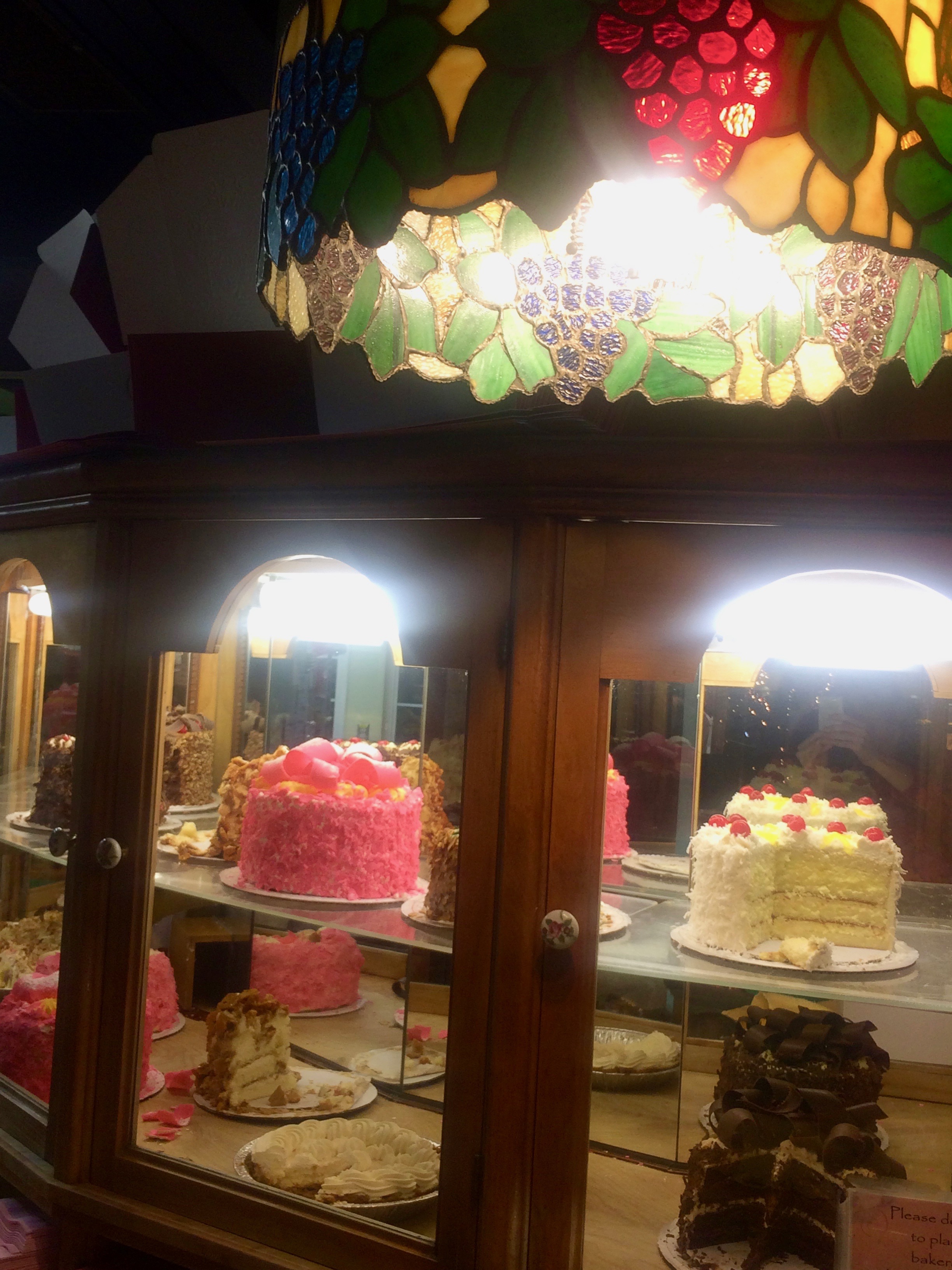 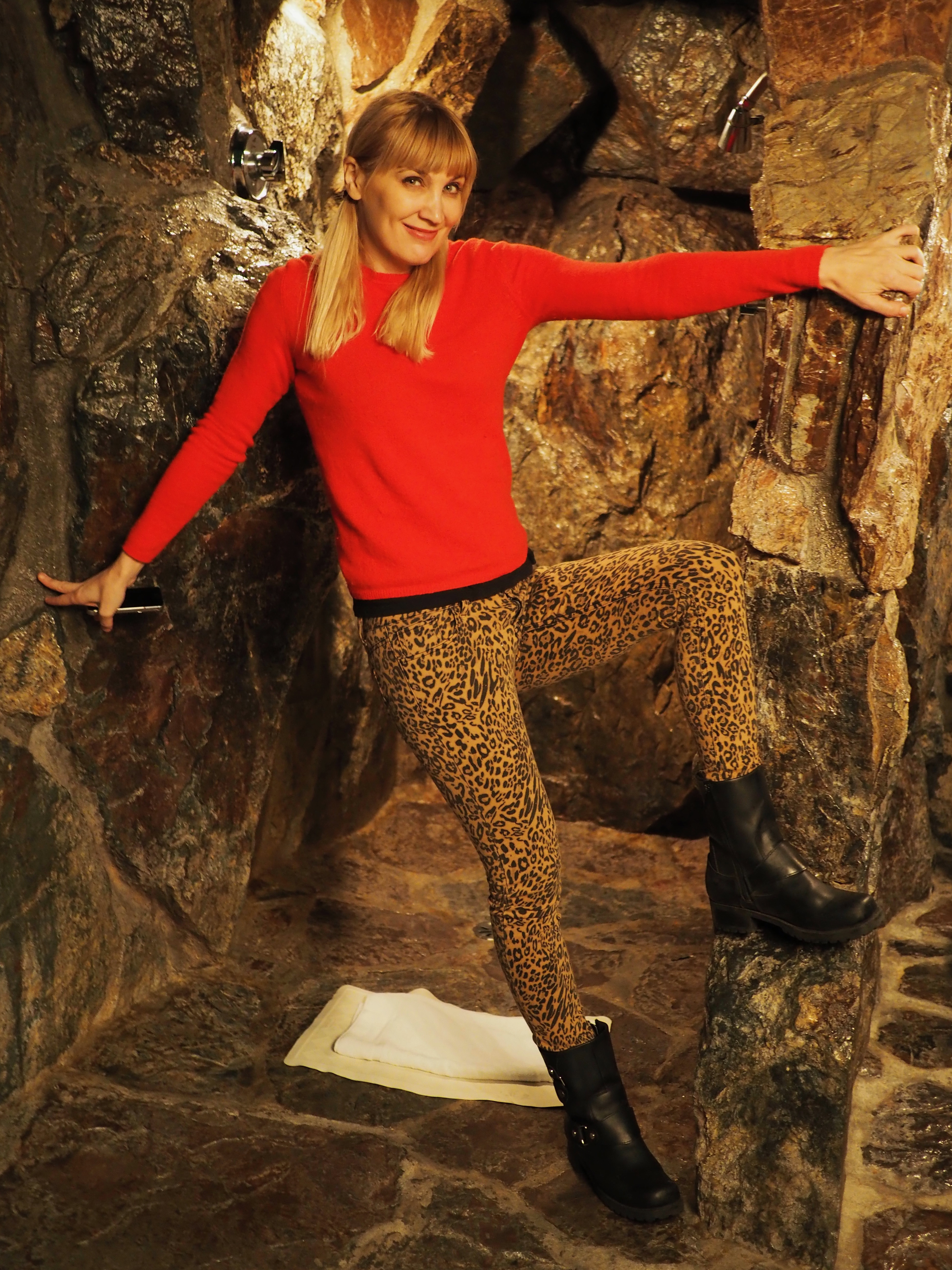 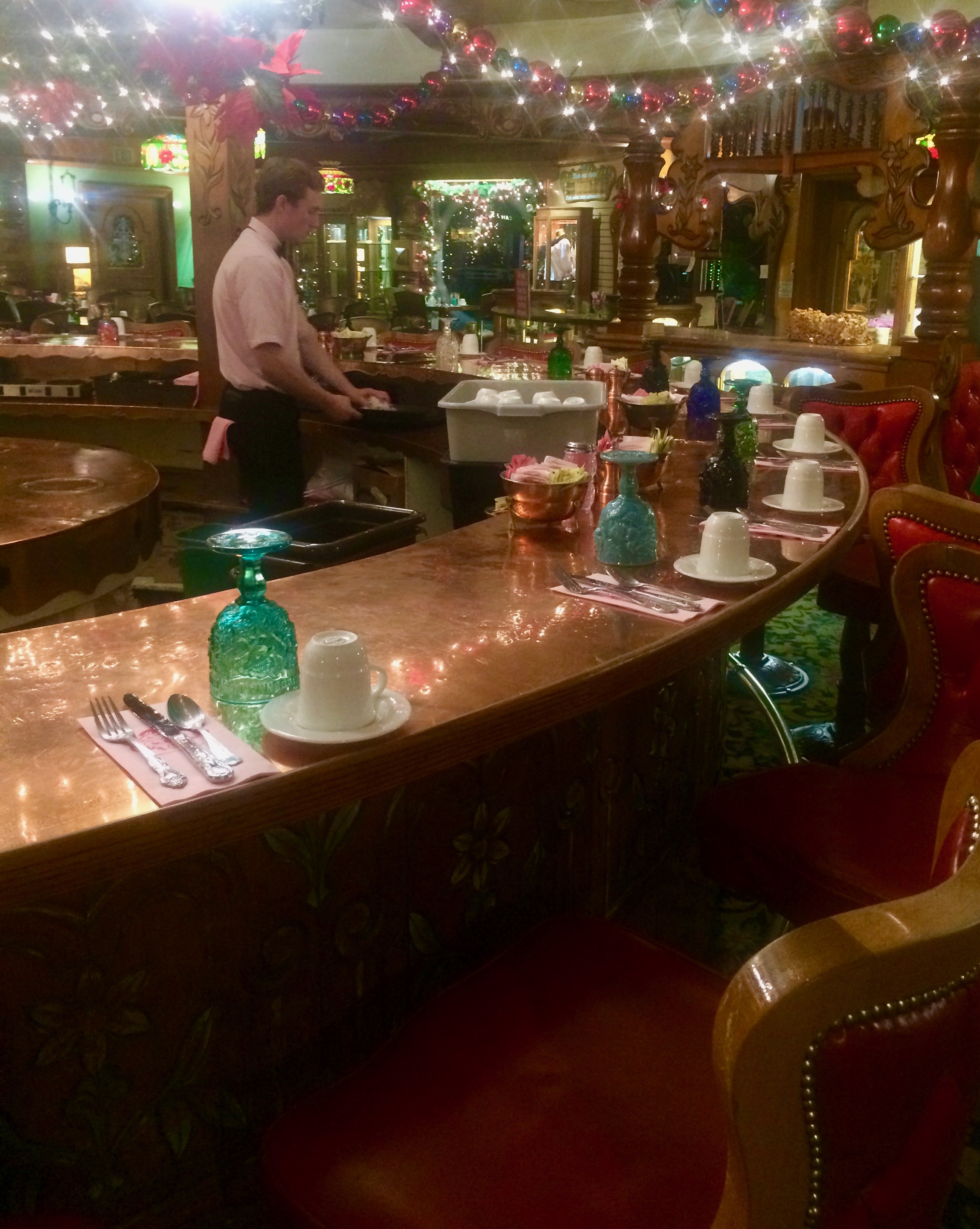 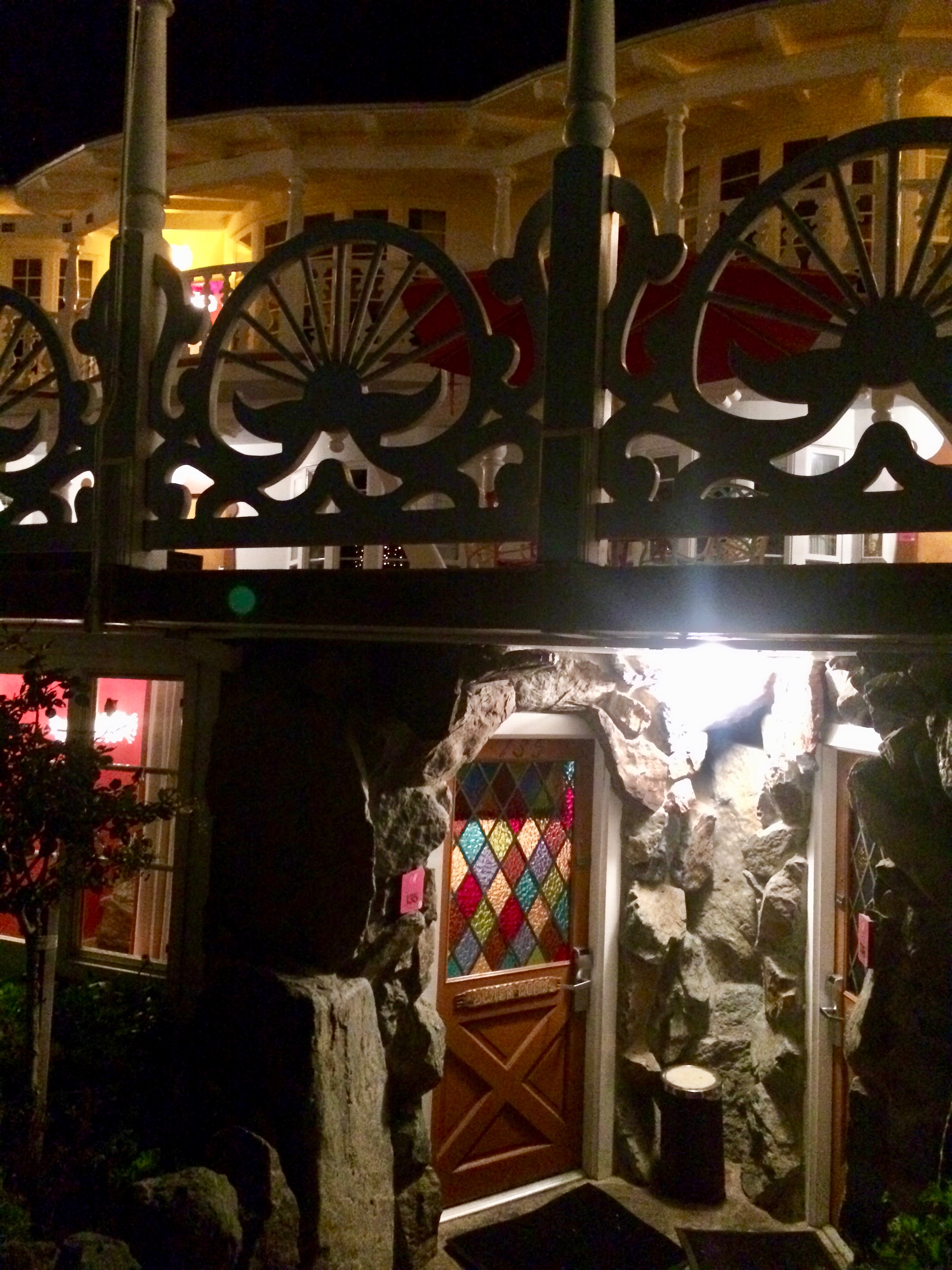 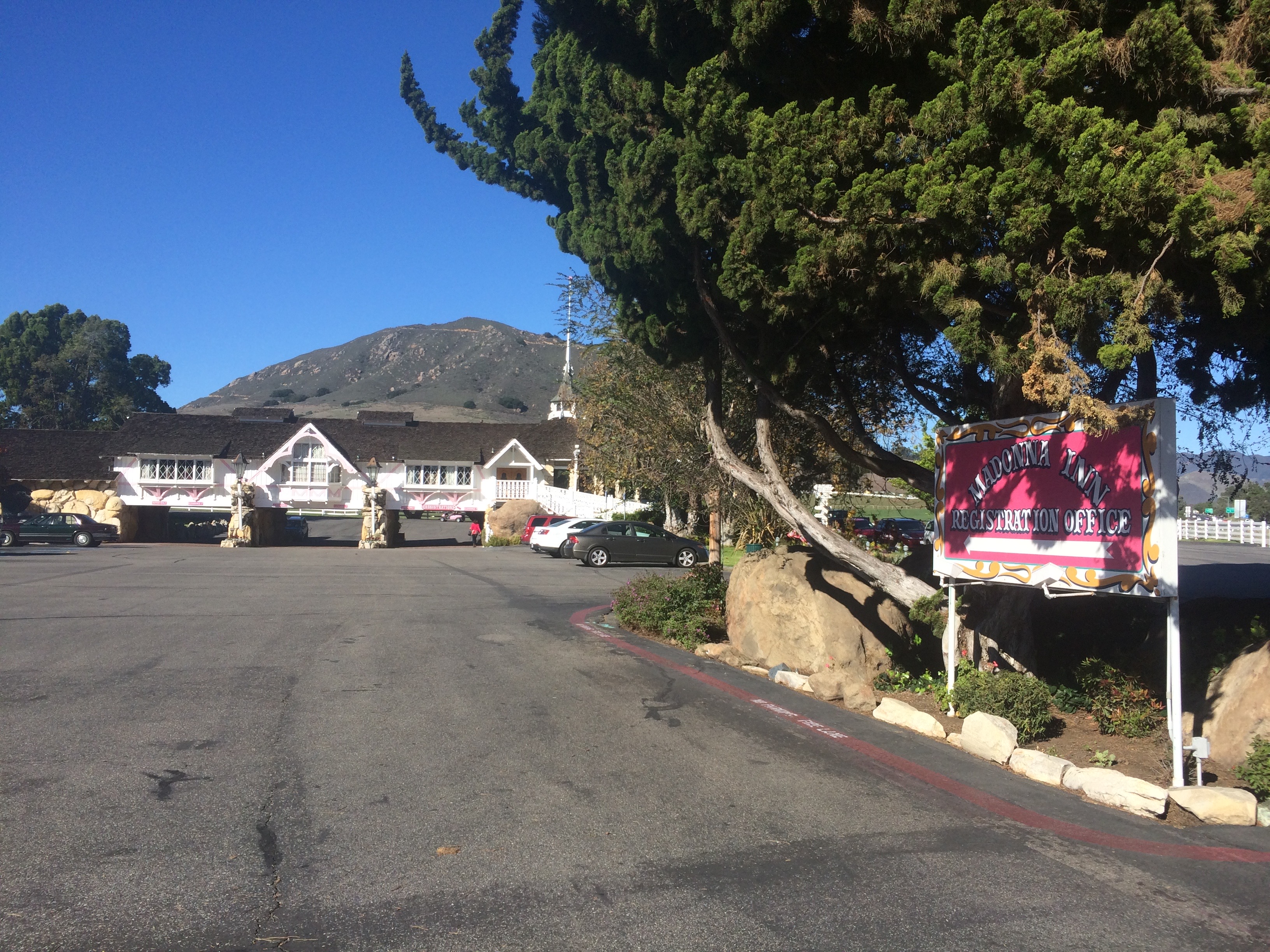 Coming up the road to the Madonna Inn (photo Nikki Kreuzer)

Nikki Kreuzer has been a Los Angeles resident for over 30 years. When not working her day job in the film & TV industry, she spends her time over many obsessions, mainly music, art and exploring & photographing the oddities of the city she adores. So far she has written 110 Offbeat L.A. articles, published at the Los Angeles Beat. As a journalist she contributes regularly to LA Weekly, Blurred Culture and The Los Angeles Beat and has also been published by Oddee.com, Twist Magazine, Strobe and Not For Hire. Nikki is also a mosaic artist, radio DJ and published photographer. Her photography has been featured in exhibit at the Museum of Neon Art, in print at the LA Weekly and is part of an upcoming show at the Neutra Museum in Los Angeles. She has recorded with the band Nikki & Candy as bassist, vocalist and songwriter, directing and appearing in the 'Sunshine Sunshine Santa Claus' music video for the band. She co-hosts the monthly radio show Bubblegum & Other Delights on Dublab.com. Her acting credits include a recent role in the ABC-TV show 'For The People', 'Incident at Guilt Ridge', 'Two and a Half Men', the film 'Minority Report' and 'Offbeat L.A.', a web series, written and hosted by Nikki Kreuzer. Her writing, radio and video portfolio can be found at OffbeatLA.com, her photography work @Lunabeat on Instagram and her music history posts @NikkiKreuzer on Twitter. Find Nikki & Candy music on iTunes, Amazon or at NikkiandCandy.com.
View all posts by Nikki Kreuzer →
This entry was posted in Attractions, Miscellanious, Offbeat LA and tagged Hotel, Madonna Inn, Nicole Kreuzer, Nikki Kreuzer, San Luis Obispo. Bookmark the permalink.

4 Responses to Offbeat L.A.: The Madonna Inn – Happiness in San Luis Obispo is a Palace of Kitsch