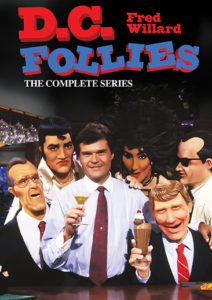 Primetime comedy series created by Sid and Marty Krofft, who took a tip from the UK’s “Spitting Image” and employed puppet caricatures to satirize the then-current political and pop cultural landscape; Fred Willard, as the bartender at a Washington watering hole where the puppets gather, is the only regular human in view, though guests ranging from Betty White to Mike Tyson also turned up to interact with the soft sculpture celebrities. As political and cultural humor goes, “D.C. Follies” harvested almost exclusively low-hanging fruit – Ronald Reagan is dim and trigger-happy, George H.W. Bush is hapless, Richard Nixon a bungling schemer, and you can assume how Sylvester Stallone, Dolly Parton, Madonna and Tammy Faye Bakker played in puppet form. Relegating Fred Willard, one of the funniest people in existence, to serve as straight man was another misstep, though it probably contributed to Martin Mull appearing on the show, which can only be considered a win. As observed from three decades of distance, “D.C. Follies” is a prime example of a Show That Probably Worked Better on Paper, though TV obscurity and oddity fans will probably find the whole experiment fascinatingly off-kilter, and wonder how an updated version based on the current administration might play (my guess: terrifying). Shout Factory‘s set, which collects all 44 episodes of the two-season series, is representative of the label’s dedication to unearthing eclectic entertainment – even oddball items like this one.

Paul Gaita lives in Sherman Oaks, California with his lovely wife and daughter. He has written for The Los Angeles Times, LA Weekly, Variety and The Fix, among many other publications, and was a home video reviewer for Amazon.com from 1998 to 2014. He has interviewed countless entertainment figures from both the A and Z lists, but his favorites remain Elmore Leonard, Ray Bradbury and George Newall, who created both Schoolhouse Rock and the Hai Karate aftershave commercials. He once shared a Thanksgiving dinner with celebrity astrologer Joyce Jillson, and regrettably, still owes the late character actor Charles Napier a dollar.
View all posts by Paul Gaita →
This entry was posted in Television and tagged shout factory. Bookmark the permalink.