‘Through The Eye Of A Needle’ A Beautiful, Moving Play About Loss 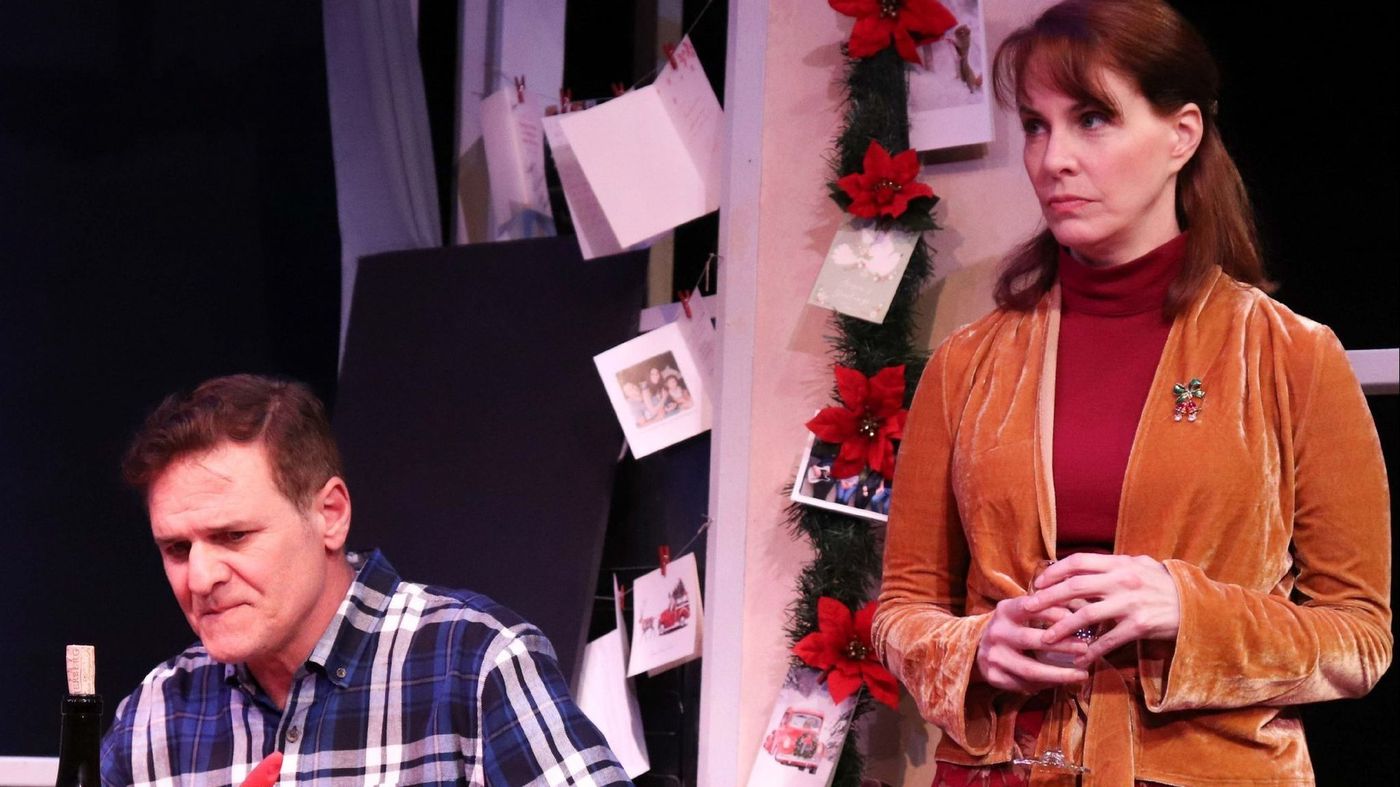 Through The Eye Of A Needle at the Road Theatre in North Hollywood. (Photo by Brian M. Cox)

I absolutely loved this play. It not only made me laugh out loud, but in the end, it moved me to tears, which always makes for a great theatre experience. “Through The Eye Of A Needle,” written by Jami Brandli and directed by Ann Hearn, takes place on Christmas Eve. The year is 2011 and we are in Fort Lee New Jersey.

It’s here we meet the Keen family, who are dealing with the recent tragic loss of their daughter Dana, a Navy corpsman, who lost her life in the Iraq War. Larry (the excellent David Gianopoulos), drowns his pain with tumblers of scotch, while his wife, Barbara (the wonderful Meeghan Holaway), always sets an extra place at the head of the table for Dana because she can’t face the reality that her daughter will never be coming home again. At the same time, their teenage daughter, Samantha (Kaitlin Huwe) deals with the loss of her sister by staging protests via Twitter. This is a family on the brink.

Just when you thought the tension could not get any worse, enter Bill (Chet Grissom) a pompous, self-righteous Pastor that Larry can barely tolerate. He brings along his wife, the highly medicated Shirley (the hysterically funny Stephanie Erb). Stephanie’s pitch-perfect comic timing practically steals the play.

Also present in the Keene household is Dana’s ghost (Kara Hume), who constantly lets the audience know the truth beneath her family’s pain. Before anyone can sit down to dinner, a blizzard hits and Larry informs the family that he may have to leave to help clear the roads. His wife accuses him of not only avoiding dinner, but avoiding the tribute that the Pastor is going to pay to Dana at Midnight Mass. But it’s the arrival of a mysterious visitor, Nasser (Erica Matlin), an Iraqi refugee who brings the family a gift from Dana that might be the final straw that tears this family apart for good…or maybe not.

Joan was born in Brooklyn and spent many years working as an actress in New York City. Even though she traveled extensively, Joan couldn't imagine living anywhere else.. Well one day, she met someone at a party who regaled her with stories about living in L. A. specifically Topanga Canyon. A few weeks later she found herself on an airplane bound for Los Angeles. Joan immediately fell in love with the town and has been living here for the last twenty years and yes, she even made it to Topanga Canyon, where she now resides, surrounded by nature, deer, owls and all kinds of extraordinary alien creatures.. Joan continued acting, but for the last several years (besides reviewing plays and film) she has been writing screenplays. Joan was married to a filmmaker who created the cult classic films, (way before she knew him) Faces of Death. As a result of his huge following, they created a funny movie review show entitled Two Jews on Film, where Joan and her husband, John would review movies and rate them with bagels You can see their reviews by going to youtube.com/twojewsonfilm. Although it's now only one Jew - Joan is occasionally joined by her beautiful Pekingnese and Japanese Chin.
View all posts by Joan Alperin →
This entry was posted in Theater and tagged 'Through The Eye Of The Needle, Comedy, Drama, Family, Loss, NoHo, Road Theatre Company, Theatre Review, War. Bookmark the permalink.

2 Responses to ‘Through The Eye Of A Needle’ A Beautiful, Moving Play About Loss