Pole Show LA is Saturday May 12th: An Exciting Night of Aerial Arts and Pole Dancing! 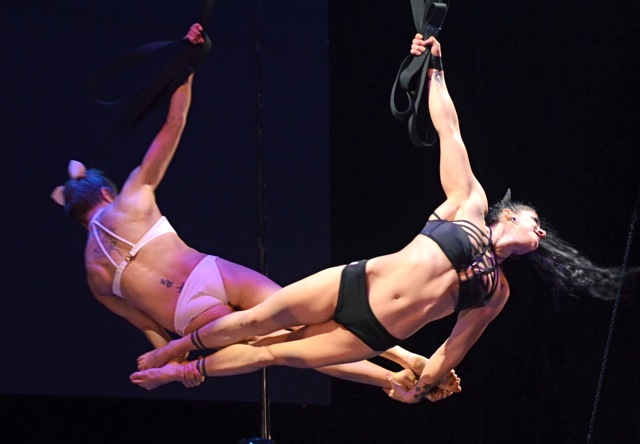 Pole Show LA is an extension of Leigh Ann Reilly of Be Spun’s vision to facilitate an accomplished troop of athletically gifted creatives to perform and entertain using Pole Dancing as their medium of artistic expression, using the beauty of the human form in aerial and acrobatic performances. Reilly describes Pole Show LA as “Cirque du Soleil meets the Victoria’s Secret Fashion Show.” These are glamorously themed and exquisitely executed dance performances that light up the eyes and fire up the imagination.

Having been to one of the Pole Show LA performances a couple of years back, Pole Show LA at The Avalon: What Did That Look Like?, the show is visually stimulating, the choreography is stunning, and the performances exemplify the highest order of athletic ability. Every sold-out show is an unrivaled night of entertainment with performances in aerial arts and pole dance, showcasing the sexiness, strength and showmanship of dozens of top performers on a rock concert stage!

Pole Show has garnered a great deal of international exposure over the last year. Reilly was booked by Philipp Plein to choreograph and cast a show of 30 pole dancers for Men’s Fashion Week in Milan, featuring many Pole Show LA past and present performers. After performing in Las Vegas at the House of Blues back in September, she is “thrilled to bring it back to where it all began, here in LA. Reilly says, “It’s a show unlike any other, I like to call it the ‘Super Bowl of Pole Dance.’ It’s a perfect fit for the exciting Hollywood entertainment scene.”

Pole Show LA will be at the Avalon Hollywood on Saturday, May 12, 2018, for one night only! Pole Show LA starts at 8:00 p.m., with doors opening at 7:00. Tickets to Pole Show LA range in price from $49 to $249 for a premium VIP seat with champagne. The Avalon Hollywood is located at 1735 Vine Street in Los Angeles. Don’t miss this spectacular night of aerial art and entertainment!

Billy Bennight is a writer, photographer and wardrobe stylist with expertise and years of experience in these disciplines. His musical youth started as a Punk Rocker and has expanded into exploring many genres of music, with an keen interest in art, fashion, photography and writing. He shoots celebrity events and red carpets for The Photo Access and ZUMA Press. He is a member of the Los Angeles Art Association. His images have been published in The Los Angeles Times, People Magazine, Wall Street Journal and Vanity Fair. He's very engaged in life. You can follow him on his Facebook page at: www.facebook.com/billybennightartist and on Instagram and Twitter @billybennight
View all posts by Billy Bennight →
This entry was posted in Art, Events, News & Sports, Upcoming Events and tagged Ariel Art, Avalon Hollywood, Be Spun, Billy Bennight, Cirque du Soleil, Dnace, Leigh Ann Reilly, Performance, Pole Dancing, Pole Show LA, Victoria’s Secret. Bookmark the permalink.