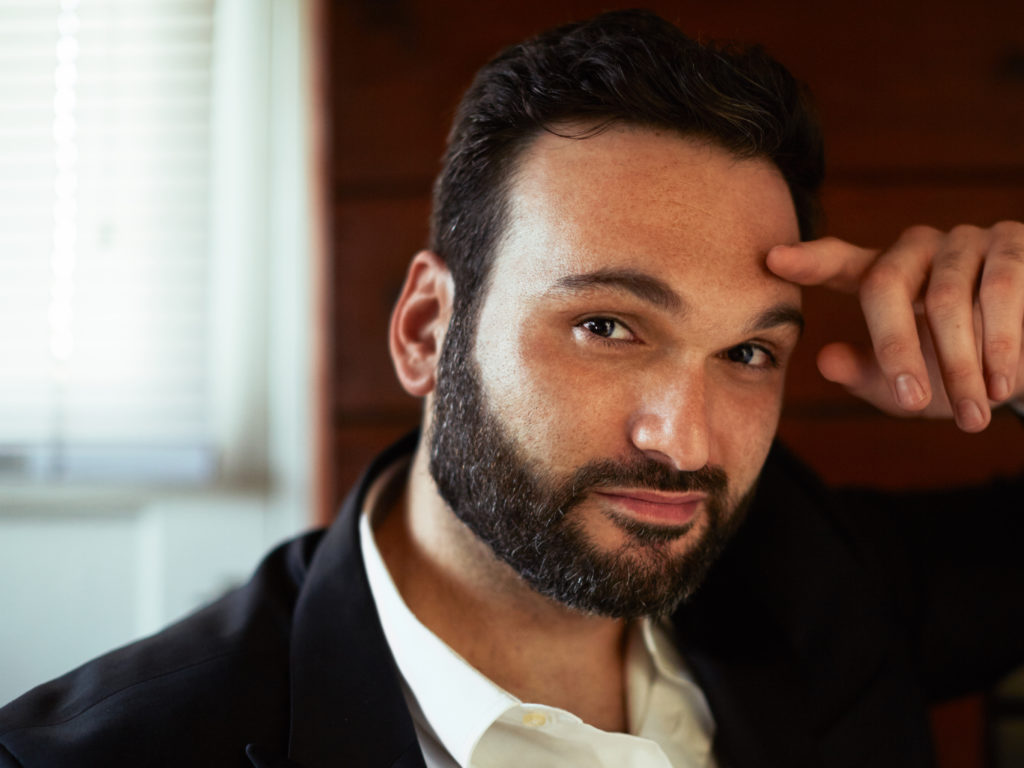 Photos of Nemr Courtesy of Jeff Abraham at Jonas PR

Nemr is coming to the Irvine Improv on May 10, 2018, and to Levity Live in Oxnard from July 26 to July 29 with his latest comedy show, “Love Isn’t the Answer.” Lebanese born, his parents brought 3 year old Nemr Abou Nassar to the United States, where he grew up in Southern California before his family returned home to Beirut when he was 10 years old. Influenced by the standup comedy of Dana Carvey and many other standup comedy stars, Nemr believes that by making everyone laugh together, comedy and laughter are the keys towards helping us all to put aside our differences. In the Middle East, he is an international comedy star who brought standup comedy to that region, where he regularly sells out large concert halls and arenas with his shows. Nemr recently talked with The Los Angeles Beat about his thoughts, his comedy, his upcoming shows in Irvine and Oxnard; and his hope for what his voice can accomplish through laughter.

Q: You’ve turned into the creator of Middle Eastern comedy. Did you think that comedy was needed there to bring people together?

A: The thing that is interesting about the Middle East is that it is probably one of the funniest places on Earth, effectively. The Middle Eastern people have an incredible sense of humor. They always use comedy as a way to deal with the turbulence that’s going on around. So I did standup comedy—a lot of people tell me that I brought stand-up comedy to the Middle East. I say that all I did was bring the industry. It was almost as inconceivable that it wouldn’t have happened sooner or later, because the entire culture of the people was geared towards observational humor—taking a look at terrible circumstances and stating them in very funny ways. At the end of the day, laughter strengthens the spirit; and when you’re in a region where spirit is up for grabs, there is no better way to maintain your idea than that.

Q: These days, you’ve been on a Showtime special, had two feature specials of your comedy, as well as a hugely successful string of comedy touring shows. Did you always think your standup comedy would achieve this? 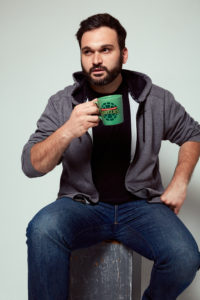 A: I’ll be honest with, yes, I didn’t think I’d achieve exactly this, but I always felt that I had something that I really wanted to put out there, and I had a perspective that I wanted to get across. I felt that if people could just see things the way that I see things, the world would be a much better place. I was never deterred by people saying ‘Everybody’s like that, you’re just a dreamer.’ I know, I really had this feeling that I was kind of destined to get my voice out there. To that effect, with everything that I’ve done so far, I really feel like I’ve done nothin—when I feel like I have so much more to do, because where I’m trying to get to is so much bigger than this. It’s not about selling a special or selling out a tour or being recognized on the street, it’s about making an actual difference—like really making a change and being able to do that. Your voice needs to be as respected and powerful as possible, so when you speak you can actually change a narrative that’s coming through that might be wrong. I haven’t gone there yet—I was able to pull that off in the Middle East, I’m a voice to be reckoned with—but globally, in the U.S., I’m not a voice to be reckoned with yet. Until I become a voice to be reckoned with, everything that I’ve done really means nothing. That’s how I see it and it keeps me going to push harder. That’s why I have all these things going on, I know there’s so much to do and I’m not going to stop until I get there.

Q: You’ve got shows coming up in Irvine and in Oxnard. Are the audiences here getting the message?

A: Yes, audiences all over in America are. I’m in Boston right now, Buffalo tomorrow. We’ve done shows in Utah, New York, Nashville, Atlanta—and I’m trying to get into every city that I can, because there’s one thing that I can tell you unequivocally, I’m undeniably funny, genuinely funny. As a means of getting the message, if people are laughing, genuinely laughing—and I’m not saying a group of people—I’m saying if you are getting everybody to laugh, whether you are going to Utah, in Ogden and performing in from of a mainly white, Mormon audience, or you’re going to Atlanta where there’s a lot more black people in the audience, or you’re going to Phoenix or to Boston where there’s a younger demographic, or going to Los Angeles where it’s more Hollywood; if all these people are laughing at the same show and coming up after and saying it’s the funniest thing they’ve seen and telling their friends and it’s growing, then it means they’re getting the message, because laughter is the best indicator in the world that you’ve gotten through. You’ve planted a seed, because my goal is simple—if I can make everybody laugh, then I’ve been doing my job.

It’s always been about getting the most people to laugh and getting my message across through that method. I use it as a bait and switch, I use laughter as a distraction. I want you to be laughing so hard that you don’t even realize that I’m challenging everything you’ve ever believed in, until after you leave the show and that’s when I get the messages. After every show, people get up on my social networks or emails, saying ‘Its been a couple of days and I just wanted to say, it just hit me when you were talking about that event and we wound up getting into a discussion.’ It’s like people, when they are listening to a good CD, you don’t get it from the first try. I use laughter to try and distract people because people will come in with their biases and they won’t listen to what you want to say, but laughter is a good way to sweep the rug out from under them.

Q: Did making the cover of Rolling Stone Magazine fortify your quest to bring stand-up comedy to the Middle East?

A: You can’t overstate how important it is for any artist to make the cover of Rolling Stone. Even though it’s the Middle East Edition, it’s just as prestigious as it is here in the U.S. What it did for me is it legitimized my entire career, in the sense that this is an industry that didn’t exist before I started. It was 2014 that I made that cover. It’s basically a legitimization of my efforts to normalize this industry. ‘It exists; it is being taken so seriously that he’s selling out everywhere and even Rolling Stone Magazine has acknowledged what he’s done’. The funny thing was, when I got on the cover of Rolling Stone Magazine I kept it a secret that I was going to be on the cover. When I got on the cover of Rolling Stone Magazine, it was a few days before I posted the image on my social networks. I said that it would be a total game-changer. I remember everybody commenting, ‘Yeah man, you know positive realization, so cool that you’re keeping your goals in mind and maybe one day it will happen.’ They thought it was this Photoshop that was coming out and everybody thought it was a Photoshopped picture! What’s really cool about the Middle East is that it keeps you humble, no matter what you achieve. They still keep you in check! It was a great legitimization of everything I had done and when it came out everybody saw it. It was legit, but at the same time, it didn’t mean that I could stop doing what I was doing or that I should start to get comfortable.

Q: So what about the new show?

A: The new live show, Love Isn’t the Answer, is called that because of the world that we’re in today. You take a look around and there’s so much hate, but a lot of people say all you have to do is spread love and it will change a thing. But, unfortunately, it won’t change a thing. The only thing that’s stronger than hate is a better and more powerful hate. This is what the show’s central theme is about, the power and the positivity of hate in the right hands. The central example I use is an example of when two people are in love and people don’t want them to be together. They fight to stay together, not because they love being together, but because they hate being apart. If you start to associate the word ‘hate’ in that sense, then you start to realize that when we are confronted with hate, we shouldn’t respond with love, but with that same hate to preserve love. That’s basically what the show is about, obviously in a very funny way. It’s not a dissertation, but that’s why it’s called Love Isn’t the Answer. It’s a call for people to get angry, it’s a call for people to get real.

Q: Thanks, Nemr! It should be a great show to see!

Nemr’s new comedy tour is coming to the Irvine Improv on Thursday, May 10, 2018. He’ll return to Southern CA from July 26 to July 29, 2018, for performances at Levity Live in Oxnard. It’s an incredibly funny show and also a thought-provoking one. In the tradition of standup comedians such as George Carlin, Nemr not only makes you laugh, but makes you think too.

Photos of Nemr Courtesy of Jeff Abraham at Jonas PR

Ed is a native of Los Angeles who loves food and food cultures. Whether he's looking for the best ceviche in Colombia, the best poke in Hawaii, the best tequila in Jalisco or the best Taiwanese Beef Roll in Los Angeles, it's all good food! He also loves a good drink. He's had Mai Tais in Hawaii, Bourbon in Kentucky, Tequila in Mexico and Rum in Jamaica. His wine escapades have taken him to Napa, Sonoma, the Willamette Valley and the Santa Ynez Valley. And he's had beer all over the world! Music is another of Ed's passion, writing and interviewing many classic rock, rock and blues musicians. Getting the great stories of road experiences from them is a particular delight. Traveling also fits in with Ed's writing, exploring all over to find the most interesting places to visit, even in out of the way areas.
View all posts by Ed Simon →
This entry was posted in Interviews, Upcoming Events and tagged Comedy, Irvine, Lebanon, Levity Live, Middle East, Nemr, standup comedy, The Improv. Bookmark the permalink.