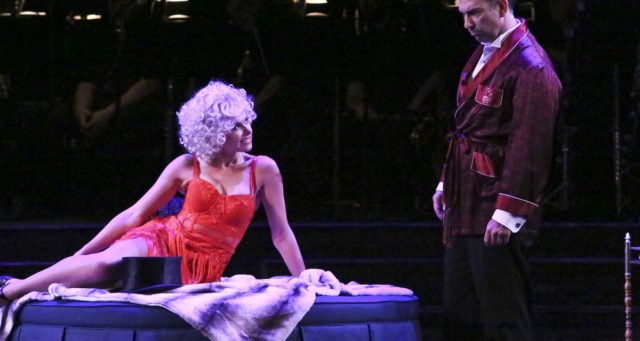 Reprise is back and now christened Reprise 2.0. The company, which presents musicals that are either lesser known or rarely revived locally, is producing a three-show season at its former home, UCLA’S Freud Playhouse in West Los Angeles

If this is any indicator of the type of shows they put on, Reprise will certainly do very well. Next on their agenda is “Victor/Victoria” directed by Richard Israel and choreographed by John Todd. The cast hasn’t been set yet, but it runs September 5-16, 2018.

One of my older favorites, “Grand Hotel,” starring Carmen Cusack (‘Bright Star’ on Broadway), directed by Arthur Allan Sideman and choreographed by Kay Cole ends the season with an October 24, 2018 through November 4, 2018 run.

Joan was born in Brooklyn and spent many years working as an actress in New York City. Even though she traveled extensively, Joan couldn't imagine living anywhere else.. Well one day, she met someone at a party who regaled her with stories about living in L. A. specifically Topanga Canyon. A few weeks later she found herself on an airplane bound for Los Angeles. Joan immediately fell in love with the town and has been living here for the last twenty years and yes, she even made it to Topanga Canyon, where she now resides, surrounded by nature, deer, owls and all kinds of extraordinary alien creatures.. Joan continued acting, but for the last several years (besides reviewing plays and film) she has been writing screenplays. Joan was married to a filmmaker who created the cult classic films, (way before she knew him) Faces of Death. As a result of his huge following, they created a funny movie review show entitled Two Jews on Film, where Joan and her husband, John would review movies and rate them with bagels You can see their reviews by going to youtube.com/twojewsonfilm. Although it's now only one Jew - Joan is occasionally joined by her beautiful Pekingnese and Japanese Chin.
View all posts by Joan Alperin →
This entry was posted in Theater and tagged 'Sweet Charity, musicals, reprise, UCLA'S Freud Playhouse. Bookmark the permalink.