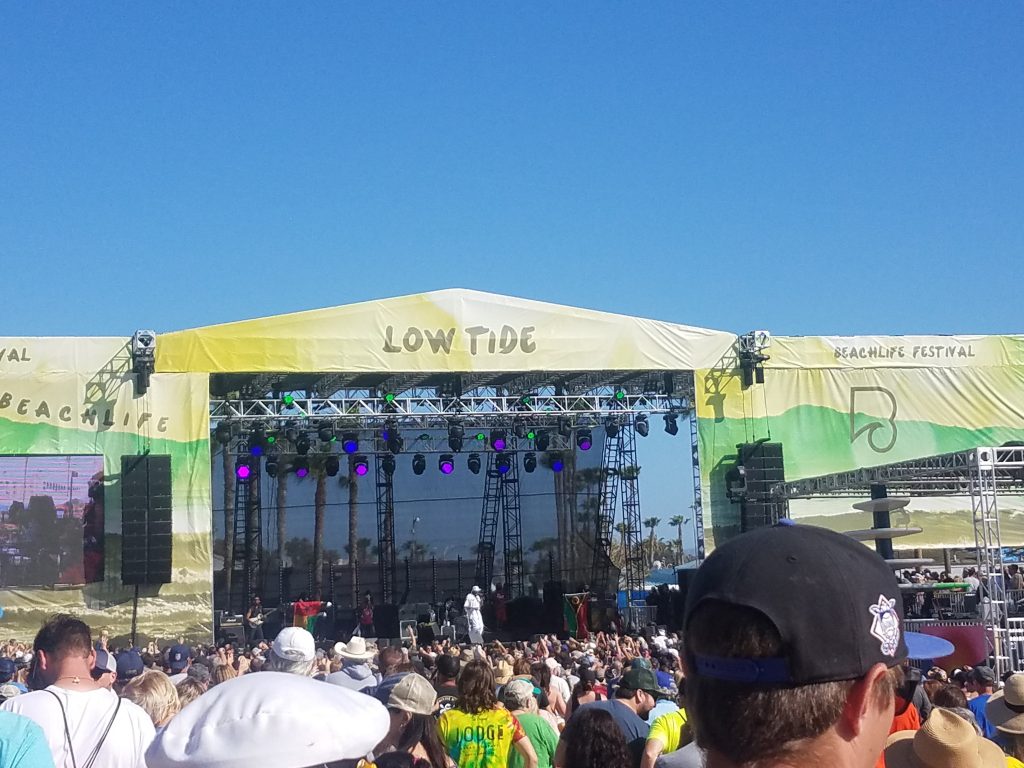 The first day of the inaugural BeachLife festival in Redondo Beach is on the books, and day two is here. If the organizers had any opening day jitters, it didn’t show in the event they put on; the vibe was mellow, there was an eclectic and fun selection of food and other vendors and all three stages ran like clockwork. A healthy but manageable crowd were entertained with sets from several artists including Bob Weir, Steel Pulse, Slightly Stoopid, As the Crow Flies, and Bruce Hornsby; even the lone, obligatory, drug freakout I saw seemed to be having fun making angels in the sand as security gently attended to her. Today’s show will be headlined by the great Brian Wilson, with other artists including Violent Femmes, Chevy Metal (a project featuring Taylor Hawkins of Foo Fighters), Jason Mraz, Everclear, Berlin and others.

The music is the main event at the festival, but there are plenty of interesting diversions as well. The beer selection goes well beyond the usual macro fare, with a selection of over two dozen offerings from local brewery King Harbor and other labels including St. Archer and Baja Brewing. (You can also buy Coors Light if that’s your jam, no judgement here) There are cool vintage shops, art tents, and a variety of businesses and non-profits with booths as well.  The Shit Art Club tent, where you can paint, well, shitty art, was fun, and a special shout out goes to Subaru for filling their tent with a variety of classic arcade and pinball machines set to free play mode.

Bob Weir headlined the main stage on the first night with his new group Wolf Brothers. Don Was proved a sympathetic companion on upright bass, beefing up the trio’s sound. Rootsier acoustic numbers like “Peggy-O,” “Me & Bobby McGee” and “Ripple” came off especially well in that format. They were also joined by members of As the Crow Flies, who played before them, on a charging version of “Not Fade Away.” As the Crow Flies is the latest band from Black Crowes singer Chris Robinson; the group’s set consisted of Crowes songs, and every one in the group had some experience playing with that band. This is the third time and third band with which I’ve seen Robinson, and while the other two were fine, yesterday’s performance was the first one that really clicked for me. The band really sold the riffs on songs like “Remedy” and “Twice as Hard,” at their best combing southern rock soul with Faces-like swagger. Robinson’s was rich and soulful, at times recalling everyone from Wilson Pickett and Otis Redding to Steve Marriott and Rod Stewart.

The beach stage was the place for reggae rhythms, where the South Bay crowd grooved to an hour-long set from Steel Pulse that included classics like “Ku Klux Klan” and “Drug Squad.” Slightly Stoopid’s set was highlighted by Weir’s guest appearance on the Dead’s “Franklin’s Tower” and Tom Petty’s “You Don’t Know How It Feels.”

The highlight of today’s line-up is without a doubt Brian Wilson with fellow Beach Boy alumni Al Jardine and Blondie Chaplin. Brian’s story has been told many times, so suffice it to say that it remains a goosebumps raising experience to see such a musical genius who has overcome so much again taking the stage and delivering those classic songs. Taylor Hawkins’ Chevy Metal should be a fun celebration of Freedom Rock, and Violent Femmes are always worth seeing for the exceptional bass play of Brian Ritchie alone.

BeachLife: buy tickets here or live stream. Previously on The LA Beat: The Beachlife Festival Brings Three Days of Music to the Surf and Sand