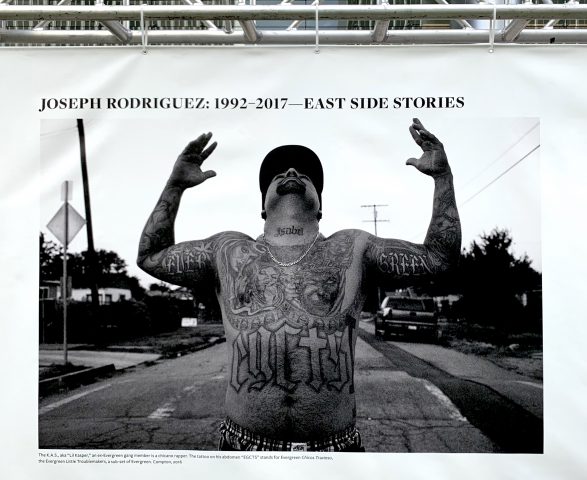 Last weekend I went to Photoville LA, a large free outdoor exhibition that originated in Brooklyn (as Photoville) in 2009, created by United Photo Industries, with mini galleries installed in step-in containers and kiosks, photos presented in cubes and triangles, on banners and in lightboxes, all situated within the grassy grounds of Century City. The Annenberg Space for Photography brought this photo fest to Los Angeles to help celebrate their own 10th year anniversary.

Community organizations such as the Las Fotos Project and Venice Arts were included as were works from major media outlets such the LA Times, New York Times and National Geographic. The many outstanding photo essays from photographers included Pit Bull Flower Power by Sophie Gamand, East Side Stories 1992 – 2017 by Joseph Rodriguez, Lluvia Higuera’s Shaping a Dialogue for Change – A Look Towards the Future in the Present, Underground Chefs of South Central by Oriana Koren, Naomi Harris’ EUSA and so, so many more! Also, over this two-weekend festival there were events, talks, workshops and photo walks.

Due to time constraints, I didn’t get to view the ASP’s current big exhibit “Contact High: A Visual History of Hip-Hop”, but word of mouth is that it’s a great exhibit and I intend to check it out before it ends on August 18.

Annenberg Space for Photography, 2000 Avenue of the Stars, Los Angeles, 90067

I am a native Californian, born and raised in Bakersfield and eventually escaping to San Jose then San Francisco where I spent every free moment in punk and post-punk culture spaces before heading to LA permanently in 1989. I have also spent major time as an AIDS and queer street activist, which today along with my passion for punk/alternative music still informs my personal and social life. I love photography, film and playing punk/post-punk stuff on the bass. My LA Beat contributions are usually photos that give a glimpse into the vibrant art and music scene that makes Los Angeles such an amazing city to live in today.
View all posts by Judy Ornelas Sisneros →
This entry was posted in Art, Attractions, Miscellanious and tagged Annenberg Space for Photography, ASP, Brooklyn, century city, Contact High, Joseph Rodriguez, Las Fotos, Lluvia Higuera, Naomi Harris, Oriana Koren, Photoville, Photoville LA, Sophie Gamand, United Photo Industries, Venice Arts. Bookmark the permalink.