LA Food and Wine Brings the Country’s Best Chefs Together for a Four-Day Feast! 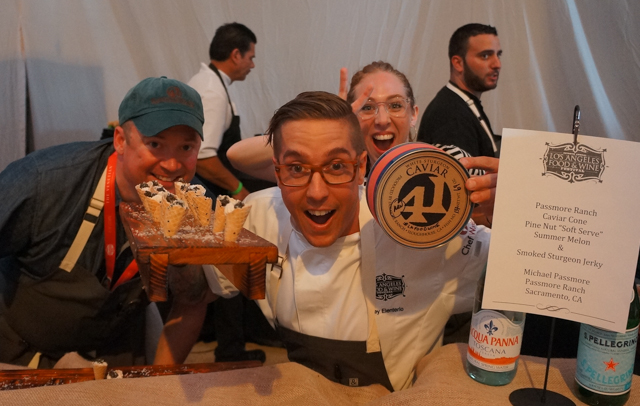 August is always the peak of the Food Event season, and perhaps the biggest event of all is LA Food and Wine’s 4-day culinary extravaganza. On Thursday, August 22, a series of intimate dinners with the theme “Epic Collaborations,” will be taking place at acclaimed restaurants around the city, along with four gigantic strolling food events at Barker Hangar in Santa Monica over the weekend. In previous years the night events took place right on Grand, which shut down the street for a city block. While it was glamorous to party on a red carpet with the city’s lights twinkling in the background, Barker Hangar is much more predictable considering this crazy weather we have been having. They have cut down on the number of events, which used to be a bit overwhelming. The event might not be as red carpet dressy this time, but I’m certain there will still be a proliferation of high-end ingredients from top shelf chefs. Here is a breakdown of some of the most enticing events.

This year’s dinner theme is “Epic Collaborations,” and this mash-up will be one of the event’s most exciting dinners.  As we recently posted, Chef Fullilove’s dining room at the private club is one the best things happening right now in LA., and every year Chef André Bienvenu from the famous Joe’s Stone Crab in Miami is always a big draw at the LAFW events with long lines for his light-as-air tamales or paninis cooked on a contraption made from two irons. This is a rare chance to get into the private club, and also includes a magic show. To make a reservation, contact: Erin Chick – echick@magiccastle.com 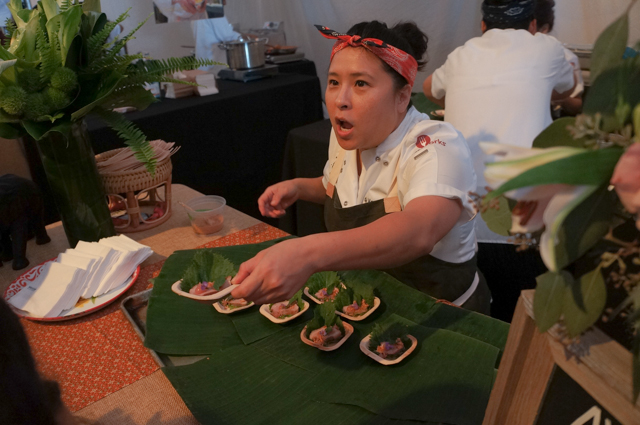 Be sure to snag one of only 28 seats for this communal Filipino-style dining experience. Chef Barb Batiste of Big Boi and B Sweet will be hosting Alvin Cailan of Eggslut, and Royce Burke of Yarrow, a breakfast and lunch cafe on Fairfax Avenue. “A typical kamayan meal features a table covered in smooth, waxy banana leaves, a natural substitute for plates and placemats. Spread along the leaves is typical Filipino fare, including fried fish, shrimp, roasted eggplant, pan-fried bok choy, barbecued chicken and pork skewers, lumpia, longanisa (sweet sausage), and more.”

Right on the heels of opening an outpost of his popular breakfast joint, Eggslut, in London, hometown hero Alvin Cailan will be hosting this strolling event featuring some of the best burgers in town. As host of the YouTube program, The Burger Show, he will be presenting the very first LAFW Golden Burger Show Trophy as judged by a panel of celebrity judges including Seth Rogan, as well as votes from the crowd. Some of our favorite chefs will be flipping patties. Some places are known for their burgers, like Ted Hopson of The Bellwether, Christian Page of Cassell’s Burgers, and Dwayne Fowlks of Uncle Johnny’s Burger. Some chef choices are nontraditional, and we can’t wait to see what Vanda Asapahu of Ayara Thai Cuisine, and Chad Valencia of the Filipino-inspired LASA whip up. Nakul & Arjun Mahendro of Baadmash may seem like an unusual choice, but their lamb burgers have attracted many long lines at food events past. Top Chef contenders Sheldon Simeon of Tin Roof and John Tesar of Knife Steakhouse (Who is also known as Jimmy Sears in Anthony Bourdain’s game-changing best-seller, “Kitchen Confidential”) may have an advantage from all of those televised food challenges.  There will also be plenty of beer, wine and spirits flowing. 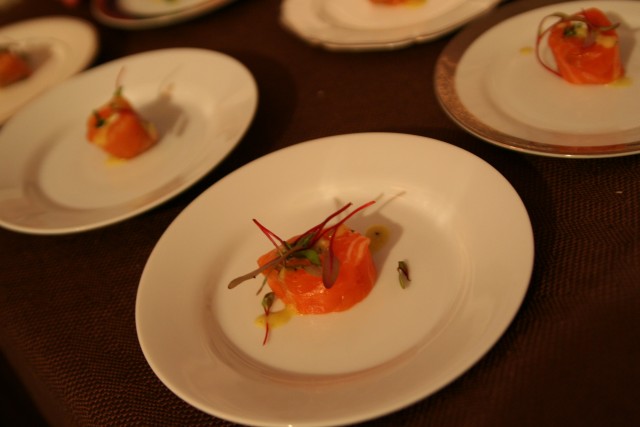 It should come as no surprise that this is our favorite event, and not just because we love Chef Jet Tila. Enjoy LA staples like tacos, donuts, fried chicken and a variety of Asian food from 25 local chefs. We are especially looking forward to specialties from Ian Gresik of
The Arbour, Andrew Gruel of Slapfish (Serving clobster rolls maybe?), Timothy Hollingsworth of Otium, Ted Kim of Seoul Sausage, Esdras Ochoa of Mexicali Taco & Co (Serving their famous Vampiros maybe?), Thomas Ortega of Amor Y Tacos, Yoya Takahashi of UMI by Hamasaku, and Bret Thompson of Pez Cantina (Dare we hope for ceviche?). Plus unlimited wine, beer, etcetera. $150 General Admission, VIP $195 with early entry.

With LA’s year-round sunshine, we are all about barbecues, or specifically, grilling. To celebrate summer, LAFW is gathering 25 of the best bbq masters from around the country. The strolling event will be hosted by Chef Curtis Stone of Gwen Butcher Shop & Restaurant. And what is best on the bbq? Texans love their brisket and Memphis is all about pork. Angelenos are always happy to see a big juicy steak on the grill. There will also be surf ‘n’ turf, sides and desserts to accompany this carnivorous feast. As is traditional for LAFW’s Saturday night event, high end ingredients like foie gras, caviar and oysters are expected. You can match your bites with endless wine pours, including some nice cabs and pinot noir.

Saturday night brings out the big guns, like André Bienvenu of Joe’s Stone Crab in Miami, who always draws a crowd, Miami, Michael Ginor, who makes me so excited and not at all guilty with his humanely raised Hudson Valley Foie Gras, Kyle Johnson, whose Bourbon Steak in Glendale, whose burgers and steaks have changed everyone’s minds about restaurants attached to a mall. Also plating will be my South Bay locals, David LeFevre of The Arthur J and Tin Vuong from Little Sister. Last but not least, Sammy Monsour will bring his upscale Cajun and creole cuisine from Preux & Proper downtown, and we are excited to see Steve Samson of the much-lauded Rossoblu.

LAFW finishing up the week with what they promise will be LA’s largest Brunch Buffet EVER. San Francisco’s legendary Chef Jeremiah Tower will be hosting the event, pouring champagne and dishing out caviar to start the day out with glamour and excess.

Participating chefs cover the gamut from high-end restaurants to bakeries, and reflect the international flavors of Los Angeles. Chefs include Dominique Ansel, inventor of The Cronut, from 189 by Dominique Ansel, Burt Bakman of SLAB Barbecue, the ever-charming queen of Filipino food, Barb Batiste of B Sweet Dessert Bar & Big Boi, Matthew Beaudin of Monterey Bay Aquarium, who is sure to do something exciting, Robert Flaherty of the English-style gastropub, The Pikey, Michael Ginor of the humane Hudson Valley Foie Gras, Lydia & Leo Lee from RiceBox, Nicholas Loncar of Avec Nous in Beverly Hills, Mitzi Reyes of The Bazaar by Jose Andres, (Come onnn, Philly Steak!) and Bret Thompson from longtime favorite Pez Cantina.

Events on Friday, Saturday, and Sunday all take place at the Barker Hangar at Santa Monica Airport. Follow the links in the event titles for tickets and more information. 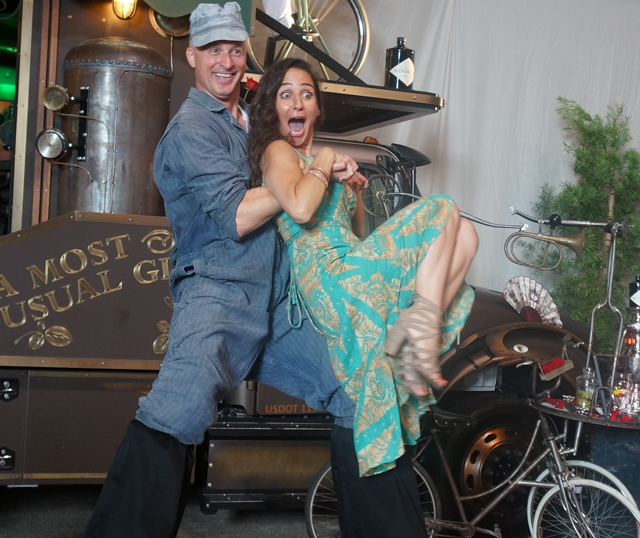 The acrobats at Hendrick’s Gin take one patron for a spin at LAFW.