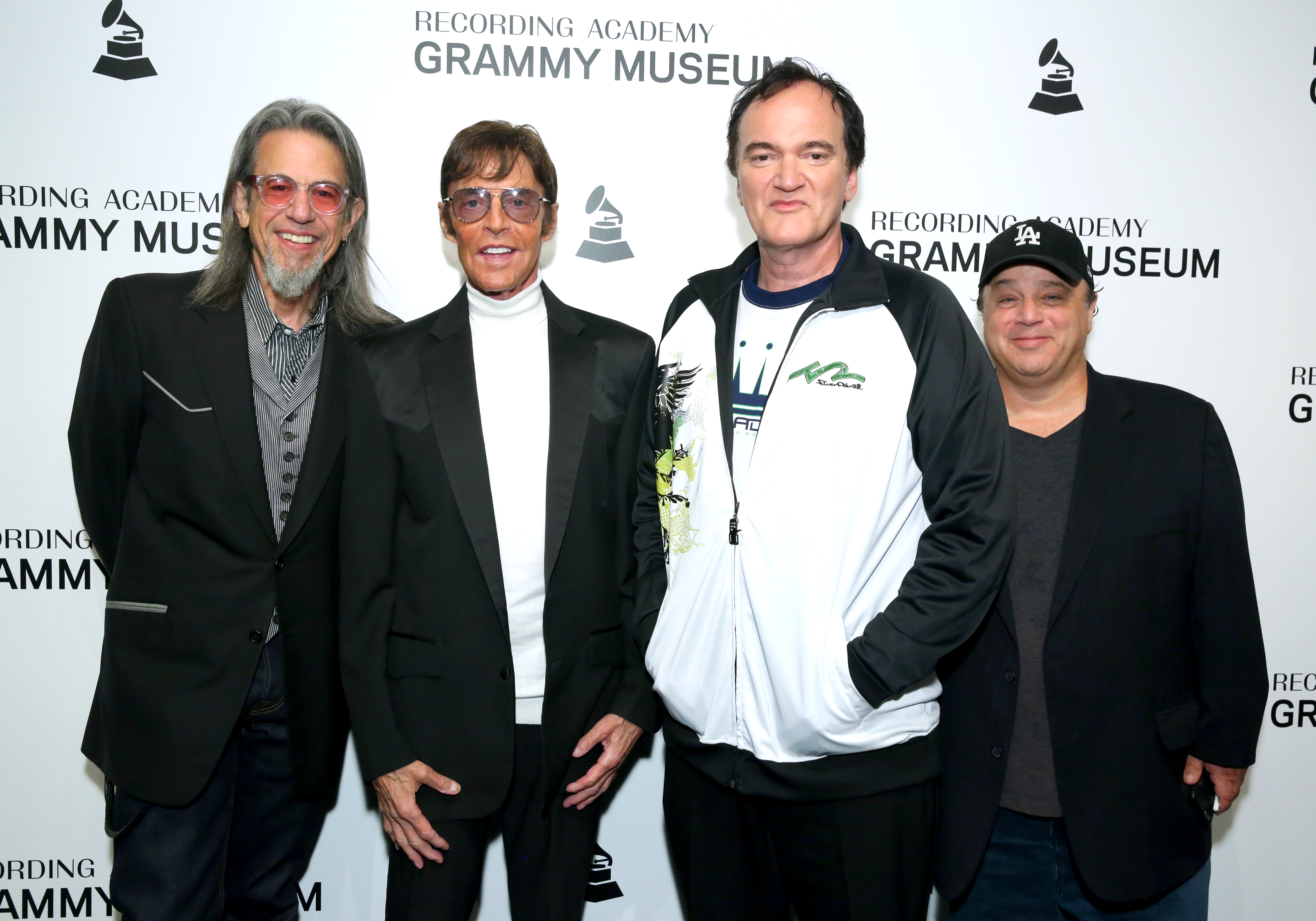 Last Wednesday night, the GRAMMY Museum welcomed Quentin Tarantino to discuss his music selection process for his movies, particularly his recent film, “Once Upon a Time in Hollywood.” He was interviewed briefly by GRAMMY Museum moderator Scott Goldman, who then turned the discussion over to music writer and critic David Wild.

Just like he is in televised interviews, Tarantino is extremely, somewhat humorously, confident. His brain works too fast for his mouth to keep up, so he often verbally grasps for the right word before letting loose another machine gun fire of information. Later, when Mark Lindsay, the vocalist of Paul Revere and the Raiders joins him onstage, Tarantino is visibly more comfortable and his answers become more thought-out and succinct. Tarantino generously shares the spotlight, except for one time when he starts recounting something about Mark, who teasingly takes the piss out of Tarantino, asking, “Do YOU want to tell the story?”

The interview started out with questions about the first albums Tarantino ever bought (George Carlin and the Superfly soundtrack), and his process of choosing songs. He has a record collection that looks like a record store, and he looks for songs right from the beginning of the concept and even while he is on set. For” Once Upon a Time in Hollywood,” he had some archivists dig up 14 hours of 93 KHJ on the air, and some of the songs, as well as the ads and radio patter in the movie, came from those tapes. Tarantino has also collected movie soundtracks since he was a kid, so he uses bits of them sometimes. There was a lot of talk about the history of radio in Los Angeles and the music of the late 60s, especially the more obscure bands from the latest soundtrack.

Later, Mark Lindsay of Paul Revere and the Raiders joins Tarantino onstage. He has a warm, low, velvety voice, which would be a perfect disc jockey voice. He is extremely likeable and interesting. There is more talk of radio and obscure 60s bands. Lindsay makes a point that their albums were mixed for AM radio and they were only mixed for LPs as an afterthought. He makes the occasional drug or hippie joke, and the room either doesn’t get them, or chooses to ignore them. He occasionally says something like, “I have a story about Abigail Folger, but I can’t tell it right now because it’s too long,” and I was thinking, “Get this man his own show!”

Things that blew my mind:

Tarantino says that he would have liked to put the Carrie Nations from “Beyond the Valley of Dolls” in the movie as if they were an actual band playing on the radio in order to cue people that this was an alternate reality. He mentions “In the Long Run,” a Carrie Nations song covered by Redd Kross. I was the only one in the audience who seemed to recognize the reference.

One of my favorite cult movies is “Shogun Assassin,” an amalgam of three Japanese “Babycart” movies. It turns out that Mark Lindsay did the theramin soundtrack! And again, no one seemed to know what they are talking about! How did you people become Tarantino fans without cutting your teeth on these weird movies like I did? Then I remember Video Archives, my local video store that had an amazing Cult section. The same video store where Tarantino used to work. Oh. That’s why I have seen all of these movies.

Most people who know the Manson story know that music producer Terry Melcher lived in the Cielo Drive murder house prior to Sharon Tate. And even though Manson knew Melcher didn’t live there anymore, it’s the reason he chose that house. Some people also know that Terry Melcher produced Paul Revere and the Raiders. What they might not know, and what I didn’t know, is that Mark Lindsay, who was sitting right there in front of us, was Terry Melcher’s room-mate in the Cielo Drive house and had even met Manson at that house a couple of times!

Lindsay and Terry Melcher wrote a lot of the Paul Revere and the Raiders songs together on a piano in the Cielo Drive house, which remained there through several tenants, including Roman Polanski and Sharon Tate. On the morning the murders were discovered, the sheet music for “Straight Shooter” was on the piano. It is believed that Abigail Folger had been playing it. It turns out that Lindsay and Melcher once had John Phillips of the Mamas and the Papas visiting, and had asked him for some of his sheet music. He gave them “Straight Shooter,” from their newest album. After messing around a little on the piano, they put the sheet music in the piano bench, where it stayed until Sharon Tate moved in. Mark mentioned, “…and that’s the piano that you used in the movie. It’s the real piano…Do you OWN that piano?”

“No, no no, but in the movie you see Abigail Folger play the piano, playing “Straight Shooter,” which was on the piano. “…What songs did you write on that piano?”

Mark corrects him, “Is it you or is it me? and jokes “Which IS it?”

After the interview, Mark Lindsay performed the three Paul Revere and the Raiders songs that are on the soundtrack–“Hungry,” “Good Thing” and “Mr. Sun, Mr Moon”–with a choir from Tesoro High School, and it was fantastic!!! I forgot how much I loved those songs! Lindsay is not only a good singer, but his growls, hisses and screams are gorgeous and sexy.

If this had been an infomercial for the movie soundtrack, I would have been on the phone already. Lindsay called the album, which includes several of the retro commercials and DJ breaks from the film, “Great driving music.” I haven’t had the chance to roll down the windows and crank this soundtrack while speeding along the Coast Highway yet, but I can’t wait for the opportunity. 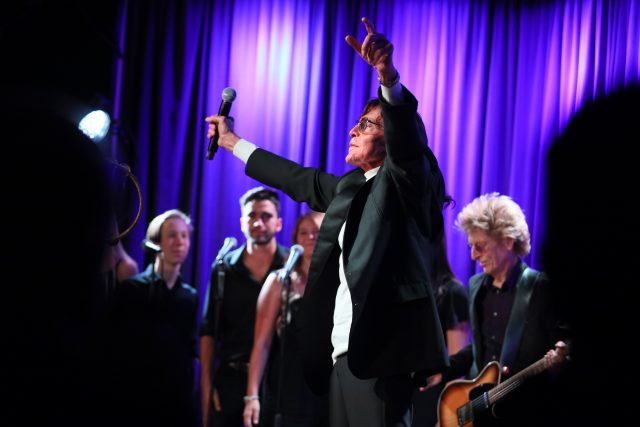 Mark Lindsay and the Tesoro High School choral ensemble perform at Once Upon A Time In Hollywood: An Evening With Quentin Tarantino and Friends at the GRAMMY Museum on October 02, 2019 in Los Angeles, California. (Photo by Rebecca Sapp/Getty Images for The Recording Academy )

Previously on The LA Beat:

Why You Need to See Once Upon a Time in Hollywood, Especially if You Don’t Want To

Quentin Tarantino is Getting Mighty Tired of us Following him Around

For your edification, The Carrie Nations:

Born and raised in the great city of Los Angeles, this food, culture and music-loving punk rock angeleno wants to turn you on to all that is funky, delicious and weird in the city. While Elise holds down the fort, her adventurous alter ego Kiki Maraschino is known to roam the country in search of catfish.
View all posts by Elise Thompson →
This entry was posted in Movies, Music. Bookmark the permalink.