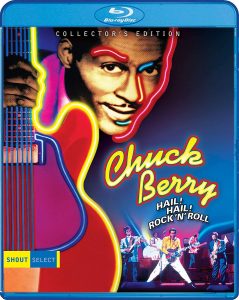 “Chuck Berry: Hail! Hail! Rock ‘n’ Roll” (1987, Shout! Select) Keith Richards attempts to corral a mercurial Chuck Berry into celebrating his own 60th birthday at an all-star concert featuring Eric Clapton, Robert Cray and Etta James, backed by Chuck’s longtime collaborator Johnnie Johnson, Steve Jordan, Chuck Leavell, Joey Spampinato (NRBQ) and Bobby Keys. The birthday performances are mostly solid – though Etta James wipes the floor with everyone – and the interviews with many of Chuck’s contemporaries (Little Richard and Bo Diddley) and admirers (Richards, of course, but also Bruce Springsteen, who details the surreal challenges of serving as his pickup band) underscore his foundational importance in the history of rock and roll. You won’t get much from Chuck, though: he shuts down any conversation about personal issues (like his marriage and stint in jail), and keeps mostly mum about the business of rock and roll, save that more people made money playing Chuck Berry’s music than he did. Most likely, you won’t come away knowing more about him than you did when you started the film, but director Taylor Hackford fills in the gaps with great concert footage and nearly four hours of additional interviews with Jerry Lee Lewis, Sam Phillips, Roy Orbison and others. Shout! Select’s two-disc Blu-ray includes an hour of concert rehearsals, a chat with Chuck and Robbie Robertson of the Band, and an interview with Hackford about working with Berry (it wasn’t easy). 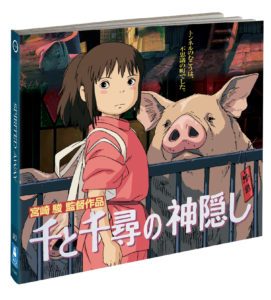 “Spirited Away” (2001, Shout! Factory/GKids) When her parents are transformed into pigs after eating enchanted food, 10-year-old Chihiro must navigate a world of monsters, ghosts and witches in order to save them and (more importantly) her own name. Oscar-winning, record-breaking animated feature from Hayao Miyazaki – and arguably, his best – can be enjoyed for the pure aesthetics of its miraculous art and character designs (with the melancholy and silent No-Face among the best of the latter), as an exciting fantasy-adventure for tween/teen viewers (very young kids might find the monster parade alarming), and as a phantasmagoric but still thoughtful parable about the pain (and rewards) of leaving childhood and its inherent fantasies behind. Shout! Factory and Gkids’ lavish Blu-ray includes both the original Japanese language track and the English dub (which features the voices of Michael Chiklis and Suzanne Pleshette, among others), as well as storyboards for the entire film, the original soundtrack by Joe Hisaishi, and essays by Kenneth Turan and Miyazaka himself. 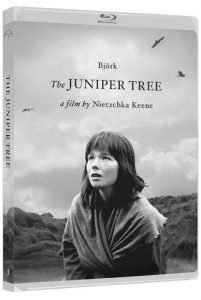 “The Juniper Tree” (1990, Arbelos Film) Having fled their home after their mother is executed for alleged witchcraft, two medieval-era Icelandic sisters (Bryndis Petra Bragadottir and a pre-fame Björk) find solace with a widower and his son, but soon discover that old superstitions die hard. Newly restored Blu-ray presentation of this feature debut by writer/director/editor Nietzchka Keene is well-timed, given the recent interest in “folk horror,” but the film – shot in starkly gorgeous black-and-white with an Icelandic cast speaking English – also works as a sobering look at male fear/anger at female unity and power, and as an impressive showcase for Björk’s nascent talents. Arbelos’ disc includes a vintage interview with Keene (who died in 2004) and three of her short films, as well as a new interview with cinematographer Randy Sellars, outtakes and liner notes. 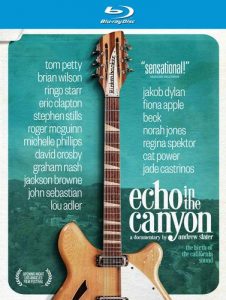 “Echo in the Canyon” (2019, Greenwich Entertainment) A host of musical talent is brought together by Jakob Dylan and director/ex-Capitol CEO Andrew Slater to understand why the Laurel Canyon scene of the mid-to-late-’60s holds such a vaunted position in the music annals. Testimony from those who were there – Eric Clapton, Ringo Starr, Brian Wilson, an irascible David Crosby, Michelle Phillips, and Lou Adler – and those who followed (Jackson Browne, Tom Petty), as well as plenty of vintage A/V clips lend credence to the idea of the Canyon as a once-in-a-lifetime hothouse that yielded remarkable blends of poetry and pop; newer footage featuring Dylan, Beck and Norah Jones musing and singing these songs is less compelling and feels, at times, indulgent. No extras on the Blu-ray. 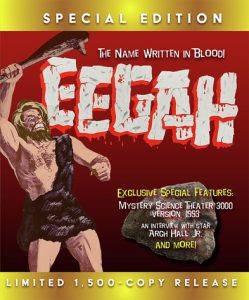 “Eegah” (1962, The Film Detective) Teenage rocker Arch Hall, Jr., joins girlfriend Marilyn Manning and her dad (Hall’s father, Arch Hall, Sr., who also co-wrote and directed the film) in the search for a caveman (Richard Kiel) living in the California desert. Low-budget creature feature, elevated to sainted status among cult/bad film fans by “Mystery Science Theater 3000,” is inept and awkward (Eegah’s manhandling of Manning is decidedly icky) but never dull, thanks to Hall Sr. and co-writer Bob Wehling’s barrage of monster kid/drive-in friendly elements, including three (perfectly okay) pop songs by Hall and his band (which includes future Motown writer-producer Deke Richards), dune buggy action, a party at the Ocotillo Lodge in Palm Springs (where Ray Dennis Steckler – also the film’s assistant cameraman – gets tossed in the pool), a visit to Bronson Caverns and reams of goony but eminently quotable dialogue (“Watch out for snakes!“). The Film Detective’s limited edition Blu-ray includes a 4K restoration (!) and interviews with Arch Jr. and Joel Hodgson, as well as the “MST3K” episode devoted to “Eegah.” 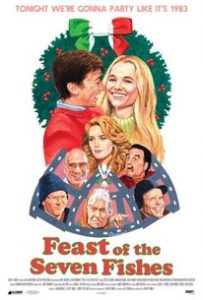 “Feast of the Seven Fishes” (2019, Shout! Factory) Christmas-themed culture clash comedy with aspiring painter Skyler Gisondo bringing WASPy blonde Madison Iseman to the titular celebration at the home of his big, loud Italian-American family. Much of this will plays as overly familiar, but writer-director Robert Tinnell – who adapts his own Eisner-nominated graphic novel – invests the material with legitimate warmth and humor, much of which is aided by the charming leads (and Addison Timlin as Giosondo’s heartbroken and determined ex) and a supporting cast of vets, including Joe Pantoliano, Paul Ben-Victor, Ray Abruzzo and Lynn Cohen, all of whom understand that underplaying is the key to selling sentimental holiday material. “Feast” is currently in limited release at theaters across the country, including the Laemmle Music Hall, and on demand.

Paul Gaita lives in Sherman Oaks, California with his lovely wife and daughter. He has written for The Los Angeles Times, LA Weekly, Variety and The Fix, among many other publications, and was a home video reviewer for Amazon.com from 1998 to 2014. He has interviewed countless entertainment figures from both the A and Z lists, but his favorites remain Elmore Leonard, Ray Bradbury and George Newall, who created both Schoolhouse Rock and the Hai Karate aftershave commercials. He once shared a Thanksgiving dinner with celebrity astrologer Joyce Jillson, and regrettably, still owes the late character actor Charles Napier a dollar.
View all posts by Paul Gaita →
This entry was posted in Movies, Music and tagged Arbelos Films, GKids, Greenwich Entertainment, shout factory, Shout Select, The Film Detective. Bookmark the permalink.