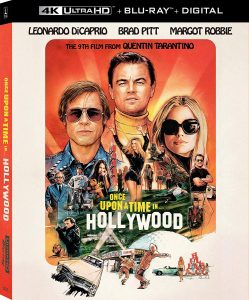 “Once Upon a Time in… Hollywood” (2019, Sony Pictures Home Entertainment) Everything you really need to know about Quentin Tarantino‘s reality-bending Hollywood drama can be found here in Elise’s write-up, so I will simply add: the Bruce Lee scene and the much-discussed ending are more jarring than cathartic, and Margot Robbie doesn’t have a lot to do as Sharon Tate, but as a synthesis of Tarantino’s cultural obsessions and his unique perspective as a filmmaker, it’s a far more accomplished and mature work, and holds up better to repeat viewings, than “Pulp Fiction.” And in terms of aesthetic, from production design to soundtrack and casting, it’s as audacious and inspired as “The Irishman” – maybe even more so. Sony’s Blu-ray includes seven deleted scenes (more Manson, more “Lancer” and “Hullaballoo“) and a wealth of making-of featurettes. 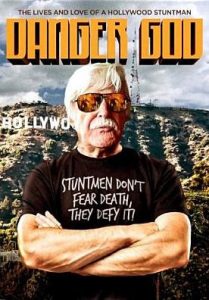 Also: the real-life inspiration for Brad Pitt’s laconic stuntman, Cliff Booth, in “Once Upon a Time,” is Gary Kent, who caught numerous bullets and fists as a stunt performer and actor in numerous low-budget films from the 1960s to the present, including Peter Bogdanovich‘s “Targets,” Monte Hellman‘s “The Shooting” and Don Coscarellli‘s “Bubba Ho-Tep.” Kent is the focus of Joe O’Connell’s affectionate documentary called “Danger God” (2018, Wild Eye Releasing), which details his rough-and-tumble life and career, including filming at Spahn Ranch with Al Adamson, where he encountered Manson and The Family. Friends and collaborators, including Hellman and “Stunt Man” director Richard Rush, also testify warmly about Kent’s personal and professional durability. 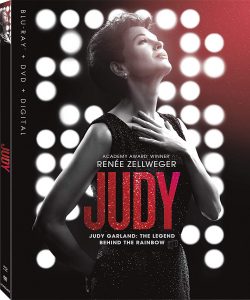 “Judy” (2019, Lionsgate Home Entertainment) Renee Zellweger plays Judy Garland at the low ebb of her career, performing at a London nightclub in 1968 to keep herself financially and emotionally afloat. The latter two are challenged by substance abuse issues and flashbacks to her abusive tenure at MGM as a teenager, while lifelines surface in the form of scheming fifth husband Mickey Deans (Finn Wittrock) and handler Jessie Buckley. Zellweger’s performance smoothes over the flaws in Rupert Goold‘s adaptation of the Olivier-nominated play “End of the Rainbow”; her full-body commitment to Garland’s twin personas – do-or-die on stage and fragile and need off – isn’t reflected in Tom Edge‘s script, which underfeeds the other characters and rests too often on screen biopic tropes. Lionsgate’s DVD/Blu-ray set includes a making-of doc featuring cast and crew. 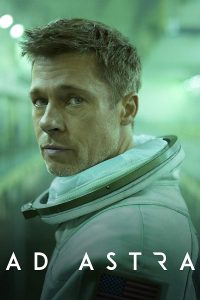 “Ad Astra” (2019, 20th Century Fox Home Entertainment) Power surges from space wreak havoc on Earth and require emotionally ossified astronaut Brad Pitt to head to Mars and determine if his long-lost father (Tommy Lee Jones), the head of a decades-old exploration into extraterrestrial life, is behind the incidents. Sci-fi for grown-ups from director/co-writer James Gray, who crafts a gorgeous, exciting (at least, in its first half) and believable vision of space (with considerable assist from cinematographer Hoyte van Hoytema) and gives Brad Pitt much quiet gravitas (delivered in voice-over) to chew on as the phlegmatic spaceman. But “Ad Astra” also aims for larger, more philosophical terrain to match the scope of its vision; unfortunately, they aren’t very clearly laid out and appear to boil down to father and son issues, which aren’t very compelling, even if delivered by Jones and Pitt. Fox’s Blu-ray includes multiple making-of docs and commentary by Gray for the film and deleted scenes. 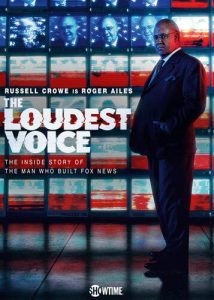 “The Loudest Voice” (2019, CBS DVD/Showtime Entertainment) Russell Crowe, buried under layers of corpulent makeup, plays the late Fox News chief Roger Ailes as a human wrecking ball in this seven-part miniseries from Showtime and writer/co-producer Tom McCarthy (“Spotlight”). Ailes’ rise to power, and the human detritus left in his wake as Fox became the fact-adverse juggernaut and ultra-conservative soap box it is today, is detailed in no-holds-barred language and volcanic temper by Crowe; why he became such a blunt force object, and how he was undone by harassment charges by anchor Gretchen Carlson (Naomi Watts), unfold in a by-the-books manner (or in the case of the former, pop psychologizing) that despite the ghastliness of Ailes’ behavior, never quite match the scenes focused solely on him in terms of energy or scripting. Watts and the supporting cast, which includes Sienna Miller as Ailes’ wife and Seth MacFarlane as Fox PR flak Brian Lewis, are left to largely swim in Crowe’s colossal wake; the three-disc CBS DVD includes a making-of do 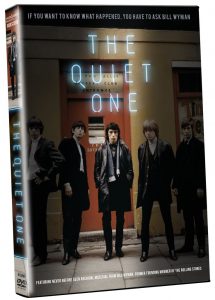 “The Quiet One” (2019, Sundance Selects/MPI) Bill Wyman, the former Rolling Stones bassist, doesn’t even appear on screen until the final third of this documentary, preferring instead to let his vast collection of photographs, film and memorabilia do the talking. His physical absence from but invaluable contribution to the film is a succinct metaphor for his role in the Stones, which was to serve as supple but rocksteady counterpart to drummer Charlie Watts (the only member of the band featured in a new interview) without ever drawing direct attention. One wishes that director Oliver Murray dug deeper with his subject, but Wyman’s distance is most likely the only way he prefers to approach his past, so as the song goes, you may not get what you want, but you get what Wyman needs.

Paul Gaita lives in Sherman Oaks, California with his lovely wife and daughter. He has written for The Los Angeles Times, LA Weekly, Variety and The Fix, among many other publications, and was a home video reviewer for Amazon.com from 1998 to 2014. He has interviewed countless entertainment figures from both the A and Z lists, but his favorites remain Elmore Leonard, Ray Bradbury and George Newall, who created both Schoolhouse Rock and the Hai Karate aftershave commercials. He once shared a Thanksgiving dinner with celebrity astrologer Joyce Jillson, and regrettably, still owes the late character actor Charles Napier a dollar.
View all posts by Paul Gaita →
This entry was posted in Interviews, Movies, Music, Television and tagged 20th Century Fox Home Entertainment, CBS DVD, Lionsgate Home Entertainment, MPI, Showtime Entertainment, Sony Pictures Home Entertainment, Sundance Selects, Wild Eye Releasing. Bookmark the permalink.

One Response to Movies Till Dawn: More New and Notable (Award Bait Edition)