Movies Till Dawn: Secret Rites of the Saturday Morning Strange 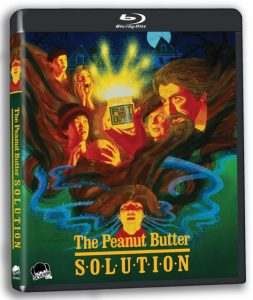 “The Peanut Butter Solution” (Severin Kids, 1985) A chance encounter with wo ghosts renders young Michael Mackay completely bald; the same said spirits attempt to rectify the situation with magical glop, comprised largely of peanut butter, which causes him to then sprout impossibly long and decidedly sentient follicles. North Americans of a certain age may remember being baffled or terrified as kids by this bizarre children’s film from Canada, which aired regularly on cable on both sides of the 49th parallel in the 1980s and ’90s; though intended as a paean to the power of imagination, and well acted by its young cast, a combination of lysergic visuals (a strict teacher operates a sweat shop that uses child labor and Mackay’s hair to create magic paintbrushes), alarming ghosts (who burned to death in a fire!), J-horror-styled living hair and some eyebrow-raising moments (like when Mackay’s pal, Siluck Saysanasy of “Degrassi” fame, decides to apply the peanut butter) render “Solution” as a unbalanced cousin to such iconoclastic kids’ fare as “Matilda,” “The Witches” and “The 5,000 Fingers of Dr. T.” The Blu-ray, from Severin’s kid-movie imprint, is chock full of extras, including commentary by Mackay and producer Rock Demers, an interview with Saysanasay and always-welcome observations by Paul Corupe of Canuxploitation.com. 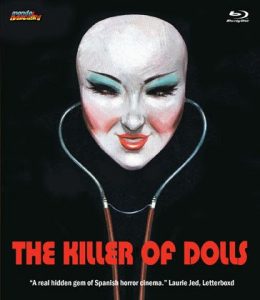 “Killer of Dolls” (1974, Mondo Macabro) Drummed out of medical school for an aversion to blood, high-strung David Rocha returns home to indulge in his favorite pastime – conducting faux surgical experiments on toy dolls – while fending off the advances of his family’s employer (Helga Line), on whose estate a killer in a doll’s mask is stalking couples in flagrante delicto. Overripe Spanish-made take on the giallo by actor Miguel Madrid/Michael Skaife delivers many of the same tropes/obsessions as its Italian primo – multiple red herrings, grisly murders, Freudian motivations run amuck – but subverts a major tenet of the subgenre by focusing its most voyeuristic moments on the frequently bare torso of Rocha, whose performance can be politely described as unhinged. The fuzzy-freaky score by Alfonso Santisteban is also a highlight; Mondo’s Blu-ray offers a digitally restored 4k transfer and interviews with a still eccentric Rocha and Spanish film historian Dr. Antonio Lazaro-Rebell; two commentaries, by historians Kat Ellinger and Robert Monell and Rod Barnett (of the swell NaschyCast) cover the giallo and Spanish horror connections. 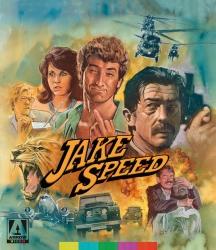 “Jake Speed” (1986, Arrow Video) When her sister is kidnapped by a white slavery ring, Karen Kopins discovers that her grandfather’s suggestion for a rescuer – Jake Speed, the hero of World War II-era pulp adventure novels – appears to be not only real, but also happy to take on bad guy John Hurt in order to generate material for a new book. A cable mainstay during the 1980s and beyond, this indie actioner – filmed in part in Van Nuys – tried to tap into the same vein of nostalgia for all-American serial-styled thrills as “Raiders of the Lost Ark” and “Romancing the Stone”; unfortunately, co-producer/writer Wayne Crawford, a veteran of Florida-made exploitation and indie films who cast himself as Jake, is a enthusiastic but less than electrifying presence (he and co-writer/director Andrew Lane were better served as the producers of “Valley Girl“), and the picture wanders too often into goony comedy (or over-the-top violence) to maintain consistent interest. Still, junkfood film fans who don’t mind the lapses in logic and pace may appreciate the excessive boom and bang, as well as the great Dennis Christopher as Jake’s sidekick and; Arrow’s Blu-ray includes interviews with Lane and co-producer William Fay (“The Hangover”). 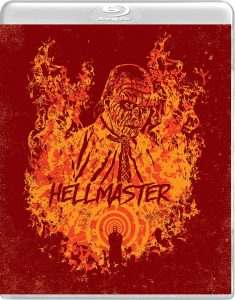 “Hellmaster” (1992, Vinegar Syndrome) A firm believer in the “If At First You Don’t Succeed” principle, mad scientist John Saxon decides to revive his experiments in mental telepathy – which previously transformed its test subjects into psychotic zombies – and culls a new set of unwilling guinea pigs from the student body at (fictitious) Kant University. Lensed in Detroit, Michigan and originally issued as “Them,” this horror/sci-fi hybrid suffers from an overcomplicated plot, hastily inserted new material and an abundance of loose plot threads, all apparent victims of a substantial re-organization into its current form; having said that, “Hellmaster” also boasts a full-bore performance by Saxon (and a more measured one by David Emge of the ’78 “Dawn of the Dead” as his opponent), a reasonable attempt at original monster make-up (though bearing the influence of “Hellraiser”) and impressive visuals by cinematographer Michael Goi (“American Horror Story,” “Chilling Adventures of Sabrina”). Goi is featured in an interview on Vinegar Syndrome’s Blu-ray/DVD set, which also includes both “Hellmaster” and “Them” (director Douglas Schulze provides commentary for both versions), and galleries of (ambitious) conceptual art and production stills. 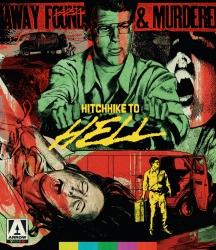 “Hitchhike to Hell” (1977, Arrow Video) Bespectacled Howard (Robert Gribben) cruises the sun-baked streets of Crescent City, California (actually Sherman Oaks and surrounding areas), ostensibly to deliver dry cleaning, but more often than not, to murder female hitchhikers, especially those who confess to fractured relationships with their mothers. Low-budget exploitation, apparently inspired by the real-life Santa Rosa hitchhiker murders in 1972 and 1973, from director Irvin Berwick (“The Monster from Piedras Blancas”) isn’t particularly sleazy or suspenseful, and instead plays like an extended meditation/temporal loop on the perils of traveling in the San Fernando Valley, as Howard repeats the same grisly ritual (pick-up/freakout/murder) with a ceaseless stream of thumbtrippers before calming his nerves with root beer and model airplanes; these moments are interspersed with stern lectures on the dangers of hitchhiking by police lieutenant Russell Johnson (“Gilligan’s Island”) and cartoonishly awful parental behavior. Arrow’s Blu-ray includes dissertations on Berwick’s bizarre career (which reportedly encompassed everything from educational films to adults-only material) by Stephen Thrower and on hitchhiking in the movies by Alexandra Heller-Nicholas; two versions of the theme song and an interview by its singer/writer, Nancy Adams, are also included.

Paul Gaita lives in Sherman Oaks, California with his lovely wife and daughter. He has written for The Los Angeles Times, LA Weekly, Variety and The Fix, among many other publications, and was a home video reviewer for Amazon.com from 1998 to 2014. He has interviewed countless entertainment figures from both the A and Z lists, but his favorites remain Elmore Leonard, Ray Bradbury and George Newall, who created both Schoolhouse Rock and the Hai Karate aftershave commercials. He once shared a Thanksgiving dinner with celebrity astrologer Joyce Jillson, and regrettably, still owes the late character actor Charles Napier a dollar.
View all posts by Paul Gaita →
This entry was posted in Movies and tagged Arrow Video, Mondo Macabro, Santa Rosa, Severin, Severin Kids, sherman oaks, Van Nuys, VInegar Syndrome. Bookmark the permalink.

One Response to Movies Till Dawn: Secret Rites of the Saturday Morning Strange