A Meteor Shower Worth Staying up for Tonight! 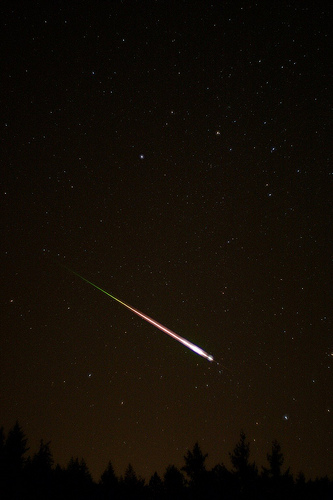 Early tomorrow morning, the Quadrantid meteor shower will coincide with an early setting of the moon to make what could be quite a spectacle. The peak of the shower will be at 2am-2:30am, while the moon will be setting at 3am.

Normally meteor showers are at their best between 10pm and 2am. Imagine the earth is a car, and that the meteors are bugs hitting its windshield. Whichever part of the earth is facing front is going to have the most meteors.

Where should you look? First, locate the big dipper (Ursa Major). Follow the arc of the “handle”. One mnemonic device for astronomers is “Arc to Arcturus.” The arc of the “handle” will point directly at a bright star (Arcturus). The Quadrantids will be emanating from a spot just below that arc, closer to the big dipper. According to an article in Space.com, “Quadrantids are notoriously unpredictable, but if any year promises a fine display, this could be it.”

Born and raised in the great city of Los Angeles, this food, culture and music-loving punk rock angeleno wants to turn you on to all that is funky, delicious and weird in the city. While Elise holds down the fort, her adventurous alter ego Kiki Maraschino is known to roam the country in search of catfish.
View all posts by Elise Thompson →
This entry was posted in Science & Technology, Upcoming Events and tagged Meteor shower. Bookmark the permalink.