“ We’ve finally entered the Twilight Zone” says Marky Ramone, the lone surviving member of the iconic Rock and Roll group The Ramones. “I’m so glad that somebody has drummed up this new idea. I’ve been signing autographs forever, but I never imagined such a cool concept. This is the special sauce that this industry has been waiting for.” 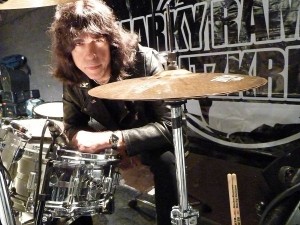 Having trouble finding the perfect Christmas gift for yourself or that hard to please collector of Rock memorabilia? How about a drum head doodled on and autographed by the legendary drummer of The Ramones …with a personalized video as proof of authenticity? Doesn’t float your boat? No problem. Maybe that choosey collector would like a limited edition, original artwork print, drum sticks or even a jar of Marky Ramone’s ‘Brooklyn’s Own Marinara Pasta Sauce?’ Best of all, you can actually watch him live online, as he talks to you during the signing; all this without you actually having to be there!

For the first time ever, you can acquire autographed collectibles directly from the artist as if you were there. You can meet them, greet them, and watch them sign official limited edition rock ‘n’ roll memorabilia from any internet – connected device. Marky Ramone, legendary drummer for the seminal punk rock band The Ramones, will be the first artist in any genre of the arts to do it, and the prospect of making internet history has him grinning like the proverbial cat who ate the canary.

Marky will become the first rock star to partake in an Interactive Meet And Greet Entertainment (IMAGE) experience for fans all over the world – one at a time – with his Online Autograph Meet & Greet Event on Friday, Nov. 23 at 3 p.m. PST.

During this unique event, Marky will give each fan a face to face experience that will be captured for history…and they won’t have to wait in line at a store or brave the elements as it will be online at www.MarkyRamone.com.

*UPDATE: Yesterday, on a bustling Wednesday afternoon in Brooklyn, as he and his family were busy preparing for today’s Thanksgiving holiday festivities, Marky graciously took the time to share his thoughts on this exciting new technology with The LA Beat:

Marky, as the very first artist in any genre of the Arts to use this new technology to interact with your fans, are you excited about the prospect of making internet history using IMAGE?

It’s unbelievable! I can’t believe how the technology just gets more and more into the future! I like it because it stops forgery, and people can see you signing whatever they want to get. Recently, there’s been so much forgery over the last few years and this really is a preventative measure.

Also, if you’re in another state or another country then (using IMAGE) you can get the autograph through the internet and whatever item I sign it’s immediately sent to them.

Marky, how did you come to hear about IMAGE?

Well, the owner – the guy with the concept – (Gary Sohmers) came to calling my manager, and he got in touch with me about it and it seemed very interesting. So he explained it to me. I was away for a month in South America. touring. I just got back about 5 – 6 days ago. So now I’m absorbing the whole thing, because when Sandy the storm hit here that was the first thing on my mind: concern for my family and friends. Now that they’re okay I can concentrate on this.

I love the way you phrase it: “This is the special sauce that the industry has been waiting for!” Well put!

Definitely! Without a doubt!

What is it about this new technology that made you decide to get involved with it?

Well, it’s new. I always try new things. And it stops forgery. We all work hard for our money; that’s life. If you want something like a signature and you’re paying all this money then why should it be a forgery? If you see the person actually signing it at least you know it’s authentic: you’ve seen that person signing it and they are there! To me that’s unbelievable!

Now, in what way(s) do you hope that IMAGE will allow you to reach out and interact with your fans in a more complete and satisfying way than without the help of this new technology?

Well, I usually sign face to face with a person. Sometimes I’m invited to these shows where you meet your fans and friends and they bring albums and everything else (to sign). But I think at this point Gary (Sohmers) who developed this really is concentrating on how this (IMAGE technology) is gonna work. I really don’t have the answer to that until I see where this is going.

What do you hope to accomplish using IMAGE? I know that one of the things that you’ve stressed is the avoidance of forgeries, which is plaguing the music business…and every aspect of the Arts!

Well, there are two methods now: this new technology and seeing the person in person (face to face) whom you want the autograph from, and the photo of that person also. To me, those are the two so far that I advice people to do (when seeking an autograph).

It’s just amazing that this whole internet thing is happening, because it is the future. I think it’s gonna definitely stay on the table, and be here for a long time. It’s unbelievable!

Indeed, the future of celebrity fan engagement is arriving, thanks to the genius of its creator: IMAGE founder Gary Sohmers. Best known as “The King of Pop Culture” Sohmers has appeared for 13 seasons as an appraiser on PBS’ Antiques Roadshow. 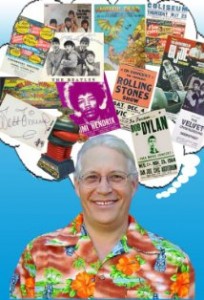 “The King of Pop Culture”, IMAGE founder Gary Sohmers is bringing Rock music memorabilia collecting to a high-tech, singularly innovative level that collectors are sure to delight in starting this month. Photo courtesy of PBS Broadcasting. Copyright 2012.

Gary Sohmers: “I invented this because you can eyewitness history and it’s guaranteed authentic, with video documentation. Without IMAGE technology, Marky Ramone would never have the opportunity to call his fans personally, and certainly not with the simultaneous gift of a download to share with friends.

Just think about the bragging rights of having Marky Ramone say ‘Gabba Gabba Happy Holiday’ to them! You get the video phone call, the bragging rights, and a valuable object with guaranteed video authenticity. This is an object that not only will be appreciated by anyone, but by that special person. And it will only appreciate in value!”

As the saying goes: “In Rock, image (spelled I-M-A-G-E) is everything, lol.

An IMAGE Personal Experience is a face-to-face audio-visual encounter through the Internet, which enables you to see rock music artists signing your pre-purchased item. It includes an overhead camera (as picture-in-picture) capturing the signing  live as it happens. This video is then sent to you on a USB flash drive with your item as indisputable authenticity, along with a video phone call (if you provide a video phone number). In addition, a download of your Personal Experience is sent to you by email.

More on Marky Ramone at www.MarkyRamone.com

More on IMAGE at www.IMAGEMeetandGreet.com 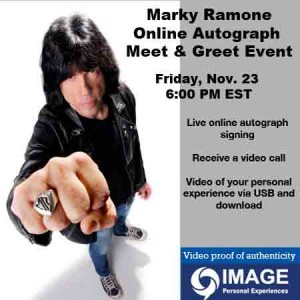 A native of Southern California, Shirley Peña began her career as a music journalist almost twenty years ago, writing for her websites "Stars In My Eyes: the Girlhowdy Website" and "La Raza Rock!" and progressed to creating various fan sites on Yahoo, including the first for New Zealand singer/songwriter Tim Finn. From there, she became a free agent, arranging online interviews for Yahoo fan clubs with various music artists (Andy White, John Crawford, Debora Iyall, John Easdale, etc.). She also lent her support in creating and moderating a number of Yahoo fan clubs for various music artists from the 1990s-today. As a music journalist, Shirley Peña has contributed to a number of magazines (both hard copy and online), among them: Goldmine, American Songwriter, Classic Drummer Magazine and UK-based Keyboard Player (where she was a principal journalist). A self-confessed "fanatic" of 1960s "British Invasion" bands, Classic Rock and nostalgic "Old Hollywood ", she also keeps her finger on the pulse of current trends in music, with a keen eye for up and coming artists of special merit. Shirley Peña loves Los Angeles, and is thrilled to join the writing staff of The Los Angeles Beat!
View all posts by Shirley Pena →
This entry was posted in Events, Upcoming Events, Videos and tagged Gary Sohmers, IMAGE, Marky Ramone, rock music memorabilia. Bookmark the permalink.