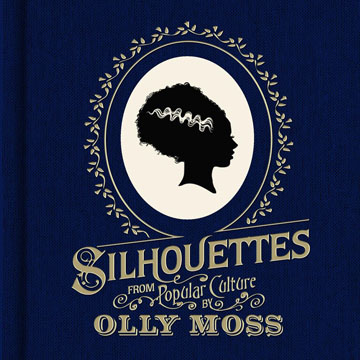 British artist Olly Moss has released a book called Silhouettes From Popular Culture, featuring his paper cut series. It’s a collection of Victorian-style silhouettes of pop culture figures, and since there are no titles or key, the fun is in trying to guess who everyone is. They range from the obvious, like Toy Story’s Woody and Buzz or Boba Fett, to the more difficult to determine, like the cast of Saved By The Bell. I only figured out the latter because of AC Slater’s hair!

The silhouettes often feature a touch of white here and there, such as Mary Poppins’s collar or Richie Tenenbaum’s tennis headband, or even red, as in the rose on the Godfather’s lapel or the “flesh wound” on the Monty Python knight. These touches of color add a lot to the characterization, and are sometimes the identifying factor, but Moss’s skill at rendering actors’ profiles can’t be denied. It’s amazing that someone like Kurt Russell can pop out from the page just from his features. I’m not even sure what character he’s portraying in that particular silhouette but it’s obviously him.

Simone Snaith writes young adult and fantasy novels, and sings in the band Turning Violet. A fan of scifi, fantasy, the supernatural and most things from the '80s, she enjoys reviewing music, books and movies. You can read about her own books at simonesnaith.com.
View all posts by Simone Snaith →
This entry was posted in Art, Books, Miscellanious and tagged art, coffee table books, olly moss, paper cutouts, pop culture, silhouettes. Bookmark the permalink.