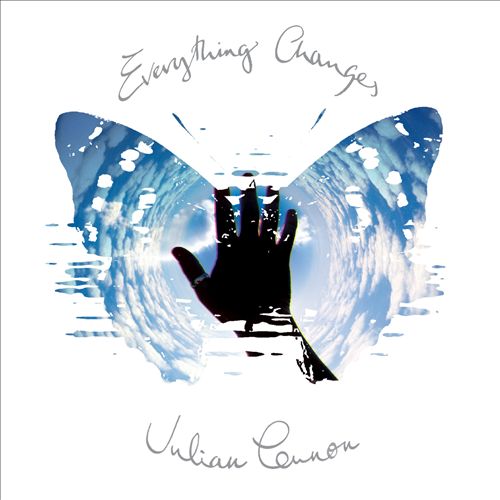 On June 14, a launch party for Julian Lennon‘s new album “Everything Changes,” along with an exhibit of his photography, was held at the Morrison Hotel Gallery. The gallery is located in a small room adjoining the lobby of the prestigious Sunset Marquis Hotel in West Hollywood. Guests from the media and music industry crowded into the gallery, spilling out into the lobby and onto the patio outside, where the new album played over the speakers (drowned out by loud chatter).

As my husband Dave and I slid our way through the crowd, we spotted quite a few people (mostly overly-tanned, middle-aged rocker types) who looked familiar but whose names we couldn’t place. KCRW’s Gary Calamar told us that, sadly, we had just missed Steven Tyler (I’m not a celebrity chaser, but I would have been thrilled to have seen the colorful rocker in the flesh.). We did spot white-haired Ian McLagan, keyboardist for the Small Faces; I wanted to go up to him and tell him how much I loved his keyboard playing, but decided to leave him alone to nurse his drink. (Speaking of drinks – just a quick, irrelevant aside to note that the wine being served was terrible. Shouldn’t a swanky place like the Sunset Marquis provide something that tastes better than Two Buck Chuck?)

But this is starting to reading too much like a gossip column, so let’s get to the main subject: Julian Lennon. While standing outside on the cool patio to get a breath of fresh air, my eyes followed a horde of photographers, and I was then able to spot Lennon. Hair cut short nowadays, he is a young 50; the resemblance to his father is often noted, but he’s also inherited his beautiful mother Cynthia‘s high cheekbones. As soon as the horde of photographers dispersed and he retreated to the lobby, I walked up to him and said, “I just wanted to congratulate you on your latest album.” He was charming and gracious, pointing at his cheek for me to kiss it. Naturally, I did.( Having had a huge crush on Julian years ago in my youth, it was a giddy moment for me; hubby Dave was amused and stood by patiently, grinning.)

Lennon’s photography is impressive, and not just in a rock-star-doing-something-on-the-side sort of way; viewed objectively, without the shackles of rock royalty attached to it, it stands on its own. It makes sense that many of his subjects are rock musicians, as he was born into that world; however, it’s not the subjects, but the way in which they’re captured, that make these black and white photographs so striking. A sparse photograph of The Edge, back turned towards the camera, wearing a black knit hat, stands in front of a white board in which “Wake Up and Dream” has been written in black marker; a tough, bald, tattooed, sunglasses-wearing Jason Bonham, arms folded, sits in front of his drum gear;  ZZ Top’s Billy Gibbons rocks out on guitar, in all his bearded glory. (One photo included on Julian’s website, not for sale, is entitled “Someone To Look Up To.” Bono, wearing his trademark sunglasses, sits smiling in contemplation in the studio, leaning forward, hands clasped. Hanging on the wall behind him is an early photo of John Lennon, in leather jacket and greased-back pompadour; the viewer quickly realizes that the “someone to look up to” is not Bono.) Gritty black-and-white photographs portray various managers, producers and roadies, sitting in rock clubs amidst band posters or standing on street corners. In contrast to the rock photos are Lennon’s ethereal color portraits: clouds, oceans, mountains; they’re not as bold as the black and white photos, but they do capture the calm majesty of these scenes.

Though it was previously released in 2011, “Everything Changes” is being touted as Lennon’s first album in 15 years (it includes additional tracks not on the 2011 release). Produced by Lennon and Grant Ransom, it features performances by Steven Tyler as well as producer/musician Peter Vettese (who has played keyboards with artists as diverse as Jethro Tull and the Pet Shop Boys). Collaborators include Gregory Darling, Justin Clayton and Guy Platt. Compared with 1984’s “Valotte,” Lennon’s most well-known album, the listener finds less immediately-catchy pop hooks and more of an overall lush, haunting sound, that is modern without catering specifically to any current trends.

The haunting opening track, “Everything Changes,” could be a mid-tempo track by English band, Elbow. Beginning with a simple melodic piano line, the minimal string arrangement helps to slowly build the song in dynamics, without overtaking it. “Someday,” featuring Steven Tyler, is one of the album’s strongest tracks, with an Indian-influenced string line (think “Within You Without You.”). Starting off with the familiar line “how does it feel to be one of the beautiful people,” from “Baby You’re a Rich Man,” Julian borrows the hook from his dad in a way that’s fun and inventive, incorporating it into an a capella round at the end of the song.

Lennon’s early work is evoked on the piano-driven ballad “Lookin’ 4 Love.” Lyrically, it’s one of the more direct songs on the album, as Lennon expresses a painful yearning to be with that special someone: “I’m looking for love / but I’m looking in all the wrong places / Oh God from above / can’t you help me see through all of these faces?” “Just For You” begins as subdued and understated, then explodes into a powerful and passionate chorus: “I’ve talked to the Virgin Mary / prayed to the Holy Ghost / come with a bowl of sapphire / for the one I love the most.” “Disconnected” continues with the album’s general theme of spirituality and oneness: “Cuz I believe / that everyone’s the same / cuz we’re all so disconnected / But I have realized / every moment there’s a sign / hidden in the rhythm of the mind / that guides us all to where we ought to be.”

Fans of The Left Banke and Revolver-era Beatles might be drawn to the minimal strange quartet/acoustic guitar arrangement of the lovely “In Between.”  “Beautiful” is a touching eulogy for a departed loved one, a piano ballad somewhat reminiscent of ELO, without the bombast: “You were so beautiful / the love you left behind will carry on / you gave your heart and soul to everyone.”

Overall, Julian’s album has a gentle, comforting and familiar tone, both musically and lyrically. If one is expecting a work with an innovative edge, both sonically and thematically, they’ll be disappointed. But anyone who recalls “Valotte” will remember it as a pleasant album of memorable pop songs; heartfelt, not lightweight and fluffy, but also not breaking any new ground. “Everything Changes” also does not break any new ground, and that’s okay. It’s a mature album, focusing more on a holistic world view and less on romantic relationships, the stuff pop songs are made of. Julian’s philosophical lyrics of togetherness, change and love may sound a bit trite to the more cynical among us, but as a man who has made philanthropy one of the focal points of his life (The White Feather Foundation is just one of his charities), he sings these anthems with emotion and conviction.

It’s fair to say that Julian Lennon, as the son of a much-revered music legend, has had a very unusual life, and has often been subject to unfair comparisons; however, he has emerged through this storm older, wiser and with his individuality intact. His foray into the world of photography is inspiring, as well as the music he continues to create; both in the visual art world as well as music, Lennon has made his own mark.

Carolyn Soyars is a freelance writter/blogger and musician, who performs under the name Carolyn Edwards. She has played with such critically acclaimed bands as 3D Picnic and The Negro Problem, and performs traditional folk music with her husband, Dave Soyars. For more info., see www.carolynsoyars.com for writing, and www.carolynedwards.com for music.
View all posts by Carolyn Soyars →
This entry was posted in Art, Miscellanious, Music and tagged art opening, Carolyn Edwards, Carolyn Soyars, Cynthia Lennon, John Lennon, Julian Lennon, morrison hotel gallery, The Beatles. Bookmark the permalink.