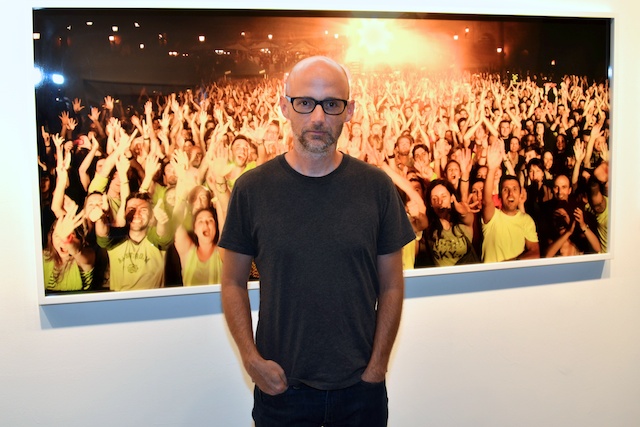 Photo by Billy Bennight for The Los Angeles Beat

I met Moby for the first time for Destroyed opening at Kopeikin Gallery roughly 2 years ago. He had some interesting takes in his photographic work. Most were shot of his fan from the stage he was performing from in different locations all over the world. But there were others that featured photographs architecture from unusual and interesting vantage points from his hotel windows in different countries he visited. I found these a little more interesting, because it more obviously came from a personal interest of his; although, the fan photos had a striking quality about them, as well. 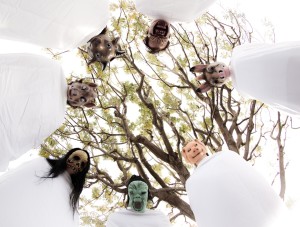 Moby debuting his latest work at Project Gallery on Friday. The new photographic work by Moby is called Innocents and follows his last photographic exhibition Destroyed and in a way, continues the conversation from the previous theme. The quote from Innocents’s press release, says, “As everyone knows, the apocalypse happened in December 2012 and the world changed fairly drastically. On the surface, and for the most part, life appears normal, the significant and bizarre shifts lurking but barely perceptible. This is the premise for Innocents, Moby’s created documentary evidence of the cults of Innocents.” Moby moved from New York in 2010 to Los Angeles. He has publicly stated that he loves Los Angeles and he’s consistently advocating this love to his New York friends and us all. An interesting quote I read from Moby’s Op-Ed piece, “Moby: Los Angeles, The First City of the Apocalypse” says, “L.A has both invented and perfected that strange balance between the suburban and the apocalyptic.” Moby’s interest in the history of the Hollywood Hills has been a part of the focus of Innocents direction we’ll see Friday. 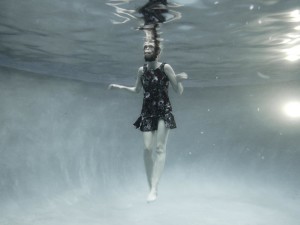 Innocents portrays Moby’s interest in cults and the passion and extremes pursued for personal reinvention. This desire for personal invention is the foundation of creativity. I believe Moby is referring to this when he speaks of Los Angeles being a great place for creatives and creativity. It’s his opinion that New York has become so over priced that artist and creatives can no longer survive, let alone prosper there. He thinks Los Angles holds great creative possibilities. In fact, Moby’s own artistic reinvention as a photographer has been birthed here in LA. Innocent’s lush and ominous large-scaled photographs try to make sense of the apocalypse Moby speaks of. Moby’s photographic conversation is portrayed in garish color of individuals and groups wearing white robes and animal masks, while it illuminate’s the feeling the cultish nature of the creative experience, its exploration and its expression. Innocents comes from a personal perspective of Moby’s interest, that first caught my eye, as I mentioned at the top of this article from his Destroyed exhibition at Kopeikin Gallery. I think Innocents will offer a greater focus on this perspective, as well as, reveal the sources his inspirations for creativity. I’m looking forward to a fascinating ride from Moby on Friday night. For further examination and exploration of Moby’s Innocents will be opening at Project Gallery on Friday February 21st from 7pm to 10pm. The exhibition will run through March 30th.

Billy Bennight is a writer, photographer and wardrobe stylist with expertise and years of experience in these disciplines. His musical youth started as a Punk Rocker and has expanded into exploring many genres of music, with an keen interest in art, fashion, photography and writing. He shoots celebrity events and red carpets for The Photo Access and ZUMA Press. He is a member of the Los Angeles Art Association. His images have been published in The Los Angeles Times, People Magazine, Wall Street Journal and Vanity Fair. He's very engaged in life. You can follow him on his Facebook page at: www.facebook.com/billybennightartist and on Instagram and Twitter @billybennight
View all posts by Billy Bennight →
This entry was posted in Art, Attractions, Events, News & Sports and tagged art, Billy Bennight, Destroyed, DJ, Kopeikin Gallery, Los Angeles, Moby, Musical Artist, New York, photography, Project Gallery, R&B, Rave. Bookmark the permalink.