Midnight: The Initiation of Sarah – Horror 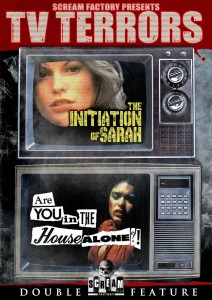 (1978, Shout! Factory) This small screen carbon of Carrie enjoys its own fan base among TV-movie devotees who appreciate its enthusiastic take on the Brian De Palma film’s high points and a game cast of (then) up-and-coming talent. Sarah (Kay Lenz) is a college wallflower and ritual punching bag for venomous campus A-type Morgan Fairchild. She finds refuge in a second-rate sorority filled with fellow misfits and overseen by Shelley Winters (in full Creepy-Crazy Old Lady gear), who recognizes the girl’s tremendous latent psychic powers. Fairchild’s hate campaign soon reaches critical mass, resulting in a showdown that, while lacking the firepower of the De Palma picture, delivers a satisfying level of supernatural nerd-revenge-rage. Prolific director Robert Day, who oversaw some of the better TV teleplays of the decade (Ritual of Evil, Murder by Natural Causes), shepherds the material and his young cast, which includes Robert Hays, Tony Bill, Morgan Brittany, Talia Balsam and Tisa (sister of Mia) Farrow, through their paces without wading into the camp end of the pool, which is more than can be said about the 2006 remake. The Shout! Factory’s DVD, titled TV Terrors, is a two-fer that also features Are You in the House Alone?, a 1978 thriller with Kathleen Beller, then a star on Dynasty, targeted by a sex maniac, and Dennis Quaid as her steady fella. 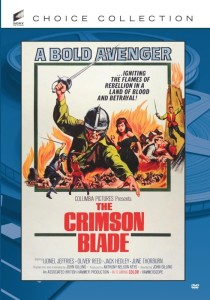 (1964, Sony Choice Collection) Britain’s Hammer Films, in one of its many if lesser-known efforts outside the horror genre, revamps the English Civil War as a moderately entertaining, slightly threadbare crossed-swords costume adventure with a dash of romance. Lionel Jeffries (Chitty Chitty Bang Bang) wears the black hat as the scurrilous Parliamentarian/”Roundhead” colonel who incurs the wrath of dashing Royalist Edward Beverly (Jack Hedley), who assails their forces Robin Hood-style in the name of King Charles II as “The Scarlet Blade” (the picture’s original title). A pre-fame Oliver Reed is his usual charming rough-boy self as Jeffries’ aide, who presses the boss’s daughter (June Thornburn) – a secret spy for the Royalists! – into either submitting to his swarthy charms or face execution. A host of familiar Hammer faces dot the supporting cast, including Michael Ripper, the studio’s go-to for fearful townspersons and suspicious bobbies, as a helpful gypsy, of all things. 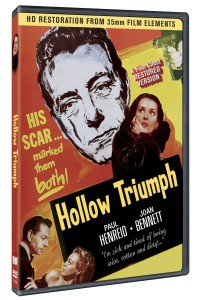 (1948, Film Chest) This modest thriller benefits greatly from Paul (Casablanca) Henreid’s classy presence, as well as a strong visual scheme by one of noir’s best cinematographers, John Alton (The Big Combo). Newly released from prison, Henreid – a former psychology student turned criminal – engineers a scheme to rob an illegal casino. The plan goes awry and Henreid goes on the lam, where he encounters a dentist (also Henreid) who is his exact double, save for a scar on his cheek (the picture’s UK title was The Scar). As the casino owner’s hoods (led by Jack Webb as a gunsel named “Bullseye”) close in, Henreid makes the unfortunate decision to impersonate the dentist, first by seducing the dentist’s lovelorn assistant (Joan Bennett) and then mutilating his own face to match the scar. From there, things go rapidly downhill, as they often do in noir, and the payoff has the bitter tinge of damned-if-you-do irony so typical of the genre. Late night habitués will find that Henreid’s final moments play even better in the unforgiving, early light of dawn. Film Chest’s remastered presentation is a marked improvement over previous TV and DVD incarnations. 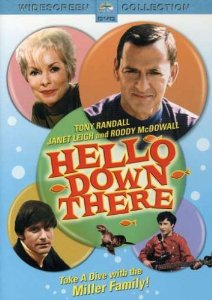 (1969, Warner Archives) Harmless family comedy with Tony Randall as a researcher for a development corporation who attempts to sell his boss (Jim Backus) on his idea for underwater housing idea by moving wife Janet Leigh and his kids into the octagonal, gadget-laden structure for 30 days. Accompanying them on the journey is daughter Kay Cole’s boyfriend (Richard Dreyfuss in purple slacks) and his brother (Lou Wagner), who front a rock band (the Green Onion) with Cole and her brother (Gary Tigerman). The picture, directed by Jack Arnold (Creature from the Black Lagoon) and produced by aquatic adventure specialist Ivan Tors (Flipper), divides its time between the domestic humor of Randall and Leigh adjusting to the peculiarities of their watery home (dolphins in the living room) and the band attracting the attention of a record mogul (Roddy McDowall, essentially reprising his Tycoon of Teen role from The Cool Ones) with their singles “Hello Little Goldfish” and “Glub Glub,” both charmingly naïve AM pop tunes (bubblegum fans, take note) penned by songwriting powerhouse Jeff Barry, fresh from scoring a No. 1 hit with the Archies’ “Sugar, Sugar” that same year. Icons of cool Harvey Lembeck (as a submarine radio operator) and Arnold Stang (as hapless assistant to Ken Berry) also factor into the proceedings, while Merv Griffin, as himself, gamely babbles groovy talk as he introduces the Green Onion to a national audience via his TV show.

Paul Gaita lives in Sherman Oaks, California with his lovely wife and daughter. He has written for The Los Angeles Times, LA Weekly, Variety and The Fix, among many other publications, and was a home video reviewer for Amazon.com from 1998 to 2014. He has interviewed countless entertainment figures from both the A and Z lists, but his favorites remain Elmore Leonard, Ray Bradbury and George Newall, who created both Schoolhouse Rock and the Hai Karate aftershave commercials. He once shared a Thanksgiving dinner with celebrity astrologer Joyce Jillson, and regrettably, still owes the late character actor Charles Napier a dollar.
View all posts by Paul Gaita →
This entry was posted in Movies. Bookmark the permalink.