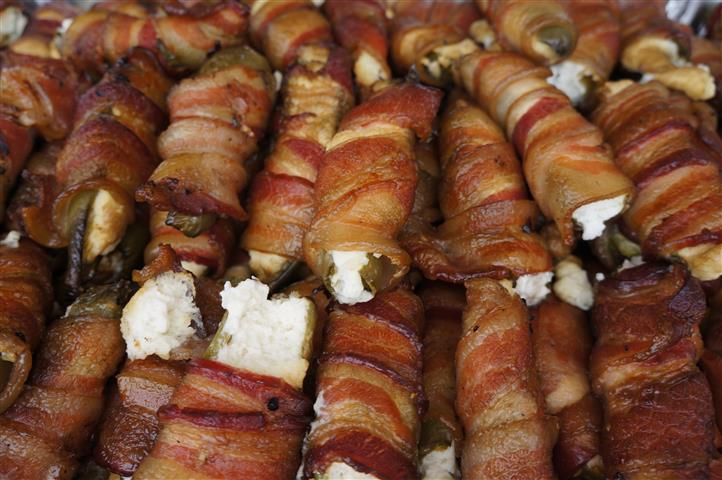 Yesterday, the Queen Mary in Long Beach hosted the Big Bite Bacon Fest. The sold out event was a sizzling success, with many great bacon-based foods, excellent craft beer, live music and more. Walking around the event, you could try bacon-wrapped hot dogs, bacon pop-tarts, bacon beans with ‘pig candy’ and even bacon cheesecake. Slater’s 50/50 was there, serving a line of hungry guests who were waiting for one of their signature cheeseburgers with a fried egg on top. Meanwhile, Farrell’s Ice Cream Parlors kept dishing out bacon-infused ice cream sundaes. 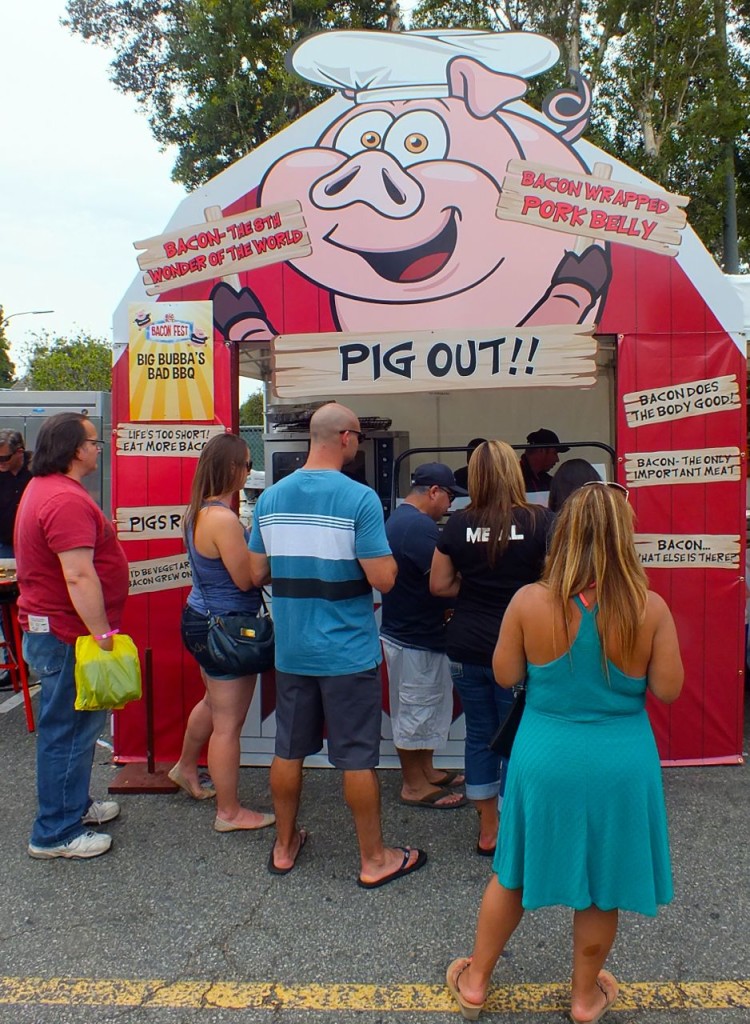 Who wouldn’t want to get food from a stand called ‘Pig Out’? Photo by Ed Simon for The Los Angeles Beat.

The smell of cooking bacon drifted over the Big Bite Bacon Fest from several of the boothes. BigMista’s Barbecue from Long Beach had a line for both the lunch and dinner sessions. BigMista’s had their smoker going right behind the tent, making bacon beans and their signature specialty, ‘pig candy’. The pig candy, which is bacon, covered with brown sugar, and spices, then smoked, drizzled with honey and smoked again, was a crowd favorite winning the coveted “People’s Choice” award from the crowd. The delicious ‘pig candy’ also won the event’s “Critics Award”.

While the crowd was enjoying their favorite bacon dishes, inside the Queen Mary, things were heating up as a panel of judges tasted dishes made for the Best Bacon Dish Awards competition. The judges consisted of Rahm Fama, chef and host of the Food Network’s ‘Meat and Potatoes’ show, Jean Trinh, food writer for the LAist and The Los Angeles Beat’s own Edward Simon. The two categories, Professional Division and Amateur Division, were mixed during the judging and presented as blind tastings, with only an identification number for the judges to use. With no idea who the chefs were, the dishes could be judged strictly on their own merit.

While the judging was going on, over at the Dia de los Puercos Savage Chefs Grub Truck, word had obviously spread about their food since thay had a long line of people waiting to try their goodies. At the window, their Borracho dogs were a popular item. The Borracho Dog is their version of the popular L.A. street dog, wrapped in bacon, deep fried and then put on a fresh-baked bolillo roll. Toppings included, onion, mayo and cotija cheese.

The other item that the Dia de los Puercos Grub truck had was their own unique ‘hog pocket’. Mike and Evan waited in line for the chance to try one of the most popular items at the Fest. They were both so excited on their first bite that they both described it, saying “This ‘hog pocket is amazing!’. It’s crispy, there’s so much flavor, the peanut butter, the bacon, everything. The jelly…..I’m a big peanut butter fanatic. With the peanut butter being as warm and toasty as it is, that got me right there. And bacon, everybody loves bacon, who doesn’t love bacon? And I’m not even a big fan of jelly, but this is amazing. The brown sugar that is on top of it, everything it’s just that right mix of crispy, sweet, the tart from the jelly, it’s phenomenal!”. 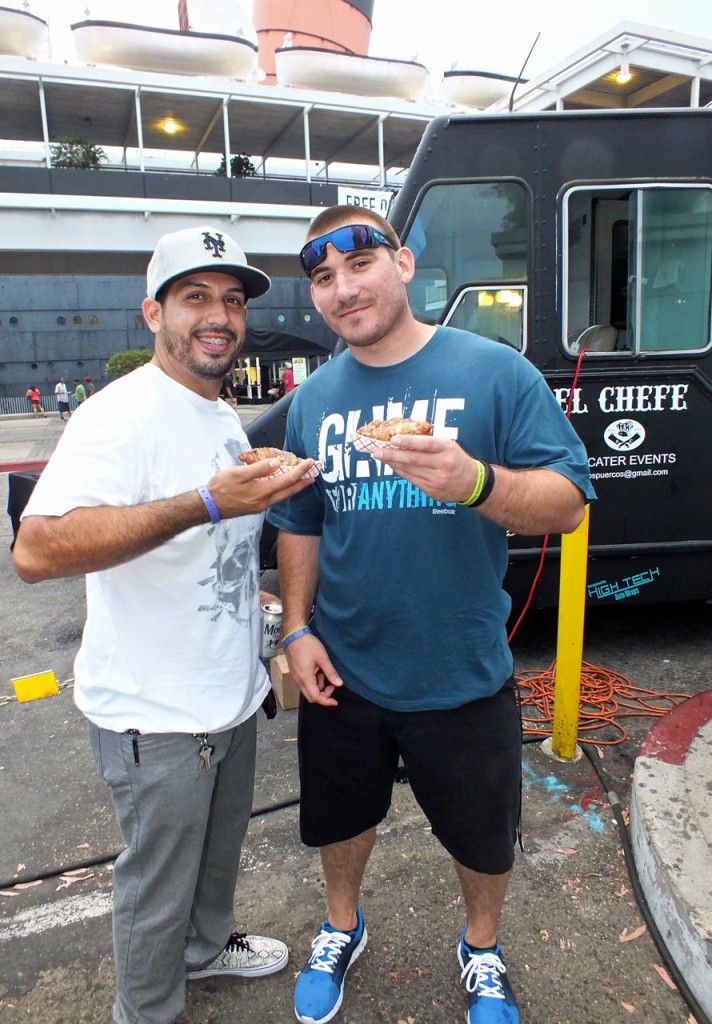 Lost Coast Brewery came down from Eureka to sample their beers. From the other end of the state, Sone Brewing make the trek up from San Diego so everyone could taste beer from what is becoming one of the state’s most popular breweries. Firestone-Walker, Deschutes and Saint Archer were some of the other breweries that provided delicious craft beers to the thirsty crowd.

At 7p.m., the crowd gathered around the stage as the cast of ALT 96.7 FM’s new morning show, the Woddy Show, hosted the results of the Big Bacon Dish Competition. In the Professional Division, Neil BigMista” Strawder and Rick Garcia of Dias de los Puercos tied for third place. Doa Nguyen took second place, wooing the judges with her delicious beef shortrib with bacon.

As the crowd waited, the first place winner was announced. Chef Hugo Miranda, from El Segundo’s Doubletree LAX East Grand Bar and Grille, took the judges by storm with his delicious Pork Belly Slider. Chef Hugo will go on the compete in the prestigious World Food Championship in Las Vegas. 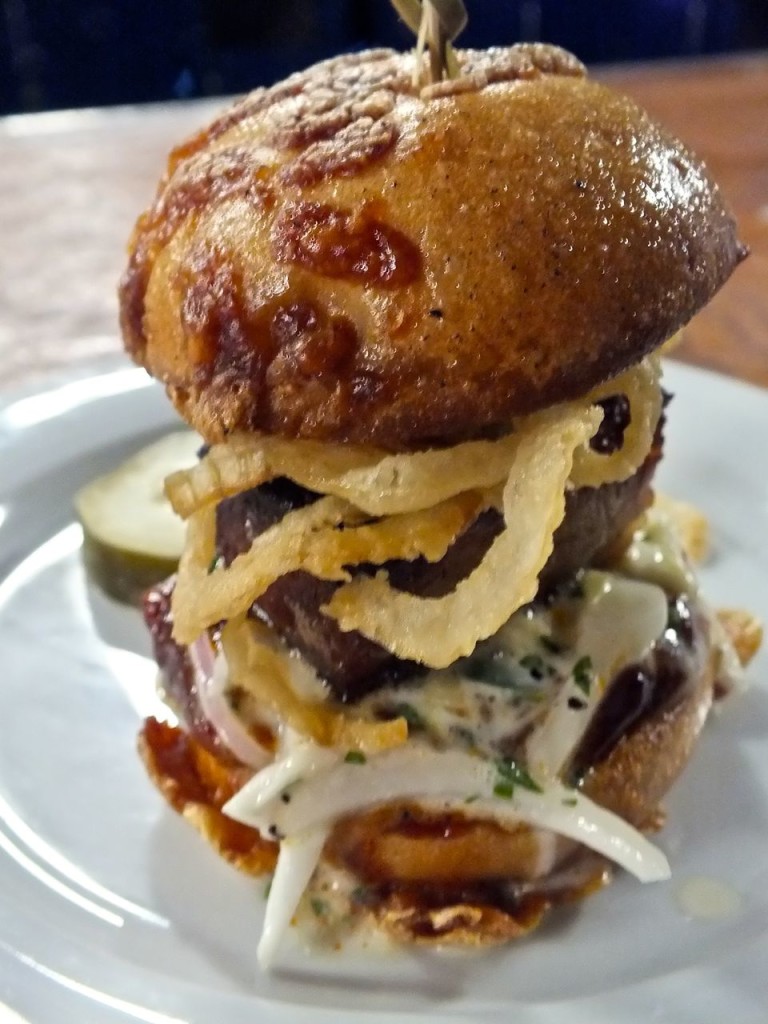 According to Chef Hugo, “My dish was pretty much pork belly. I mean, I have a belly, the pig has a belly, let’s enjoy it together! Pork belly, that meat is kind of fatty, tender, so it takes about four hours to cook. Prime time! I had some Dr. Pepper, I added this and this and ‘MAGIC!’. I did it, I made my own brioche bun that had jalapeño cheddar in it from scratch. I made it fresh today, this morning. Then I did smoked barbecue bacon chipotle barbecue sauce from scratch. Then I reheated everything I had with bacon lard. Touched it up, finished it, bacon everything. That was my creation, honestly. Then I did a jalapeño chipotle cole slaw. It was spicy and sweet; that was my magic throughout the whole dish”.

In the Amateur Division, Paul Burboa won first place for his Bacon Soup. The soup was rich and flavorful. Paul said, “I’ve been cooking most of my life in my kitchen. I used to cook with my grandmother growing up. I’ve always been an amateur, cooked just at home. I’ve never done anything professionally. My fiancee has always been trying to encourage me to try some competitions, so we decided to try this. And it worked out!”. 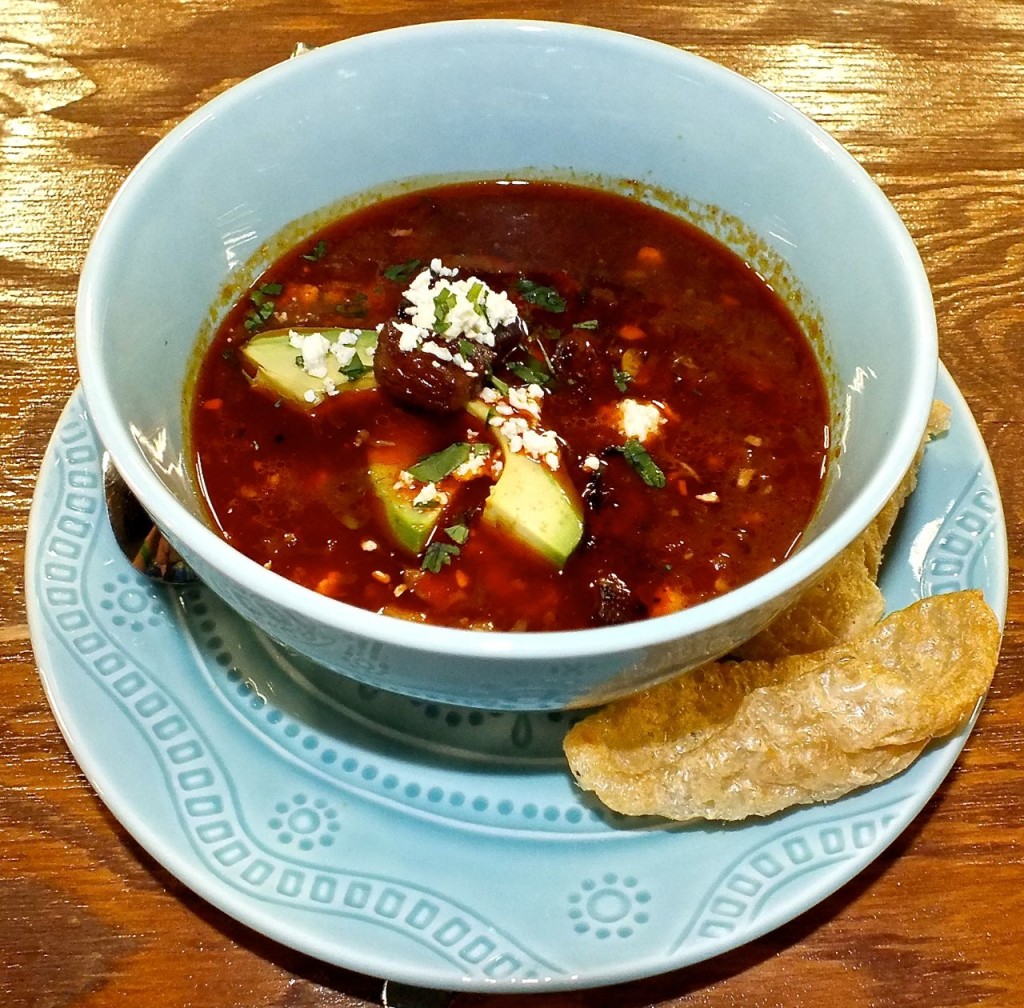 As a beautiful sunset was enjoyed by the Bacon Fest guests, the lines ended as many of the cooks ran out of food. No one went home hungry, however and smiles were on the faces of the guests as they headed towards the exit, with many of them wearing new “Get Porked” and “Come to the Dark Side with Bacon” shirts. With the first Big Bite Bacon Fest at the Queen Mary over, it was time for everyone to look forward to another Bacon Fest next year.

Ed is a native of Los Angeles who loves food and food cultures. Whether he's looking for the best ceviche in Colombia, the best poke in Hawaii, the best tequila in Jalisco or the best Taiwanese Beef Roll in Los Angeles, it's all good food! He also loves a good drink. He's had Mai Tais in Hawaii, Bourbon in Kentucky, Tequila in Mexico and Rum in Jamaica. His wine escapades have taken him to Napa, Sonoma, the Willamette Valley and the Santa Ynez Valley. And he's had beer all over the world! Music is another of Ed's passion, writing and interviewing many classic rock, rock and blues musicians. Getting the great stories of road experiences from them is a particular delight. Traveling also fits in with Ed's writing, exploring all over to find the most interesting places to visit, even in out of the way areas.
View all posts by Ed Simon →
This entry was posted in Events, Food and tagged Bacon, Big Bite Bacon Awards Competition, Big Bite Bacon Fest, dessert, Edward Simon, long beach, pork belly, Queen Mary. Bookmark the permalink.