Posted on September 4, 2014 by Carolyn Soyars 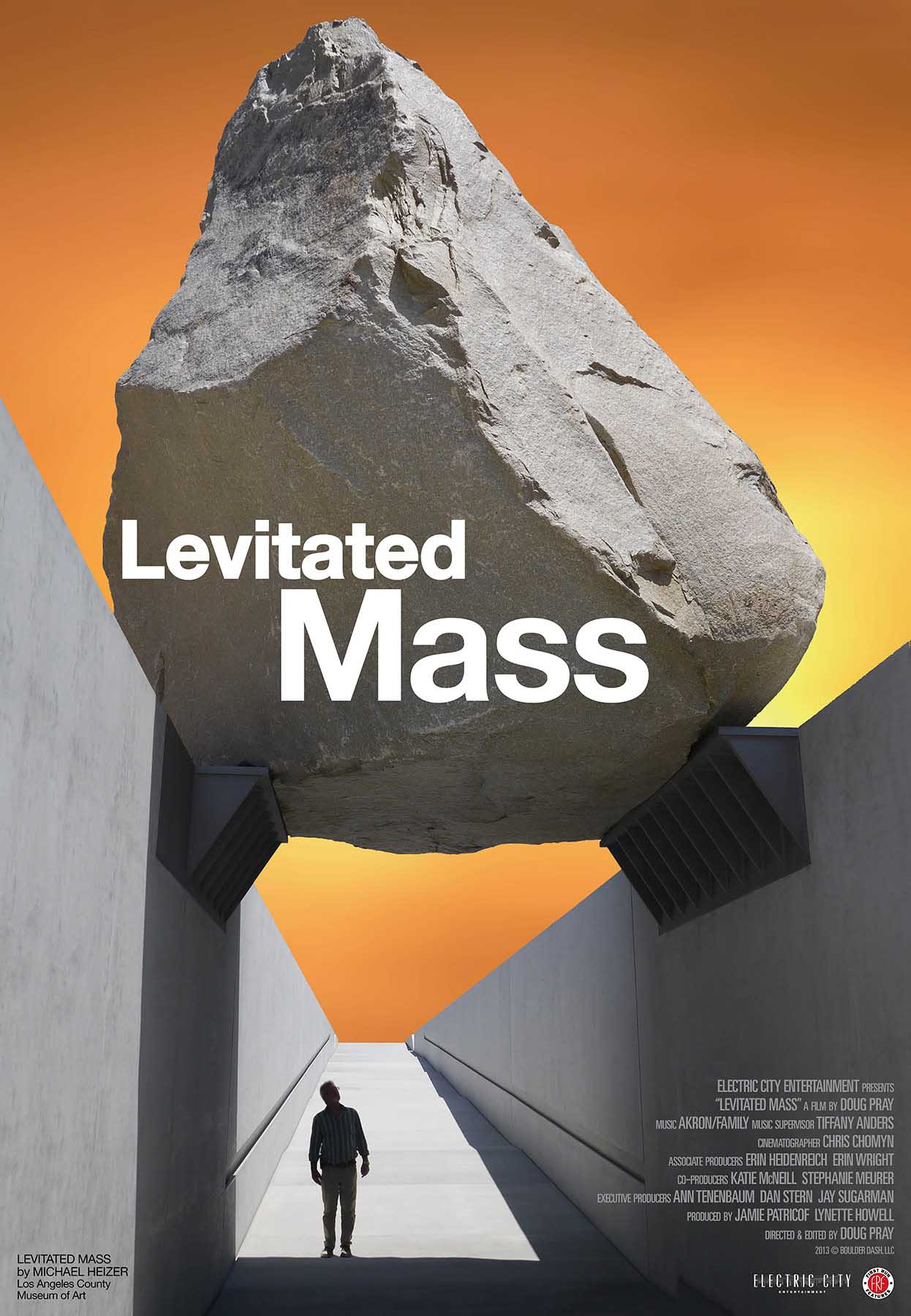 When my husband Dave and I lived in Los Angeles, we lived within walking distance of The Los Angeles County Museum of Art (LACMA). Although I wasn’t one of the hundreds of people who stayed awake until the wee hours of the morning to watch the arrival of an enormous granite boulder, it was incredibly exciting to be so close to the action. I was both fascinated and amused that the big rock, in the name of art, was creating such an upheaval and disrupting every day routines, and that the city streets were blocked for miles around just so that it could arrive safely at the museum. Even the biggest celebrity in Hollywood wouldn’t have received such preferential treatment. After the rock was safely deposited in the open space behind LACMA, a green tarp covered the fence surrounding it. One could occasionally catch a glance at the mythical rock through openings in the tarp, and wonder exactly what they were going to do with it.

“Levitated Mass” is Doug Pray’s documentary about Michael Heizer‘s monolithic artwork of the same name. The film mostly focuses on the gargantuan task of transporting the rock from a quarry in Riverside to its eventual home at LACMA, the logistics and planning involved, and the sheer spectacle of it as it was moved from city to city. It also explores the history of Heizer’s work, influential in the world of “land art.” Land art is created using natural material; the works are often on a grand scale, existing in open landscapes, left to erode over time (such as Heizer’s “Double Negative” in the Nevada desert, which is discussed briefly in the film).

For those of you not familiar with the controversial sculpture, “Levitated Mass” is an enormous rock which, in its present home at LACMA, appears to be precariously balanced above a walkway upon two concrete shelves. In fact, many months of meticulous planning and engineering skills were involved to ensure the 340-ton boulder would remain securely in place (earthquakes were of course a factor in the equation).

Michael Heizer originally came up with the concept for “Levitated Mass” in 1968; however, the crane being used to lift the 120-ton boulder broke, and the project was abandoned. He resumed the project after being contacted by the owner of a rock quarry in Riverside; Heizer had purchased rocks previously from the quarry, and had told the owner to let him know if he ever came upon a spectacular rock. After a rock blast leaves behind an impressive boulder, the owner contacts him. Upon viewing the rock, Heizer telephones LACMA director Michael Govan (who is interviewed extensively in the film and relays the story) from the airport: “I’ve found the most beautiful rock I’ve ever seen.”

With the help of Govan, the wheels are (literally) set in motion to transport the rock safely from Riverside to LACMA. More than two stories tall and weighing more than a 747 jet, transporting it over bridges would have been disastrous. A staggering amount of research is conducted; painstakingly detailed maps of city surface streets are reviewed; government and transportation officials become involved. Numerous permits are required, and of the 22 different cities involved along the 105-mile route, many officials are reluctant (some of whom are baffled as to why they their city should be turned upside down just to make way for a big rock). A utility route supervisor is assigned to accompany the truck to ensure that telephone wires won’t strike it during the move. Certain traffic signals and poles must be removed to make way for the custom-built tractor trailer and its precious cargo. It’s a massive undertaking, with hundreds of people involved in the planning and execution.

The spectacle of the granite boulder as it is transported on a 206-wheeled tractor trailer, lumbering slowly and carefully down surface streets, brings out thousands of observers, many waiting until dawn to catch a sight of it. There is glorious footage of the truck arriving in the faint early morning light, arrayed in flashing lights, overtaking entire streets as sleepy citizens line the sidewalks for a glance.

Several spectators are interviewed in the film; Pray edits some of the observers’ bewildered comments quickly together to amusing effect: “I hear it’s going to a museum.” “A rock? Why?” Some are suspicious of the motives behind the transport, dubious that the large, cloth-covered object, accompanied by flashing lights and a police escort, could simply be a big piece of granite intended for an art installation; conspiracy theories about covert military operations abound. Still others are confused (and/or annoyed) as to why a giant boulder would be considered art, since the artist didn’t technically sculpt it himself. (I joked to my husband that the boulder might be the largest example of “found art.”) .

Reactions to the rock range from anger, to the philosophical, to amusement and to the metaphysical. As it travels through South Central, one frustrated young man complains that people in his neighborhood are struggling to find work, yet they are expected to make way for a “10 million dollar rock;” a girl in the same neighborhood is elated that the rock was parked in front of her door: “Nothing ever happens in my neighborhood!”. In Ontario, a man proposes to his girlfriend in front of the rock. Another man is philosophical: “We’re living in a time where a lot of people feel jaded, and someone had the vision to say, ‘I want to take something so big and so massive, and put it in the middle of the Los Angeles basin . . . . everyone has this journey that we’re all on.” The city of Bixby Knolls decides to make a party out of it – with games (rock, scissors, paper), kids’ activities (rock paintings) and music (rock, naturally). And as it stops in front of a church in Carson, churchgoers view it as a spiritual sign fraught with religious significance. It’s as if the rock is a mirror in which one sees their own desires, dreams, fears and frustrations.

In the months following the arrival of the rock, Heizer lives in an airstream on the site at LACMA with his wife, overseeing the installation. He appears more like a construction worker than artist, wearing a hardhat, tools in hand, surveying the site.When the rock is finally hoisted onto the steel plates, it’s a nerve wracking moment, but the months of planning pays off: it fits perfectly.

Pray portrays the story behind “Levitated Mass” thoughtfully, skillfully and with good humor. I particularly appreciated that he didn’t just interview experts in the art world; rather, to get a balanced perspective, he interviews the owner of the quarry who noticed the rock to begin with, city officials and CHP officers, who were very much involved in transporting the rock safely, and people on the street who witnessed the transport. It might seem odd that the film doesn’t include an extensive interview with the artist himself, but this almost seems irrelevant; the sculpture itself makes a big enough statement. Heizer has said that the sculpture is meant to last 3,500 years. Unlike the officials in Lansing, MI who let Heizer’s work “This Equals That” fall sadly into disrepair, let’s hope the future generations of LACMA will continue to give “Levitated Mass” the respect and care it deserves.

Directed and edited by Doug Pray

For my husband Dave’s take on the film, go to https://thelosangelesbeat.com/2014/09/movie-review-levitated-mass/.

Carolyn Soyars is a freelance writter/blogger and musician, who performs under the name Carolyn Edwards. She has played with such critically acclaimed bands as 3D Picnic and The Negro Problem, and performs traditional folk music with her husband, Dave Soyars. For more info., see www.carolynsoyars.com for writing, and www.carolynedwards.com for music.
View all posts by Carolyn Soyars →
This entry was posted in Art, Miscellanious and tagged art, Carolyn Edwards, Carolyn Soyars, Film, LACMA, Levitated Mass. Bookmark the permalink.

One Response to Levitated Mass / A Documentary