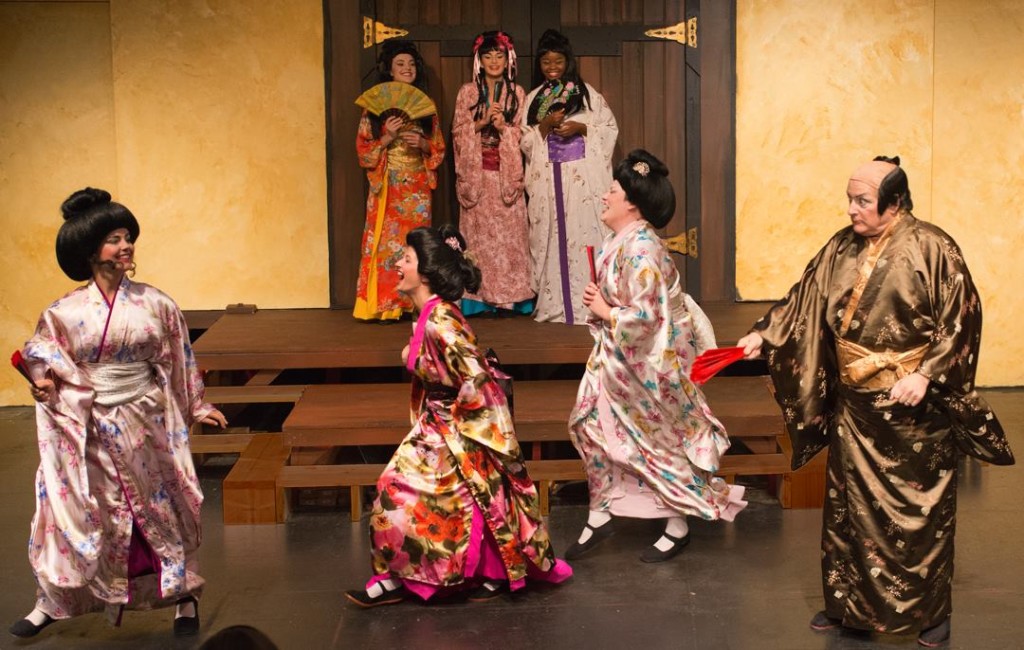 The Ventura County Gilbert & Sullivan Repertoire Company is presenting Gilbert & Sullivan’s most popular and most frequently globally produced operetta, The Mikado. Written in 1865 and set in an imaginary Japanese village, it provides a beautiful setting for Sir William S. Gilbert to once more lampoon the British aristocracy, political system and Victorian social mores set to the lush score of Sir Arthur Sullivan. The story of its creation may not be entirely true, but the claim is that one day an old Japanese sword that, for years, had been hanging on the wall of W.S. Gilbert’s study, fell down from its place. This incident directed his attention to Japan and provided the inspiration for the musical.

The town of Titipu hasn’t had an execution for a while and the Lord High Executioner (KoKo) is informed his head may soon be on the chopping block if the situation isn’t remedied. A dilemma ensues, because how can an Executioner execute himself? Along comes a wandering minstrel (Nanki Poo) who happens to be in love with KoKo’s ward (YumYum), who also happens to be engaged to KoKo. In the meantime, Nanki Poo is engaged to someone else (Katisha) and he’s the incognito son of the Mikado? Heads may roll, or just may spend some time in boiling oil.

The Mikado has been one of Gilbert and Sullivan’s most popular operettas. Monty Python even did a parody of it the famous song, “I’ve Got A Little List”, with Eric Idle writing additional lyrics to it. Many of the songs from the Mikado are classics of the genre and audiences still roll with laughter at Gilbert and Sullivan’s penchant for poking fun at British morals, sensibilities and institutions of the day through the “Japanese” characters.

The show is directed by Rebecca Pillsbury. Musical direction is by Music Direction by Zachary Spencer, with Choreography by Julie Bermel. The Ventura County Gilbert and Sullivan Repertoire Company has been giving fresh new interpretations to these classic operettas since 2006. The Mikado opened to rave reviews on Friday, October 3rd, and runs Friday and Saturday evenings, and Sunday afternoons, through October 26th. For tickets please call the box office at 805-381-1246 or buy on-line. For more information please call 804-491-6103.

Ed is a native of Los Angeles who loves food and food cultures. Whether he's looking for the best ceviche in Colombia, the best poke in Hawaii, the best tequila in Jalisco or the best Taiwanese Beef Roll in Los Angeles, it's all good food! He also loves a good drink. He's had Mai Tais in Hawaii, Bourbon in Kentucky, Tequila in Mexico and Rum in Jamaica. His wine escapades have taken him to Napa, Sonoma, the Willamette Valley and the Santa Ynez Valley. And he's had beer all over the world! Music is another of Ed's passion, writing and interviewing many classic rock, rock and blues musicians. Getting the great stories of road experiences from them is a particular delight. Traveling also fits in with Ed's writing, exploring all over to find the most interesting places to visit, even in out of the way areas.
View all posts by Ed Simon →
This entry was posted in Miscellanious, Music, Theater and tagged Edward Simon, Gilbert and Sullivan, Hillcrest Center For The Arts, Mikado, Theatre on the Hill, Thousand Oaks, VCGSRC, Ventura County, Ventura County Gilbert and Sullivan Repertoire Company. Bookmark the permalink.