Ragtime: The Musical Sings Its Way Through a Tumultuous Period in American History 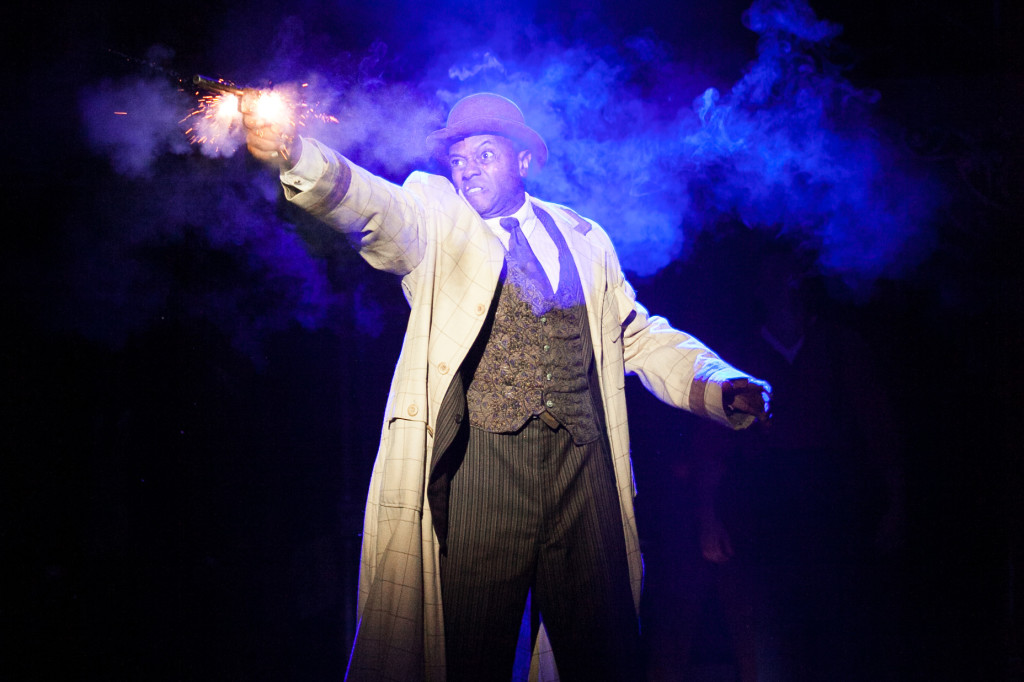 3-D Theatrical’s production of Ragtime: The Musical, currently at the Plummer Theater in Fullerton and then followed by an engagement through November 9 at the  Redondo Beach Performing Arts Center, gives theatergoers a chance to see a lesser-known musical performed by an excellent company. The story revolves around three families, culturally and socially diverse, and shows their interaction, attitudes, struggles and conflicts with themselves, within themselves and with each other during a critical era in American history, the time between 1895 and the end of World War I, in 1918. This period of time was known as the Ragtime Era.

E. L. Doctorow has always been an author with a magnificent touch for Americana stories. Novels (and movies) like Billy Bathgate give an accurate, personal portayal of events in the early 1900’s. In the original book for Ragtime, he did the same thing, taking a serious look at America in the period just after the turn of the century and before World War I. By combining real historical personalities along with his own characters, the book makes an interesting portrait of the time. 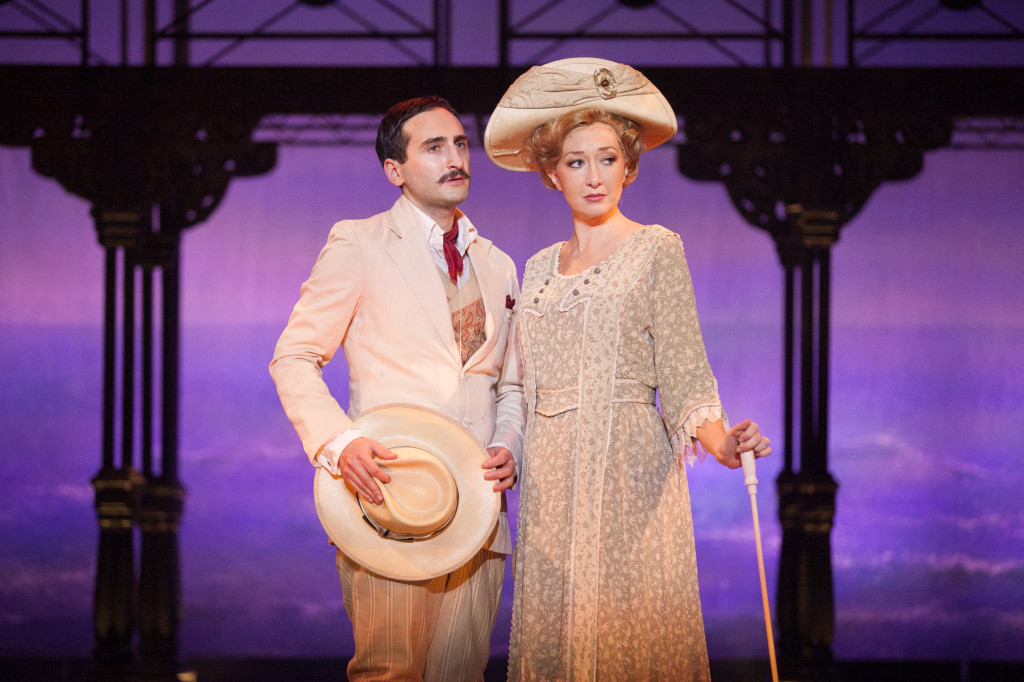 The amazing thing is how well this serious material was converted into a musical. The original writer, producer and musical team did a stupendous job, culminating in the show being nominated for 13 Tony Awards and wins for several including Best Original Score, Best Musical from a Book and Best Orchestration. Meanwhile, the Drama Desk Awards gave it a win in both Outstanding Musical and Outstanding Book of a Musical. Kudos really goes to the 3-D Theatrical team also, who was able to present the musical in just the right tone, seamlessly going from drama to musical without (literally) missing a beat. The ensemble acting, dancing and singing was spot-on and the main characters believable.

The first family the show introduces is really never identified by a name, except as ‘father’, ‘grandfather’, ‘mother’ and ‘elder brother’.  They are definitely from the wealthy class, with all the accoutrements of a rich family in that era. Coming into their lives next is Sarah, a unmarried black woman with a baby boy that ‘Mother’ takes on as a project and her responsibility after finding the boy left in her garden.

The other side of Sarah’s life is Coalhouse Walker Jr., a talented black musician trying to work his way out of Harlem, and also away from the prejudices against Negros at that time, by being the best he can be, taking on the white man’s affectations and showing he can be just as good as anyone else. As a musician, he plays piano and on it, a new kind of music—-Ragtime. As the musical progresses, he also shows his desire to become a responsible family man provider of a stable influence on both Sarah and Edgar.

Finally, the last family is introduced. Tateh and his daughter are Jewish-East European refugees leaving the horrors, pogroms, prejudice and attitudes towards Jews at that time. He only wants some freedom and to make a small living for himself and his daughter. The way up for him is to see cards with actors of the day on them. Enough of the cards can be grouped together and then it will even look like the actors move! 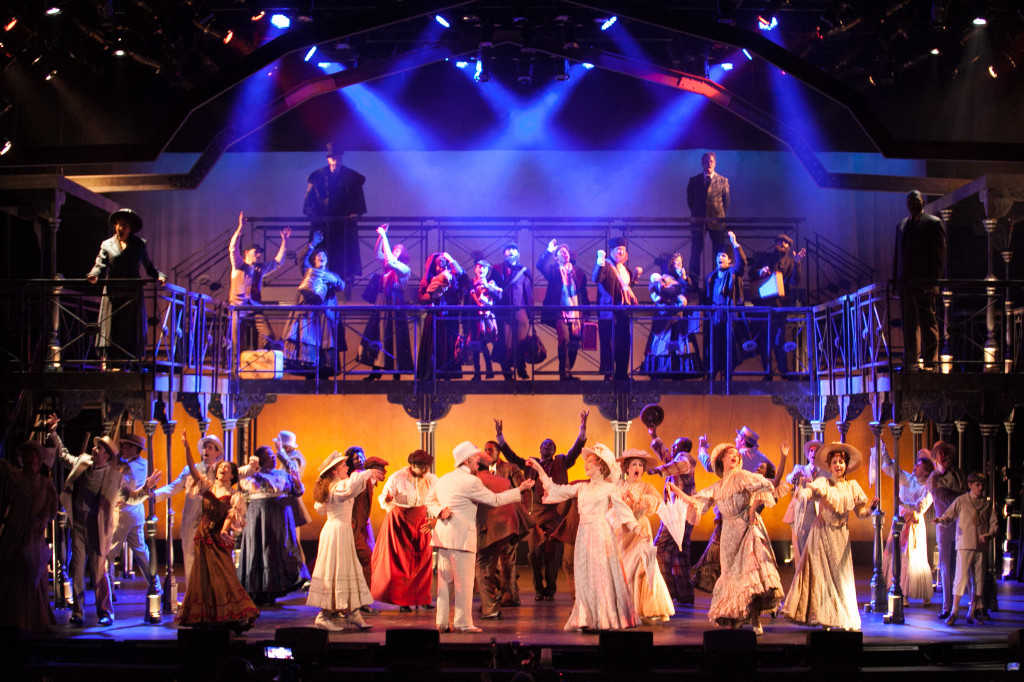 From the very opening number, ‘Ragtime‘, one can tell the professionalism of the company. Coalhouse is introduced playing his piano and singing and the ensemble joins in singing and dancing. The company is precise in their harmonies and the numbers well-choreographed. And that is why this particular production is so successful; instead of the over-the-top performances that are often given to shows like this, 3-D Theatrical’s performance seems effortless in its blending of the music, song and dialogue into a realistic portrayal of the era. Speaking of that, the set changes, done under dimmed lights, are very effective in using a basic backdrop with a variety of stepped balconies, decks and bridges to denote the different types of locations in the show. Praise also goes to Production Stage Manager Nicole Wessel and Assistant Stage manager David Jordan Nestor for the changes, done in a way that they do not distract from the show but actually seem to add to the energy of it, much as if an elevated train was going by.

The key characters are all excellent choices. Christanna Rowader, as Mother, gives a strong performance, not only showing a powerful voice but one that has good range. You can feel her growth as a woman and a family member as she asserts herself through her role in bringing both baby Edgar into the family home as well as assuming responsibility for bringing in the baby’s unwed mother, Sarah, too. Mother’s Younger Brother, a typical sheltered preppy style son played by Tyler Miclean, also is successful in showing his growth from pampered rich kid to an adult who really cares about everyone in the world and not just himself.

Probably the most impressive character in Ragtime: The Musical is that of Coalhouse Walker, Jr. An obviously talented musician, Coalhouse is becoming very successful too and not just in music. He’s got a beautiful new Ford Model T, which like any new car owner, he polishes and cleans off every dirty spot he sees on it. His intelligence is apparent too, between his cultured speech, his quoting of people such as Booker T. Washington and his manner of dress and grooming. He is the epitome of the side of the black experience in the early 1900’s that does not want to be treated as second class or worse citizens any more. Rufus Bonds, Jr. seems to be a natural for this role, with not only a great range of emotions and great acting ability but a rich, powerful voice that filled the theater. His Broadway performance background shows well, with his ability to pull the needed emotions out of the audience. 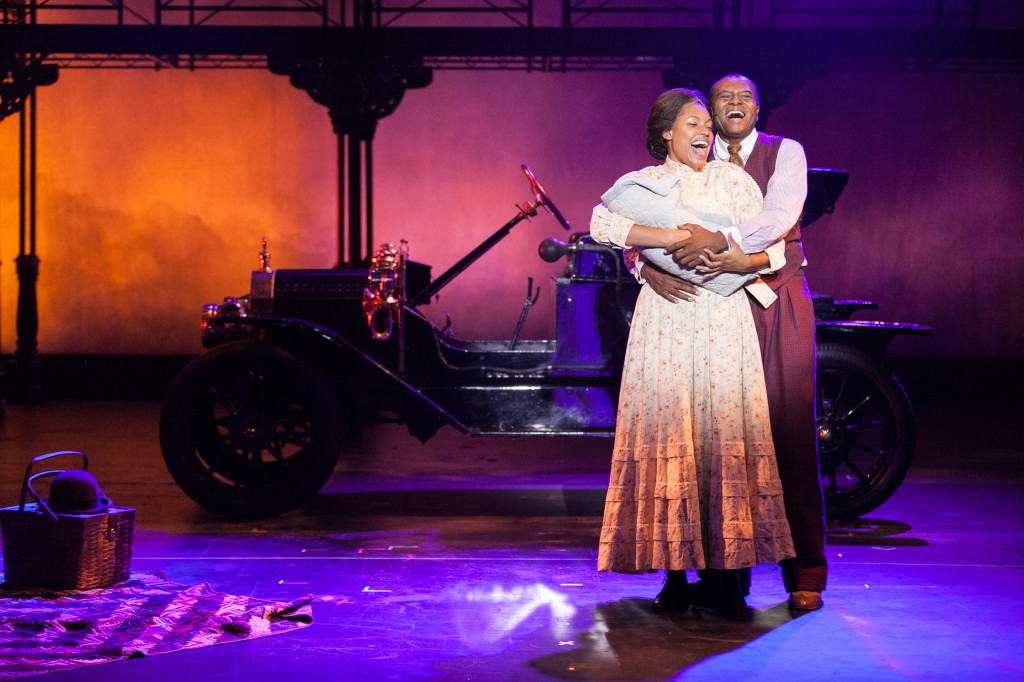 One of the ingenious parts of Ragtime: The Musical is the use of historical characters in the show. People like Emma Goldman, responsible for so much of the improvement in the clothing manufacturing sweatshops, Henry Ford and J.P. Morgan, Booker T. Washington, the man Coalhouse idolizes, Harry Houdini the magician and Admiral Peary, the polar explorer, all add an element of real history to Ragtime: The Musical. A pivotal role is performed by Jeanette Dawson as Evelyn Nesbit, probably on of the earliest of the women who were more famous for what they did and who they did it with than any true talent. At the center of several scandals, including the Stanford White murder scandal, Jeanette performs perfectly as smart, manipulating, irresistible and able to twist some of the most famous men of the day around her finger. It is a tough role to pull off but Ms. Dawson has it down perfectly.

Tateh, The final key in the triumvirate of Ragtime’s story of success and tribulation in America, demonstrates what it needed to become a citizen then and why immigrants around the late 1800’s and early 1900’s tried so hard to assimilate. Surviving his earlier life and the trip across to Ellis Island, the port of access for any of the immigrants in that period, Tateh still has to deal with protecting his daughter from prejudice and men who see her as a commodity. Tateh has a dream; even a wild idea, and he pursues to to an end that will make him a pioneer in an upcoming business that is one of the few areas where Jews are welcomed. Gary Patent covers the role, evoking thoughts of Mandy Patinkin, who created the role in the original movie version. His singing voice is good, his vocal affectations even better and what seems to be a natural sense of comedic timing brings a lot to this key role.

Ed is a native of Los Angeles who loves food and food cultures. Whether he's looking for the best ceviche in Colombia, the best poke in Hawaii, the best tequila in Jalisco or the best Taiwanese Beef Roll in Los Angeles, it's all good food! He also loves a good drink. He's had Mai Tais in Hawaii, Bourbon in Kentucky, Tequila in Mexico and Rum in Jamaica. His wine escapades have taken him to Napa, Sonoma, the Willamette Valley and the Santa Ynez Valley. And he's had beer all over the world! Music is another of Ed's passion, writing and interviewing many classic rock, rock and blues musicians. Getting the great stories of road experiences from them is a particular delight. Traveling also fits in with Ed's writing, exploring all over to find the most interesting places to visit, even in out of the way areas.
View all posts by Ed Simon →
This entry was posted in Books, Events, Miscellanious, Theater, Upcoming Events and tagged 3-D Theatricals, Edward Simon, Fullerton, Musical, Plummer Auditorium, Ragtime, Ragtime: The Musical, Redondo Beach, theater. Bookmark the permalink.